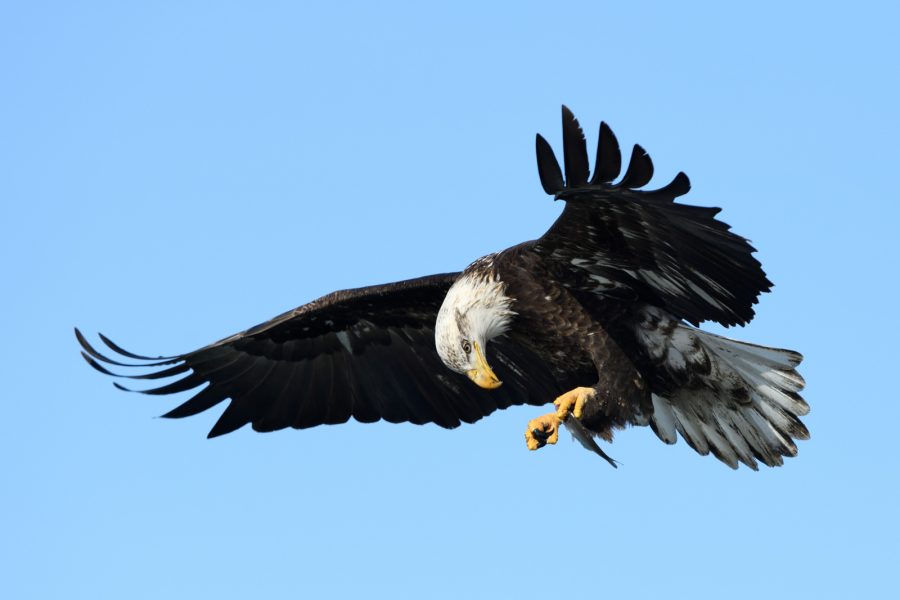 Native to North America, bald eagles have been featured on everything from currency and statues to mascots of professional sports teams. So, it’s no surprise that photographing bald eagles is a must for many nature photographers.

Deeply ingrained in the culture, history, and minds of Americans, the species gained popularity long before Europeans settled the continent. For thousands of years, the bald eagle has been revered as a symbol of strength, courage, and focus by the Indigenous peoples of the Americas.

Photographers have plenty of reasons to fall in love with America’s national bird. Their regal stature and menacing gaze are enough to attract many, but it’s the bald eagle’s predatory nature that truly makes them a remarkable subject to photograph.

Both powerful and elegant, the bald eagle’s deliberate motions in flight can be as surprising as they are effective. They use every ounce of body weight in combination with their vast, two-meter wingspan to capture their prey. This display is a pure delight for photographers.

The images from my first few attempts were so embarrassing that they have been hidden from existence long ago. I failed to understand how challenging this subject can be. The light was off, the backgrounds were terrible, and I didn’t understand how critical choosing the right location was to the process.

As with most subjects, it’s the thrill of the chase that makes it rewarding. Let’s review some fundamentals to understand how they relate to photographing bald eagles.

When photographing any type of wildlife, the first step is to understand their habits. There are close to 50 species of eagles in the world, each having distinctly different tendencies. 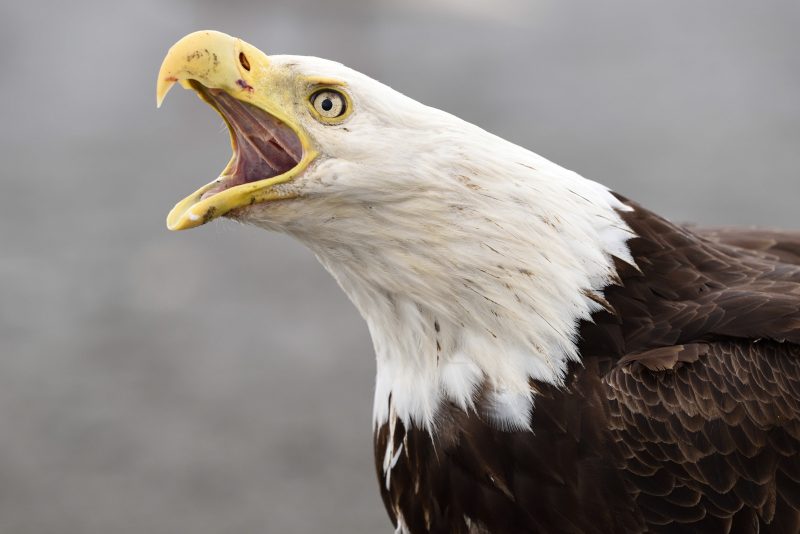 While they are considered opportunistic feeders, often feasting on carrion and other food sources, the vast majority of a bald eagle’s diet consists of fish. Establishing the best shooting location often involves locating the food source.

North America’s waterways can appear to be endless, offering ample opportunities for the bald eagle to feed. The state of Florida, for example, boasts the second largest population of bald eagles anywhere in the United State, trailing only Alaska.

With such a vast system of waterways and surrounded on three sides by the Atlantic Ocean and the Gulf of Mexico, one would easily assume that Florida is the perfect location. However, the obvious challenge for photographers is that they will not find more than a few subjects in one place. Instead, the species is spread throughout the vast landscape. 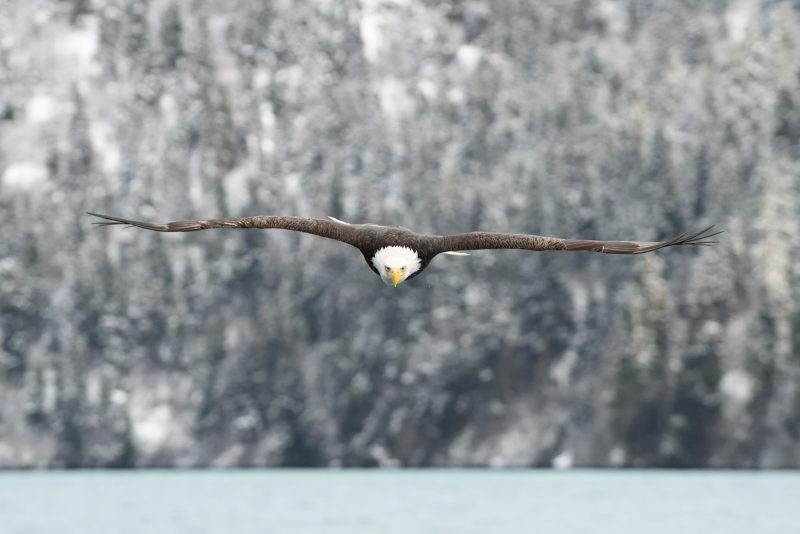 When winter arrives in the northern U.S. and Canada, those boundless waterways become ice, forcing bald eagles to open water to find sustenance. This scenario creates some of the best opportunities to photograph the species and can point photographers to some incredible locations.

A notable example of this happens from January to March along the Mississippi River, where a system of dams creates enough turbulence to maintain open areas of water, preventing the water from freezing. In recent reports from the Army Corps of Engineers, over 800 bald eagles were spotted in one location near Burlington, Iowa. 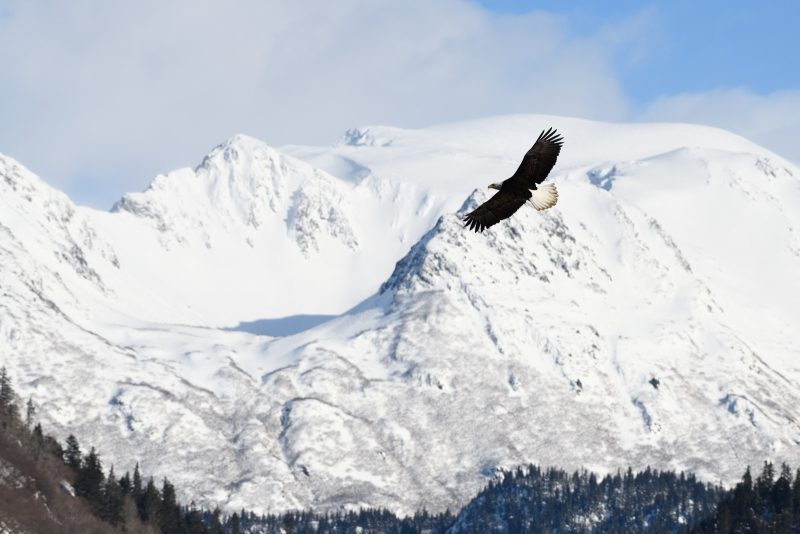 The Chilkat Bald Eagle Preserve near Haines, Alaska is another hot spot, and the same scenario of frozen lakes and rivers plays out as November approaches. In this case, a late salmon run provides an incredible amount of feeding opportunities; they typically last for 30-60 days in what many consider the largest gathering of bald eagles in the world.

Bald eagles can reach speeds up to 100 kilometres per hour during flight. While in a dive, they can exceed 160 km/h. Tracking them when using a large focal length can be challenging. They are also extremely resourceful when changing direction using their wingspan to maximize force, their tail feathers as a rudder, and the weight of their legs for leverage.

Simply keeping them in the frame is a challenge and often the first thing that photographers consider during their first attempt. 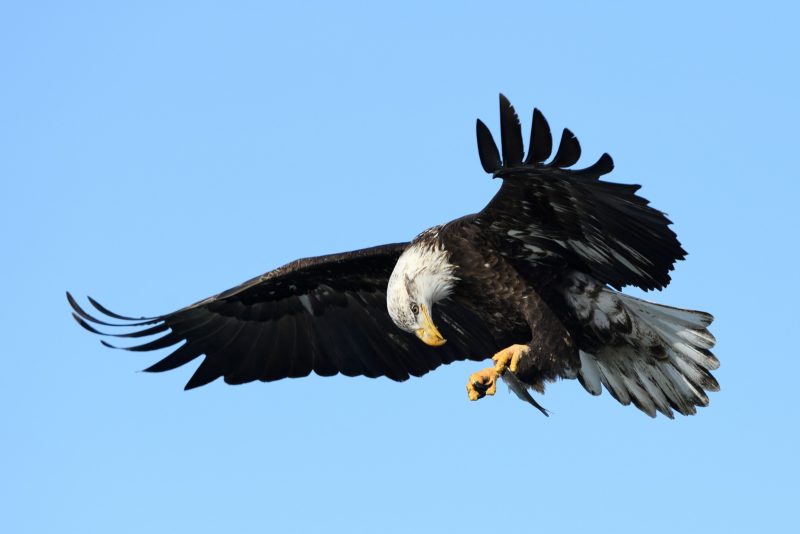 Yet, the most significant hurdle to successfully capturing images of bald eagles has nothing to do with controlling the camera. It’s about controlling the light. Special attention needs to be focused on what is perhaps their most distinguishable feature – their white head.

Today’s metering technology is growing more impressive with each generation of cameras, but they are still no match for the high-contrast nature of this subject. 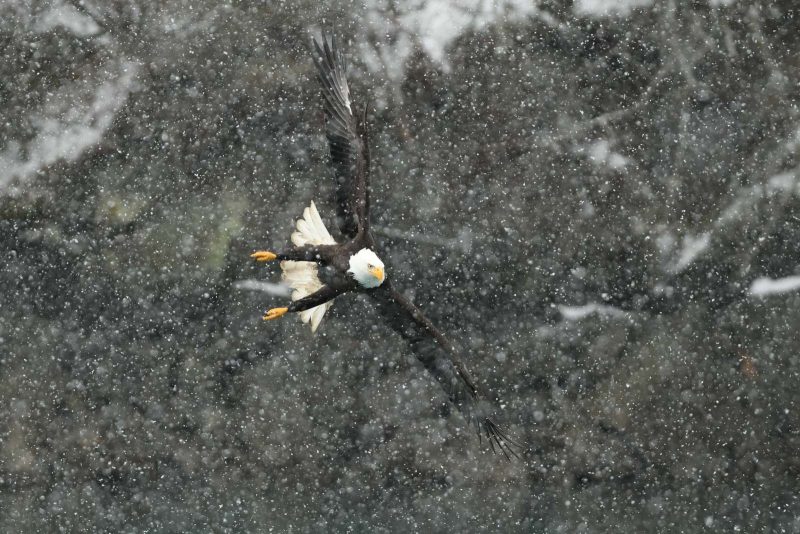 While shooting a dark subject surrounded by snow, experienced photographers have learned to concentrate the metering decisions on the subject itself, ignoring the brightness of the snow. Photographing bald eagles creates a similar situation as an improperly exposed head will render an image useless.

Even today’s advanced metering systems don’t compensate for this, failing to understand how critical a well-exposed white head is to the equation. A photographer’s best option is to establish a reading from the head and forget about everything else. 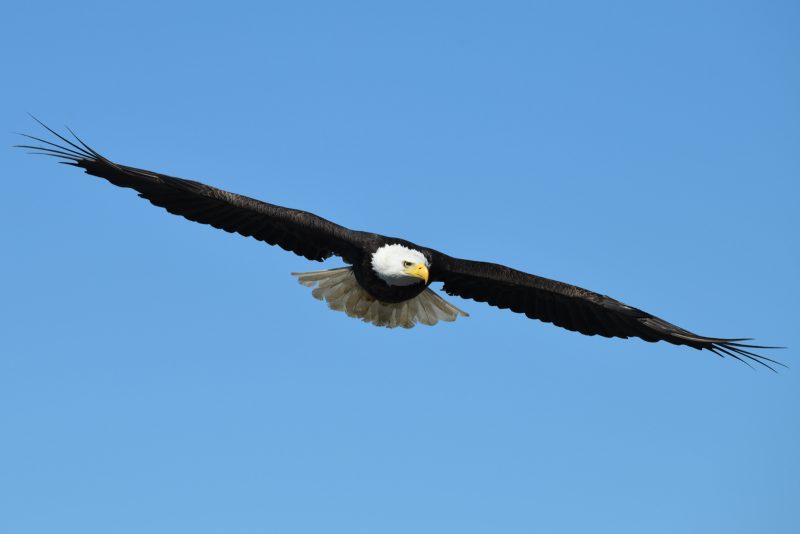 This also amplifies the need to use manual exposure modes to prevent your camera from attempting to expose the entire scene. Exposure lock functions are useful in this situation, should you choose to use an automatic exposure mode.

When it comes to light, I lean heavily toward bright, sunny days when photographing bald eagles for many reasons. As they use their powerful talons to pull a fish from the water, fast shutter speeds combined with the bright, directional light will freeze water droplets in the air. 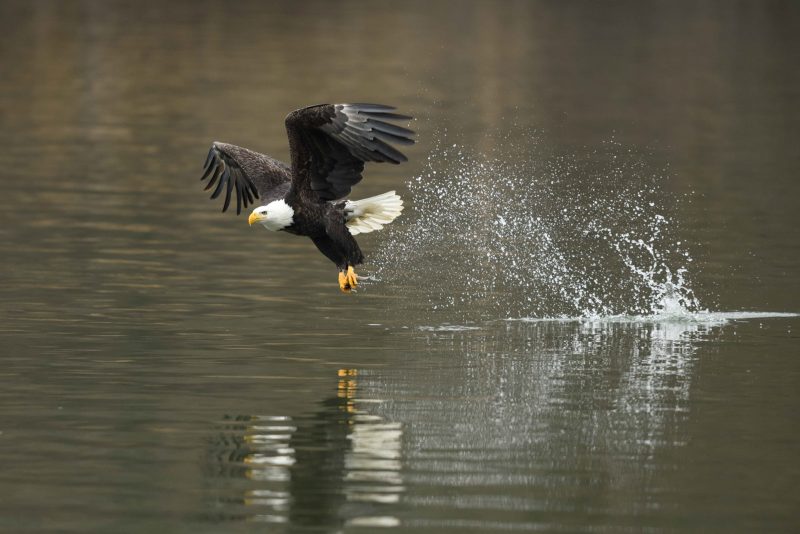 The pinpoint nature of direct sunlight also creates small shadows in their white plumage, adding detail to their white head. The predictability of sunlight helps from a metering standpoint, allowing the photographer to set the shutter speed at a blazing fast 1/3,200th, the ISO at a noise-limited 400, and the aperture to f/7.1. Thus, finding a balance between shallow depth of field and giving wiggle room to correct potential errors related to autofocus.

You’ll still need to audit your results, but this ‘set it and forget it’ approach allows you to concentrate on other things, like autofocus and tracking. 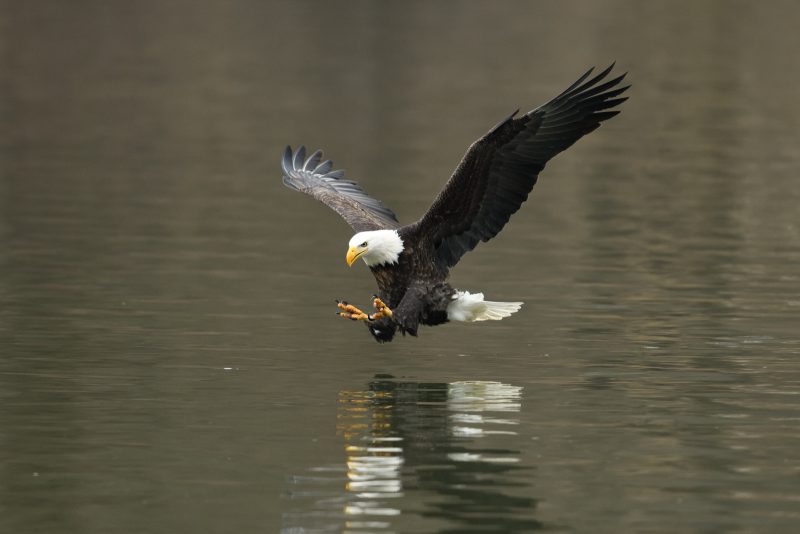 While shooting in sunlight offers several advantages, it also presents a significant challenge. The slim nature of a bald eagle’s head creates two hemispheres, often causing shadows over half of their face. Positioning yourself with the sun at your back is the best option to minimize this issue.

If attempting to photograph bald eagles while lighting conditions are less than ideal, like overcast skies or during the magic golden hour, settings are going to be less predictable. 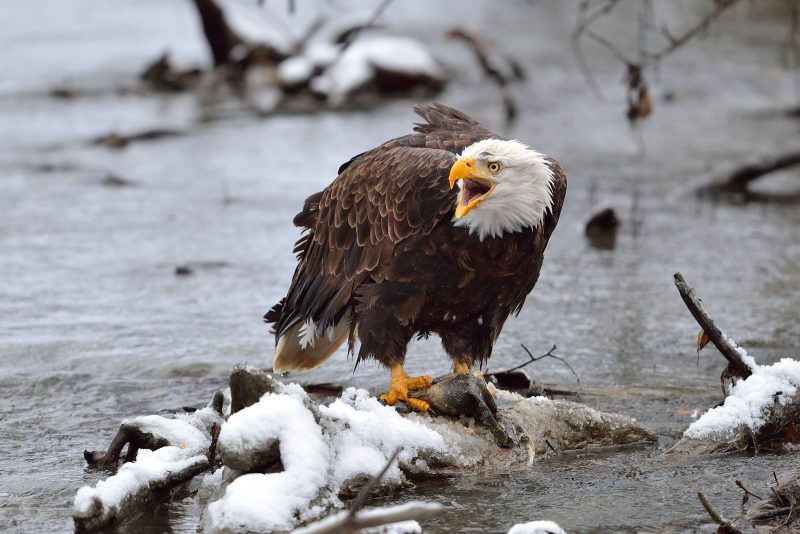 It’s also important to take note of water; grey skies create grey reflections. A dark background when shooting under an overcast sky will minimise the grey and give your images a moody feeling.

This logic should especially be followed if there is snow in the forecast. White snowflakes are far more visible against dark backgrounds and will provide some variety to your bald eagle portfolio.

Bald eagles are fearful of human activity so it’s often necessary to use lenses capable of a focal length of 400mm or greater.

Given the fact that most bald eagle images are captured during the winter months, atmospheric haze can become an issue that is only exacerbated by larger lenses.

Before you grab that 800mm lens and 2x teleconverter to capture an image of a bird that is off in the distance, keep in mind that it’s better to get close. Hunting blinds can be extremely effective as they allow the subject to come to you.

Photographing any type of action can become a numbers game, making camera speed a critical element when photographing bald eagles. As a bald eagle dives toward the water to capture its prey, you’ll only have a split second to react. 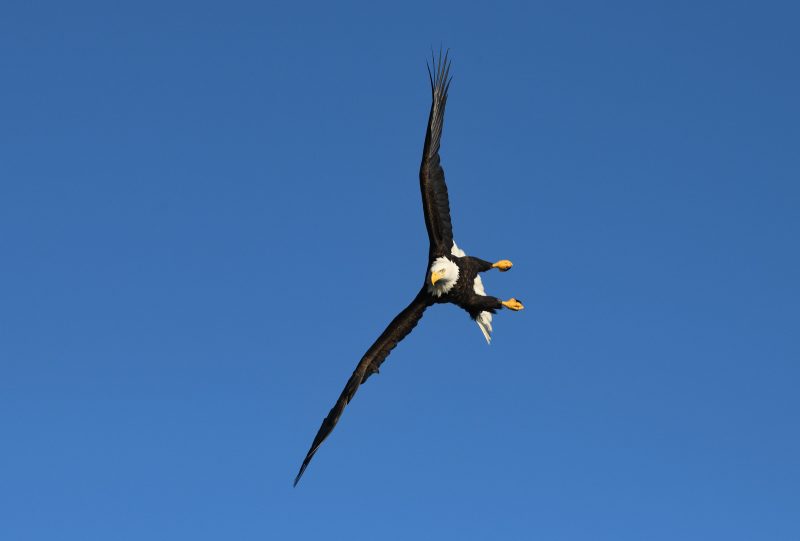 While you only need one frame to capture a great image, high frame rates only serve to improve your chances of capturing a specific moment.

Many of my best images were captured years ago while using equipment that was only capable of 10 frames-per-second (FPS). If you would have handed me a modern mirrorless camera capable of shooting 20-30FPS, I would simply have had double the number of images to choose from.

Opinions vary when it comes to the use of tripods when photographing bald eagles, but several advantages should be considered. 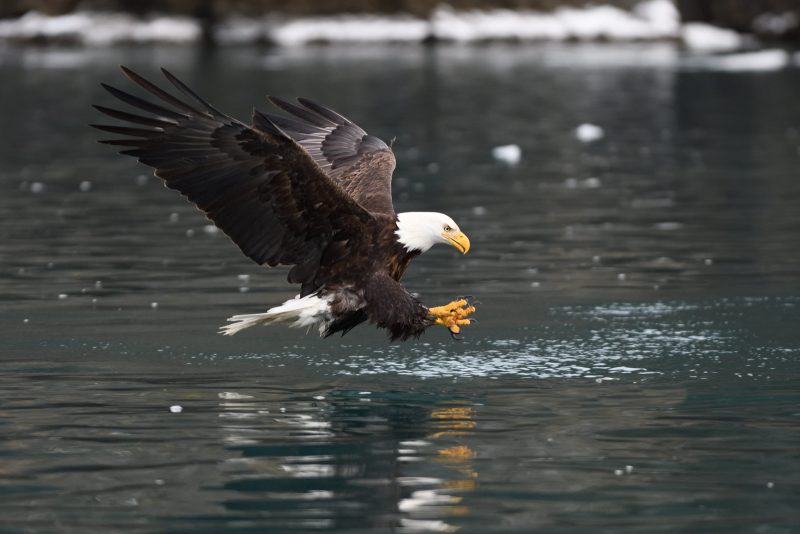 As mentioned above, simply tracking them can be a challenge. When a bald eagle decides to change direction without warning, the chance of keeping the subject in the frame only increases while using a tripod with a gimbal.

This combination also helps produce sharper images as manoeuvring large lenses for any length of time usually leads to a lack of stability. If the subject is bouncing around the frame, higher shutter speeds are needed to stop the action.

Read more: What are the Best Lenses for Bird Photography?

While challenging, photographing bald eagles can be extremely rewarding. Aside from their tie to American history and culture, they are one of the most photogenic subjects that a wildlife photographer can capture.

From their regal posture and menacing gaze to their spectacular actions in flight, they should be part of every wildlife photographer’s portfolio.