How to Photograph the Salmon Run 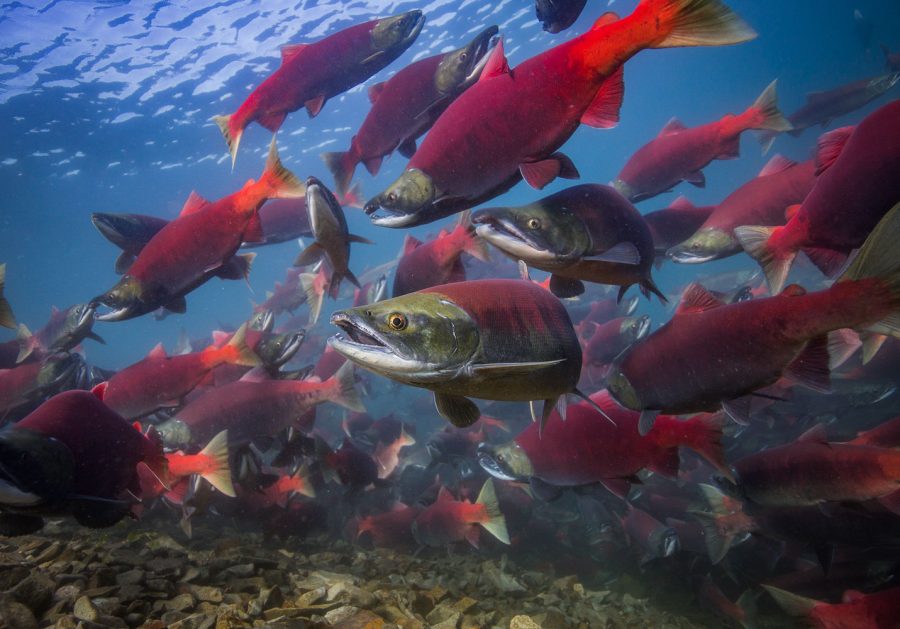 Home » Photography Tutorials » Wildlife » How to Photograph the Salmon Run

As a research scientist for the University of Washington, I have had an incredible opportunity to work in some of the most remote, pristine, and productive salmon ecosystems in the world. For several years I have been spending my summers in locations in Bristol Bay, Alaska, assisting in field studies which include running remote field stations, driving boats, hiking up streams, and collecting data on pretty much everything related to the wild sockeye salmon run and their ecosystem.

It is while working in these essentially untouched areas that I developed my passion for nature photography, and nowadays wherever we go to conduct research in Alaska I carry around an array of camera equipment ranging from drones to underwater rigs – all in an effort to capture the amazing scenery and wildlife in my spare time.

When I return to Washington State in autumn, I continue to focus on salmon runs around home rivers and streams in the Cascade Mountains and out on the Olympic Peninsula. 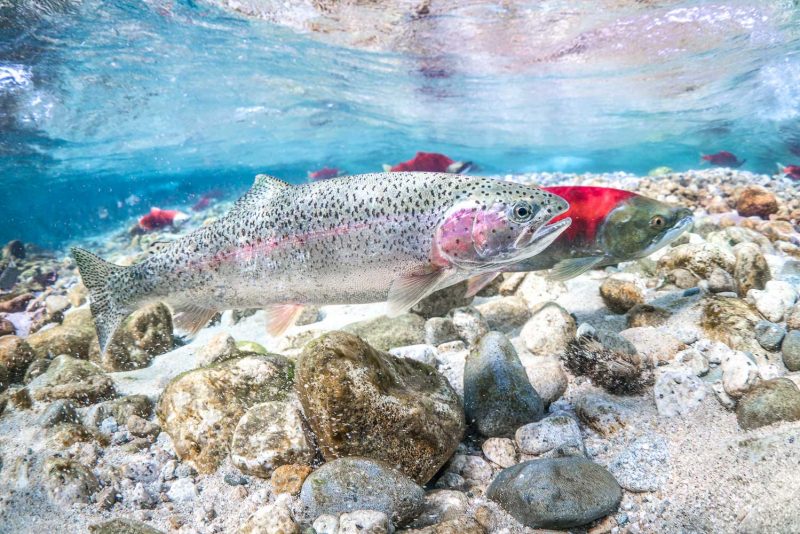 In my experience as a salmon photographer, I’ve learned that having a successful day underwater is mostly about reading the environment and salmon to better prepare yourself and thus improve your odds of coming out with some keepers.

Salmon runs take place in a variety of habitats, under many different conditions, and so it helps to be adaptable, flexible, patient, and observant. There are some incredible freshwater photographers out there with many more years of experience, but with 6 years of shooting salmon in a variety of cold freshwater environments ranging from the clearest spring-fed creeks to muddy sloughs, I’m happy to share my experiences and what I’ve found that works for me when shooting the salmon run.

Having a flexible kit is really helpful for shooting creatively in a variety of salmon habitats, but you can certainly do great things with just a few essentials. My wide-ranging kit for underwater salmon photography helps me to adapt to different habitats and circumstances and it’s seemingly ever-expanding as I run into creative limitations, brainstorm new ways to photograph salmon, or try to approach certain locations more effectively.

I think that the general theme of my kit is to be as compact and unobtrusive as possible to allow me to get as close to the salmon as possible. 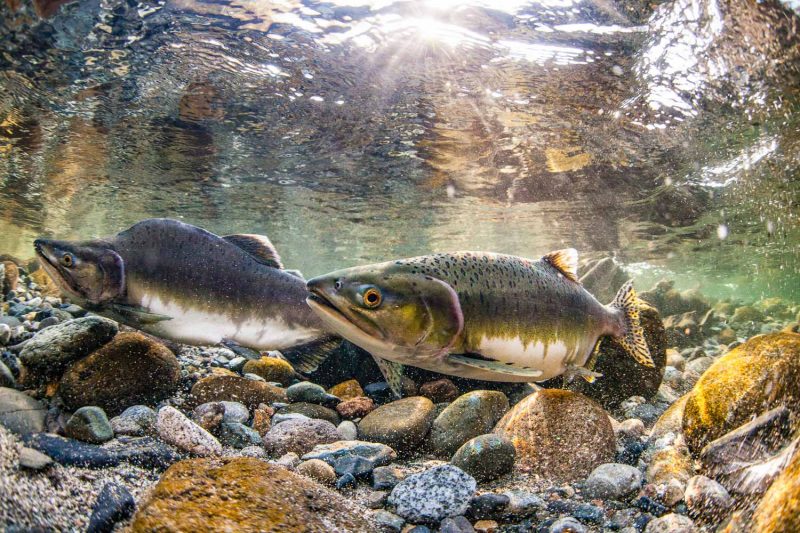 As a solo camera operator who focuses just as much on video as on photos, I’ve always been interested in single cameras that do both well in order to keep my kit somewhat manageable, and just make things overall less complex. For me, the Sony A7III fits my needs in both the video and photo department, and it is what I currently shoot with.

I’ve gone through several cameras and housings though in my 6 or so years of shooting salmon underwater. I started out with simple point-and-shoots in housings, then moved to Canon DSLRs when I was interested in better photo quality and controls and started out with using these DSLR cameras in surf housings which were affordable, simple, lightweight, and compact and were actually pretty great for stream photography – especially when a lot of hiking was involved.

As DSLR camera systems became more capable of capturing high quality video, I started to move more toward filmmaking. However, I quickly ran into limitations with a lack of camera button access on surf housings and switched over to dive housings for their increased functionality. I started out with Ikelite for their great price point, and now have been shooting with Nauticam housings for the last two years.

Nauticam gear is relatively expensive, but I’ve found that their large port selection and the thoughtfulness, quality, and general innovation of their gear really opens those doors for creative shooting and I’ve been really enjoying it so far.

My most used lens throughout my underwater salmon photography career are wide-angle fisheye lenses. When I shot with Canon DSLRs, this was the Sigma 15mm fisheye. Currently, I shoot with either the Sony 28mm with the 16mm fisheye adapter, or the same 28mm lens with Nauticam’s wet wide-angle adapter.

With these fisheye lenses, you have to get close to the salmon for them to fill the frame – such as 20 to 40cm away, which can be tricky. If you can pull it off, though, it allows you to get photos that are striking because the salmon are prominent and the shots preserve details and colours which can fall off pretty quickly after 50cm or so.

I shoot either of these wide angle options probably 90% of the time when shooting adult salmon, and for the most part it’s all I really need to get the majority of my shots.

Other lenses I take with me, but aren’t often used, are my Sony 16-35mm F4 primarily when I’m shooting video and want some flexibility in the zoom range, and the Sony 90mm macro is great when shooting juvenile salmon – but it can also yield some interesting results picking up details on the adult salmon as well.

My camera settings on my Sony A7III vary under different environmental conditions, but with my fisheye lens a good starting point is with an aperture value around f/9, a shutter speed at 1/250 and greater, and with an auto ISO with the upper limit set to 10,000.

With salmon being close to the lens, having a higher aperture value helps to ensure I have at least the proper elements, namely the eyes of the salmon, in focus. 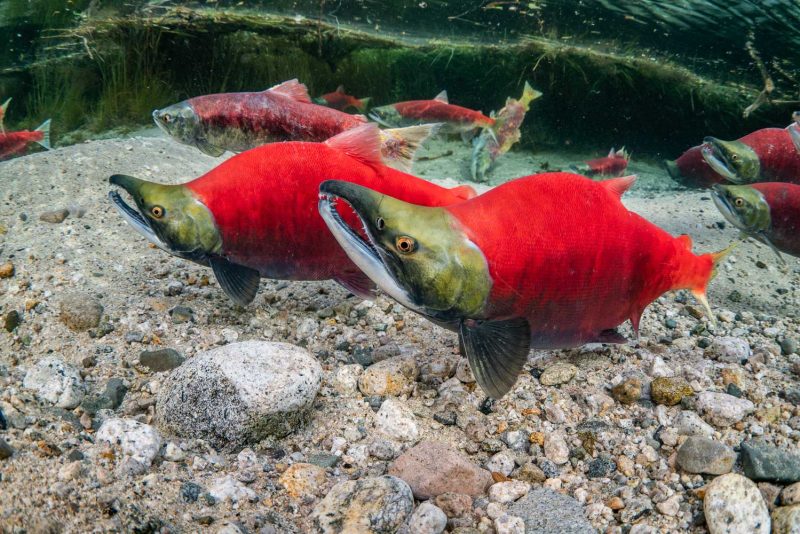 I try to keep shutter speeds higher than 1/250. If the salmon aren’t doing much moving around, then this speed can work out and sometimes a bit slower if you need that extra bit of light. But if they are doing any kind of movement, it’s helpful to bump it up past 1/320 (and really as high as you can without going into crazy high ISO values).

Sometimes a little noise is less distracting than motion blur and eyes that are out of focus, so if necessary I bump up my ISO beyond 10,000. Luckily, Sony cameras are well known for their ability to shoot cleaner images at high ISO ranges and things hold up rather well until you get into the extended ISO range of 64,000 and up.

Environmental factors to be aware of

With experience, I’ve learned what difficulties come with shooting in specific locations and from that I’ve developed methods and systems to try to make the best of most factors to help me have the most options as possible underwater.

Some of the main factors I consider when shooting salmon in freshwater are water clarity, stream flow, available light (and the angle of it if there is any), and lastly where the salmon are in the water as well as their numbers and what behaviours they are exhibiting and how they are reacting to me.

If I’m shooting in murky water, I am usually limited to shoot fish as close the camera as possible with wide-angle lenses to cut down on the amount of particulates between the camera and the salmon for clearer images.

Shooting in crystal clear water affords the opportunity to use a combination of different focal lengths for both macro and more portrait shooting, but this is really only possible in very clear water with lots of light coming in.

Varying light conditions play a large role in photographing salmon runs in shallow water. Some locations I shoot have thick canopies of trees above, essentially letting no light into the water and requiring strobes to avoid shooting at incredibly high ISO levels.

In other locations, sunlight at very specific times of the day can lead to undesirable conditions underwater washing out fish, creating harsh shadows, or lighting up particles in the water. You can sometimes adjust your shooting angle to help reduce some of these effects, but it’s useful to be aware that locations can look different throughout the day.

Shooting in fast flowing streams can be really dangerous, and it often limits safely shooting to very specific locations in the stream. The benefits are that the fish are often also limited to predictable spots in the stream, you can also count on the salmon being oriented in one direction in the stream so you can pick your angles for photographs, and usually but not always true of faster flowing streams is that they are clearer and able to flush any sediment that you or the fish might disturb.

The opposite is true for most still water locations like lakes or ponds where salmon also spawn, as they have a larger area to comfortably avoid you and are swimming around in all directions. Sediment that you or the fish kick up can be in the water column for hours.

It’s important to be respectful of these fish that have traveled thousands of kilometres to spawn, and sometimes the best practice is a matter of laying down for an hour or two waiting patiently for the salmon to come to you rather than chasing them back and forth in a stream – which I can say never produces desirable images.

I’ve found that salmon are generally more tolerant around me if they are present in large numbers, and conversely if I am trying to get into a stream with only a few it can take a lot more patience in trying to produce a shot.

Taking a moment to observe the salmon before getting underwater is key to determine your approach and ideal locations to wait patiently. Positioning on the outer edges of nests, while being careful to not disturb them, can lead to interesting behavioural shots; inching up to large holding schools of salmon produces some of the most striking shots.

Assess, approach, and get creative

With these tips to help you understand how varying conditions might affect what you see underwater, you can determine what gear and approaches might be necessary, and then what kind of creative angles and elements to include in your shots.

Before I enter any body of water, I take an assessment of all of these factors and try to think of what might be the best shot I can pull out under the circumstances and tailor my equipment and approach underwater accordingly.

Only about half of the time do I get the shot that I envisioned in from the start; sometimes while underwater you see something completely different and come out with a shot better than what you may have planned.

Shooting the salmon run and just swimming with these fish while understanding their incredible migration and lifecycle, and what they provide to each and every ecosystem they touch, is pretty incredible.

If you do decide to get in with the salmon, please remember that any kind of underwater photography is inherently dangerous and coldwater streams present a whole array of risks that shouldn’t be underestimated. Never go alone and know and respect your limitations. Once you’re underwater though, remember that it’s about being adaptable, flexible, patient, and observant.