How to Choose the Right Tripod 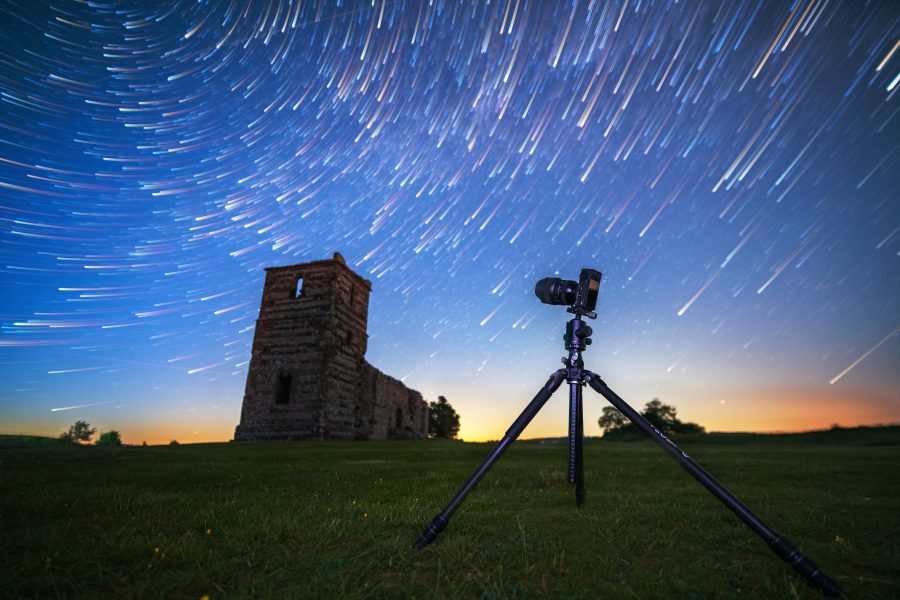 Home » Photography Tutorials » Basics » How to Choose the Right Tripod

One of the most important, but often overlooked, bits of kit for a photographer is a tripod. Tripods can be incredibly useful in a number of scenarios, for example, low-light shooting, landscape, studio, architecture, macro, wildlife, and sports photography.

At the end of the day, all tripods will effectively do the same thing: stabilise your camera. However, it is worth noting that they are not all made the same, and some do the job far more efficiently than others.

In this guide I’ll be going through some things to look out for, helping to make sure that you spend your money wisely.

Do I really need a tripod?

Okay, so I know camera technology has moved on, and there are amazing little cameras from Olympus that allow you to shoot hi-res mode handheld, thanks to IBIS (In Body Image Stabilisation). But, honestly, technology like that is most useful for those times when you forgot to bring your tripod along in the first place!

Of course, tripods are not essential if you can be creative enough with what you have with you, and use your surroundings, but you’ll still be very limited in what you can achieve. When used correctly (aided by a few drops of creative juices), a tripod will certainly open the doors to a new world of photography for you!

There’s a lot to consider when buying a new tripod, most of which could take a few months or years for you to learn. But, here are some things to ask yourself:

Will a tripod be necessary for your type of photography? There are some cases – wildlife photography, for example, where a tripod can be too cumbersome, and slow you down. Street photography is all about being discreet, so a large and conspicuous tripod probably isn’t ideal. However, a smaller travel tripod may just do the job for those rare times you need one.

Which do you favour more, something tall or something shorter? Will you be shooting at eye level often, or do you shoot things closer to the ground, like mushrooms, for example?

How often will you be out trekking with it? Do you need something lighter and portable, or heavy and solid? There isn’t much point in buying a rock-solid 4kg tripod if it gets left behind because you’re not willing to take it with you.

It is all about finding the right balance, but do bear in mind that, for most people, there is never a perfect tripod that does everything. There will always be compromises to be made, but more on that later.

Most tripod manufacturers will give you the option of two materials to choose from: carbon fibre or aluminium, with the latter being the cheaper alternative. Both have their strengths and weaknesses.

For instance, aluminium tripods tend to be on the cheaper side, but are heavier than their carbon counterparts. Carbon tripods are often touted for their lightness and rigidity, but that comes with a hefty price tag.

Thanks to a lower price tag, aluminium tripods are often favoured by beginners. Most of the time carbon fibre is the stronger option, but I have heard horror stories of carbon tripods shattering under colder temperatures. Going from my own personal experience, cheap carbon tripods are usually less stable than equivalently priced aluminium ones, so be careful and be sure to read user reviews.

Most tripods feature three leg sections, with some offering four or five. Three-section tripods tend to be taller and heavier but, in general, are sturdier and quicker to setup. The four and five-section tripods are designed to be smaller and more compact, allowing for easier storage.

The diameters of each leg section will also play a vital role in the tripod’s rigidity. Put simply, the thicker the legs, the sturdier it shall be. On average, most tripods will have leg diameters ranging between 20-26mm. In most cases, you’ll need to splash the cash for a tripod with leg diameters over 30mm.

Personally, I would always try to get the thickest leg diameters possible, as nothing is more annoying than a wobbly tripod!

When setting up a tripod, you are required to unlock the leg sections, extend the legs, and then lock them into place. Obviously, the locking mechanisms play a vital role in the functionality of your tripod, so it is best that you choose wisely, and consider which kind of locks might work best for you.

You get two options when it comes to the leg locks: twist locks or lever locks. I cannot tell you if one method is better than the other, because it all comes down to the build quality, and your own personal preference.

I would highly recommend you pop into a photography shop and try out both methods to see which you prefer.

Read more: A guide to choosing a tripod head

Personally, I am a big fan of twist locks. I find them quicker to release with one hand, easier to operate when the conditions get rough, and they require much less maintenance over time. With this being said, cheaper tripods with twist locks are prone to slippage.

So, when you’re trying one out, make sure you tighten them properly, and put some of your body weight on the tripod. If it slips, walk away!

An advantage of lever locks is that you can easily tell by looking at it if the leg is locked or not. However, due to the nature of their design, they are more prone to failure, especially if they are not properly maintained.

Over the years, I’ve have had the inner mechanisms of lever locks fail on me multiple times, which really put me off them. Despite this, I know many photographers who love them.

My current setup consists of three tripods (one of them about 8 years old!), all with twist locks, and none of them have failed me yet. Whichever style you decide on, I cannot stress enough how important regular maintenance is, especially if you plan to use it in harsh conditions, such as the beach.

Another important choice to factor in is the weight of a tripod, and how much you are willing to carry. The heavier the tripod, the less fun it will be to bring along! If you opt for a lighter tripod, you are more likely to carry it with you. Just make sure you can live with the limitations.

One rather major limitation of lighter tripods is the amount they can handle. Most of these small ‘travel’ tripods have a limit of 5kg or so. This may sound like plenty but, if you start nearing the limit, you could face issues with stability.

If, like me, you are often shooting in some strong coastal winds, for example, then a lightweight tripod is not ideal, and will need anchoring down to help keep it stable.

Tripods come in a variety of sizes, ranging from tiny little things that will just about hold a phone, to absolute giants, reaching 3 metres or so! All tripods allow you to have full control over their height, but you’ll find that most ‘budget’ tripods will struggle to reach 150cm or more.

Of course, it is going to depend on your own needs, but I would recommend finding one that extends to at least your eye level. Taller would be an added bonus. Having a tall tripod can be very useful at times, and it’s nice to have that extra versatility.

However, bear in mind that, when you extend a tripod to its maximum height, this will have an effect on the overall stability, resulting in an increased risk of camera movement. On the other hand, you can get some absolute giants that will easily reach 2 metres, yet still offer unbeatable stability.

Sounds good, right? Sure, if you’re willing to pay the price for one!

Read more: How to get sharp and in focus starscape photos

If you are willing to sacrifice some of your tripod’s rigidity for extra height, then look for ones featuring a centre column. Most tripods under £300 will have this feature, but that’s not to say they all do the same thing. You’ll find some can only raise the centre column for added height, with no other functions.

There are some manufacturers out there who have engineered the tripod’s centre column to be a highly versatile function. Vanguard’s new Veo 3+, for example, features impressive versatility, allowing it to be angled in just about any position. 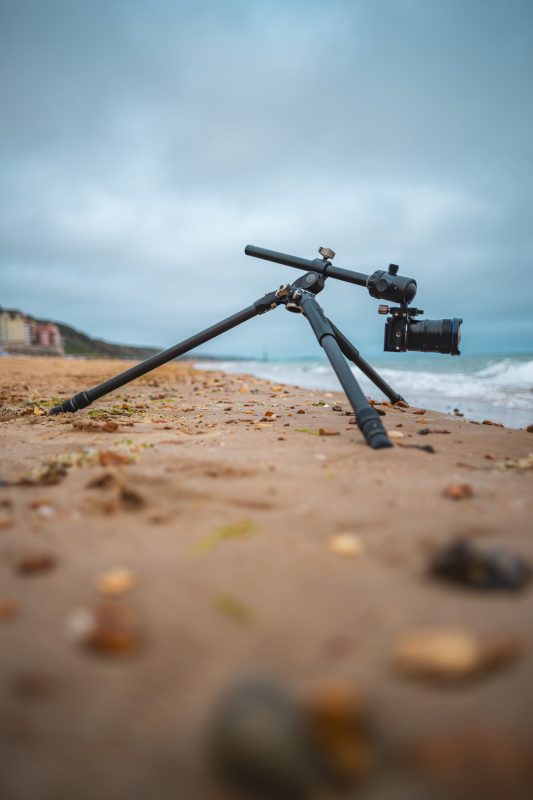 If a centre column cannot be manoeuvred horizontally, then this will have an impact on the minimum height. So, I would recommend finding one that allows for this.

If height isn’t a priority, and you often find yourself shooting low angles, then perhaps you should consider a tripod without a centre column. They offer more rigidity in comparison, and also allow you to get low to the ground far more quickly and easily. The only issue is that they are not cheap!

There are plenty of little accessories that can make your tripod perform better in certain situations. As aforementioned, lighter tripods will need added weight to aid stability. Well, some tripods will include a removable hook, which attaches underneath the centre column.

This allows the photographer to hang their bag on it, increasing stability. If there isn’t a hook, then look out for a small loop somewhere near the base. This will allow you to attach a carabiner clip, to which you can then hang your bag.

Spiked feet are great to use when shooting on ice or damp sand. The rubber feet on most tripods are removable, and some manufacturers are kind enough to include various feet attachments to suit different terrains. Unfortunately, there are also some companies who make you pay hundreds of pounds for the tripod, and then charge you extra for added accessories.

Read more: 10 important things to keep in your camera bag

As we are all aware, photographic equipment does not come cheap and, most of the time, you get what you pay for. Tripods play an important role for many photographers, and that’s why a lot of people are willing to pay a lot of money for one.

Tripods can be found at some pretty low prices, and I know that those just starting out will not want to spend £300 on something they may not even like. But, say you bought a £30 tripod: it’ll probably just fall apart, and you’ll wish you had put that £30 towards a £100 tripod, for example.

I’ve been there before with cheap tripods, and I’ll never go back again. If you want to start taking photography more seriously, I beg of you: don’t upgrade your camera or your lens, instead invest in a high quality, premium tripod which will allow you to be more creative as a photographer.

I do hope this article has given you some insight into choosing a tripod. Keep in mind that there isn’t a tripod on the market that can do everything for everyone. Each tripod is different, and some will perform better in certain areas, but they’ll also have their own shortcomings.

You just need to find the right balance of what works best for you. If you get the chance to try one out in a shop, test it thoroughly, see if the legs flex when fully extended, and make sure it reaches the height you require.