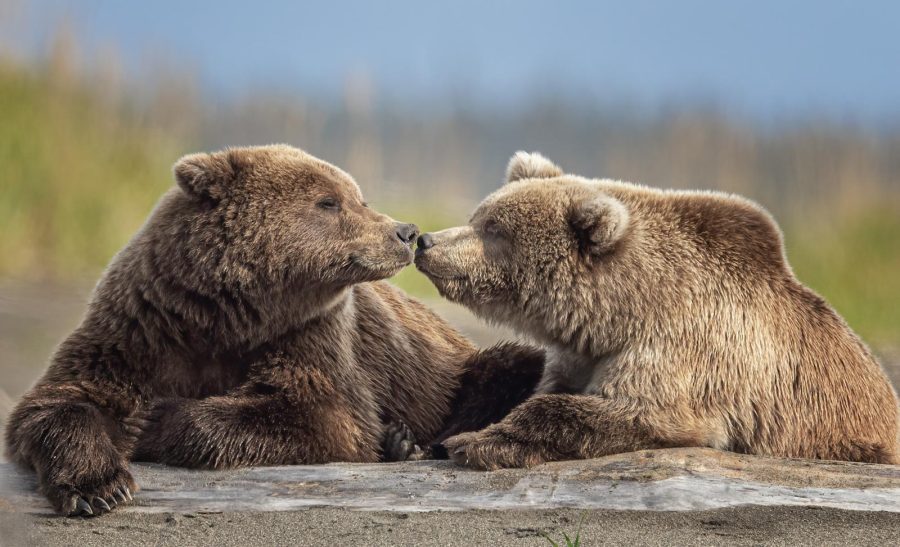 I live in a small town in Northern Alberta, Canada. The closest city is over two hours away. Each day though, I wake up feeling blessed.

I can literally open my door to whitetail deer eating from my bird feeders, a red fox scurrying its kits to a new den, fourteen moose within a kilometre of each other during the rut, or a mating pair of great grey owls returning each spring to raise a new set of owlets.

It is truly amazing. I never take for granted the grand and majestic Boreal Forest where I live. To me, the Boreal Forest is the last great forest on earth.

Telling the story of the Boreal Forest

Over the more than fifty years I have spent on this planet, I have seen the acidification of the oceans, the rapid shrinking of the rainforest, and the warming of our planet. The Boreal Forest is important to life as we know it. 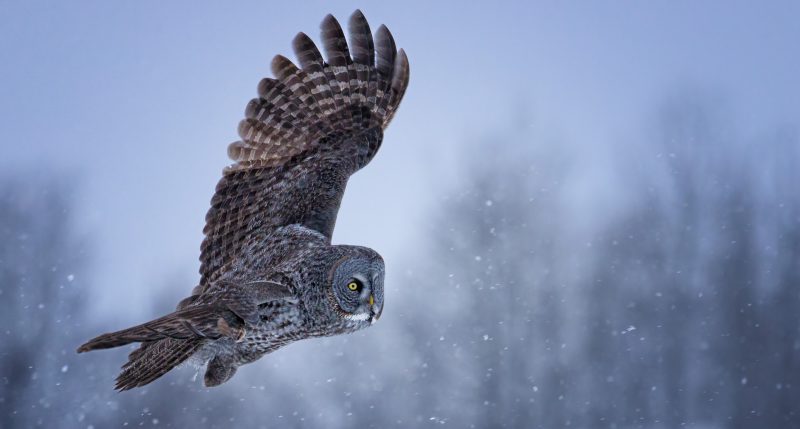 It may not have the lions and tigers, kangaroos and koala bears, or polar bears and muskox that other places have, making us all long for a trip to a far-off location to view these majestic animals. However, the animals that live here and their stories are just as important and just as majestic, and deserve to be shared.

My passion is to tell and honour their story through my lens. Having lived in the Boreal Forest almost all my adult life, I feel compelled to share its story and showcase the majestic creatures that call it home.

Also, I will admit I am particularly biased towards great grey owls. Regardless of how many times I see them, I am always excited to spend time in their presence and to photograph them. 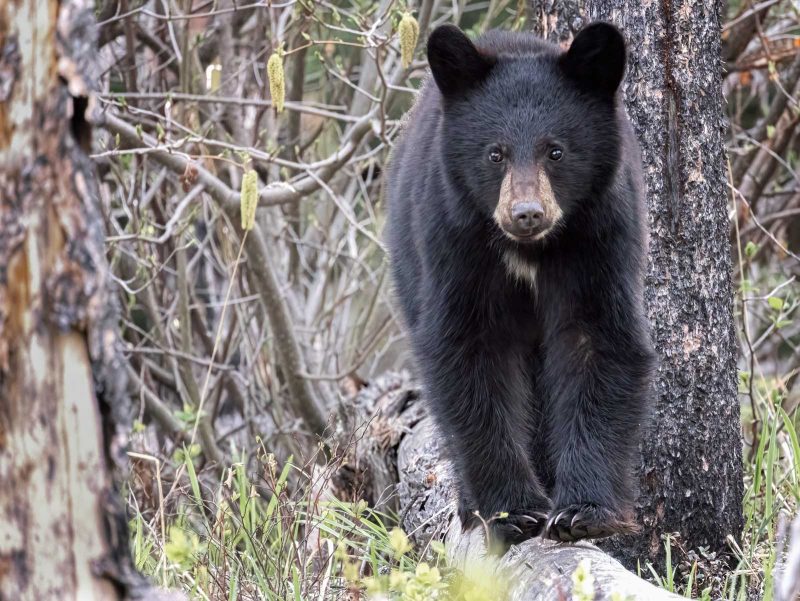 The forest extends across Canada from the Pacific Ocean to the Atlantic Ocean, with recognised variations of the forest existing in the Pacific Northwest and the Rocky Mountains.

Yet so many people drive the highways that crisscross the Boreal Forest and never really see it. They see trees, they catch a glimpse of an animal as it moves in or out of the edge of a clearing, but they do not stop, pause, and wonder as to its story, life, journey, and challenges.

A dynamic and complex ecosystem

The behaviours of the wildlife are determined by the changing seasons, including often brutal winters and at times sweltering summers. Temperature can swing 80oC from winter to summer, and at times 20oC just overnight, yet each species has found a way to adapt to live here. 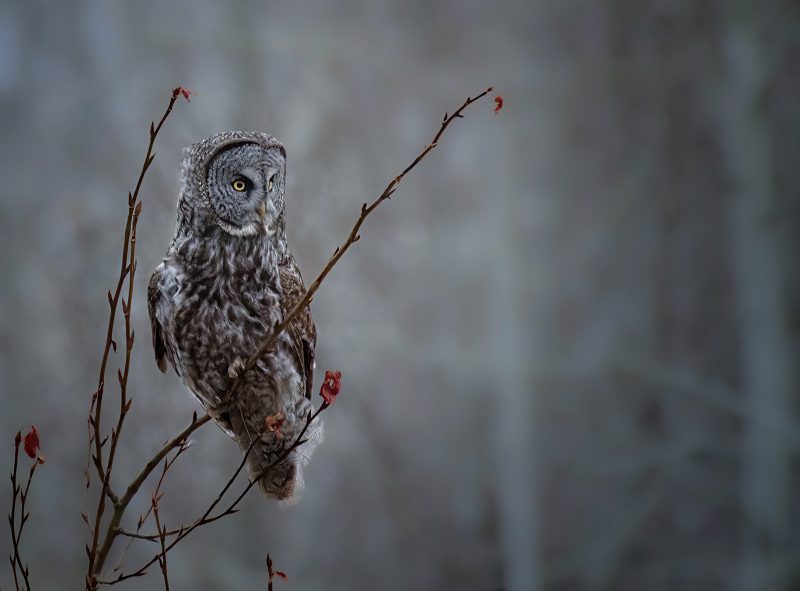 Take a close look at a moose, for example. Its long legs allow it to walk through the deep snow in the winter. The lower portions of the legs are white to blend in, yet the rest of the body is almost black to assist with camouflage in the darkness of the forest.

It never ceases to amaze me how a moose just a few feet into the forest can no longer be seen, despite its massive size. 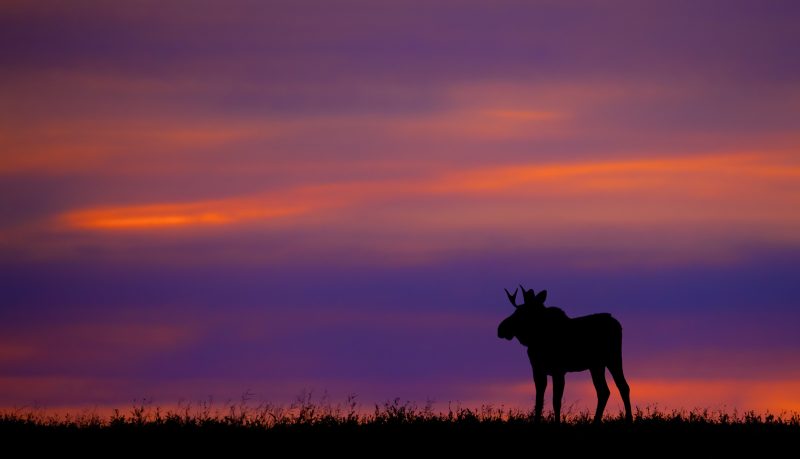 While winters can seem lonely and desolate in northern parts of Canada, just take the time to go into the forest. Be still and listen; eventually, the forest will come alive.

You will hear the black-capped chickadees and jays that stay year round singing to each other as they hop from tree to tree looking for food. You’ll see large owls, such as the great horned and great greys, sitting silently, intently listening for the movement of a meadow vole beneath the snow, or a squirrel making a move to its cache of acorns.

A whitetail deer may seemingly appear out of nowhere as it moves silently through the underbrush in the trees. A porcupine can be seen making its way to a clump of willows for an evening feast just before dusk. It never ceases to amaze me how so few people have never seen a porcupine! 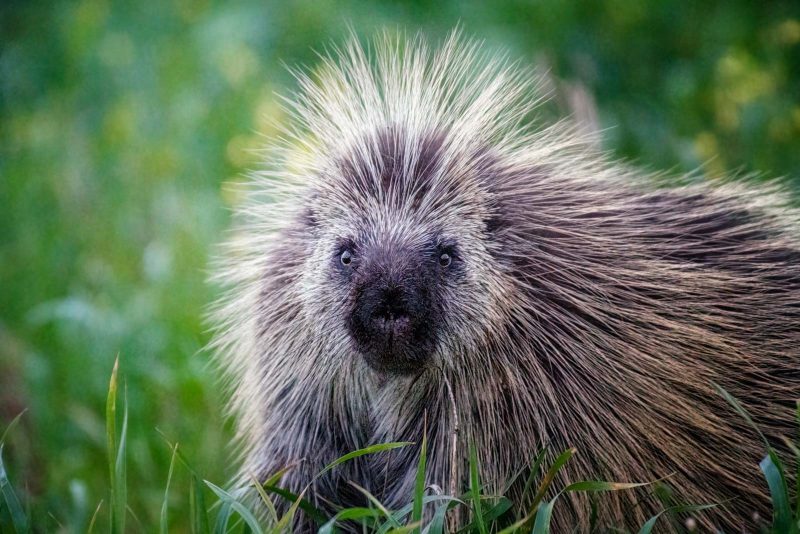 Migration patterns also bring different species into the area in the winter months.

Grosbeaks and redpolls come from the arctic to overwinter in the forest. Snowy owls migrate through, as do a plethora of shorebirds from their summer breeding grounds on the tundra, to winter locations south of the forest. Woodland caribou follow century-old migratory pathways through the range of the forest.

I love photographing the grosbeaks and redpolls, as their bright colours contrast the starkness of winter. Finding the elusive woodland caribou, which is threatened and whose numbers continue to decline despite significant conservation efforts, is truly profound. Winter offers many special opportunities for photography in the north. 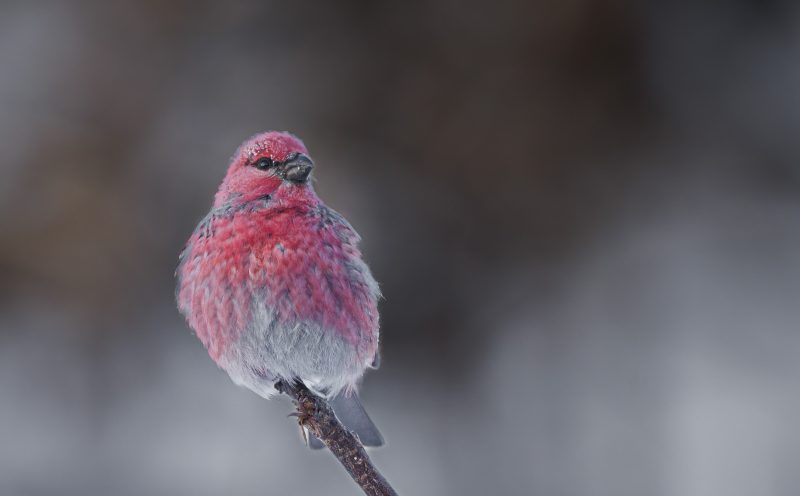 In the summer months, the forest is filled with hundreds of new species and literally billions of birds. There are over 300 species of birds, 130 species of fish, and 85 different mammals, as well as 32,000 different insects, and even a few amphibians that call the Boreal Forest home in Canada.

Early in the spring, while snow is still on the ground and the lakes are frozen, Canadian geese are some of the first birds to return, shortly followed by other waterfowl and the red-breasted robin. 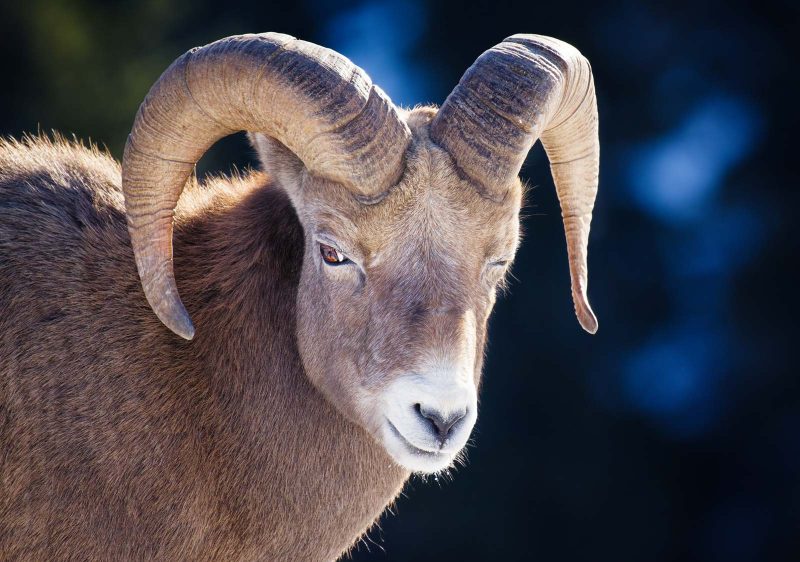 By May, when the leaves are starting to bud on the trees and grass is beginning to grow, the 25 species of warblers are back to mate and raise a new generation.

The call of the common loon on a lake can be heard, and is an icon symbol of Canada – as is the beaver busily working on fixing its home and stockpiling more wood stores to prepare for the next winter.

As a photographer, my work is dictated by the seasons. Large ungulates are what one looks for in the fall, when moose, elk, and deer are in a rut and the males sport glorious crowns of antlers. From January to March the owls are preparing to mate, and are out frequently during the day as they court.

Come spring, the waters are starting to unthaw and the lakes are full of life, supporting pelicans, herons, grebes, ducks, loons, eagles, and ospreys. 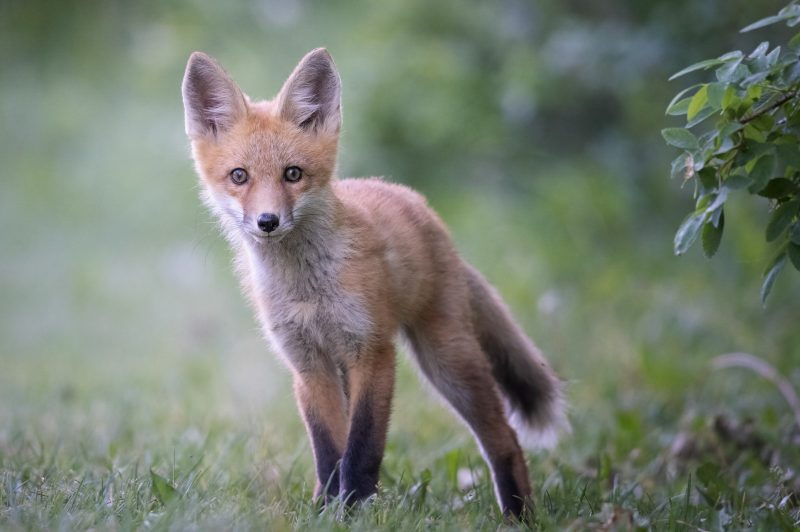 Spring also brings new life; fox kits can be seen in April, as can coyote pups. Black bears are also starting to emerge from their dens with their cubs, and by June the ungulates can be seen with their calves.

By fall, you hope to catch glimpses of the additional bird species that are migrating back from the arctic, and you can try to incorporate the stunning fall colours into your work.

Photography gear built for the outdoors

Your equipment must be up to the challenge in this climate. At times, I have been out in -40oC weather, where batteries drain fast and, frankly, some cameras simply will not work.

Your cameras and lenses need great weather seals, as at times you may be out in a blizzard or a downpour. 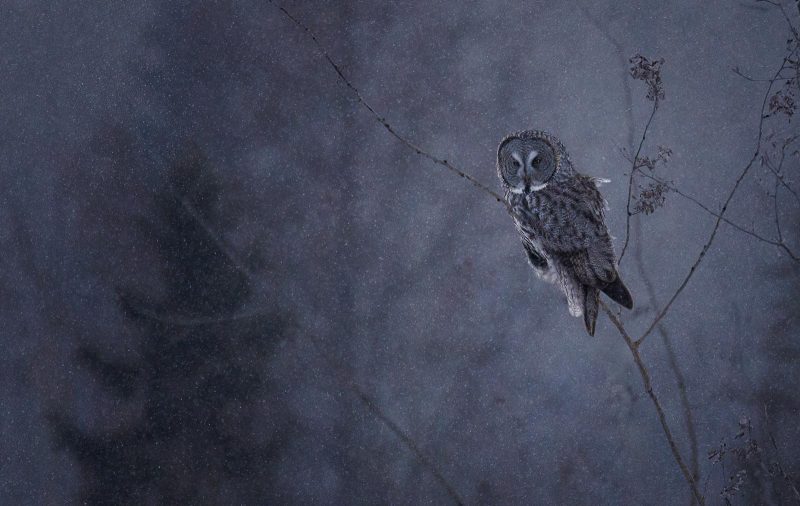 Complicating matters further, the wildlife can be wary of humans, as they are not as habituated to people as wildlife would be in more urban areas. So, even getting close is a challenge. This means you are carrying heavy long lenses through deep snow, sometimes in snowshoes or swampy areas.

In the summer months the mosquitos are terrible, and in the winter the winds can be bone-chillingly cold.

The amount of daylight is another variable. In the winter months where I live, in December there are less than seven hours of daylight. This does not offer a lot of time to track, find, and photograph wildlife.

In the summer the days are long, with close to 18 hours of light. However, this means you need to get up very early to set up in a blind to photograph ducks. At times I am up and gone by 3:30 am, as the sun is coming up by 4:30.

To work in this wilderness, I shoot with the very durable Pentax K-3 (I know this is not a normal camera for a wildlife photographer, as it cannot compete on shutter speed, but it handles the snow and the cold like no other camera out there), and also the Canon R5. 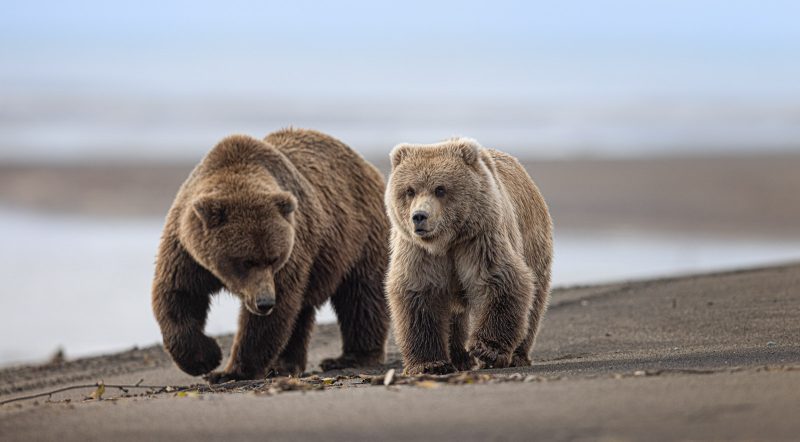 I only use the Pentax if I am in exceedingly cold (below -30oC) temperatures, or in winter blizzard conditions. With the Pentax, I have the 150-450mm DFA Pentax lens with a 1.4x teleconverter.

Most of the time I am shooting with the Canon R5, my lens choice depending on what I am photographing. I use a 400mm f/2.8 lens if I am in low light conditions. I use a zoom lens (for me this is currently the Sigma contemporary 150-600mm) if I am hiking through the forest, as it is fairly lightweight.

I use the 800mm f/11 when I am photographing hawks, eagles, or osprey in flight, or coyotes in the snow. Generally, I use the 800mm only when I am out in full light, and when I have a background with no detail like snow or sky.

If you are considering taking up photography as a hobby or a career in the Boreal Forest, my advice is to be prepared and know the challenges.

Success here means knowing your subject and understanding its behaviour. It means being willing to be outdoors in all sorts of weather and conditions. It means being prepared to carry heavy equipment through heavy undergrowth or deep snow. 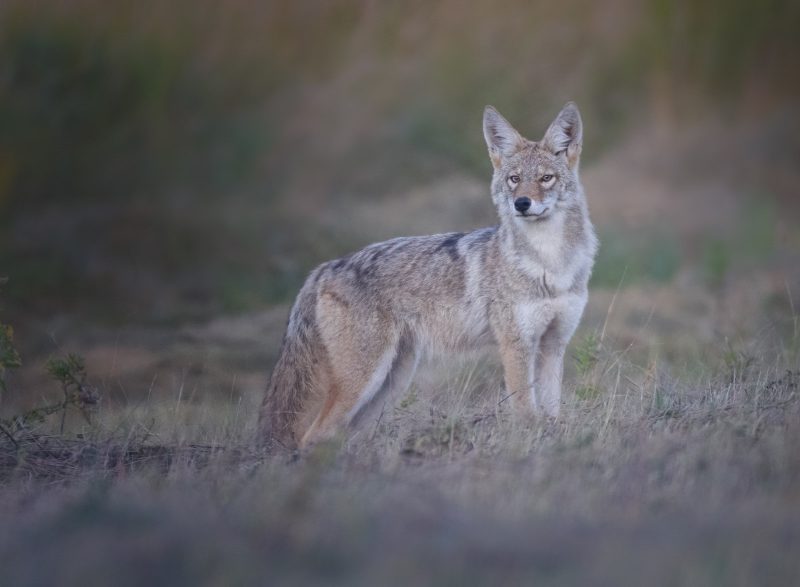 It means accepting that your camera is going to get bumped, banged, and bruised as you push through the forest. It means being willing to have days on end when you see nothing, and other days when you witness 20 different species.

It means being willing to be patient for hours outside a den. It means getting up exceedingly early, or staying out exceedingly late.

Yet there is also nothing more rewarding than getting that once-in-a-lifetime moment of being alongside these animals on their journey, and of sharing their stories of victories and defeats.

I am out there every day because I want to tell their stories and be a witness to their journey.