How to Photograph Lions 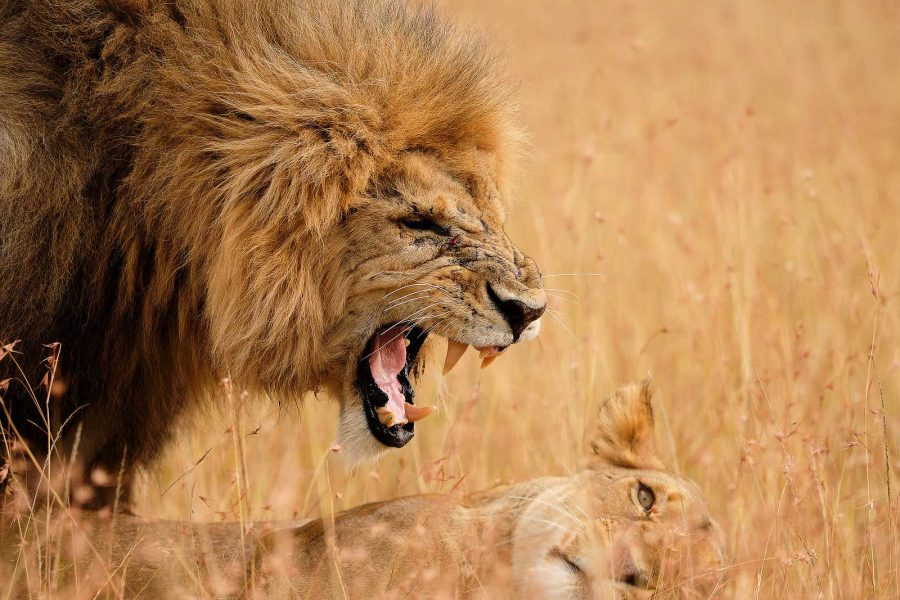 As a wildlife photographer, an encounter with wild lions in their natural habitat will certainly be a “tick” on your photographic bucket-list. But despite their enduring popularity on safari, they aren’t as common or as widespread as many believe.

Like any wildlife, sightings are never guaranteed – even in areas considered to be hotspots. This article will cover the best locations to find and photograph lions, tips on how to actually find them using fieldcraft, some useful camera settings and, hopefully, some ideas you may find inspiring.

Before we continue, any article concerning wild lions would not be complete without mentioning their conservation status.

Due to their ongoing population decline, the International Union for Conservation of Nature (IUCN) declared African lions (Panthera leo) as ‘vulnerable’ in their 1996 assessment. Furthermore, their population has continued to decline by 43% between 1993 and 2014.

The World Wildlife Foundation (WWF) estimate that only around 23,000 lions remain in the wild in Africa. In comparison to other vulnerable species, there are thought to be around 415,000 elephants, and 25,000 black and white rhinos. This comparison isn’t meant as a conservation contest, but to give context to and highlight the alarming plight of this iconic predator.

I strongly believe all wildlife photographers and filmmakers should try to use their work to highlight conservation needs. Also, consideration towards where and how we should photograph wild lions can greatly enhance your ethical and sustainable approach.

Where to photograph lions

My own experience of photographing lions is in the Masai Mara in Kenya, and Greater Kruger in South Africa. Other areas considered hotspots for lions are:

South Africa’s Greater Kruger is home to the majority of the country’s lions. It is made up of a National Park and various smaller private reserves, such as Sabi Sands and Timbavati.

Lions can be found throughout, but the best access for photography is usually in the quieter and smaller private reserves – especially where careful and considerate off-road driving is permitted.

Kenya’s largest lion population exists in the Masai Mara, part of the greater Mara-Serengeti ecosystem. The Masai Mara shares a border with Tanzania’s Serengeti National Park to the south.

The Masai Mara ecosystem consists of the Masai Mara National Reserve, The Mara Triangle, and several bordering private conservancies to the north such as Naboisho, Olchorro Oirowua, Lemek, and – the newest and most northerly – Enonkishu.

This is because I believe in the evidence that tourism is more sustainable and beneficial to local communities and conservation groups in the conservancies than it is in the National Reserve. Also, the private conservancies have a limit to the number of tourist properties and vehicles. Finally, rules at wildlife sightings are also more rigorously enforced and adhered to.

Together, this generally means there are less people and vehicles in the conservancies. Conservancies also allow careful and considerate off-road driving, walking safaris, and a more relaxed approach to being out at night.

Recent evidence from conservation organisations in the Masai Mara ecosystem points to increasing densities of wildlife, particularly predators, in the conservancies.

In summary, your choice of where you choose to photograph lions can be influenced by many factors, as well as the presence of lions.

Once you’re in the field, there is still a fair bit of fieldwork to be done. This is where procuring the services of an experienced and qualified guide can be the most significant factor in your success.

A good guide is likely to be part of an informal intelligence network with other guides where they share information amongst themselves. Through experience, they will also know of favoured areas such as watering holes, patches of dense vegetation where lions may rest in the shade during the day, and where a lioness may have temporarily isolated herself from the pride to give birth to cubs.

Experienced guides are very good at recognising subtle changes to the habitat. Fresh claw marks on trees or subtle changes to the landscape: is that a broken tree trunk, or is it a lioness sitting in the grass? Familiarising yourself with the footprints and faeces of lions can help identify recent movements, but this is not simple fieldcraft.

Read more: How to Photograph Elephants in Africa

Predators are often found by looking for the reactions of prey mammals. Most of the time, gazelles, zebras, impalas, and wildebeest will be peacefully grazing together. Their general demeanour can tell us a lot. Do they look relaxed? Or, are groups of them looking alert in the same direction and not feeding? Perhaps they are watching a predator. To the trained ear, the ‘snorting cough’ of a distressed impala and the ‘bark’ of a zebra are unmistakable alarm calls.

Other predators, especially scavengers like hyenas and vultures, can also be a give-away. The haunting noise from a clan of hyenas can indicate the presence of a carcass, possibly a fresh kill by a lion. It’s likely that other hyenas will be attracted towards the location too. So, “Follow that hyena!”

A “kettle” of circling vultures can also be a clue to the whereabouts of a kill. But, it is also likely that a “wake” of vultures actively scavenging can mean the carcass has been there for some time. Either way, it’s safe to say there are far too many collective nouns for vultures!

You’re more likely to find lions out in the open at the earlier hours of daylight and in the evening. Although they are certainly very opportunistic, you’ll be rather lucky to see a hunt during the day.

Lions spend most of their day asleep, often in the shade of vegetation to keep cool. Try to note down and remember their locations when they are inactive; this can increase your chances of finding them later in the day or the next morning when they may be more active.

Together, this fieldcraft can lead you to predators like lions. But to many people without experience, these clues are very easy to overlook. To an experienced guide, however, it can be much more obvious.

I recommend using a DSLR or mirrorless interchangeable lens camera.

Having a wide range of lenses is useful. My own preferences are a 100-400mm telephoto zoom for versatility, together with a shorter lens such as a 50-140mm or 70-200mm. A wide-angle to mid-range zoom lens is also useful for evening sunset photography.

I always pack a polariser and a couple of ND grad filters too. Tripods aren’t usually practical to use in vehicles, but a monopod or beanbag can be useful. Dust covers and basic camera / lens cleaning equipment are a must, too!

In the past, my preference has been to use aperture priority to give me easy creative control over the depth of field. I would then use ISO to control my shutter speed, with liberal use of exposure compensation to fine tune exposure.

More recently, I’ve become an advocate of setting my desired aperture and shutter speed and allowing auto ISO to achieve the exposure.

Your chosen method of exposure control should be the one which you are most used to using and familiar with. There is no such thing as right and wrong here; it’s more about personal preferences.

I’d recommend using your camera’s continuous AF option. For me, using Fujifilm cameras, this is AF-C – as it also is with Nikon and Sony. Canon use the term AI-Servo, and Olympus use C-AF.

When activated, the autofocus will work continuously to evaluate the distance between you and your subject to achieve focus. It is the fundamental autofocus setting for moving subjects.

We can further customise autofocus to use a single point or zones or groups of points together ‘dynamically’, depending on your camera. With any lion encounter, I start on the basis of using a single AF point positioned over the eye or head depending on the distance. The AF point I choose will be determined by the composition I desire, taking into account surroundings and how the lion is moving or the direction in which it is facing.

If the lion’s movement is too fast or perhaps erratic and I cannot accurately keep the single point on the eye or head, then I choose to use zone focusing (or group, dynamic etc. – refer to your camera manual and its own terminology).

I’d recommend unleashing your camera’s full burst mode / frame rate. Take care not to be a “machine gunning” photographer, though. Lions spend a lot of time doing nothing and you’ll only end up with hundreds of photographs of exactly this: lions doing nothing!

Where your burst mode will come in useful is when you get a little bit of action. A lion yawning is a good example. A burst of a few frames in a fraction of a second can help you capture the action and the detail: the mouth at its widest, the full canines, or their lethal carnassial shear.

If you’re lucky enough to see a hunt, the same theory applies. But be aware of filling your camera’s buffer too early and rendering yourself unable to take further shots for a period.

Review your images in the field

Take a quick look at your images whilst shooting, especially the histogram and flashing zebra / highlights on playback. Mirrorless users have a little advantage here, as you can keep these things enabled in your EVF.

Remember, it’s easy to overexpose key parts of lions – especially the muzzle and the white patches around the eyes.

Lions are incredible to photograph, and being within just a few yards of them in an open vehicle is a wonderful experience. Pay special attention to your guide’s instructions, especially when they are close. Remain quiet, do not stand up, and don’t make sudden movements.

Lastly, remember to take the camera away from your eye now and again and just enjoy an incredible experience.