Photographing Bats in Flight (in the UK) 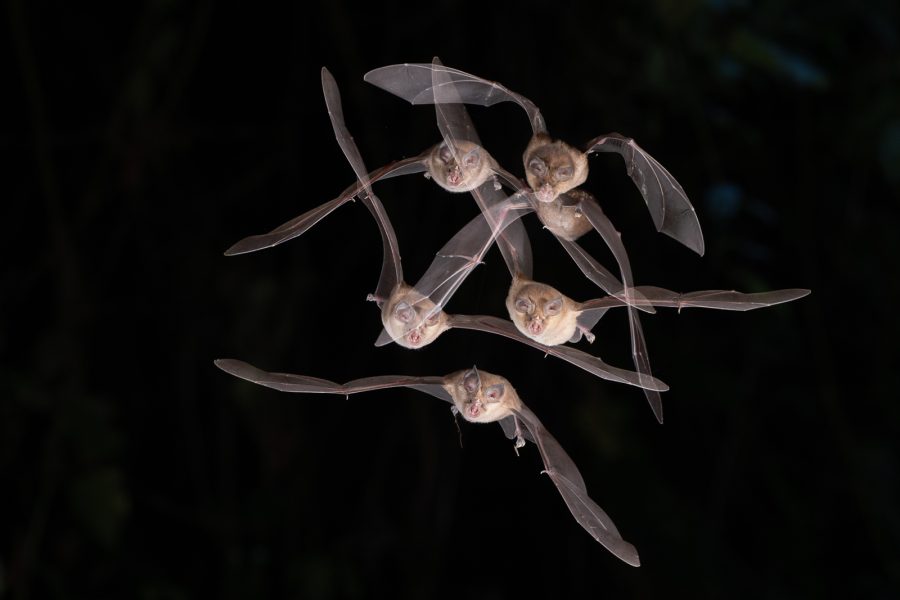 Preface: the images featured in this article were taken under license from Natural England. It is strongly recommended that you check the legal status of bats in your country and consult with an expert bat ecologist before undertaking this type of photography.

Bat ecology and the law

Most bats are nocturnal. They navigate around the night-time landscape and locate their insect prey using echolocation (or in some highly specialised species, using hearing). They typically emerge from their roost sites at dusk or soon after.

Roost sites can be found in a variety of locations, including buildings and bridges, in underground sites such as caves and mines, and in tree cavities. Bat populations are under threat worldwide, and a number of species in the UK, including the horseshoe bats referred to in this article, are now quite rare. 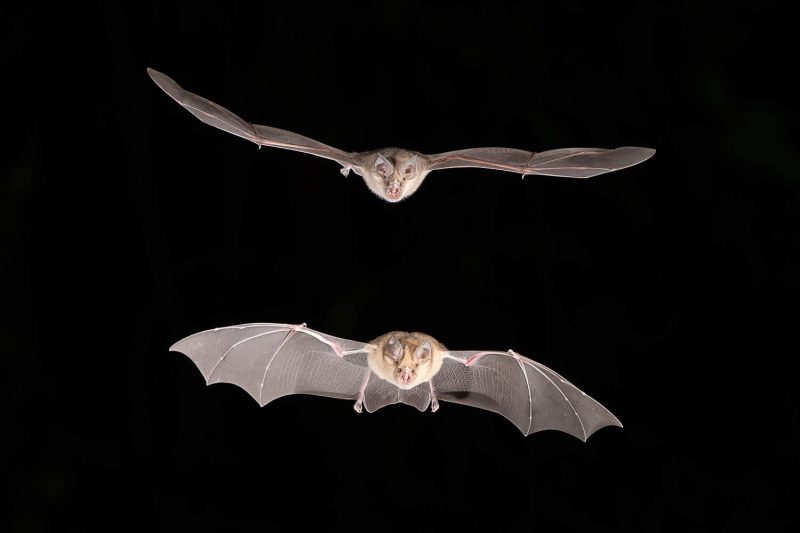 As a result, in the UK bats and their roosts are strictly protected, and a special license is required to carry out activities that might disturb them – for example, undertaking internal roost surveys, or carrying out photography in the vicinity of a roost. Bats are particularly vulnerable when exiting or returning to their roosts.

During the first Covid-19 lockdown in spring 2020 I was, like many nature photographers, confined to base. Consequently, I began to search for a challenging project that could be carried out in our garden.

For some years I had wanted to photograph bats in flight as part of my work as a licensed bat ecologist. Lockdown seemed to offer the perfect opportunity to experiment with this, as we have a small roost of lesser horseshoe bats in a woodshed at the rear of our property. 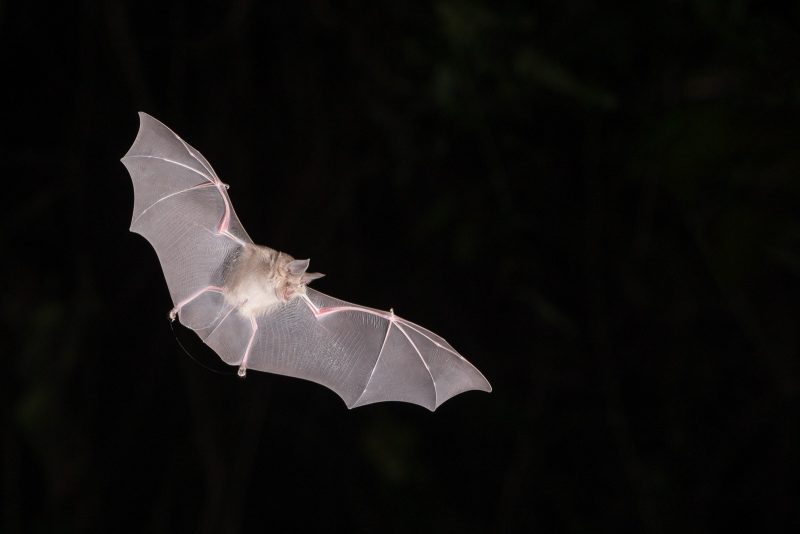 I have monitored this roost for over 15 years, and the use of photography to check the times of bats coming and going seemed to be a useful adjunct to the ongoing monitoring. I carried out the photography under my Natural England bat licence, which covers me for use of normal flash within and at roosts, as an incidental part of my ecological survey work.

Regardless of my licensing permitting me to legally use flash, I was going to be photographing at a roost entrance. So, I wanted to be absolutely certain that bats would not be disturbed. 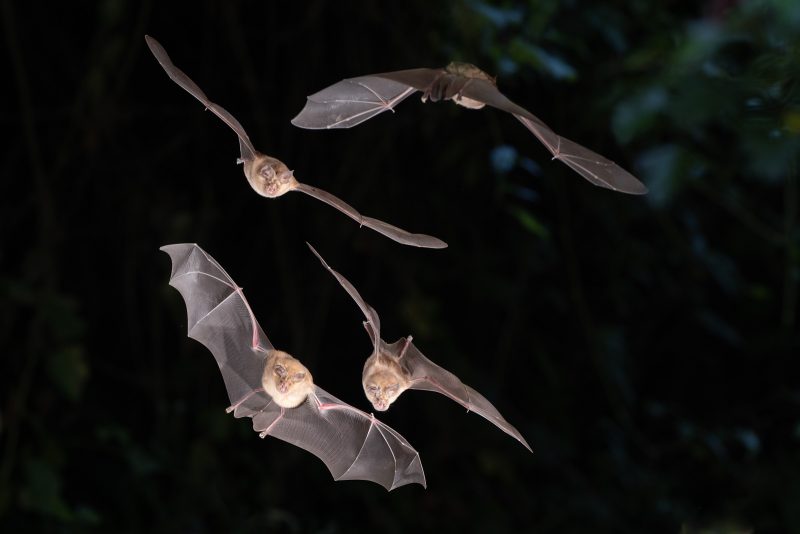 Therefore, I used a ‘full-spectrum’ converted camera (a Sony A7 III) and four Cactus RF60x flash units, to which I fitted home-made 720nm infrared (IR) filters.

IR lighting is not visible to bats and, as well as avoiding any possibility of disturbance, in my opinion it also produces a more natural looking (monochrome) image, which reflects the fact that humans do not see in colour at night.

Read more: How to Photograph Bats

In theory, the simplest way to photograph bats in flight is to illuminate them solely using flash, whilst the shutter is held open on a long exposure. To achieve this, I operated the camera in continuous shooting mode, with shutter speeds of between 20 and 60 seconds (depending on how many bats I was expecting).

With long exposures, there is a possibility of getting more than one bat in frame at a time, which can be used to great creative effect. However, when working at a roost with IR flash, I prefer a more ‘realistic’ effect, with just one bat in the frame and the roost entrance visible/ in focus.

This requires a shorter exposure of perhaps around 8-10 seconds, in order to avoid bats overlapping in the frame. 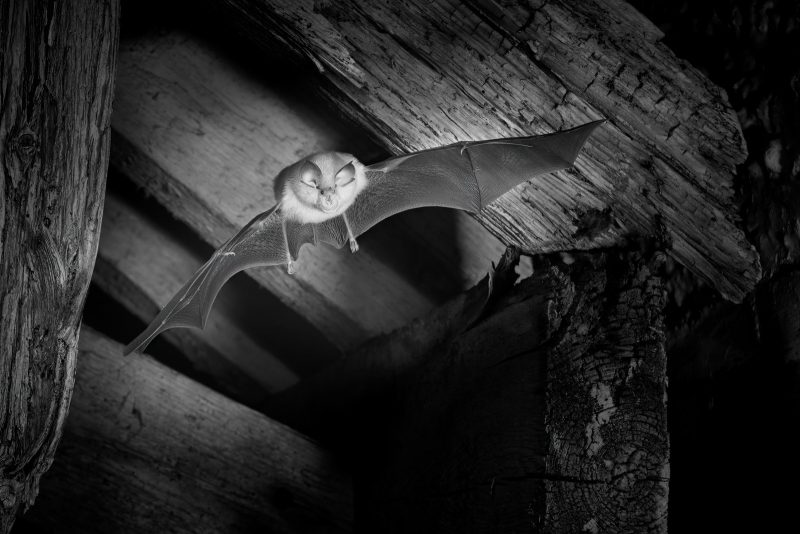 The flashes obviously need to be triggered when a bat is in the desired place in the frame, and therefore some kind of movement sensitive device is needed.

I chose the Cognisys ‘Sabre’ LIDAR system, since this has a fast response time, and is a weather sealed, stand-alone unit that does not need a separate receiver. This system proved very helpful whilst working at height, and in locations that were difficult to access.

Working through the issues

The first challenge I encountered was working out how to accurately focus on the precise point where a bat would be breaking the laser beam (thus firing the flashes), but also making sure it would be nicely placed in the frame, to create a good composition.

I solved this by using a (removable) rod on which to manually pre-focus. The rod was set up parallel to the beam and around 1cm from it. This distance took into account likely bat flight speed, as well as the very small delay from the point the beam was broken, to the flashes actually firing. 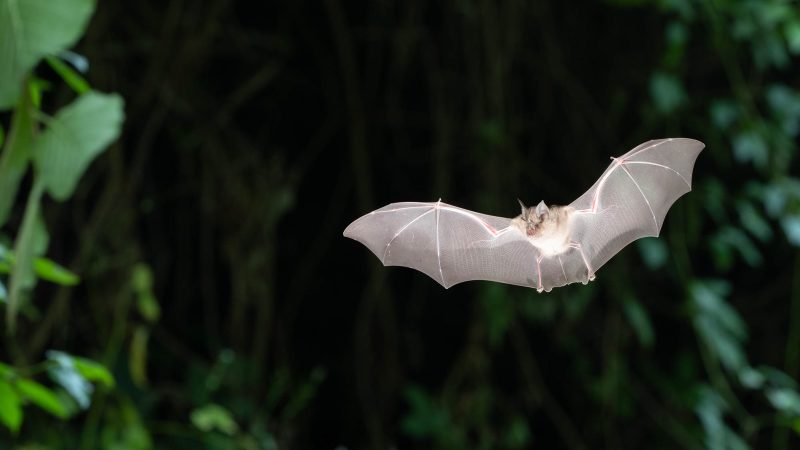 Once I had gained sufficient confidence working with IR flash close to a roost (i.e., in a location where I could confidently predict bats would be flying regularly, albeit in low numbers), I began to work further from the roost, in locations I anticipated might be frequented by bats on a reasonably regular basis.

In such situations, I felt that daylight balanced flash would be acceptable, provided it was used at very low power settings to minimise disturbance. (Note that non-IR flash was only used well away from a roost entrance).

Setting flashes on manual mode at a power setting of 1/16th to 1/32nd gave me a flash duration of between 1/8000th and 1/12,000th of a second, which was more than fast enough to stop flight action.

A nicely exposed image was obtained at an aperture of f/10 at around ISO 400, with all flashes positioned at just over 1m from the focus point (any closer would have obstructed the flight path).

The use of non IR flash meant I was able to use my usual cameras (Olympus EM1x, EM1 III, and Sony A7r IV), with lenses ranging from short and cheap ‘kit zooms’ (which worked surprisingly well), to longer telephoto lenses, such as the Olympus 40-150 and the Sony 100-400.

The longer focal lengths enabled me to set up around 15-20 feet from the focus point, and avoid blocking potential bat flight paths with the camera.

The equipment was set up to run all night, in order to give me the greatest chance of capturing what would be, in all likelihood, a very small number of bats passing through the frame! 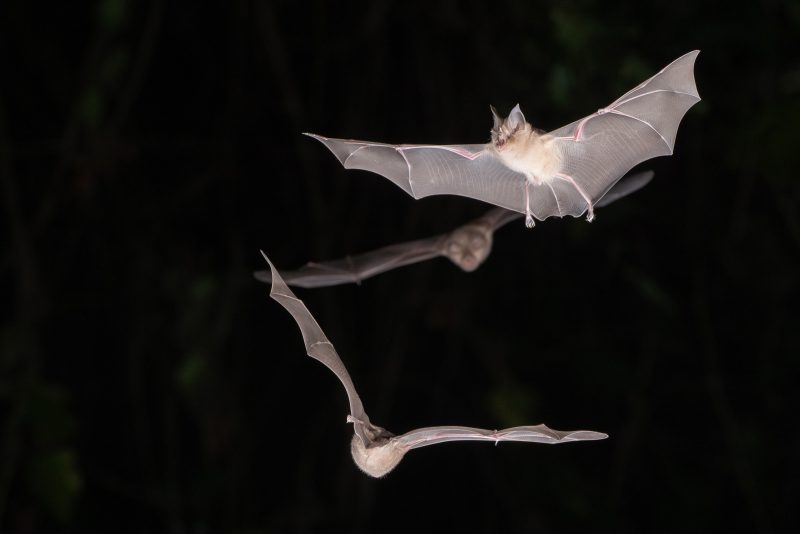 To allow all night operation I powered the flashes with rechargeable Eneloop AA batteries, and the cameras with 20,000 mAh Anker power packs, linked by Tether Tools ‘case relay’ couplers. The Cognisys Sabre has an internal rechargeable battery, and it will run all night without a problem.

After a couple of months of experimentation in the garden, I had begun to develop a portfolio of images that was starting to generate interest from several quarters.

By summer, I was lucky enough to be able to work with the Vincent Wildlife Trust (a UK-based conservation charity), to help promote their work through photography of greater horseshoe bats at one of the most important roost sites in the UK. 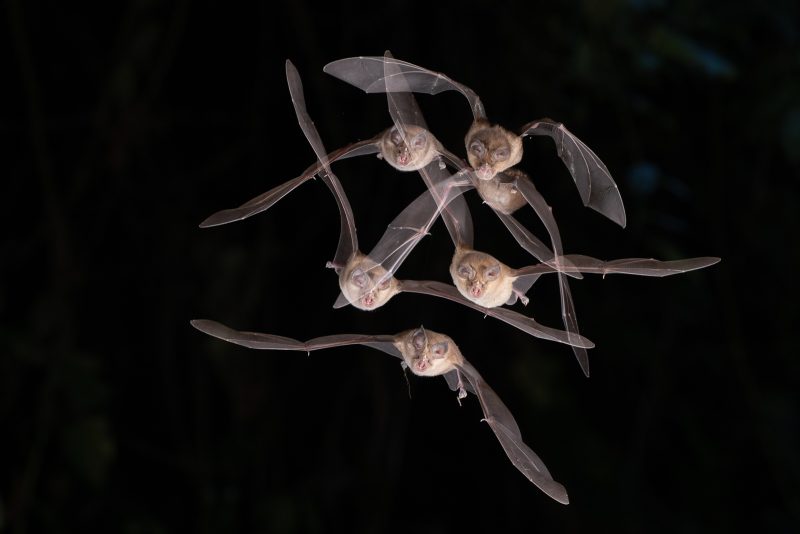 This was a tremendous privilege and I consider myself extremely lucky to have been given this opportunity. My images have since been used for their marketing and direct fund-raising purposes.

My bats-in-flight project has been running for two years now and, whilst I have taken some images I am really pleased with, I have also learned that if something can go wrong, it will!

It is still by no means uncommon that a shoot results in no bats being photographed at all, bats being partially out of frame, or bats being out of focus. This can be due to set-up errors or, in one case, as a result of an animal (probably a badger) having knocked the camera tripod slightly out of position!

Hopefully 2022 will see further progress, with more, better quality images from a wider variety of species!