Composition in Wildlife Photography: Getting Creative 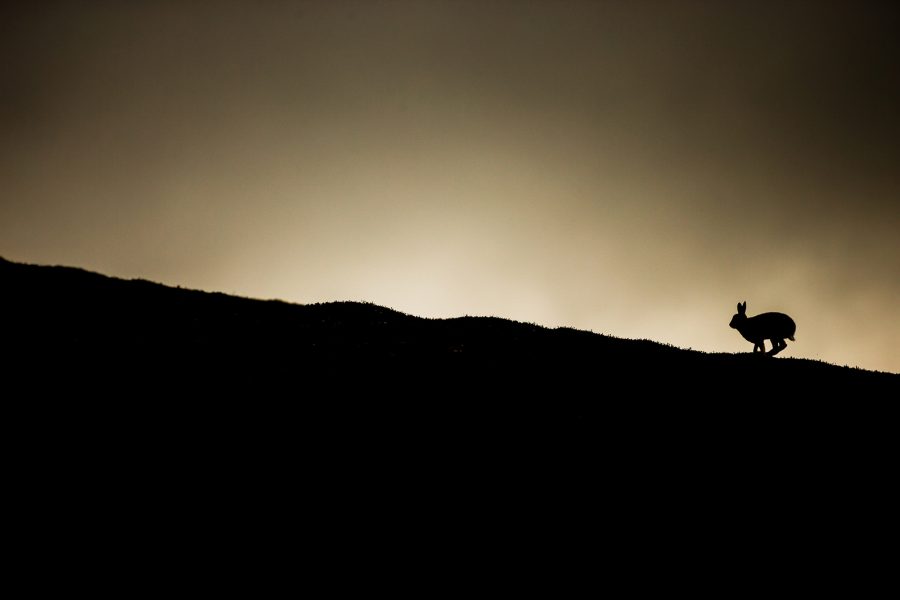 Composition can make or break a wildlife photo. It affects what you want your image to say, and how well it is conveyed. Simply put, composition in wildlife photography – and all genres – is how the different elements in an image are arranged.

There are many guidelines to help you compose an image, from the rule of thirds, leading lines, subject placement, and camera angles to name a few. In this article, I will show you how best to compose your images creatively.

1. The Rule of Thirds

When we talk about composition, the first idea which pops into many photographers’ heads is the rule of thirds.

The rule of thirds are magical lines that divide an image into nine equal parts, using two horizontal lines and two vertical lines. In theory, we should always place the most important components on the intersections of these lines. Aligning your subject on these points creates more balance in the image than simply placing it in the centre. 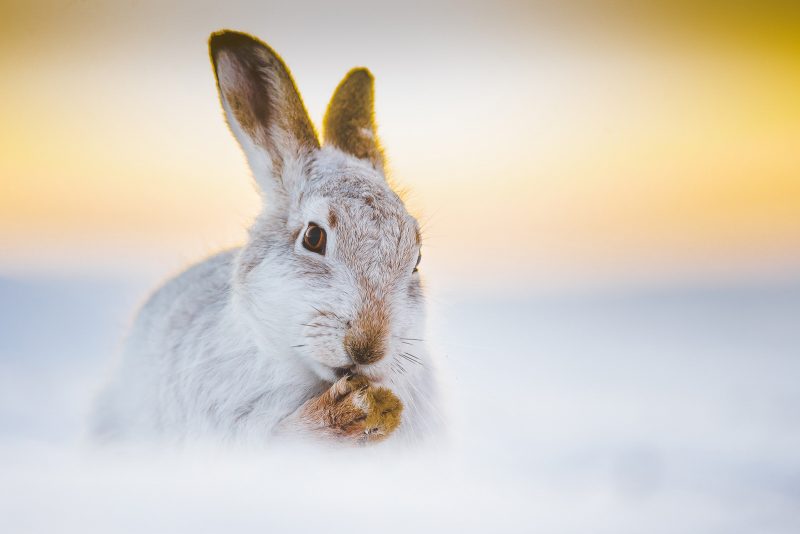 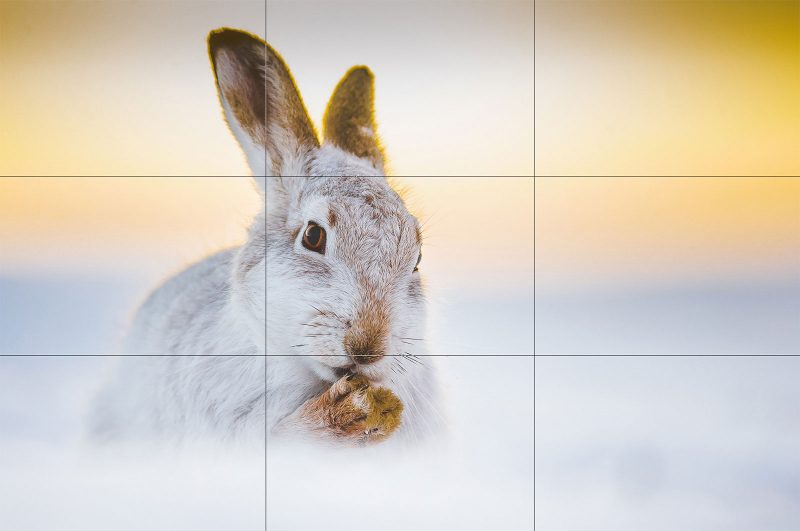 The rule of thirds is a great starting point to compose an image. But once you understand the basics of this principle, look to break the rule. After all, it’s only a guideline.

The issue with composing your images by only using this rule is that you run the risk of your work becoming sterile and a little one-dimensional.

Look to “shock” the viewer and make them feel a little uneasy with an out-of-the-box composition. This will help stop viewers in their tracks and make them give your image a second glance; this might just help your image stand out from the crowd. 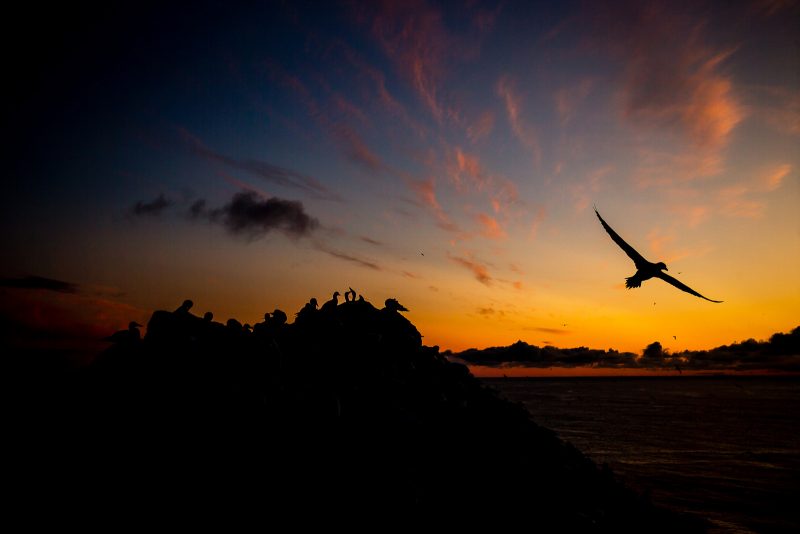 Don’t be afraid to take a chance and break these core “rules” of photography. You will never please everybody, but by shooting outside your comfort zone and creating your own style, you will at least be treading your own path.

The background of your image can be just as important as the subject – it plays a huge part in composing your wildlife photography. If the background has any distracting elements, it can greatly detract from the final image by drawing your attention away from the subject.

Ideally, as wildlife photographers, we are looking for a soft, out of focus background isolating the subject. The image below, of a northern gannet, is a perfect example of the clean backgrounds we often strive for.

To frame this image, I used a distant cliff face which I knew would catch the last rays of light. As expected, the sunset over the horizon bathed the cliffs in a beautiful golden light. It was simply a case of dialling in an aperture of f/4 to keep the background smooth and then lining the gannet up against it. I find this approach of visualising an image before pressing the shutter helps enormously. 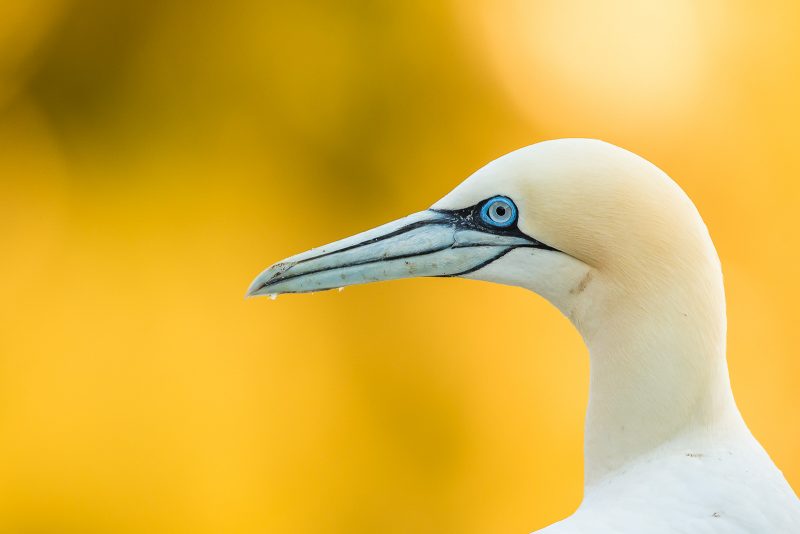 Backgrounds are constantly changing. This could be, for example, due to changes in the light or the season. Try experimenting in your local woodland.

Watch as the foliage changes throughout the year and how the falling light changes its appearance. Your background may be a lush green through the summer months, or patterns of gold throughout the autumn. Only by spending time at these locations will you learn how to use it to your advantage. 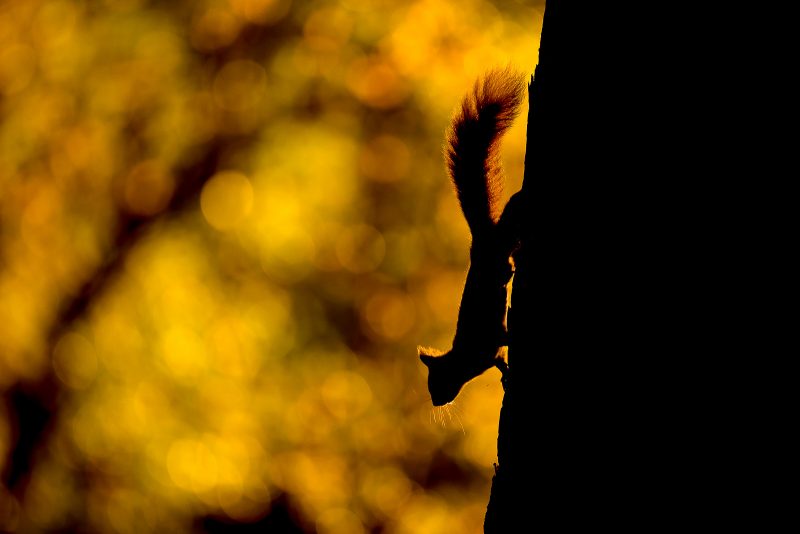 Composing your images creatively doesn’t just mean using natural landscapes as your background. I took this gannet image at the same spot as the previous image. Instead of using the cliffs as the background, I decided to use a wide aperture of f/4 and frame it with the other birds as the background. Using a shallow depth of field and picking out one bird in the chaos can be an effective technique. 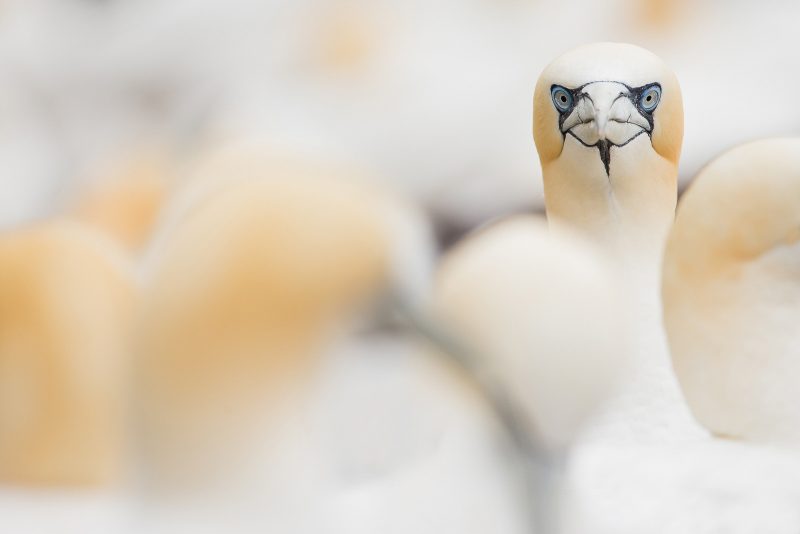 Whilst reading photography tutorials, you see so many tips about watching your backgrounds – but just as important is watching your foregrounds. Using foregrounds to your advantage is an easy technique to master, and can often help to hide distracting elements.

The simplest way is to create foreground “mush” is to shoot through vegetation, using the widest aperture of your lens – ideally f/2.8 or f/4. The shallow depth of field will throw the foreground out of focus.

Each summer in the UK, around late June, the pink thrift comes into bloom across Shetland. I try to time my trips to the seabird colonies to coincide with this bloom.

As a side note, the black background was created by underexposing the image and shooting into a distant cliff face that had fallen into the shade. 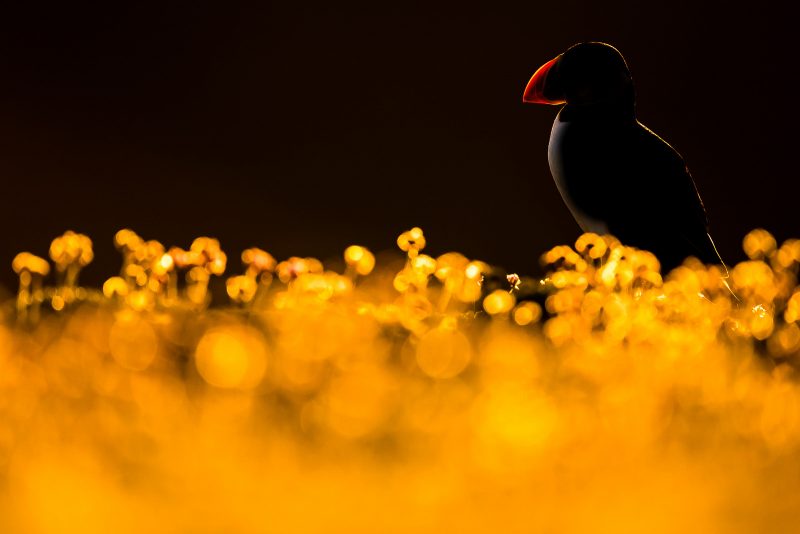 Another way to shoot interesting foregrounds is by shooting low through the snow. If done correctly, it can create beautiful high key shots and can help hide any distractions.

One afternoon, I found this hare resting in its form. There was beautiful clean white snow behind, but messy pieces of dark heather in front. 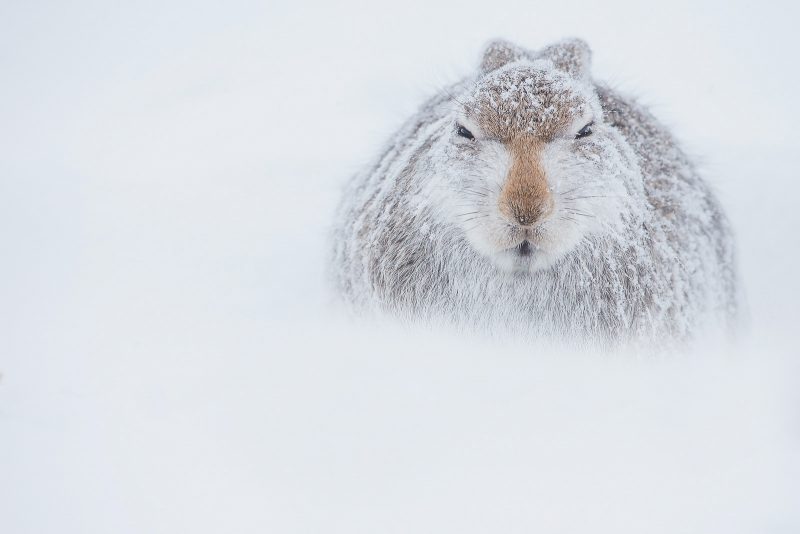 Sometimes you need to be a bit intuitive. By building a snow mound between myself and the hare, I was able to shoot low through the snow and blur the out of focus mound. This removed the distracting heather from the image.

The negative space in an image isn’t always something photographers first think of. It’s easy to get caught up on the main subject of the frame.

Negative space is an important element in composing a wildlife photo. Where the subject is framed, and how much space surrounds, it can greatly alter the viewer’s perception of an image.

In wildlife photography, this can often be an empty space for an animal to run into or a wider view of the  subject’s habitat. 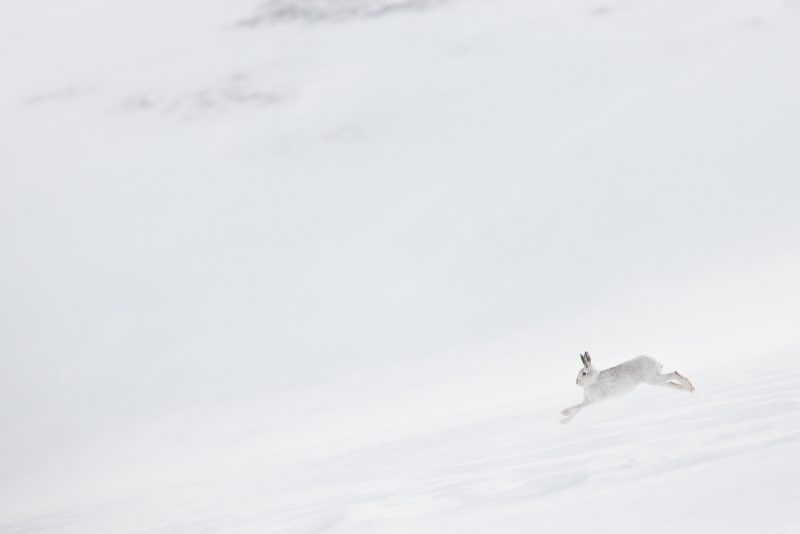 Negative space helps to tell the story of your image; it creates a mood. Take this image of an Atlantic puffin at Hermaness NNR, for example. The subject of the image is the puffin, but it is the negative space that tells the story.

The open sky and sea below creates a sense of freedom and desire for exploration. It brings about many questions and thoughts. What lies beyond the horizon? Where has the puffin been? Where is it going?

Now, imagine I shot this image using my 500mm lens. Yes, I would have a fairly average full-frame shot of a puffin. But by excluding all the visual space, the image would not be able to tell this story. It can be easy to always shoot your image tight in the frame. But take a step back and think “is this the story I want to tell?” 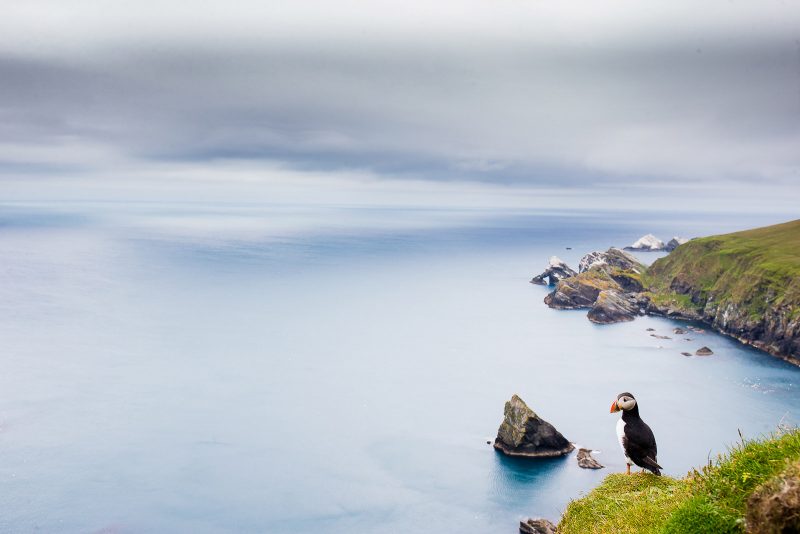 When shooting animals moving, such as a bird in flight or a mammal running through your frame, negative space is an important factor to consider. If you are framing a bird flying from left to right, you don’t want to frame it up against the right-hand side of the frame. Give the subject room to breathe – it’s more pleasing on the eye to show the bird flying into the frame than out of it (think back to the rule of thirds, too).

Each day we are treated to amazing images posted on social media and in competitions. Draw inspiration from these images, but don’t just imitate them. We all need to find our own photographic style, so don’t let compositional rules define your work. Instead, shoot what you love and not what you think everybody else will expect.

Composing an image is just as important as your subject. It’s the composition that helps to tells the story. So next time you are composing an image, think what story you want to tell.

Hopefully these tips have inspired you to get out, break the rules, and get creative with your compositions. Good luck!