How to Photograph Puffins 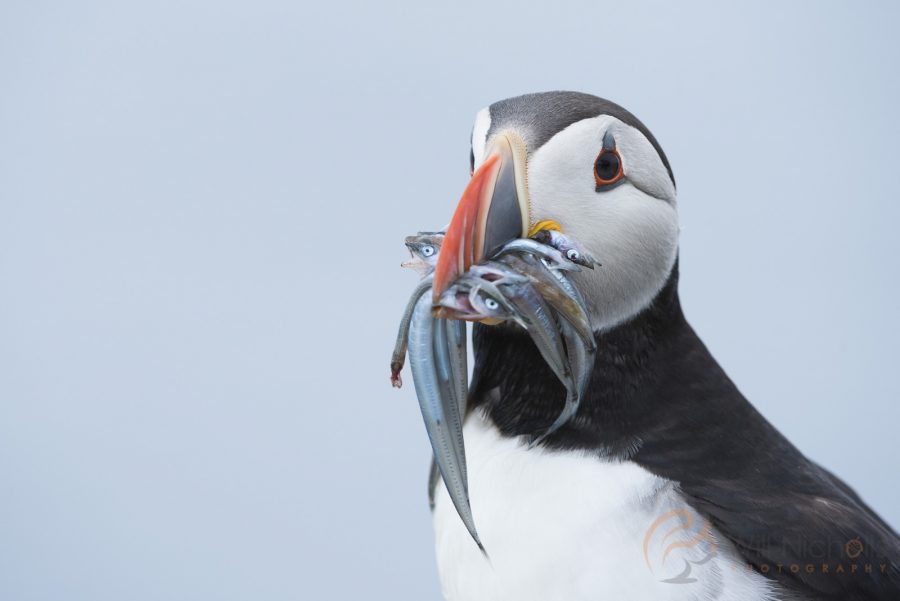 Also known as the sea parrot, Atlantic puffins are a popular seabird amongst photographers. Their charismatic beaks are brightly coloured during the breeding season, making for beautiful imagery. However, the window of opportunity is short as puffins only return to land over the summer months, spending the rest of the year living at sea. These stocky birds are not land lovers, and are instead much more suited to life on the waves. Their short, stubby wings are great for swimming and propelling them underwater to find fish.

Puffins are found from the east coast of Canada over to the west coast of Europe, and are consequently accessible to photographers around the world. But with so many people taking photos of the same bird, how can we work to get something unique? Let’s take a look at how best to photograph puffins.

Where to Find Puffins in the UK

We’re very lucky in the United Kingdom that we have plenty of nature reserves where we can go to see puffins. Some areas can be accessed on the mainland, whereas others require a boat trip across to an island where you can land and walk around these unique nesting sites. Activity starts around the end of May, peaking in June, and tailing off in the middle of July.

Arguably the most popular area for photographing seabirds, the Farne Islands in Northumberland plays host to 80,000 puffins and scores of other species. Land on the islands and walk around just metres from puffins – but make sure you wear a hat or the Arctic terns will dive-bomb you and give you a nasty peck!

Coming in at a close second, Skomer Island in west Wales also allows for photographers to land and walk around the island. It is perhaps more picturesque than the Farnes, but numbers of visitors are more limited.

Other possibilities include Bempton Cliffs, Skokholm Island, St Kilda, and the Isle of May. This is by no means an exhaustive list, but these are the most popular places to see puffins in the UK, and for good reason.

Further Reading: “Top 10 Locations for Wildlife Photography in the UK“

Every summer the internet is filled with photos of puffins. The classic shots of puffins we see again and again, but they are addictive and you never really grow tired of them. You can’t help but take a simple portrait of a bird using a nice, soft bokeh. Everyone does it, but I highly recommend you follow suit, especially if it is your first time photographing puffins. Do it well, and you will be proud of the results. Add some sand eels and you’re onto a winner! 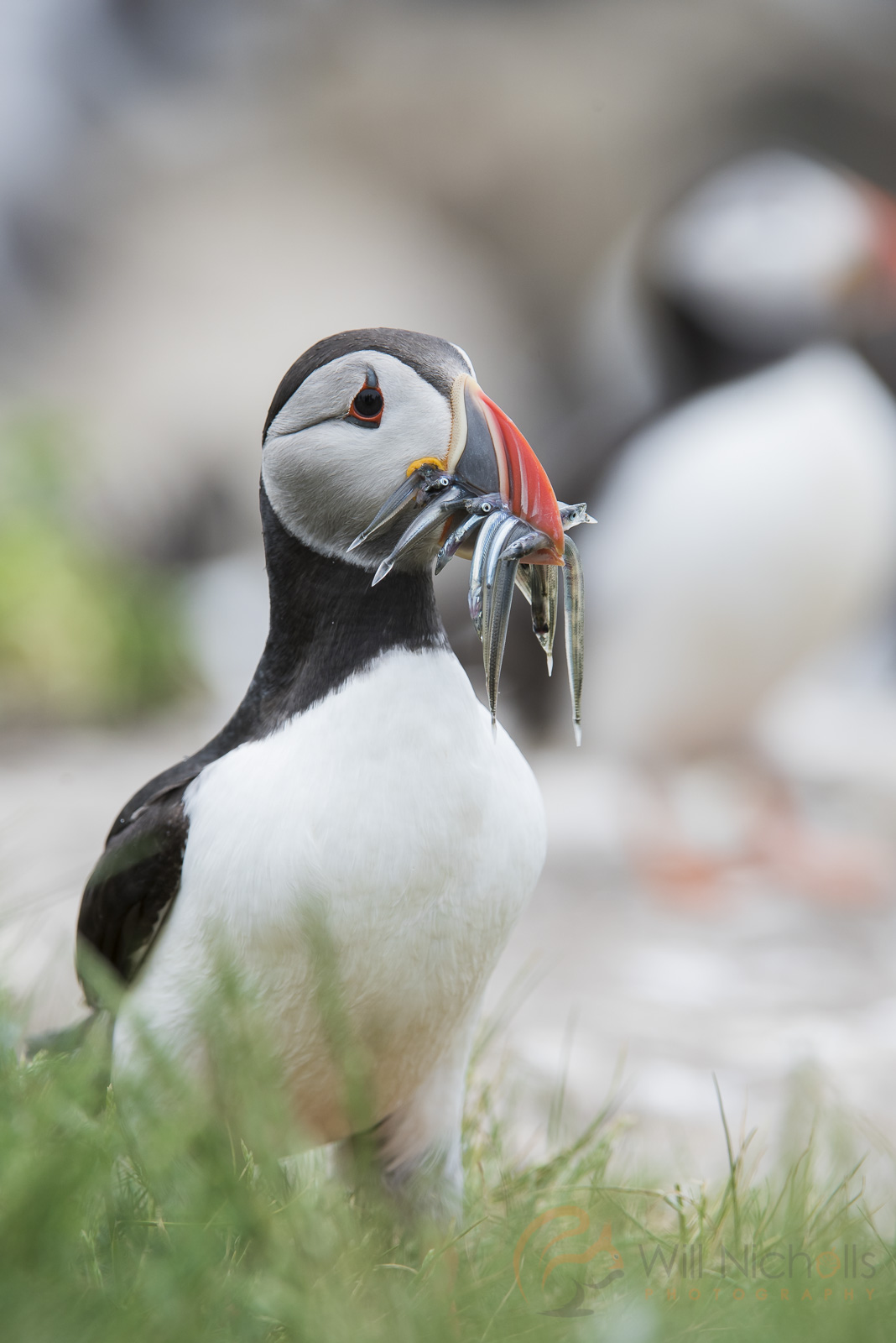 The next one to tick off your list is a flying puffin. If puffins are nesting, then the sky will be filled with birds returning to their burrows (yes, they live underground) and you can capture photos of them in flight. Lots of the images we see are taken with the bird against the sky as a backdrop. These tend to be fairly boring, lacking colour and imagination. Instead, position yourself so that grassy areas or other interesting colour schemes are behind the puffin. You’ll need to think about your angle of view here to achieve this (it can help to get to a slightly higher point).

But if you want your images to really stand out from the crowd, then it’s time to focus on something a little different. Your success rate may plummet, but your ‘wow factor’ will increase when you do get lucky.

Puffins live fascinating lives. Once they have returned for the breeding season, they cope with the hustle and bustle of colony life. With thousands of birds, of many different species, all crammed onto one sea stack or island, interactions are guaranteed. They are often fast, most likely out of view or too far away, but if you keep your eyes peeled and are patient you may eventually strike lucky. After about 6 years of visiting the Farne Islands, I finally caught the moment a lesser black-backed gull swooped down to steal the sand eels from a puffin that had just returned to its burrow. This is known as kleptoparasitism.

It’s totally down to being in the right place at the right time, and more often than not I would probably miss such an interaction or find it obscured from view. But there are plenty of less aggressive aspects of a puffin’s life. You may see puffins courting, batting their beaks together, which is a wonderful display to capture on camera.

Or, catch them flying home to their burrows, like in the photo at the beginning of this article, for another behavioural shot. An image I have yet to achieve is of a puffin sitting in its burrow. It’s a key part of their life, and therefore something special and a little different too. I think I still have some work to do…

Out of the Ordinary

Puffins are highly charismatic, and they are also rather comical. If you observe a small group of them for a long time, you’ll start to see quirky moves or angles that make for more interesting photos, rather than just a straight up portrait. Take this sleepy puffin for example, having a snooze on a rock near the edge of a small group I was watching. Stay observant and you’ll catch one off guard! 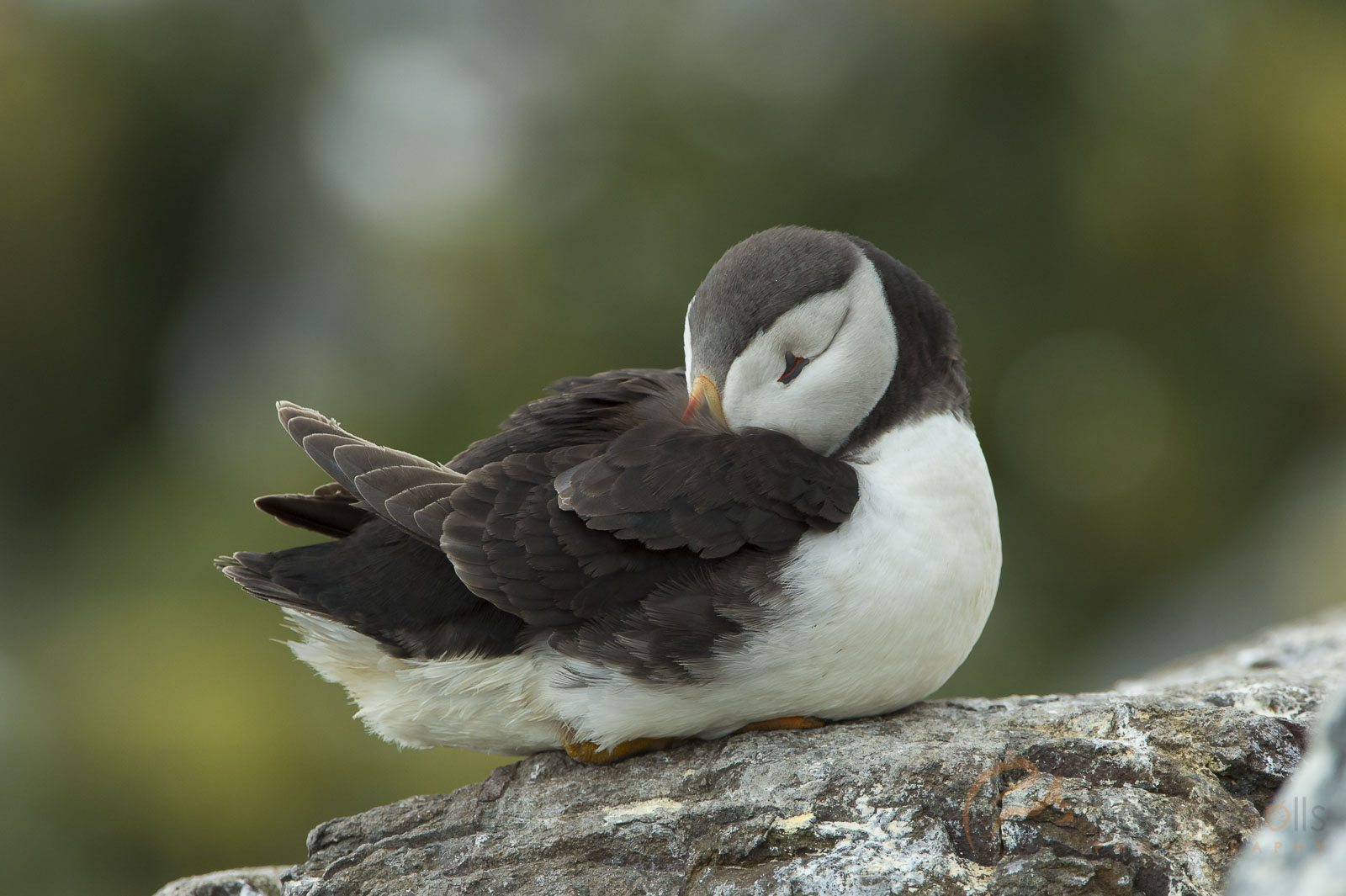 Sometimes puffins will appear to laugh. In truth they are displaying to each other, but as they rear their heads back with their beaks wide open, you would be forgiven for thinking otherwise. It’s not an overly common thing to see, and you need to be patient. But it’s another interesting thing to spice up your puffin photo.

True to their name, puffins often puff up, stretch and shake their feathers. If you see this, hold down that shutter and see what you get. It’s an action often performed after preening, which is another thing you will want to capture as you never know what it’ll result in. In this image, a puffin is tending to its feathers, yet it looks as if it is hiding bashfully behind its wing. 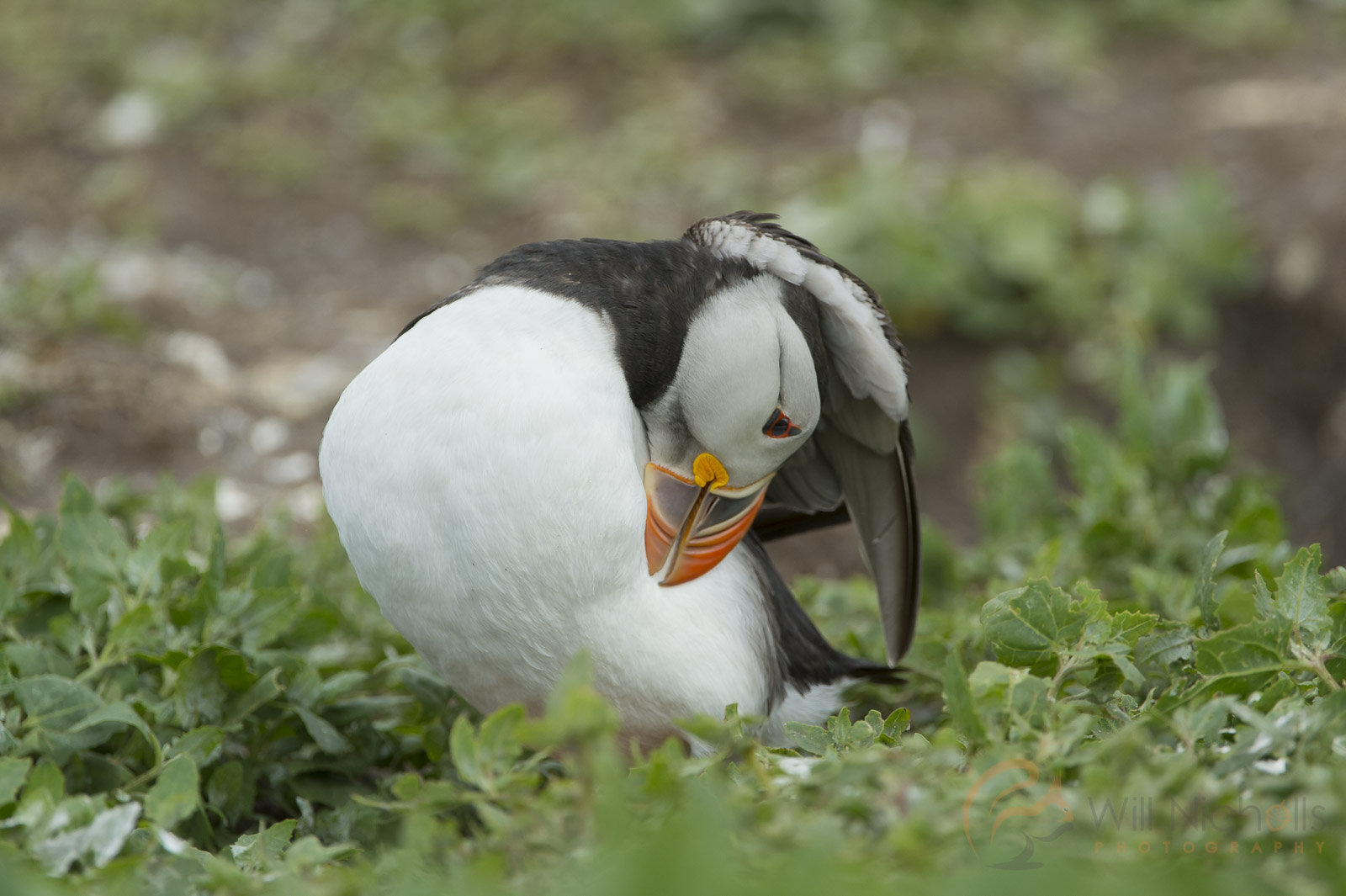 With limited time during your visit, it can be tempting to stick to basic settings and not experiment or push the limits of your equipment. If you can, take some time to try something different. For example, this puffin in flight image was taken with a slow shutter speed, blurring both the wings and the background whilst panning along. The result? I managed to convey the tremendous speed of puffins in a still photograph.

If you’re able to stay until evening (something that is possible on Skomer Island in the UK), then you may be treated to golden light as the sun sets. Use this to your advantage; you could try to backlight puffins – something I am unable to do on my visits to the Farne Islands.

Try a high-key style, shooting up into the clouds and overexposing the highlights in the image. It’s a tricky technique, and usually fails miserably, but if you’re lucky you might just get something good.

Compositions are another fun one. Forget the rule of thirds, and go for some really tight crops. Filling the frame with a puffin allows you to record every tiny little detail, down to the individual feathers or pores of the bird. Conversely, stick on a wide-angle lens and photograph a puffin in its environment. You can use this to capture the surroundings, other seabirds, and the general feel of the place.

Don’t stop shooting. Your time may be limited with the birds, but your camera isn’t. Fire off as many images as you like, try all sorts of compositions and capture every twitch a puffin makes. They’re great fun and adorable birds, so go nuts! This one certainly did… 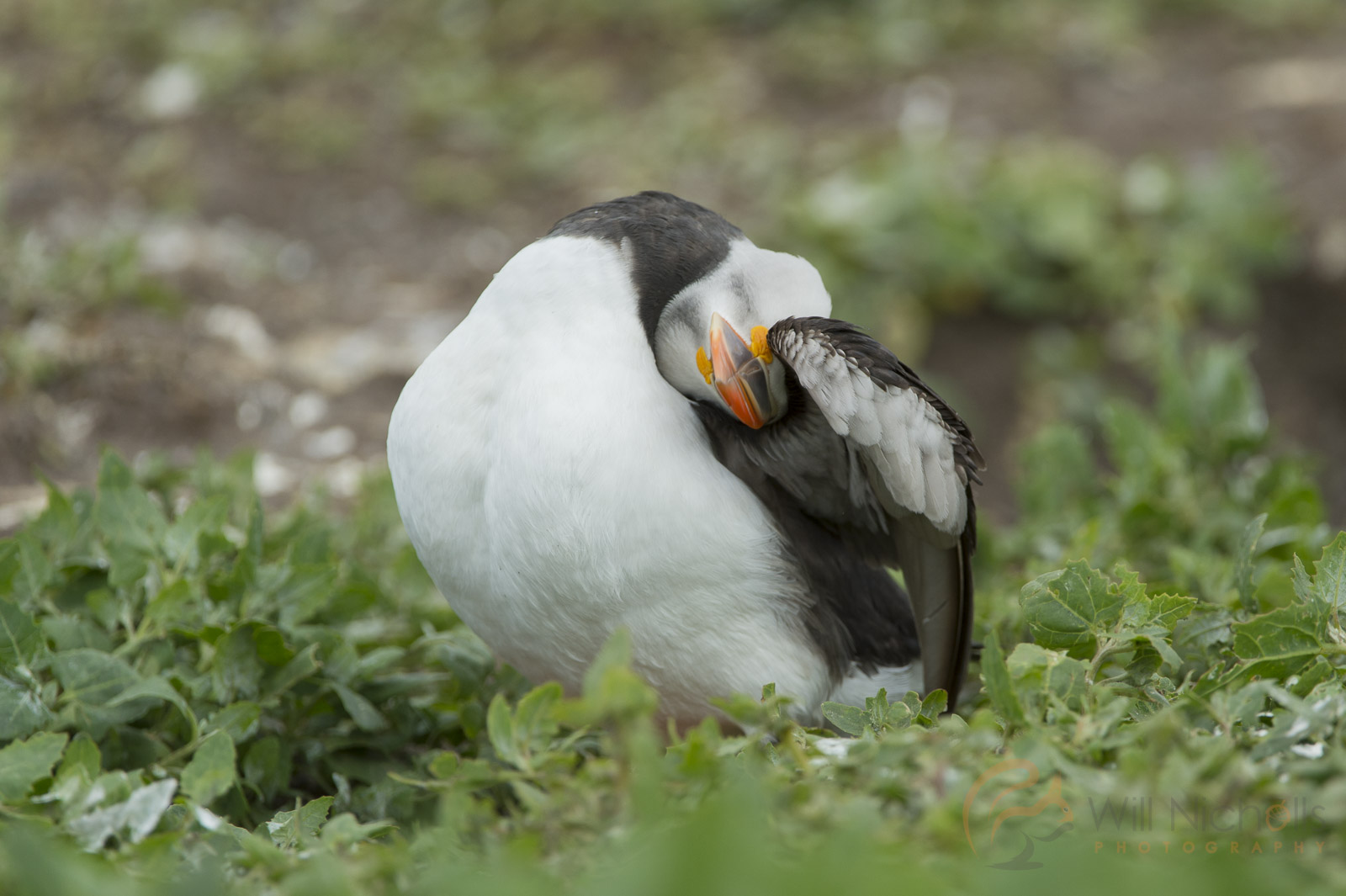