Backlighting in Wildlife Photography: Creative Use of Light 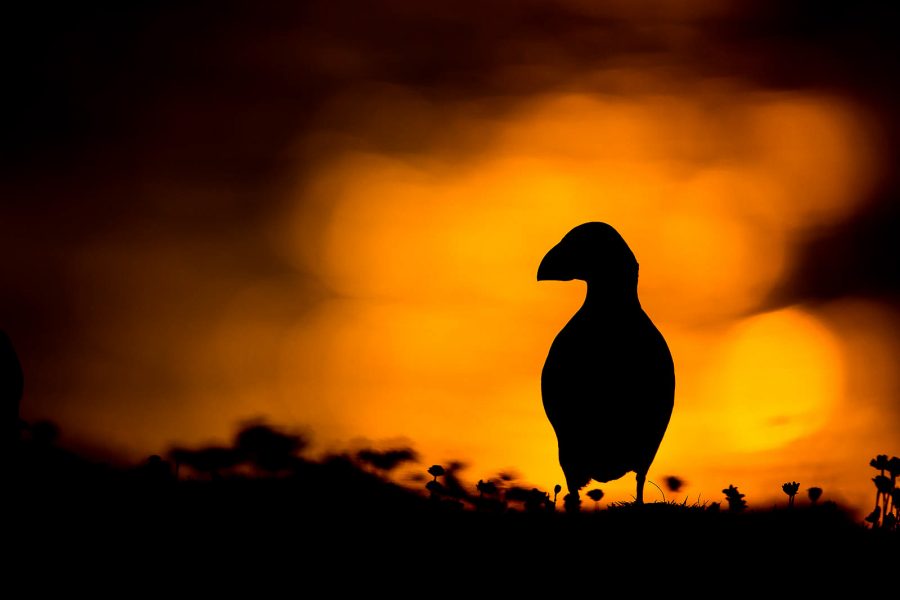 A camera is just a tool; light is what can transform an image into something truly breathtaking. As wildlife photographers, we are often exposed to the elements, working on a windswept mountain or rocky cliff edge. We don’t have studio controlled setups. So, we need to understand how light falls and the qualities it possesses. In this article, I will show you how best to use backlighting in wildlife photography.

The first thing I’d recommend you do is to leave your camera at home and head down to a local pond in the morning or evening. Just watch how the light falls on the pond over an extended period of time.

This will allow you to build an extensive knowledge of how the light falls at any given time of year. The knowledge gained will become one of your most valuable tools. 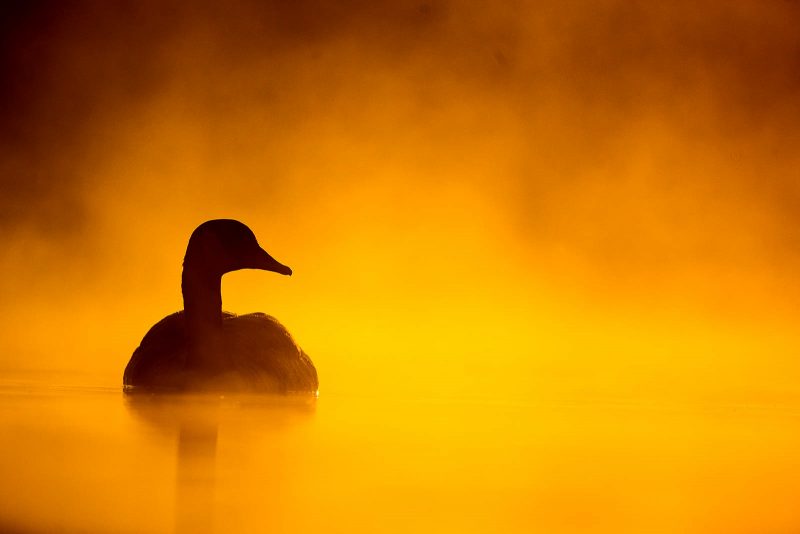 When I first started photography many years ago, I worked almost exclusively with the resident Canada geese on my local pond. This is how I learned to use light creatively.

Working with accessible species such as geese or mallards, for example, allows you to experiment as there is no stalking or waiting in a hide for hours. These birds can be found on nearly all ponds and lakes across the UK, making opportunities relatively endless. Plus, you are free to manoeuvre and use the light to your advantage.

Photography is never just about the subject, but the light. Below I will discuss a couple of the techniques you can use to master the use of light. 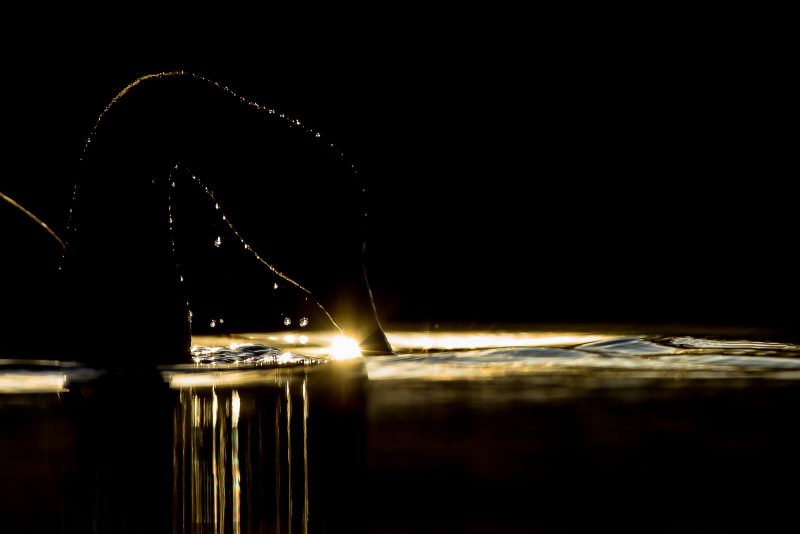 Backlighting is my go-to style of photography. In simple terms, backlighting can be explained as when the sun is in front of you,  lighting the back of your subject. Backlighting is a tricky style to master but, if done correctly, can often create a dramatic feel to your imagery and a final result packed full of atmosphere.

In theory, backlighting can be tried at any time of the day, but shooting into the midday sun means the light is coming from a high angle which will not create the effect we are after. Shooting earlier, or later, in the day when the sun is close to the horizon is the optimal time. This time of day is also known as the golden hour and will create beautiful light with low contrast levels perfect for backlighting. 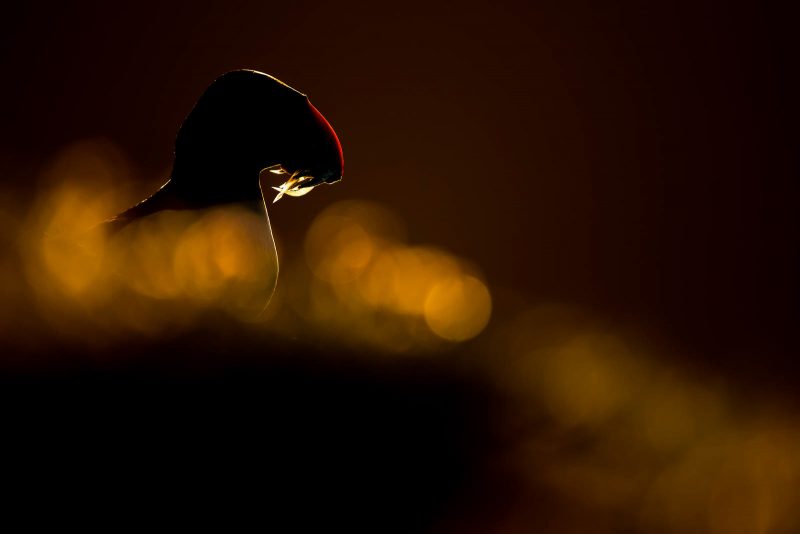 For me, one of the greatest draws to this style is the emphasis on shapes rather than detail. My preference is often to shoot dark and moody; when shooting this way you want distinctive shapes that make your subject easily recognisable to the viewer, such as a puffin’s beak or a squirrel’s tail.

In order to achieve this, first explore your surroundings. Shooting into the light towards a dark background is ideal. This could be a distant cliff-face or woodland which has fallen into shadow. Then, you will need to dial in some negative exposure compensation. Try starting with -2 and adjust until only the rim lighting is visible. The end result will be a clean, visual image outlining the shape of your subject and stripping the imagery back to its simplest form. 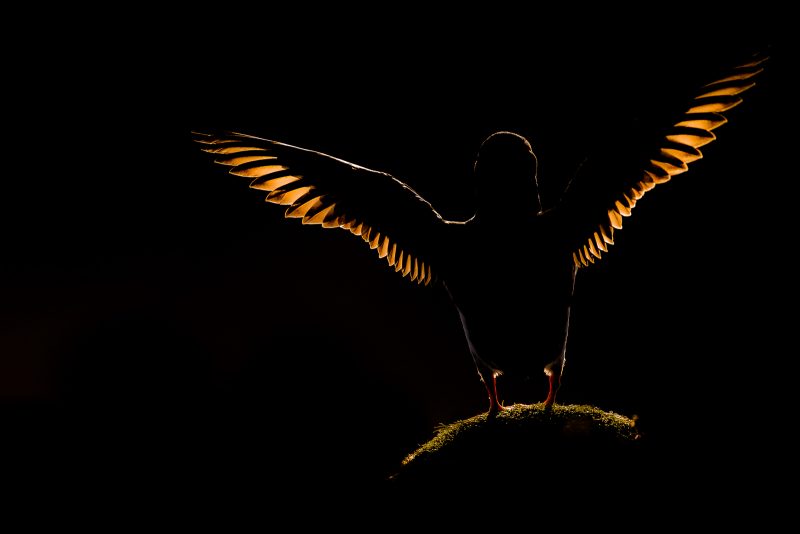 Shooting backlit is open to your own creative freedom, depending on how you want the final image to look. You can either shoot dark and dramatic, or light the subject instead.

The latter option will, in turn, cause the rim-lighting around the subject to blow out a little. Just be careful not to blow the highlight too much. Keeping an eye on your histogram is the best way to prevent this. Birds can look fantastic using this approach as the light shining through their feathers looks almost translucent. 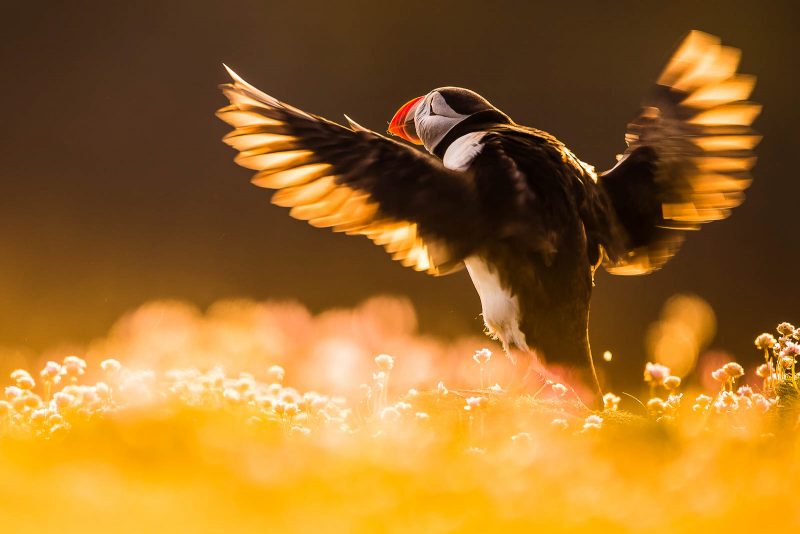 Lenses with a wide aperture (low f-number) can really help to accentuate the bokeh when working with backlighting. This image of a mountain hare was taken using a Canon 500mm f/4 prime lens wide open.

Many photographers flock to the Scottish Highlands each winter in pursuit of mountain hares, hoping to capture images of this hardy animal in their snow-covered world. The winter of 2019 saw very little snowfall in the Highlands. So, a Plan B was needed.

I had been up on the hill during a pretty miserable and wet day, but the forecast was for it to clear up in time for sunset. I decided to stick it out, but little did I know that the showers were a blessing. 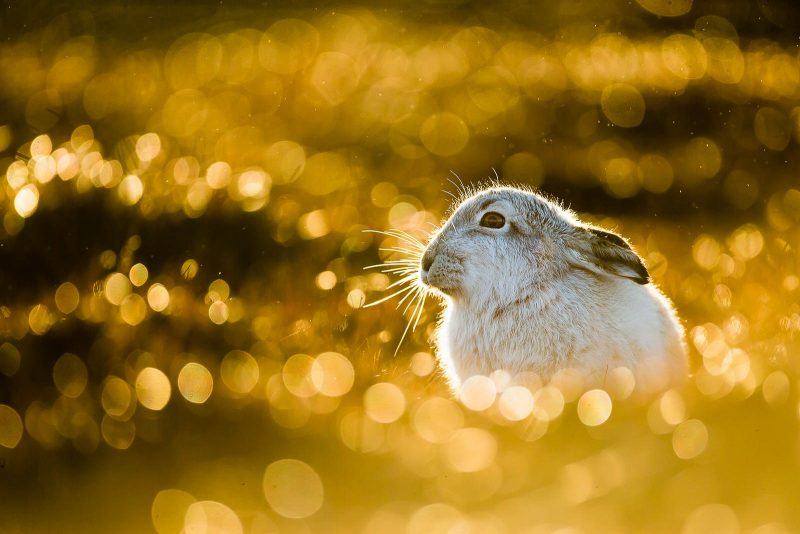 As the clouds broke near the horizon and golden light filtered through, the rays of light hit the heather creating a twinkling I hadn’t seen before. The raindrops sitting on the heather had lit up, creating a perfect bokeh.

Read more: How to Create a Beautiful Bokeh

Thankfully, my favourite hare was relaxing in his regular form. By getting as low as possible to shoot through the heather, I was able to frame the hare against this stunning bokeh.

You will see that the highlights around the hare are a little blown out, but this will happen when exposing for the subject in a backlit situation. Keep an eye on your histogram to control these highlights and stop them being completely blown.

The one drawback of this style is lens flare caused by shooting directly into the sun. Whilst a lens hood will no doubt help, you will need to position yourself slightly off-centre to eliminate the flare from your images. 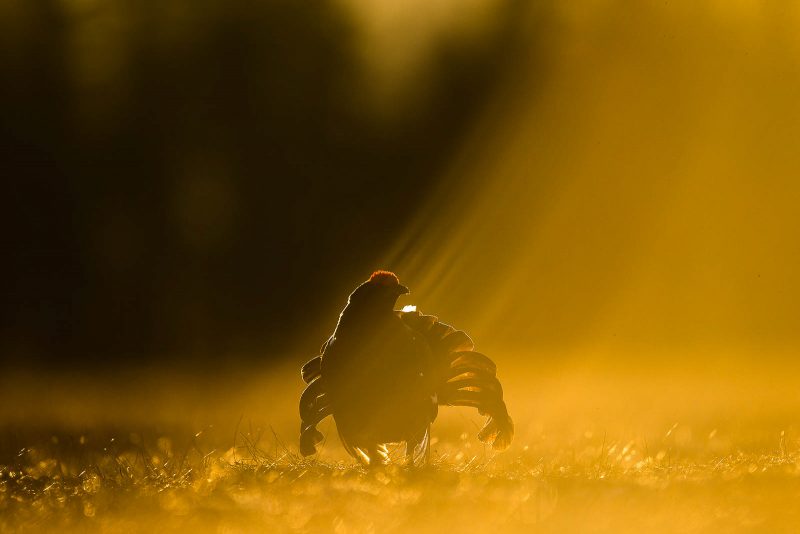 The rulebooks will tell you lens flare is bad but if you are stuck in a fixed position, like I was for this black grouse image, embrace the flare and use it creatively to enhance the image. There may be many of you who don’t like the flare in this image, but that is the beauty of photography: shoot creatively and shoot what you like – you will never please everyone.

4. Working with light and shadows

Playing with light and shadows can be an effective way to transform a scene, creating dramatic silhouettes and images full of darkness and mystery.

Silhouettes are simple to create. The light source needs to be directly behind your subject, and you should expose for the brightest part of the image. Typically this will be your background, causing your subject to be underexposed and therefore a silhouette.

Any subject can be made into a silhouette, but to create a strong image you need an instantly recognizable subject such as a red deer stag.

Puffins are a species that have had the photographic bar raised more than any other UK subject, simply due to the number of times they have been photographed.

Whilst spending 2 months camping on the awesome Shetland Isles last summer, I was trying to create new and unique imagery of these amazing birds. On a particular evening it was cloudy, and I noticed small pockets of light shining through the clouds and hitting the water behind the puffin colonies. 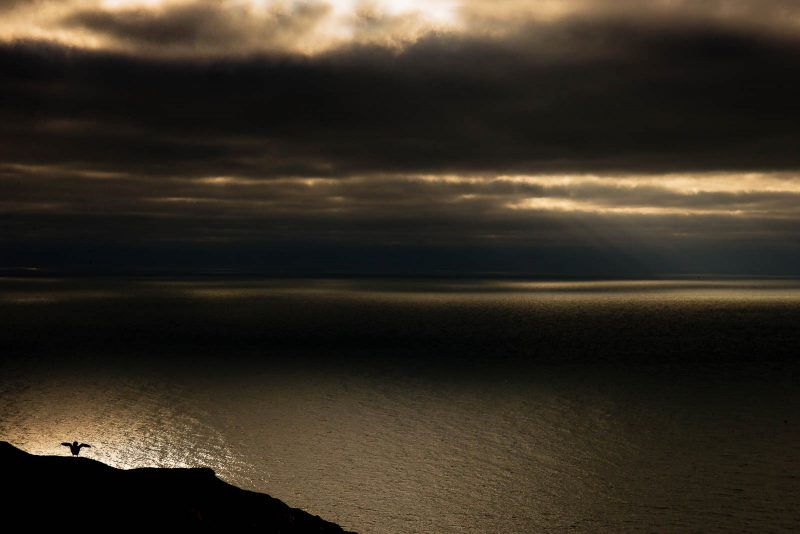 I thought that this would create a perfect silhouette. So, rather than grabbing the long 500mm and excluding this epic landscape, I decided to switch to the wider angle. My lens of choice was the Canon 24-70mm, allowing me to incorporate the puffin into the landscape.

Read more: How to Photograph Animals in Their Habitat

To achieve this image, the first job was to find a puffin on the clifftops, then line it up with the pools of light behind. It was then simply a case of exposing for the brightest part of the image, which was the light patches bursting through. By exposing for this pocket of light and dialling in -2 exposure compensation, I was able to throw the subject and its surroundings into darkness.

The following image uses a similar technique. As the sun was setting, it was casting rays of light onto the water below. Again, I followed a similar process of lining the puffin up against the rays of light and exposing for the brightest part of the image.

For an image like this to work, you need to set an f-stop of around f/9 or f/10; this will allow the light to be rendered as balls of light in the background. If you set the image to something like f/4, you would get a clean and smooth background. Consequently, the image would not work as a creative piece. 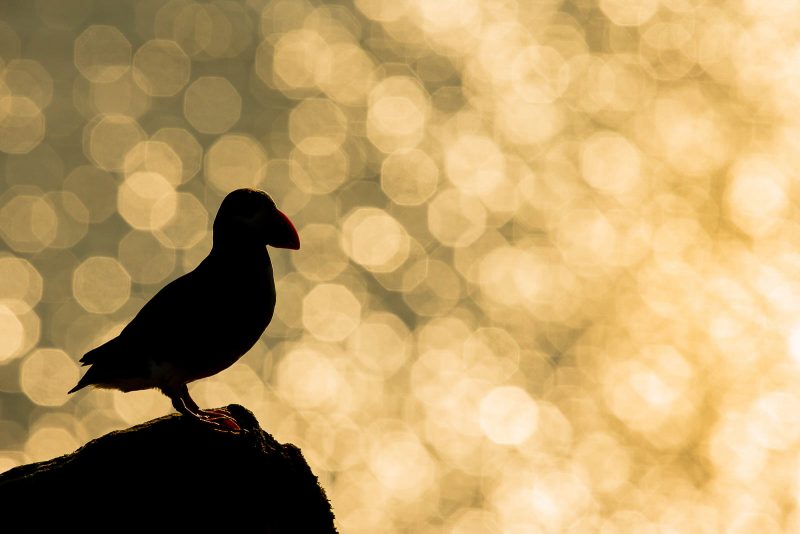 I really recommend heading down to your local pond as much as possible. Practise on easily accessible subjects, such as geese or mallards, and experiment with the light.

These techniques learned locally will stand you in good stead for future shoots abroad or in the UK. Watch the light and learn how to use it to your advantage.

Using light creatively in wildlife photography is not always about waiting for the golden hour; there is always a way to make the best of whatever lighting conditions you are given.

Hopefully, these tips have inspired you to get out, embrace the light, and shoot creatively.