How to Photograph Underwater Fluorescence With Blue Light 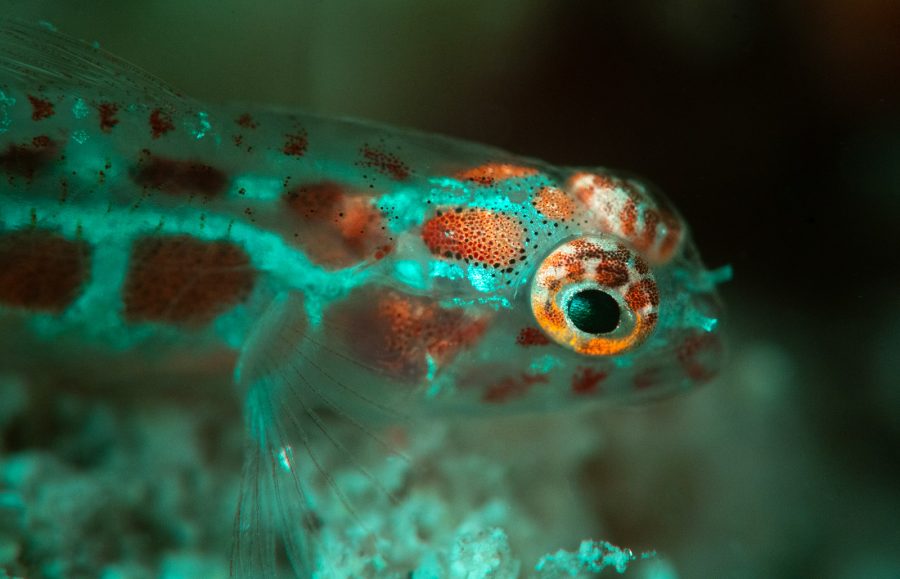 As humans we strive to unravel the mysteries of our world, yet the secrets of the ocean remain vast and deep. One field that continues to intrigue divers and scientists alike is the mystical glowing in our oceans.

Biofluorescence, or fluorescence, is the technical term for this magical glow. It occurs when species absorb blue or ultraviolet light, and then re-emit this light as a different colour. 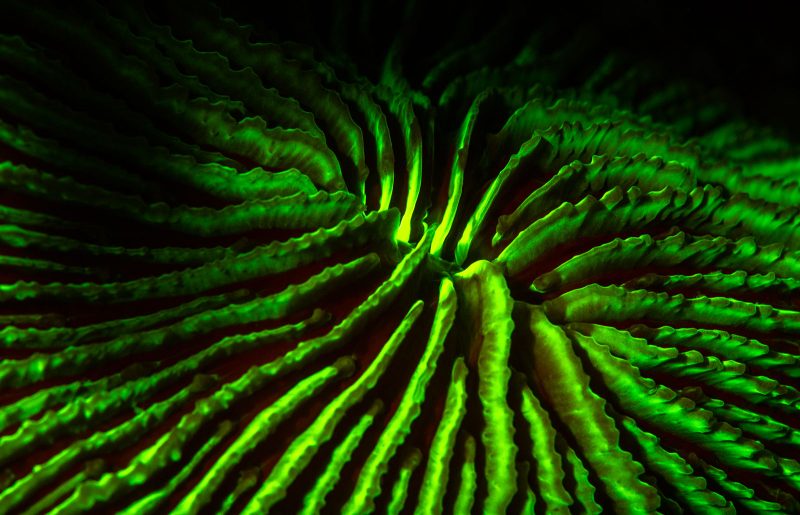 Biofluorescence is a relatively new field of study. A team of scientists at National Geographic captured the first underwater photograph of a fluorescing fish in 2011.

Divers and underwater photographers alike are undoubtedly attracted to fluorescence: as blue torch light floods the reef, it transforms corals into a multi-coloured, glowing phenomenon like nothing else on this planet.

Many dive centres across the world are now offering ultraviolet night diving. Introducing this experience to a dive offers an unforgettable experience, and one that has baffled scientists for decades. It certainly creates a new and exciting avenue for underwater photographers to explore.

Where can you find this phenomenon?

Luckily, you don’t necessarily have to travel far. The ability to see bright, glowing reefs is not restricted by climate. Tropical waters appear to have a higher concentration of these iridescent species, but many temperate and cold-water species also have the ability to glow.

This could be due to a greater popularity in fluorescence diving in tropical locations. It allows species to be discovered as fluorescent more regularly, compared to temperate waters where, in general, diving is a less common activity. 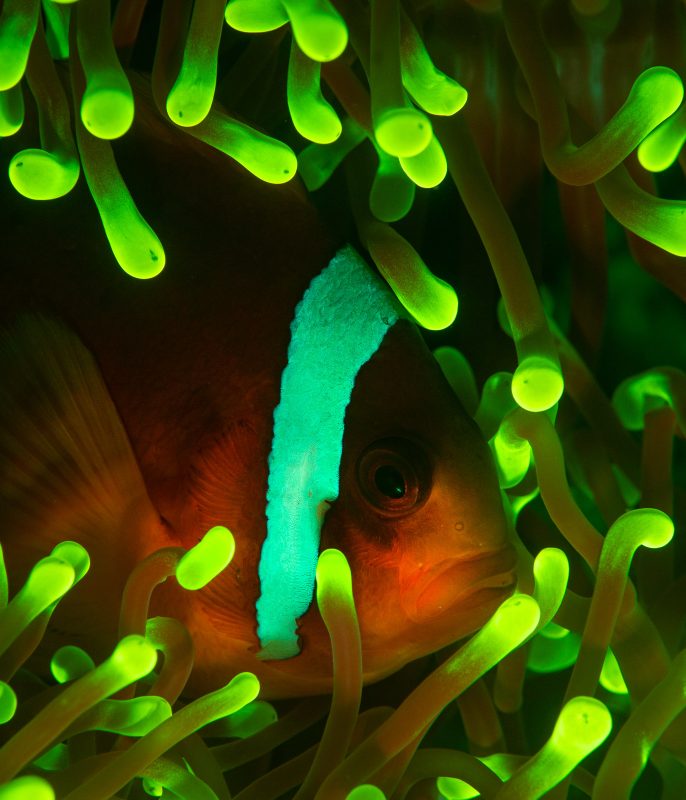 Anemones, corals, gobies, and pipefish are families which have multiple species that we know fluoresce. In the UK, most anemone species fluoresce. Snakelock anemones are a great subject, as they produce a bright green glow.

In more tropical climates, brain corals produce stunning fluorescent images, especially if you get up close with a macro lens.

These are the easiest species to search for when trying to find or photograph fluorescence underwater. But don’t be afraid to experiment with other marine life: it is a relatively unexplored field, so there is always the exciting potential to discover new fluorescent species.

It is still relatively unknown if fish and marine life can see blue light. From my own experience, some seem to be aware of it and others are completely oblivious, as if they couldn’t see it.

I’d stick to the general rule that, if a species is visibly agitated when you take a photograph, it isn’t something you should be continually firing your strobes at. A constant light source is better for the marine life, but can be more costly. 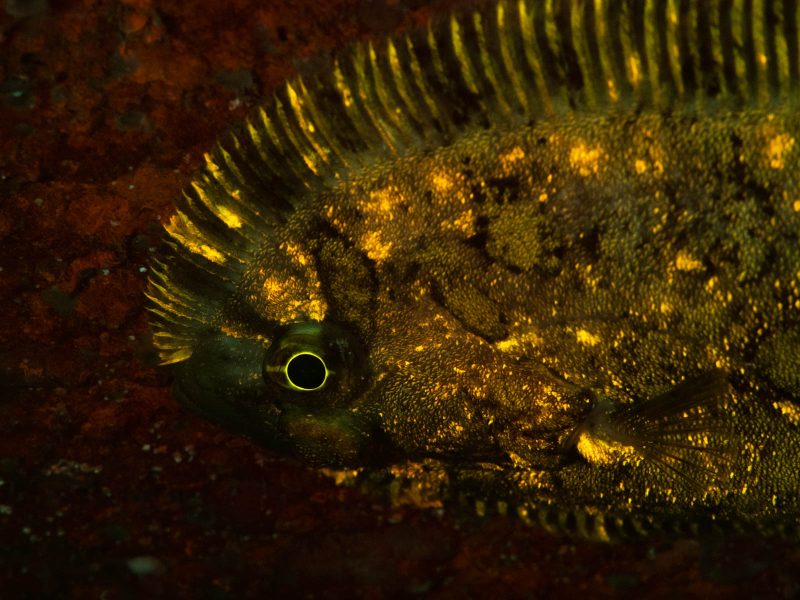 Rockpools are a great place to start when looking for fluorescent marine species. In the UK, you can find gem anemones which have a yellow and green fluorescence, many seaweeds and algae species that have an orange or red glow, and hermit crabs that have beautiful green fluorescence around their eyes.

The use of blue or ultraviolet torches has become popular amongst scuba divers and the underwater photography community. Both blue and ultraviolet light excite the fluorescent molecules within organisms, creating an eerie, magical glow and making for an unforgettable experience.

However, in order to see, photograph, or film biofluorescence, we need to use a powerful blue or ultraviolet light source. This can be achieved in a few ways: by using a hand-held torch, video light, or filters over strobes.

To counter the blue light, a yellow barrier filter is also needed over the lens of the camera, which will block the excess blue light and show only the fluorescence. 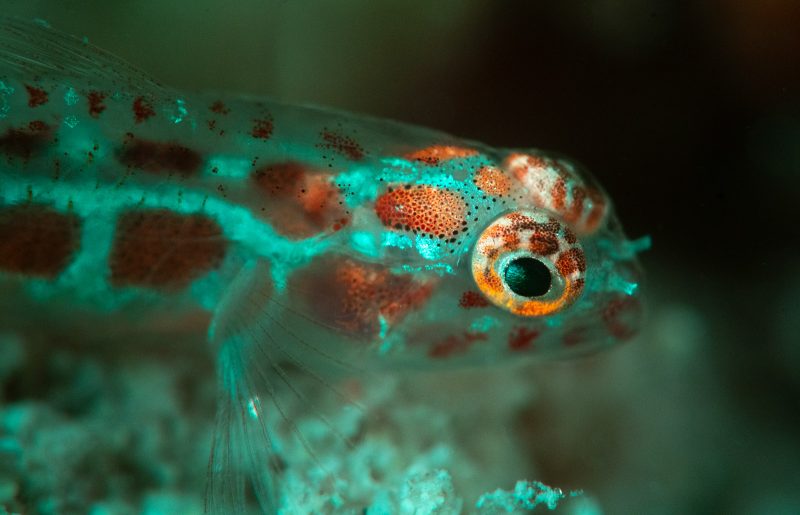 I personally use Glowdive filters. They have a blue filter which goes over your strobe, and a yellow filter which screws into the outside of a macro port. Brands such as Nightsea, Weefine, and Light & Motion all produce specific torches and video lights for underwater fluorescence photography and video.

A general rule when photographing fluorescence underwater is that the more powerful the light source, the brighter the fluorescence it will produce. So, if you are struggling to get the effects and results you desire with your equipment, it may be worth upgrading, or adding an extra light source.

Read more: What Equipment Do You Need for Underwater Photography?

A common misconception is that biofluorescence is only visible at night. In reality it is possible to see it during the day, once you have your eyes tuned into it.

Admittedly, it’s much easier to find the species at night as the glow will be stronger, and it will be easier to achieve the classic image of a fluorescing species on a black background. However, it isn’t always practical to photograph fluorescent species exclusively at night.

Fluorescent species absorb both blue and ultraviolet light from sunlight but, during the day, white light from the sun masks the fluorescence which is produced by the organisms. It is still visible, but considerably harder for us to see.

During night dives we use artificial blue light to excite fluorescence. If we were to then shine a regular torch containing white light over the blue light, it would mask the fluorescence- just as the sunlight does during the day.

Read more: How to Achieve a Black Background in your Underwater Photography

Through our cameras, we are able to isolate fluorescence by manually altering settings and removing the excess white light. Photographing fluorescence is similar to when we use our settings to create a black background: a fast shutter speed to stop excess light entering the camera, combined with a wide aperture to let in as much of the fluorescent light as possible.

There can be a lot of trial and error, as you try to find the sweet spot where you can see the fluorescence without too much distracting ambient light in the background, so have patience! It is much harder to see and find fluorescence in daylight, but it does have a faint glow. I often carry an extra blue torch to enable me to find subjects. 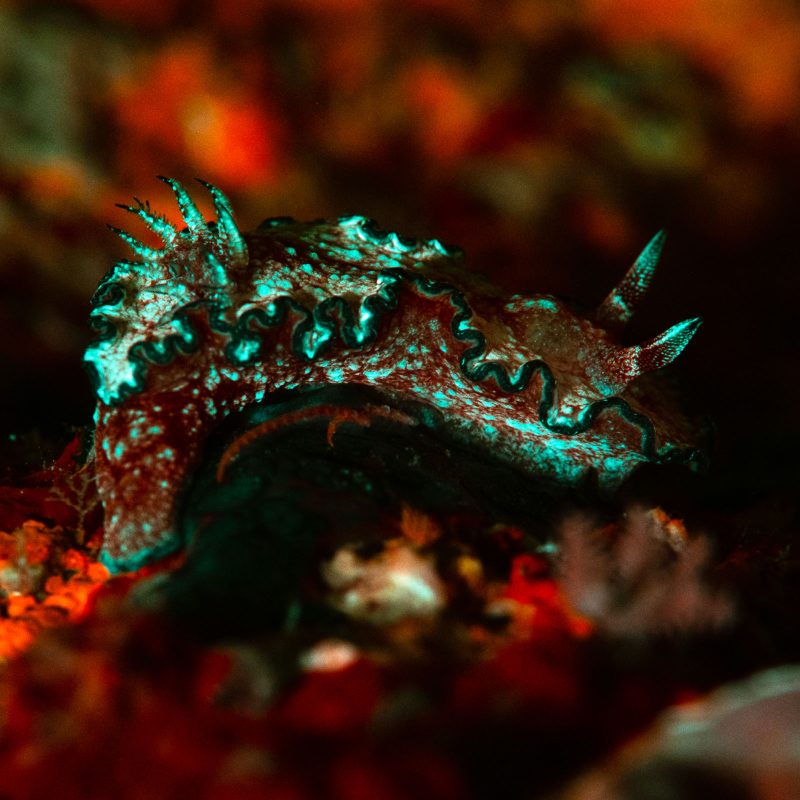 Much like photography with white light, the trick lies in the image exposure. The aim is to find a balance between the bright fluorescence and a non-fluorescent background. The ISO works in the same way when using blue light – it is there to control the overall exposure of the image.

However, the shutter speed and aperture have a much greater impact when photographing with blue light. It’s all about allowing the camera to capture the glowing fluorescence, whilst minimising the amount of excess light in the background.

Sand can be a particularly difficult background when using blue light, as it reflects the light, causing an unusual glow behind the subject. In this situation, I would consider using a snoot to control the placement of light, and only illuminate the subject itself. A wide aperture will allow the camera to capture as much fluorescence as possible, and can help blur a messy background.

Shutter speeds between 1/100th and 1/250th of a second are favourable. This means our subject will be sharp and in focus, and it also helps to reduce the amount of ambient light behind the subject. Experiment with these settings to start with: they will produce an image showing fluorescence, but the glow can be weak.

Read more: A Shot in the Dark – 7 Underwater Photography Tips for Fluorescent Coral

It is important that we alter our settings to allow as much light as possible into the camera. When it comes to post-production, the images often look dull and lack contrast, and sometimes the white balance is slightly strange due to the blue light. However, this is nothing a few minutes of editing can’t solve. 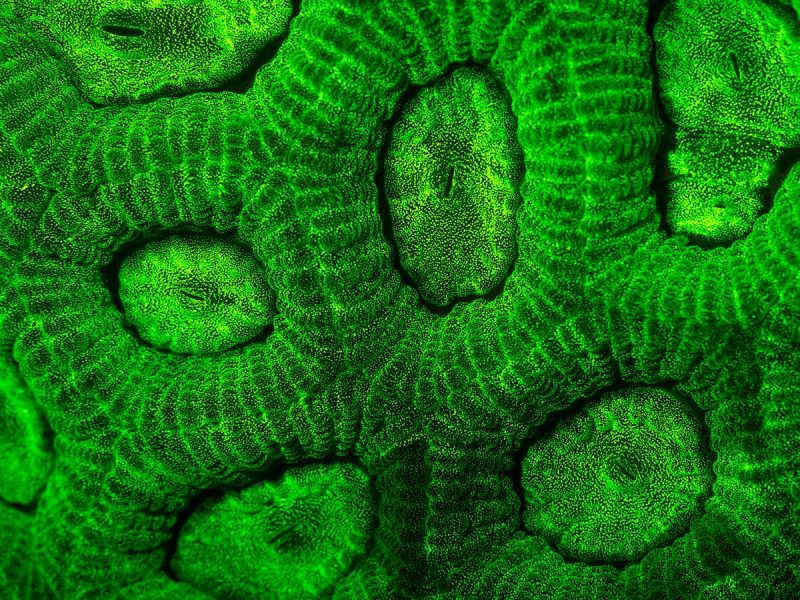 For this reason, it is best to shoot in RAW. This will provide you with the chance to increase the vibrancy or saturation, correct colours, and make your images pop. The most common things you will need to alter in post-production will be the contrast and vibrancy.

Fluorescence photography is inherently weird and wonderful, which means you can be creative with your editing!

Personally, I like to increase the saturation and vibrancy to show a true to life image of the brightness of the fluorescence, as the camera usually produces a duller RAW file, which doesn’t hold the same appeal. If you have any ambient light in the background, it can have a yellow or green hue due to the yellow barrier filter over the lens. A correction of white balance across the whole image should solve this problem. 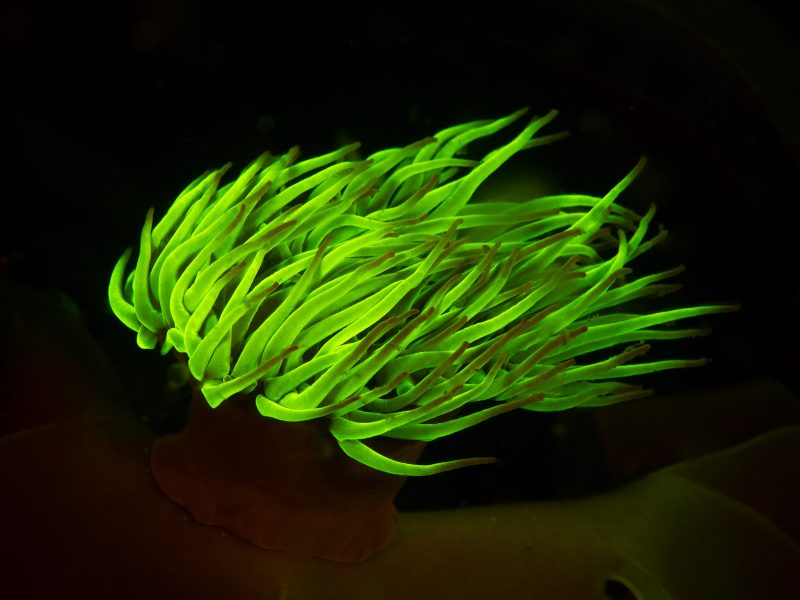 Finally, if the background is messy and detracts from the overall image, darkening the shadows and blacks within it will help to remove the distraction.

Fluorescence photography is a technique that often appeals to photographers who are looking to experiment with new styles, and I’d absolutely recommend giving it a go. It may require extra investment in equipment, but it allows you to explore the ocean in a completely different way, creating a portal to an alien world where creatures glow brightly.

There is even the potential to discover new species as biofluorescent! Despite night diving being the obvious way to see fluorescence, it is also possible to photograph it during daylight. This means that, wherever and whenever you’re diving, you can always be on the lookout for possible fluorescent images.

Ultimately, remember that this technique is naturally visually striking: there is nothing else like it in this world. You will undoubtedly walk away with a unique and eye-catching image that highlights and celebrates the weird and wonderful found in the underwater world!