Black and White Landscapes of the Faroe Islands 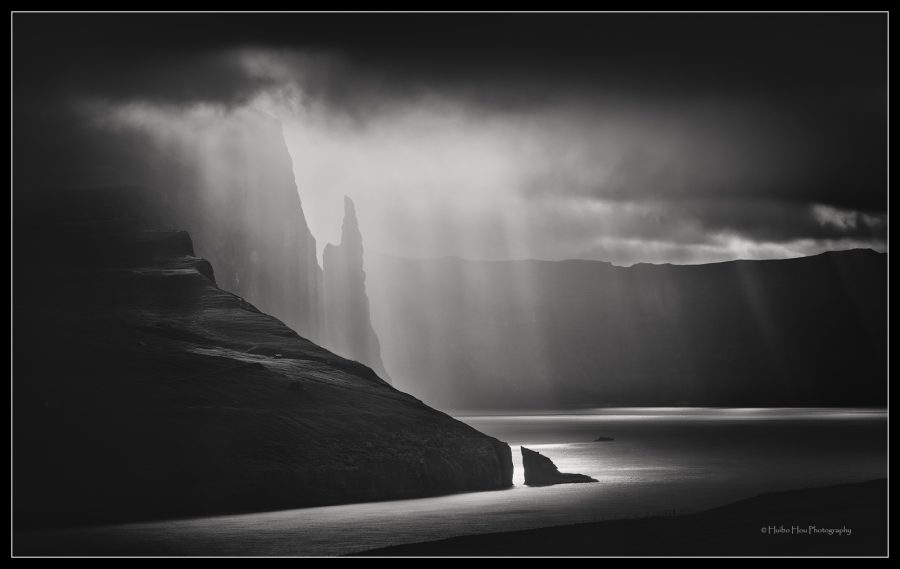 The Faroe Islands are an archipelago of 18 mountainous islands located halfway between Iceland and Scotland in the North Atlantic Ocean.

The islands form a territory, which has been a self-governing nation under the external sovereignty of the Kingdom of Denmark since 1948.

The terrain of the Faroe Islands is rugged, and its sub-polar oceanic climate is windy, wet, cloudy, and cool, making the landscape incredibly dramatic and moody.

This interesting terrain was my main reason for wanting to visit the islands.

After a couple of years of yearning to visit, in July 2019 I was finally able to go with several friends – most of whom are from my local photographers’ group.

The islands did not disappoint. 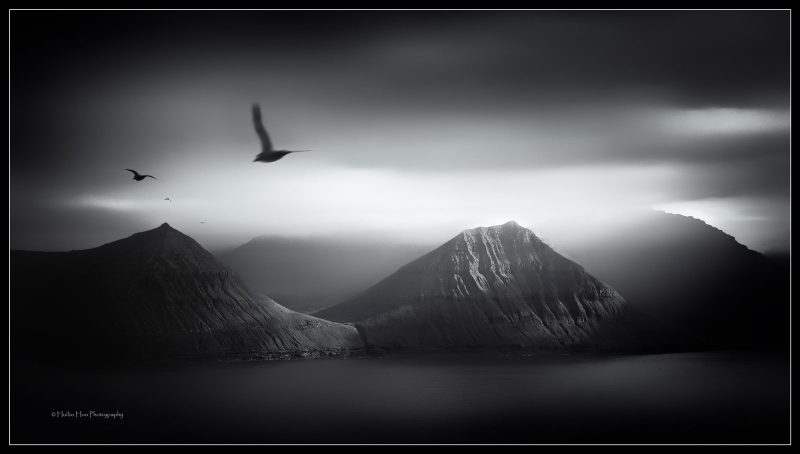 During my stay, I was constantly in awe of the islands’ otherworldly and solemn atmosphere. The mountains are rugged, the sea stacks are mythical, the clouds are constant and dramatic, and the fog rolls in often.

The power of silence and vastness coming from raw nature is so strong that it is almost intimidating. The islands command respect from their visitors.

This was our first visit to the Faroes, and my friends and I were quite excited. Each of us contributed to the planning: where to sightsee, where to stay, what to photograph, etc. 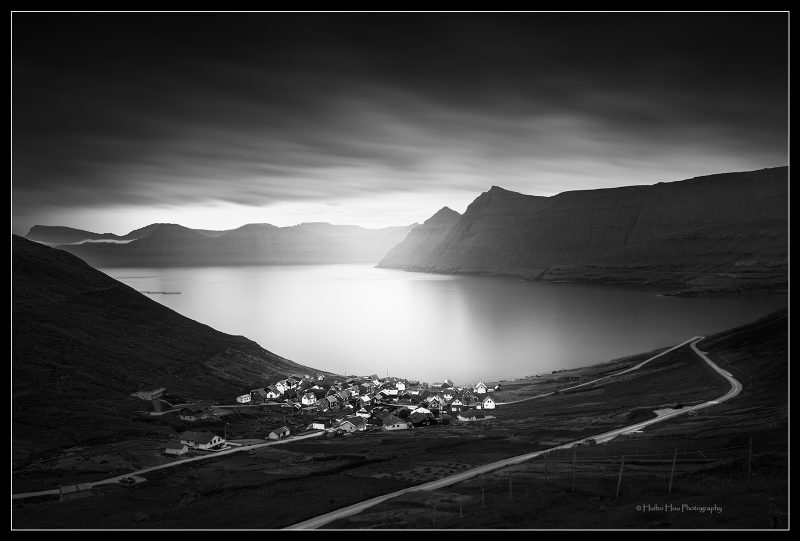 The famous rock named Trøllkonufingur (meaning witch’s finger), a 313m tall monolith on the island of Vágar, was on our list to photograph.

According to legends, Trøllkonufingur is the finger of a witch that came to throw the Faroe Islands to Iceland. When she came to the sea south of Vágar, the sun came up and she was turned to stone and fell into the ocean.

However, she was so big that when she reached the bottom of the sea, the back of her head (the island of Koltur) and her finger (Trøllkonufingur) were above the surface.

There are multiple angles from which to photograph this famous rock. This photo (below) was shot from a distance near the trailhead to Lake Leitisvatn.

With the help of the photo app Planit Pro, we kept coming back to check out a couple of promising locations, and the third time was the charm.

It started as a very cloudy morning when we were out photographing the rock from a lower elevation.

Then, as the sun began revealing itself from the thick clouds, we rushed towards a slightly higher elevation for a better, unobstructed view of the rock.

The sun was constantly trying to break through the cloudy haze, casting down a multitude of gorgeous, continually moving light beams. The light show went on for quite some time and had all of us completely in awe.

The image above shows a wider view of the scene, taken with Canon 5D Mark IV and EF 70-200mm lens at 85mm. During post-processing, I had to crop a lot from the top and bottom.

I then focused on taking much closer compositions by zooming in further. The rest of the images were all taken with the same lens but at about 200mm. 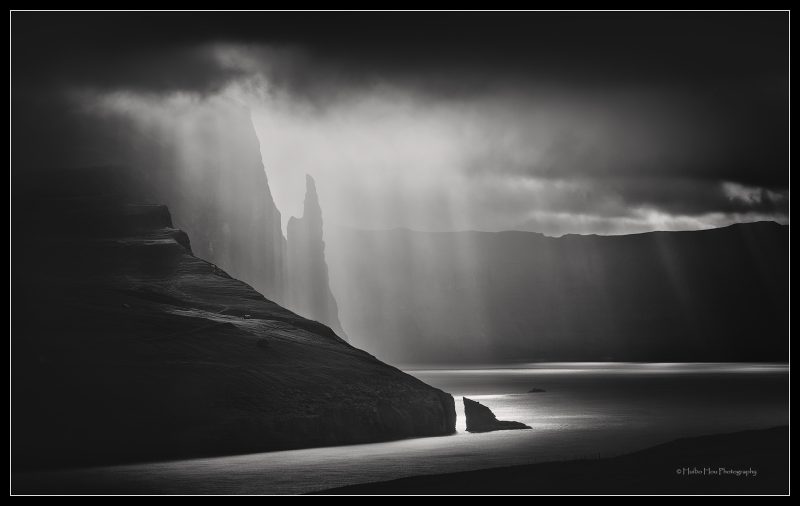 The above image became one of my most popular images. I love it (and many others in the same series) as it truly showcases nature’s raw beauty when everything falls into place.

It’s certainly one of the rarest instances where we showed up at the right time in the right place – although it did take us three tries.

Post-processing in black and white

Many people have asked me about the editing process of the image. The original colour capture is already quite atmospheric, so I knew a black and white would excel for this scene.

Before converting this image from colour to black and white, I had to do some clean-up.

There was a big barn under construction at the very edge of the bay at the time of our visit. Or at least we thought it was going to be a barn since we only saw beams and framing, but the exterior and the roof hadn’t been installed.

When I took the picture, I had to include the top portion of the barn in my shot to keep the overall composition balanced. Then during post-processing, I removed the top part of the unfinished barn from the image.

Another major post-processing step involved the surface of the bay, where there were many small ripples in the water.

I generally do not like too much texture unless it is very important to the overall effect. I, therefore, blurred the water slightly to make it appear calmer.

The rest of the post-processing was all about using black-and-white tonal control to accentuate the lights and atmosphere.

This was not a difficult job for this image (and many in the same series) because the weather god did most of the work already!

While I love the above black-and-white image, and many considered it the best from the series I took that morning, I felt it lacked a personal vision to some degree.

That is, the composition itself was quite straightforward. Anyone who stood next to me would have had a similar composition. This image is nature’s best work but not necessarily my best personal work.

When I reviewed my raw files, I noticed that another image, taken just a few minutes apart, had the potential to better communicate the mood.

At a glance, this image (below) is not as glorious as the above one, but it has a very different, more mystical, and solemn atmosphere.

It is closer to what I felt at the scene, and it is more unique and personal.

For this image, I cropped further to leave only the essential elements in the frame. I also reduced the texture on most parts of the image to accentuate the mystical feeling.

This image won the grand prize of Amateur Monochrome Photographer of the Year 2019 in the Monochrome Awards/International Black & White Contest. I’m glad my personal work resonated with the judges. 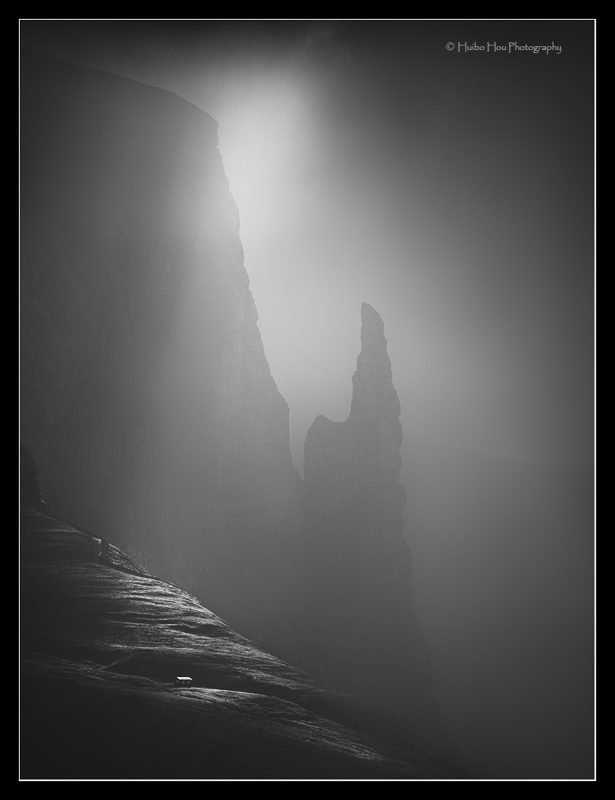 Above is another approach to cropping the same image. In this version, the right side is cropped out to let viewers focus on the tiny barn (with the roof lit) on the slope.

Conveying emotions and mood in monochrome

One of the reasons I often choose black and white for my landscape photography is that I find, in certain cases, black and white allows me to better express and communicate strong emotions and moods.

For certain subjects, content, compositions, lighting conditions, etc., black and white seems to touch me more profoundly, without the distraction of colour.

I hope my viewers feel that too.

With strong or creative compositions, as well as effective tonal control, I can guide viewers to focus and engage with the visual space I observed, extracted, composed, and processed.

When capturing an image in the field and doing post-processing work at home, I’d usually ask myself: what moved me at the scene? What was my instinctive reaction? Can I identify and describe it? How am I going to effectively communicate that?

To me, a compelling image almost always starts with identifying something that one feels specifically connected with.

Finding that connection and then figuring out the most effective way to communicate that through our images is crucial to personal expressive work.