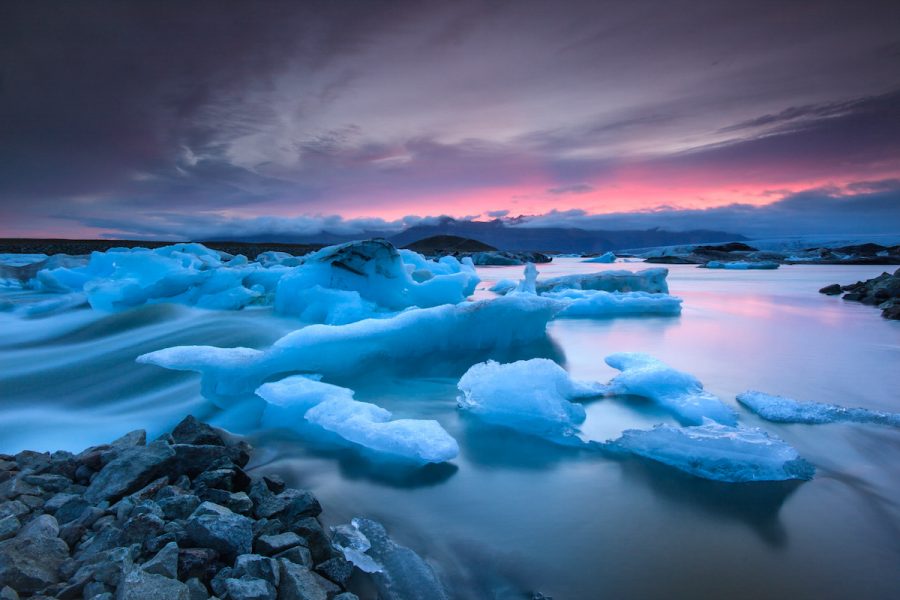 Nicknamed the land of fire and ice, Iceland is wealthy with geological anomalies and striking landscapes making it a photographer’s paradise full of highlights. This article looks at the best places for landscape photography in Iceland.

Resting at the edge of the Arctic Circle, Iceland promises thrill-seeking adventures, dramatic landscapes and an abundance of highlights, waiting to be explored (and photographed). Measuring 103,000 sq. km (40,000 sq. miles), bigger than Hungary and Portugal and a little bit smaller than Cuba, Iceland is divided into 8 regions, each with their own must-visit highlights.

Active volcanoes, bright green valleys, glacier-cut fjords, black sand beaches, and powerful waterfalls are the most distinctive features of the Icelandic landscape, ripe with exploration. Even its name piques curiosity, as ice only covers about 10% of the land, but still represents the largest glaciers left in Europe. With its stark contrasts and natural blend of the four basic elements – earth, air, fire, and water – Iceland promises impressive landscapes, making for striking photographs. 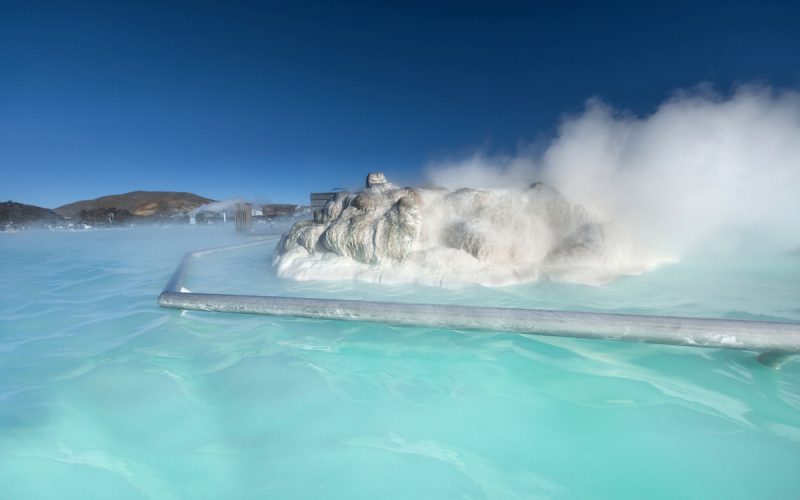 Less than an hour away from Reykjavík lies the famous blue lagoon, a geothermal spa in the middle of a lava field. One of the 25 wonders of the world, these crystal blue pools are full of mineral-rich water with high natural levels of mineral salts, silica, algae, the reason behind the lagoon’s picturesque blue. For the best photographic opportunities, wander outside on a path to get shots of the blue water against the green moss covered lava. Don’t miss out on its relaxing and rejuvenating qualities – go in for a dip!

Located in the Southern Peninsula region of the island, the lava field lies 27 meters above sea level and guarantees amazing landscape photo shoots of the expansive black volcanic terrain. Good landscape photography is mainly driven by the creative angles within the landscape, yet can also be affected by the camera being used.

After Iceland’s oldest lighthouse was demolished due to numerous damages from earthquakes and rough sea in 1907, the new lighthouse was reconstructed, measuring 31 meters. Situated above a rocky hillside, the white structure with its red lamp makes for impressive photos as it shines its powerful beam, especially on a cloudy day.

Located in the southwest part of the Reykjanes peninsula, Gunnuhver is a highly activated geothermal area of mud pools and steam vents. Collectively named after an angry female ghost, the hot springs’ eerie atmosphere is quite picturesque, capturing the steamy sky below the boiling sulfuric mud pools. The colorful minerals cooking in dangerous temperatures of over 300°C (570°F) in the ground create vibrant hues. The steam vents’ grandiose vapor clouds can be captured at various different angles yet be cautious with your step and stay within the designated trails. 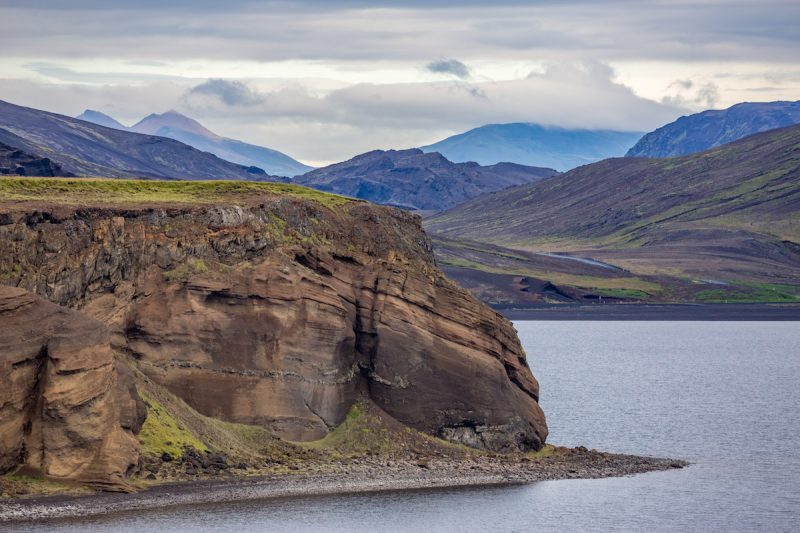 After a scenic and bumpy drive across lava fields spotted with steaming volcanic vents and boiling hot springs you will reach the Krísuvík Cliffs. Home to thousands of sea birds coming to mate, the birds nestle themselves within the cliffs beside the crashing Atlantic surf. This is a prime location for animal photography within your landscapes. Just a quick hike along the edge of the cliff and you will be able to spot a vast number of species depending on the season, including guillemots, auks, puffins, seagulls, European shags, sandpipers and peewits.

The largest lake in the peninsula, it is situated on the fissure zone of the Mid-Atlantic Ridge and is 97 meters (318 feet) deep. In order to capture the dramatic landscape between the volcanic surroundings and placid lake, a comfortable trail is accessible throughout the lake, reaching a picturesque fishing lodge. 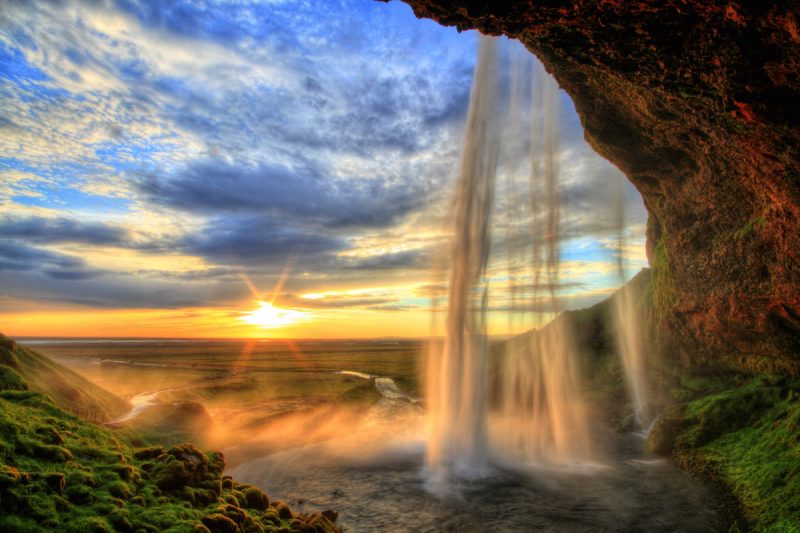 Fed by the melting water from the famed glacier-capped Eyjafjallajokull volcano, this majestic waterfall gracefully plummets 63 meters into the Seljalands River. You could spend hours hiking around the waterfall and photographing the sparkling white falls, surrounded by the emerald meadows. The most iconic photographs can be taken behind the curtain of the water, through a waking path in order to enjoy a truly unique viewpoint. It is the only known waterfall in the world that it is possible to walk behind. During the winter it is not permitted to walk behind the waterfall, however during the spring visitors will witness many different wildflowers blooming around the waterfall. 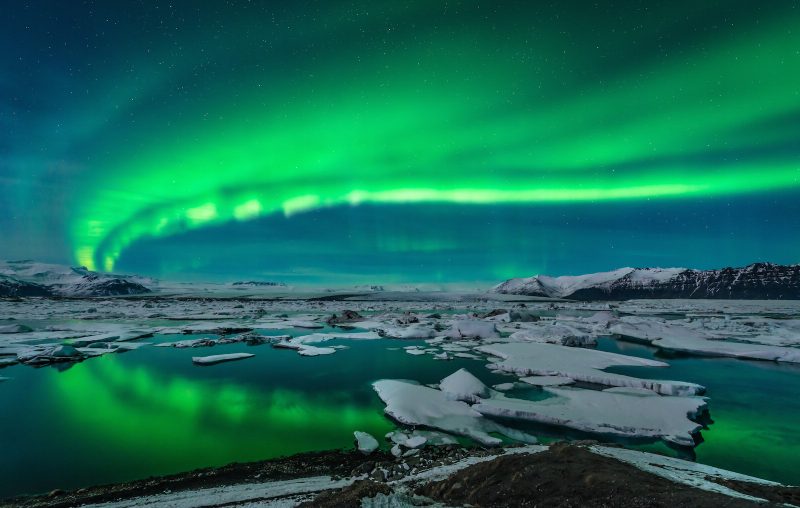 Astronomically known as Aurora Borealis, are dancing lights formed when electronically charged particles from the sun collide with atoms and particles within the earth’s atmosphere. They commonly produce bright green and yellow-green color, and are mostly visible on clear, dark nights and away from cities. Photographing this natural phenomenon is not easy and having Northern Lights photography expert, photographer Tyron Turner, as a guide is highly recommended. 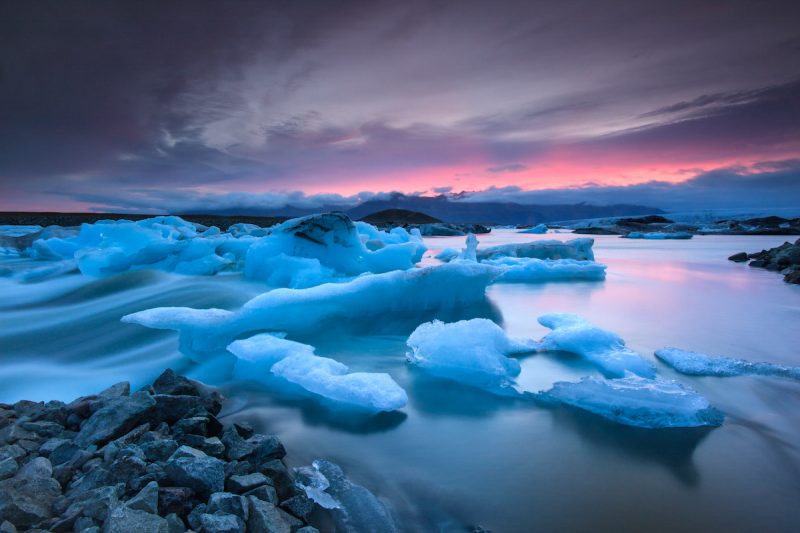 Said to be one of the greatest wonders of nature in Iceland, it is quite recent, as a result of the climate’s increasing temperatures. Located next to Vatnajökull, Europe’s largest glacier, the lagoon is characterized by ice, glacier tongues, rugged highlands and lava fields. As the glacier Breiðamerkurjökull adjusts to rising temps, ice chunks continually break off and float into a lagoon of melted ice. Each visit is unique as the lagoon is formed naturally and every year continues to get larger. A boat trip in the lagoon will allow you to get up-close photographs of the impressive glaciers, reflected on the crystal blue water.

On the seashore of the black volcanic beach ice-chunks polished by the ocean lay stranded, resembling diamonds, earning its nickname, Diamond Beach. The icy, blue landscape guarantees striking photographs, and at night the Northeastern Lights can be photographed reflected on the crystal surface of the lagoon. The night sky will welcome impressive star trails to be photographed, yet may be hard to capture with sharp stars (so read our tutorial before you go!). 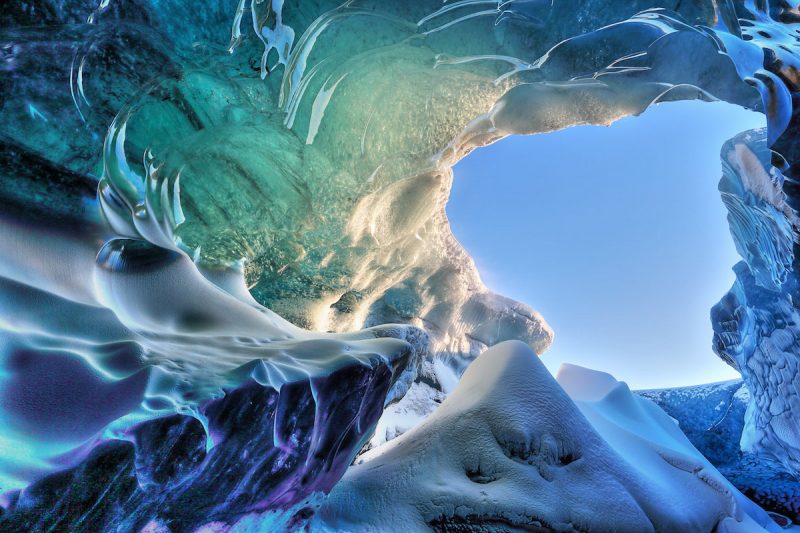 The glacial tongue extending from southern Vatnajökull provides the lagoon with all of its icebergs, and due to its constant retreating and breaking, produces enormous cracks and cervices. Through these rifts a natural cave has appeared on the iceberg, first discovered in 2005. The photographic opportunities inside the cave are endless, shooting the glossy surfaces and blue reflection, best shot using a wide-angle lens.

This once small fishing village has grown in to today’s town as a result of the development of a relatively diverse fishing industry and high tourism attracted by the Vatnajökull National Park. Signifying harbor, Höfn sits by the Hornafjörður fljord and features authentic fishing culture to photograph Iceland’s local culture. 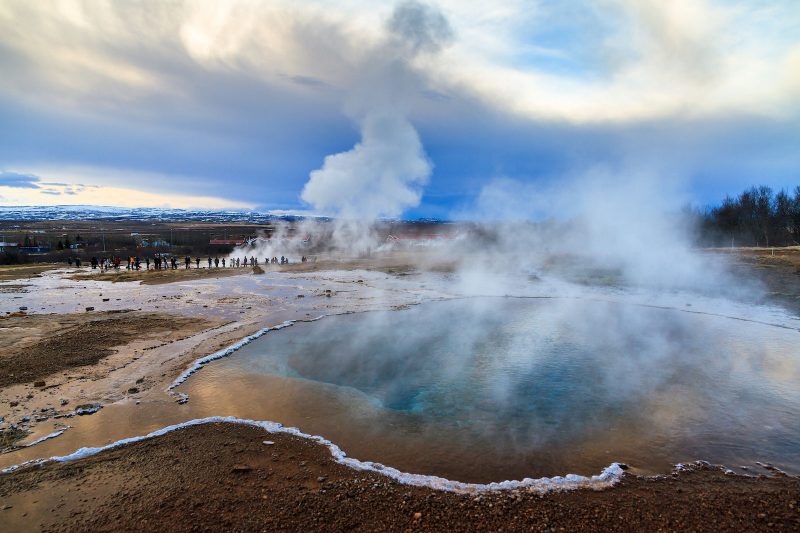 Situated on the Golden Circle, a route consisting of the most popular sightseeing locations, this famous geyser in Haukafalur Valley features spectacular hot springs spouting a vast amount of steam every 10 minutes, around 30 meters into the air, fired up by nature’s hot magma. Similar to Gunnuhver hot springs, the boiling ground and steam vents make for striking photographs, especially with different day lightning.

This iconic waterfall offers a spectacular view of the powerful streams fed by Langjökull glacier, plummeting down 32 meters into two tiers into a canyon. If you are lucky and visit this Golden Circle highlight on a sunny day, you may be able to capture a rainbow shimmering over the waterfalls.

This picturesque village is beautifully situated on the northern side of the of the Snaefellsness peninsula in the western part of Iceland. Within its green meadows and snow-capped mountains, lies the town of about 1100 people, with its authentic wooden houses and Breidafjordur harbor, where the Baldur ferry sails in the Westfjords. This village is a great opportunity to get some street photography in, surrounding the fishing commerce and locals.

With scenery ranging from rocks blanketed by green moss to blackened lava hills, this is a perfect destination to capture Iceland’s stark contrasts. The field was created 3-4,000 years ago from an ancient lava flow, which created two lakes on their southern side to add to the serenity and beauty of the landscape. As with any lava field, it is a tough hike around the perimeter but the photographs will be worth it.

Situated near the proud Mt. Kirkjufell, in Kirkjufellsa River, this powerful five meter high falls divides into three separate spouts, creating several tiers of majesty. Behind the falls stands the pyramid shaped peak of Mt. Kirkjufell, which is particularly scenic to capture the serenity of the water against the dramatic mountaintop as a backdrop. It is worth it to stay until late in order experience the midnight sun, as the sky is painted in vibrant hues of pink, orange, purple, and reflects on the pool below the falls.

One of the most popular highlights of the Snaefellsness peninsula, this photogenic beach is like stepping into a lava wonderland. Throughout the beach huge lava formations stand proudly dominating the landscape, with the Snaefellsjokull volcano towering above. Covered in black pearly pebbles, this beach was once home to one of the peninsula’s largest fishing villages, but is now uninhabited, featuring wreckage of an old rusted shipwreck from 1948. No matter the lighting conditions, this beach’s landscape photography opportunities are endless, as the sun glistens against the water or the clouds ominously blend with the black beach.

Iceland’s highlights are dependent on the months of the year. If you are hoping to capture the Northern Lights, your best bet is November to March, contending with the cold. Crowds are the highest in the summer months due to the warm temperatures and midnight sun.

Iceland brings out the best in each season and what time to visit is completely dependent on your interest of which highlights to capture.

How to Get There

Don’t waste this opportunity: experience a guided workshop tour, with National Geographic Photographer and Iceland enthusiast, Tyrone Turner! A guided photo tour is a great way to make sure that you receive hands-on tutoring and tips on how to capture Iceland’s iconic highlights. Prepare to be inspired and challenged by Iceland’s magnificent landscape photography opportunities.