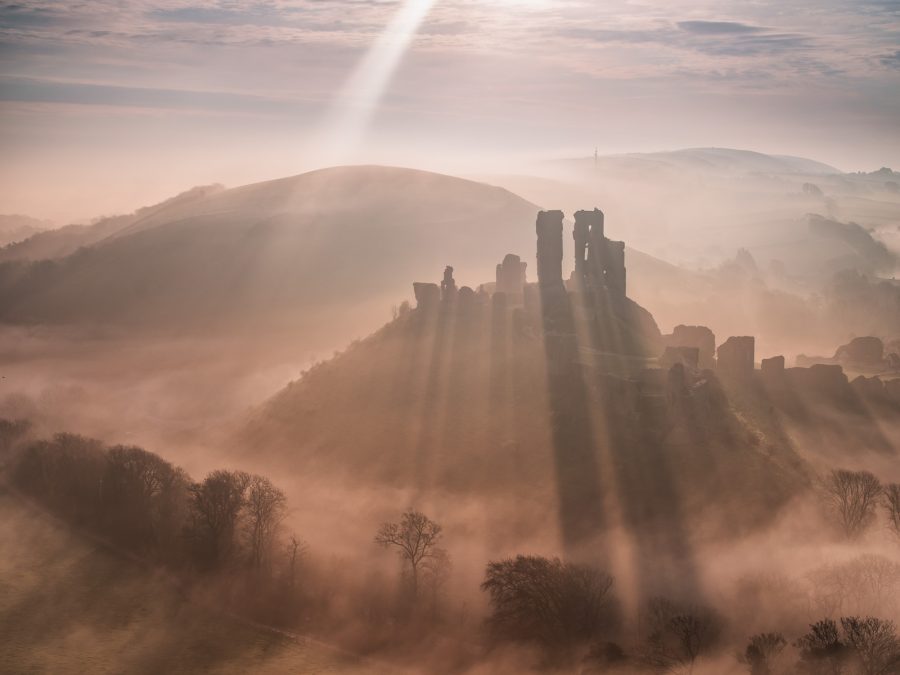 Dorset is not a large county, consisting of just 1024 square miles, but it packs a huge amount of interest into a small area. It is home to some of the UK’s most iconic locations and is world famous for the ‘Jurassic Coast’ – the first wholly natural World Heritage Site to be designated in the United Kingdom – which makes up almost all of the county’s coastline.

Although it is best known amongst photographers for its stunning coastal locations, Dorset offers so much more: rolling hills, serene riverside views, ancient ruins, dramatic moorland and beautiful woods.

Not surprisingly, Dorset is popular with general tourists as well as landscape photographers and, as a result, it can feel a little crowded in the summer months. Visit out of season, however, and you’ll not only avoid the crowds but will also enjoy the added bonus of better light. From autumn through to early spring, the sun rises and sets over the sea, giving an increased chance of colourful sunrises, sunsets and glorious golden hour light on the coast.

Let’s take a look at some of the best landscape photography locations in Dorset.

Located in Purbeck, about 12 miles west of Swanage, Kimmeridge Bay is dominated by Clavell’s Tower. Originally built as a folly and now run as a holiday let, it stands with its commanding position on the cliffs above the shore.

The tower makes a very effective focal point in compositions, but there are plenty of other subjects including rocky ledges, headlands, rock-pools, waterfalls and the remains of an old stone pier.

Kimmeridge is full of fascinating geology and is a favourite haunt of fossil collectors. As you walk around, you will see literally dozens of ammonites embedded in the rocks.

There is no single best viewpoint, with interest all around the bay. As with so many coastal locations, tide height is important – too low and and messy distractions are revealed, too high and much of the interest is covered. A mid-tide is generally preferable, so check the tide tables carefully when planning a shoot. Kimmeridge is an excellent sunset location, especially in the late autumn and winter.

Half-way between Wareham and Swanage, just off the A351, is the romantic ruin of Corfe Castle. Built by William the Conqueror to defend the only gap in the Purbeck hills for 11 miles, it was demolished by the Parliamentarians after they captured it in the Civil War.

For photographers that was a good thing, as it is so much more photogenic as a ruin than it would be if perfectly preserved.

On misty mornings, it rises above the top layer of mist like a scene from a fantasy film. There’s no law that says you have to photograph the castle in these conditions, but they are hard to resist.

Look for cool, clear, and still nights with the humidity getting above 90% an hour or so before sunrise and there’s a reasonable chance of mist. For the classic view of Corfe Castle, climb up neighbouring West Hill and shoot towards the sunrise.

Accessed from Langton Matravers, just west of Swanage, you will find one of Dorset’s hidden gems: Dancing Ledge.

So-called because of the patterns made by the waves as they wash across the flat surface of the rocky ledge, the effort it takes to reach – it’s at the bottom of a very steep hill – means that you will probably have the place to yourself.

To get down to and back up from the shore requires a bit of scrambling and, because of the isolated nature of the location, I’d always recommend making the trip with another photographer.

There is plenty of foreground interest in the ledge itself, including a small tidal swimming pool, which was blasted out of the rock in Victorian times. During the winter months, you can shoot with the sun rising over the sea and in mid-winter good sunsets are also possible.

Mupe Bay is a fairly short but somewhat strenuous walk east from Lulworth Cove. As a result of the effort it takes to get here, and also because it is situated on the army ranges and only open at weekends and holidays, it is a quiet and largely unspoilt location.

It is a rugged cove with craggy ledges and sea stacks, and has a wild, isolated atmosphere. The sea stacks have a menacing appearance and make excellent minimalist studies at high tide – they can be long exposure heaven with waves washing around them.

At low and mid-tides, the ledges are nicely exposed and make excellent lead-in lines through compositions looking eastwards towards nearby Worbarrow Bay. Be aware that the ledges can be very slippery and, given the isolated nature of the location, I’d always recommend going there with a friend rather than alone.

It’s a perfect spot for a winter sunrise, with the sun rising over the sea, but mid-winter sunsets can also deliver excellent light as the ledges will be side-lit by the setting sun.

The famous natural rock arch of Durdle Door needs little introduction, being familiar to many people from school geography lessons. Located on the coast, about 9 miles south east of the county town of Dorchester, it’s a striking sight both from the shoreline and the cliff top, and it photographs equally well from both viewpoints.

The best times to shoot are mid-April and mid-September, when the sun sets in such as position that it lights the face of the arch. Or go in mid-winter, when from the shore you can photograph the sun rising through the arch.

From October, through until early March, you can shoot towards the setting sun as it dips below the horizon over the sea. By using a wide-angle (around 20mm on a full-frame camera), you can compose with the arch on the left of the frame and follow the shoreline towards the sunset.

While you’re here, don’t forget to shoot neighbouring Man o’ War Bay, a beautiful cove which, being situated next to Durdle Door, doesn’t get the attention it deserves.

A couple of miles west of the market town of Kingston Lacy is an avenue of beech trees flanking the B3082. These originally formed the main driveway to the manor house at Kingston Lacy, but now the B3082 is a busy ‘rat run’. However, it is still beautiful and the lines of beech trees stretching into the distance, bisected by the undulating road is a breathtaking sight.

The trick is to photograph it at less busy times so that the road looks more like a quiet country lane.

Alternatively, there are many possible compositions which don’t feature the road; the canopy of branches to the sides also make excellent studies. Interesting shots can be taken at any time of year, but the beech avenue looks especially good in early spring with a canopy of vibrant green leaves, and in the autumn misty mornings can be particularly atmospheric.

Just a few miles away, north of Wimborne Minster and just off the B3078 Cranborne Road, is the hamlet of Knowlton. It is home to an extraordinary ruined Norman church situated inside a Neolithic henge monument.

It has a reputation for being haunted and often features in books and articles about ghosts in Britain. Whether or not you believe such tales, there is certainly no denying that it’s possible to take very atmospheric images here.

Good shots are possible throughout the year, both early and late in the day. It generally looks best when given some context, so pack your wide-angle lens and look for angles which highlight the isolation of the church and surrounding earthworks.

Dramatic lighting will enhance the mood and, as it’s possible to park really close, it’s worth taking a chance and visiting Knowlton on days when the weather is changeable.

The Isle of Portland, connected to the mainland by the shingle spit of Chesil Bank, is located just south of Weymouth; for many people it marks the start of west Dorset.

From Portland Heights, there are far-reaching views along the 17 miles of Chesil Bank, but Portland is probably best known for the classic red and white striped lighthouse at Portland Bill – the southern tip of the isle.

There are viewpoints to the west and the north-east of the lighthouse, so it’s another location which can be successfully shot at different times of day and throughout the seasons.

A few hundred yards to the west of the lighthouse is Pulpit Rock, a rock stack which is the remains of a natural arch which was cut away by quarrymen in the 1870s. The sea can be rough at Portland Bill, which can make for dramatic shots of waves crashing over rocks, but can also present a serious hazard to both yourself and your equipment.

Waves can break over the low cliffs where you shoot from, so keep your distance from the edge and keep away altogether in particularly bad weather.

On the west Dorset coast is a line of golden-coloured sandstone cliffs, which have been eroded by the wind so that their surface has a honeycomb texture. The cliffs stretch from Burton Bradstock to West Bay and were made famous in the TV series ‘Broadchurch’.

There are various places where you can photograph the cliffs, but one of the best views – and by a happy coincidence the easiest access – is from West Bay, just 1.5 miles south of the town of Bridport.

The dramatic East Cliff can be photographed from the eastern wall of the harbour or from the beach, both just a couple of minutes walk from the car park by the Bridport Arms. This is a location which works well at sunset from early September to April, as the setting sun bathes the sandstone cliffs with a golden glow.

From early December to early January, sunrise shots also work well here, with the sun rising over Portland in the distance.

Drive west past Bridport on the A35 and after a mile or two you will see the distinctive conical shape of Colmer’s Hill. It is topped by a clump of pine trees which were planted during the First World War. There is a small lay-by where Quarr Lane joins the A35 in which you can park, and from here it’s a short walk to one of several viewpoints. Take great care entering and leaving the lay-by as it’s on a blind summit.

Walk along Quarr Lane and then a footpath to the bottom of Quarry Hill, where there a good views of Colmer’s Hill, or climb up Quarry Hill for a more elevated view of your subject and the surrounding landscape.

This is very much a sunrise location, with autumn and spring being particularly good times when there is the possibility of mist.

Dorset is so jam-packed with amazing locations, that choosing just 10 is a daunting task – I could probably name double that number all within 5-mile radius of my home on the Isle Purbeck – but you have to start somewhere.

In my choices I’ve tried to mix some of the iconic locations on the Jurassic coast with some of its hidden gems, as well as a few of the more photogenic locations inland. Enjoy your visit!