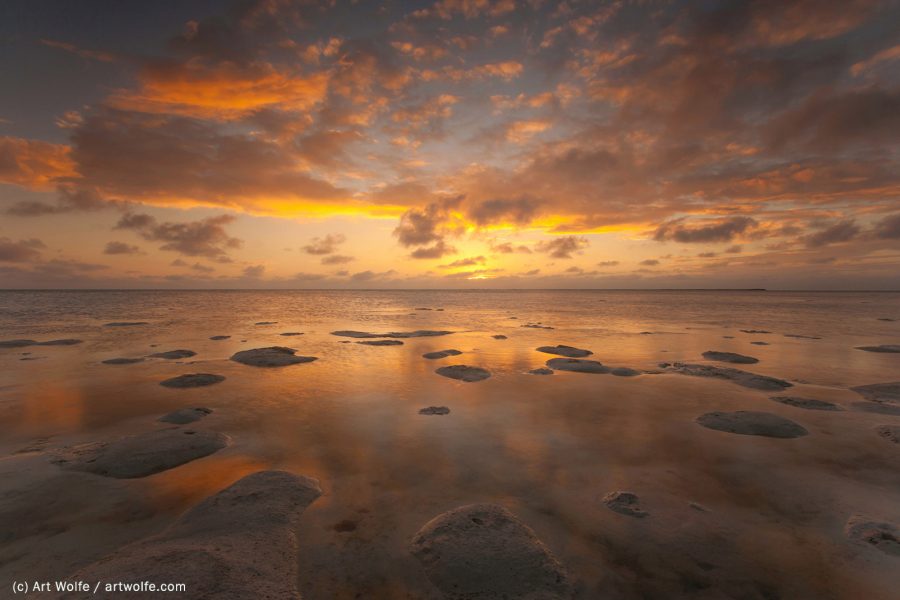 This is an excerpt from The New Art of Photographing Nature: An Updated Guide to Composing Stunning Images of Animals, Nature, and Landscapes (Amphoto Books, $29.99). A book by world-renowned photographer Art Wolfe, and writer and photo editor Martha Hill, with digital imaging expert Tim Grey. Available in bookstores everywhere and on the Art Wolfe website.

One of the most common errors I see in portfolio reviews is the placement of the horizon in the middle of the photograph. In my opinion, this flattens out the image, creating less of a sense of depth. Placing the horizon high or low in the frame can create a dynamic that allows the eyes to wander through the image far more easily.

In the first image (above), with the horizon in the middle, the eye just stops. In the second (below), the high placement of the horizon allows me to add more foreground, showing the expanse of beach and tide. There is a nice play between the forms of sand and the drama of the setting sun.

In the third shot (below), with the horizon low in the frame, the focus is on the sun and how it reflects on the water, giving greater emphasis to the clouds overhead. High and low horizons create less predictable images and, to my mind, a greater sense of depth and drama.

Because the horizon line is so straight,  it cuts the picture space into definite sections and has to be factored into what you want to emphasize. In each of these images, we get a slightly different sense. Placing the horizon in the middle might be desirable if stability and tranquillity are what you want to convey. However, it relies on a very dramatic sunset to make a powerful statement.

With a horizon placed high in the frame, the foreground becomes more important and requires either a texture or an interesting detail. However, if the drama of the sky is more powerful, then lowering the horizon is a better option.

Despite what I said earlier about drama and depth, there are definitely instances when I will put the horizon right down the middle to create a sense of symmetry. If there are two elements in equal balance, placing the horizon in the middle works well, as does dividing the image in half using a strong vertical line.

In the image shown below, the graceful boughs of an alder tree reach down and touch the surface of Lake Crescent on Washington’s Olympic Peninsula. I wanted to give greater play and emphasis to the way the lines meet at the water’s surface. Rather than trying to create a sense of depth, I wanted to emphasize the reflection, and the abstraction it created, by drawing the viewer’s eye to the precise spot where the lines converge.

In the next image, I was able to take advantage of the perfectly still waters in a canyon in western Australia. Not only is the darter sitting on the rock perfectly reflected, but the red canyon walls give the image a coppery glow.

The important centerline may not be the actual horizon line, or shoreline, but the line dividing the reflection. With the Lake Crescent image, I’ve made a symmetrical composition, like a Rorschach inkblot, by putting the mirror-image reflection in the middle on the horizontal axis. However, it is not symmetrical in the vertical, and that is what gives the picture its dynamism. The heavier branch on the left creates a strong sweeping line, complemented by the more delicate arc of the right side.

In this darter image, I placed the bird and rock centrally on the vertical, but not the horizontal. The weight of this image is slightly lower in the frame, just far enough off the middle to make it interesting. In both of these images, this slightly off-balance tension enhances the visual interest.

Generally, the horizon line has the character of strength and stability; it dominates the composition and demands to be straight. Because our expectation is always for a level horizon, a tilted horizon is disconcerting to the eye. Images with- out enough room to correct this problem would not be publishable.

Placing the Horizon Off Center

By placing the subject directly in the middle of your frame, you effectively flatten the image, making a more abstract statement. However, in many cases, this is not the desired effect. And once you remove the horizon from the middle, it is possible to create a much greater sense of depth and dynamics.

Punch Bowl Falls is a very famous feature  in the Columbia River Gorge. In the first image (above), I placed the horizon in the middle of the frame; the eye goes directly to the waterfall and stops. In the second image (below), I selected a wider angle, placing the waterfall in the upper quadrant of the image. This allows me to incorporate the reflective water owing toward me and, using a polarizing filter, show the submerged rocks. The interest created by the rocks and water balances the waterfall and creates a depth to the photograph that is absent in the first image. 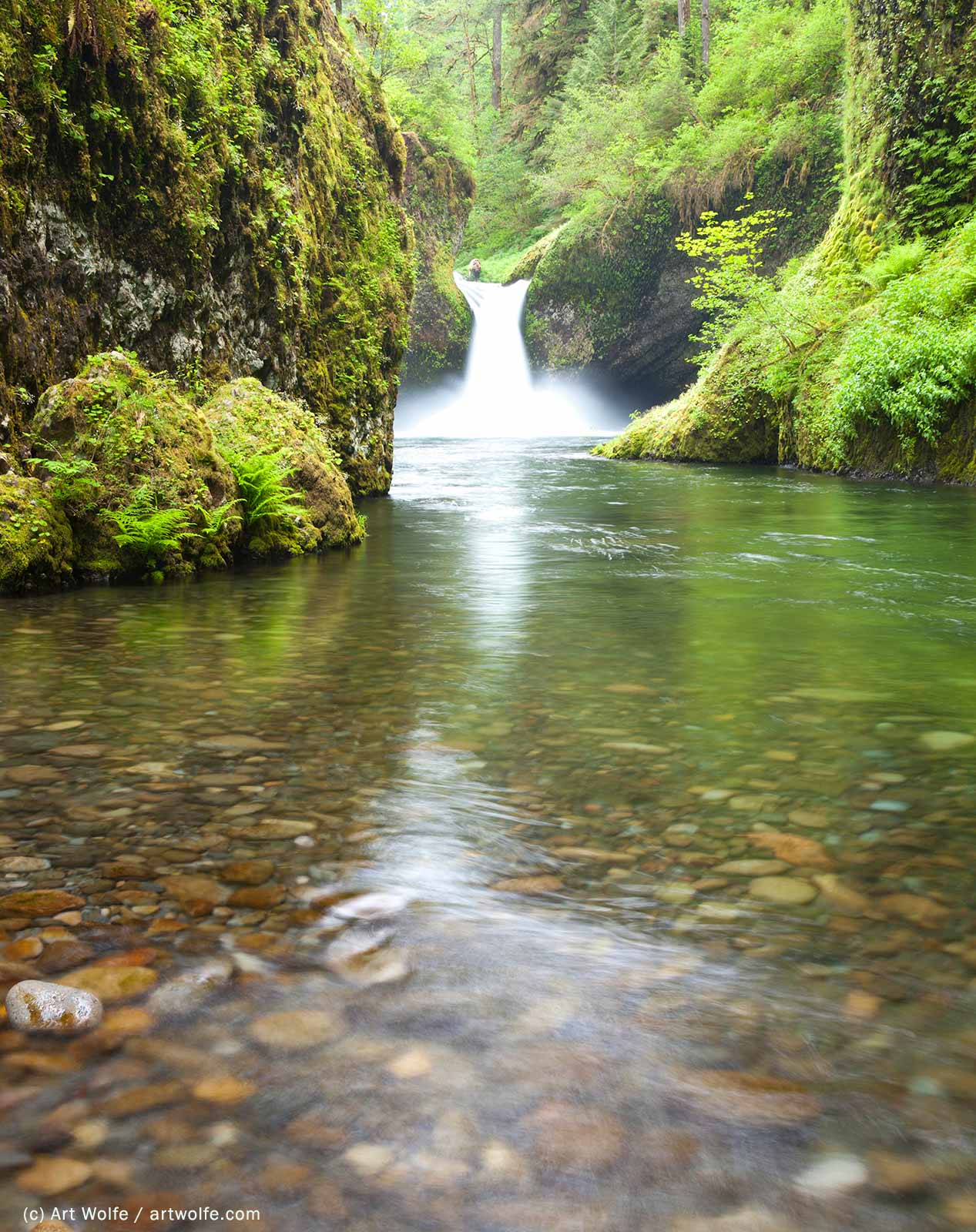 For the image of Torres Del Paine (below), I chose to lower the horizon to accentuate the dynamic, vertical sweep of a lenticular cloud.

In the second image, the placement of the waterfall higher in the frame creates a sense of depth by drawing the viewer into the picture space. Because the eye travels deep into the picture to the waterfall, it is as if we are re-creating the experience of finding this scene on our own. The version with the centered placement may be the more normal perspective, but it lacks the enhanced sense of discovery of the second composition.

The horizon is, by definition, horizontal. Enclosed by a horizontal frame, its energy seems to spread sideways. When a landscape with a horizon is photographed vertically, interesting possibilities arise. The eye’s attention is more easily drawn to the upper or lower portion, depending on where the horizon is placed. Certain tall vertical elements, such as trees, often demand to be photographed vertically to create the proper impression of height or majesty.

In the third image, the low placement of the horizon gives the cloud maximum emphasis and creates a wonderful energy. It actually feels as if the cloud is pushing down the rugged landscape beneath it, which, by its darkness and solidity, gives weight to the picture and anchors it. This is a landscape of high winds and rapidly changing climatic conditions, and this photo captures a sense of that power.