Nature Photography Guide to the White Cliffs of Dover 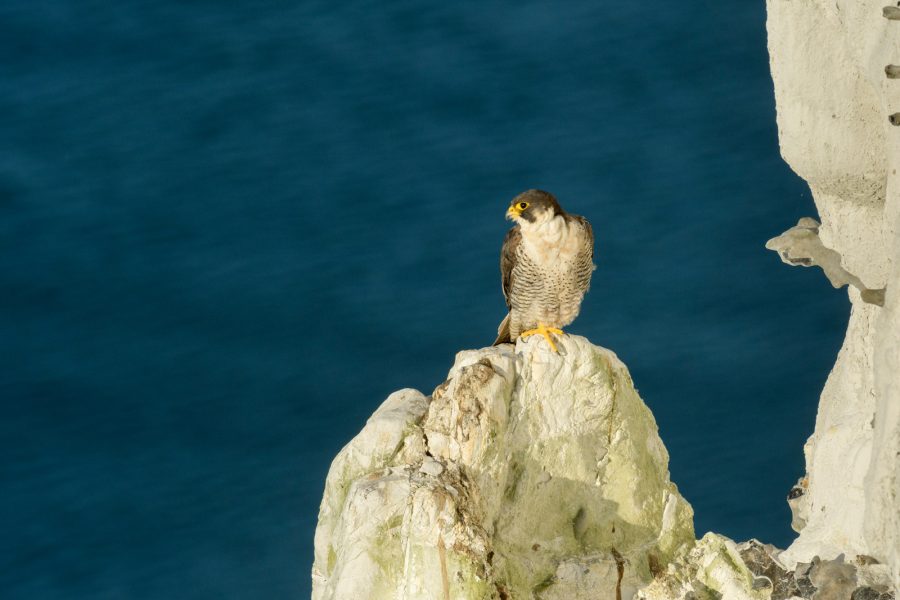 As a symbol of British nationalism, the White Cliffs of Dover hold special cultural and historical significance. They are celebrated in the famous song “The White Cliffs of Dover”, the lyrics of which were written a year after the Battle of Britain, at a time of existential threat, by an American who’d never seen the cliffs (or Britain).

The cliffs are located where the chalk strata of the North Downs meet the English Channel, which is steadily eroding them away. Chalk, or calcareous grassland, is an internationally rare habitat, of which the UK has a significant proportion.

The thin layer of nutrient-poor soil supports a range of wildflowers, some of which are specific to this habitat. Invertebrates are abundant on healthy chalk grassland, of which the most easily observed are bees and butterflies. The chalkhill blue butterfly is a specialist of this habitat.

The main cliffs stretch from just east of Folkestone over to Kingsdown, but I’ll concentrate on the area between Dover Docks and South Foreland Lighthouse, which is owned and managed by The National Trust.

Read more: Top 10 Locations for Wildlife Photography in the UK

The Saxon Shore Way, a long distance public footpath, runs right along the cliffs. It can be accessed just above Dover Docks to the west and South Foreland Lighthouse to the east. There is a National Trust car park, cafe, and visitor centre above the docks, signposted from Dover town off Upper Road.

If you continue along Upper Road past the coastguard station, you will see a lay-by with room for around ten cars. From here there is a farm track that takes you between arable fields, directly to the middle stretch of the cliff.

Be aware this isn’t a public right of way, but it is well used. So much so that, to be sure of a parking spot, you’ll need to get there early. The lighthouse has a very nice cafe but no public parking. The Ordnance Survey Explorer map 138 will be useful for planning your visit.

Wildlife on the cliffs

Peregrine falcons returned to the cliffs as they recovered nationally during the 1990s, and can be found anywhere along the white cliffs. Ravens returned to breed in 2009 after an absence of 120 years. These buzzard-sized corvids are often heard before they are seen, and are also present all along the cliffs.

The raven’s smaller relative, the jackdaw, is common on the clifftops. Herring, lesser black-backed gulls, and (more rarely) great black-backed gulls soar along the cliff face, presenting great opportunities to photograph them from above.

Fulmars breed on cliff ledges and are common. Sadly, the 3000 breeding pairs of kittiwakes have steadily declined over the past few years, and are now very few.

Wildlife of the grassland

The farmland and chalk grassland behind the cliffs are excellent for skylarks, which have undergone a drastic decline in the UK. On a hot summer day, lying on your back in the grass and watching a skylark ascend to invisibility, while its song is still heard, is time well spent. 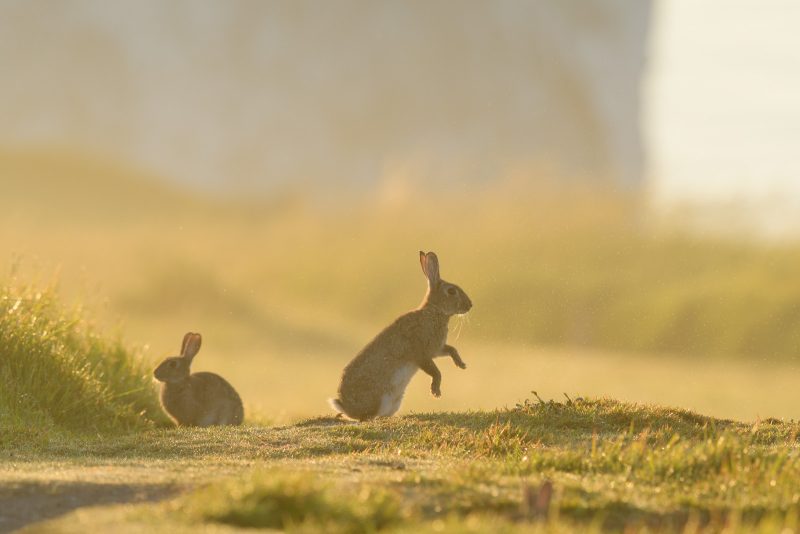 Due to the proximity of mainland Europe (on a clear day you can see France), spring and autumn are excellent for passage migrants. Sheltered scrub, particularly around Langdon Hole, is a good place to look.

Kestrels hover above the field margins and areas of longer grass. In 2017 the National Trust bought up some of the arable farmland behind the cliffs to extend the wildlife habitat, and this has been sown with a wildflower mix. In summer, butterflies are everywhere on the cliffs.

Rabbits are an important natural grazer of chalk grassland, and the National Trust also uses Exmoor ponies for conservation grazing. Other mammals are rarely seen, but foxes hunt in the arable fields and margins where there is plenty of cover.

Peregrines can be encountered any time of year, but are much easier to find when they are raising young. The cliffs are over 100 metres high in places, and peregrines nest on the most inaccessible ledges, so disturbance of this Schedule 1 bird at the nest isn’t an issue. 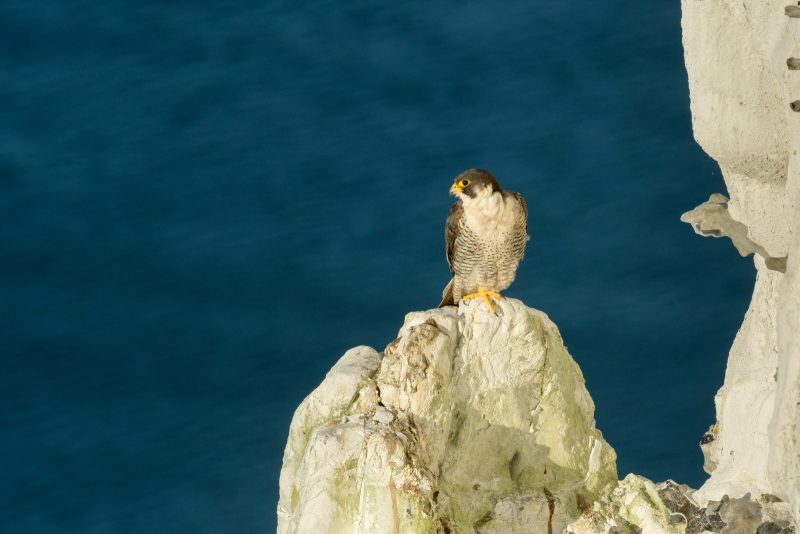 Fledged chicks are usually passed food on the wing, but occasionally on the cliff top, so caution is required in order to not disturb dependent young. A long lens is the order of the day with peregrines, the longer the better: at least a 500mm or 300mm with converters.

A fast focusing camera with good tracking ability is ideal. Despite being the world’s fastest bird in a stoop, when soaring along the cliffs, they are not usually flying too fast. Ideally, a shutter speed of around 2000 to 2500 secs would be useful.

Manual exposure works best, as the camera meter will be confused as the background changes from the white cliff face to the darker sea. 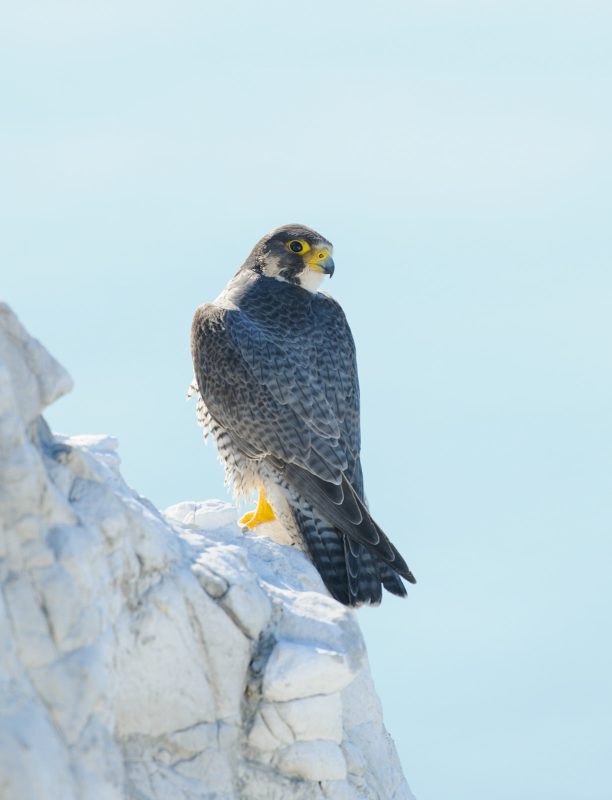 Walking along the cliffs and looking for the birds works, but in my experience it’s best to observe the birds with binoculars for a while, and figure out the best place to wait for a fly past, and the location of their current favourite perches. Peregrines often use flints sticking out of the sheer chalk face on which to perch.

Read more: Birds of Prey – How to Find and Photograph Raptors

Much of the information pertaining to peregrines also works for ravens.

However, ravens fly below the cliff top less often than peregrines – but they do still do it, particularly if also raising young. Exposure is trickier with ravens as they are all black, and manual exposure is essential.

I usually expose so the chalk is right on the point of blowing out, so I get enough exposure for the raven. Having highlight warning enabled on playback is essential, and zebras in live view even better.

Skylarks nest on the arable land behind cliffs, in the field margins, and in wildflower meadows on the clifftop. The latter is the best place to photograph them bringing food to chicks in summer. It is absolutely essential that you don’t actually walk into any of these areas when there could be active nests.

It’s easy enough to watch from a footpath to see which route the adults usually take in to a nest, and photograph them on the way in.

It’s best to pick them up when they are silhouetted against the sky. This allows the camera to lock on to the fast moving bird and track it into the long grass, at which point the camera focus will usually lose it.

If the nest is near a fence line, the adults will sometimes perch briefly on a post before dropping in. The birds fly in quickly, and a fast shutter will be needed to get them in sharp focus.

Make sure you are in a position on a well-used path, and are not too close to a nest to stop the adults flying straight in. Watching from a distance with binoculars to locate nests, before attempting to photograph, is best.

Using a macro lens means an early start, in order to catch the butterflies before they warm up and become active. Once the sun hits them you have a very short time to get a photo in nice light before they fly.

My favourite way to photograph butterflies (this also applies to bumblebees) is to use a reasonably close-focusing telephoto (300mm f/2.8, for example), with either a 1.4X or 2X converter. This gives you extra reach without affecting minimum focusing distance. If also combined with a crop sensor camera, you can gain another 50% or more.

I then place myself near an attractive group of flowers and, with the lens on a sturdy tripod and gimbal or fluid head, track the insects as they flit between the blooms. They don’t stay on each flower for long but, with a fast-focusing camera, it’s also possible to get them in flight as they land or take off again.

Being in a fixed position, it’s not easy to catch an open-winged butterfly fully in focus using a fairly shallow depth of field, so try shooting hand-held and shifting position slightly, to keep the camera sensor parallel to your subject.

If I find a butterfly is in position for a longer period, say it is just warming up or mating, I’ll go in much closer, as long as I can do so without trampling any of the surrounding habitat. I’ll use a hand held wide-angle lens to show the subject in the context of its environment.

Read more: How to Compose a Macro Photo

As one of England’s most iconic locations, the area of the White Cliffs of Dover gets busy with visitors, particularly on holidays and weekends in summer. This isn’t a problem when photographing birds from the cliffs, though peregrines and ravens rarely land on the cliff tops when there are lots of people around.

Visitors are asked to keep dogs on short leads from March to July to protect ground-nesting birds.

Despite being so popular with local and foreign tourists alike, the cliffs are an excellent location for wildlife photography, with a wide range of subjects available. It’s not at all unusual to have the place to yourself on an early morning visit.

And it’s going to get even better. The Wildwood Trust and Kent Wildlife Trust are planning to release captive-bred red-billed chough to the cliffs over the next couple of years, after an absence of 200 years.

If successfully established, this will be the only population of chough in the east of the UK. It will be quite something to see this stunning bird over the White Cliffs of Dover, and will hopefully make up for the absence of bluebirds.