How to Photograph Rabbits 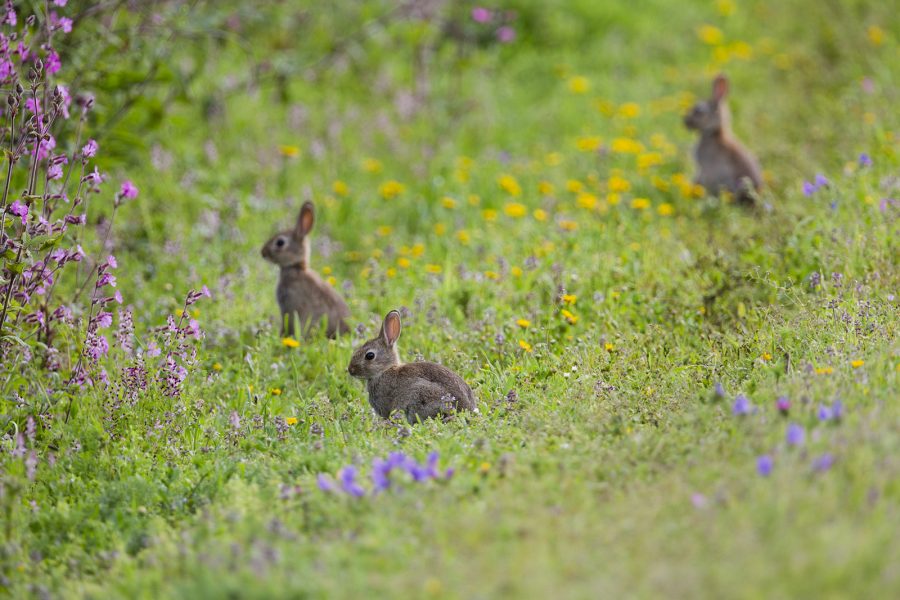 I suspect that rabbits aren’t high on the list of ‘most wanted’ wildlife photography subjects. Maybe this is because we regard them as common. But, did you know that rabbits are suffering a serious long-term decline, which has seen them lose 60% of their UK population in 20 years?

The effect of myxomatosis varies with the density of the population, so the number of rabbits has always fluctuated. However, the recent downward trend is longer term, and is largely due to the spread of a new sickness called Viral Haemorrhagic Disease (VHD).

Regardless of how common rabbits are, I would argue that they make wonderful photographic subjects. They are tremendously cute, with a broad appeal amongst the general public.

They have highly attuned senses worthy of the best comic book superhero, and have a remarkably high level of fecundity. This means we can aim to photograph a complete life cycle within a short period.

If we miss a stage we are likely to get another chance very soon!

The rabbit is such a familiar mammal that it really doesn’t need much of an introduction. There is one possible confusion species in the UK: the brown hare. Superficially similar, the brown hare can be distinguished by the dark tips to its ears, and its much longer legs.

Their habitat choices are slightly different too, with brown hares preferring wide-open spaces, such as those found in large, arable fields, or pasture amongst open moorland.

Some rabbits make their nests in dense scrub, but most live underground, often in extensive warrens. They need to give birth in a protective environment because, unlike hares, rabbits are altricial, meaning their young are born blind and bald.

In each litter, there can be as many as twelve kits. A doe rabbit can raise as many as six litters each year, though a more typical total for the year is probably between ten and twenty young from each doe.

Still, this is quite a rate of reproduction. The phrase ‘breed like rabbits’ does have some foundation in fact.

Rabbits mark their territories using a scent gland under their chin, and they also leave piles of droppings in obvious places, such as on anthills, or in scrapes which they dig in the dry soil. It is the nature of the soil which determines the best places for rabbits to live.

They love sandy soil, which is easier to dig, but dislike wet ground. So, banks of dry earth are particularly suitable for them. They can be found around the edges of farm fields, in gardens, parks, meadows, railway embankments, and even woodland.

Their diet consists of a wide variety of plant-matter, including leaf crops, but their favourite is grass. Because grass is quite difficult to digest, rabbits use a strategy known as ‘refection’. This means they eat some of their own droppings, to enable them to extract the maximum nutritional benefit from their food.

Rabbits are one of the most observant species of the countryside. They have eyes on either side of their heads, giving them almost 360o vision, and very large ears which can revolve to pick up all-round sound.

When under threat of danger, a rabbit will thump its foot on the ground to warn all its mates, and they will all be gone in the blink of an eye. In a nutshell, if a rabbit doesn’t want to be photographed, then it won’t be!

That said, I have come across many rabbits which, for one reason or another, are more approachable. These individuals are often found in parks and gardens, where they become more accustomed to people.

However, there have been occasions where I have found obliging rabbits in the wider countryside. So, the first job of the photographer is to find a suitable family of rabbits, before trying to start a photographic project.

The usual rules of fieldcraft apply. You should wear camouflaged or toned-down, rustle-free clothing, and should always keep a low profile when approaching rabbits.

This usually means lying down, to avoid your outline breaking the horizon from the rabbit’s perspective. You should also avoid wearing strong-smelling perfumes, because rabbits have a good sense of smell.

I have used hides to photograph rabbits. I prefer hides which can be used at ground level rather than seated, but I prefer to look for opportunities that don’t require hides.

For example, I tend to look for rabbit warrens where there are natural banks of earth. These provide me with the opportunity to approach unseen.

Rabbits are mainly nocturnal: they are most active at night, but not exclusively. In fact, they can be active throughout the day, particularly when it is dull. They also enjoy coming out of their warrens to sunbathe, particularly on warm evenings.

The most productive times to photograph rabbits coincide nicely with the best light of the day: just after sunrise, and just before sunset.

Many of my most successful photographic sessions have taken place when I have concealed myself close to a warren a few hours before sunset, and laid down to wait for the rabbits to emerge from their holes.

Read more: How to photograph nervous and sensitive animals

Another very successful strategy for rabbit photography is to use a car. An unfenced road leading through rabbit-rich territory can present some easy opportunities for wildlife photographers, but you must always be considerate of other road-users. Never put yourself or others at any risk by parking in unsuitable places.

When photographing from a hide, there is a chance that rabbits might come quite close. A 300mm lens might be sufficient for frame-filling shots, but generally I have found that a 500mm f/4 or 600mm f/4 lens (on a full frame camera) is required.

My strategy with exposure is to start with an ISO of 800 and use my lens aperture wide open. This blurs the background and gives me the fastest shutter speed possible. Even for fairly static portrait shots of rabbits, a shutter speed of 1/500th of a second or faster will be helpful when using a long lens supported on a tripod or beanbag.

If you want to be ready for some sudden action, the shutter speed should be 1/2000th of a second or faster.

An apple a day

Recently I have been experimenting with baiting rabbits. I’m not aware of many photographers using food to attract rabbits, but it is possible. Bugs Bunny was famous for eating carrots, but the rabbits that visit my garden have a penchant for apples.

As well as throwing out a few apples and photographing the rabbits with a telephoto lens from my house, I have been able to use a wide-angle lens to get some close-up shots of them.

Read more: How to photograph wildlife using a wide-angle lens

To do this, I have made a platform for my camera to rest on the ground. In front of this, I stake out an apple or two, using tent pegs concealed from view.

Using a wired remote release, which I have extended to reach my house, I trigger the shutter when the rabbits are feeding (wireless remote releases can be used).

Fortunately, the rabbits don’t seem too concerned by the sound of the camera and, after a brief flinch, they usually carry on feeding.

Since I am using a 16-35mm lens for this technique, my technical settings are slightly different. For this sort of photo, I want to try to show the rabbit and the surroundings reasonably sharply, so I put my camera in aperture priority and select an aperture of f/8.

I use manual focus to focus on the apple and set an ISO of 800. I can be fairly confident that these settings will give me a fast enough shutter speed. The alternative, which I always consider, is to put the camera in manual exposure, choose both shutter speed and aperture, then set auto ISO.

I have spent many happy hours photographing rabbits, and still there are many different aspects of their behaviour that I haven’t been able to capture in camera. So, my journey goes on!

One thing is for sure: if rabbits do become less common in the future, I will be grateful to have plenty of photos already in the bag. But, to be honest, I don’t choose my photographic subjects based upon their rarity. I choose according to availability and appeal. Currently, rabbits lack neither of these attributes.