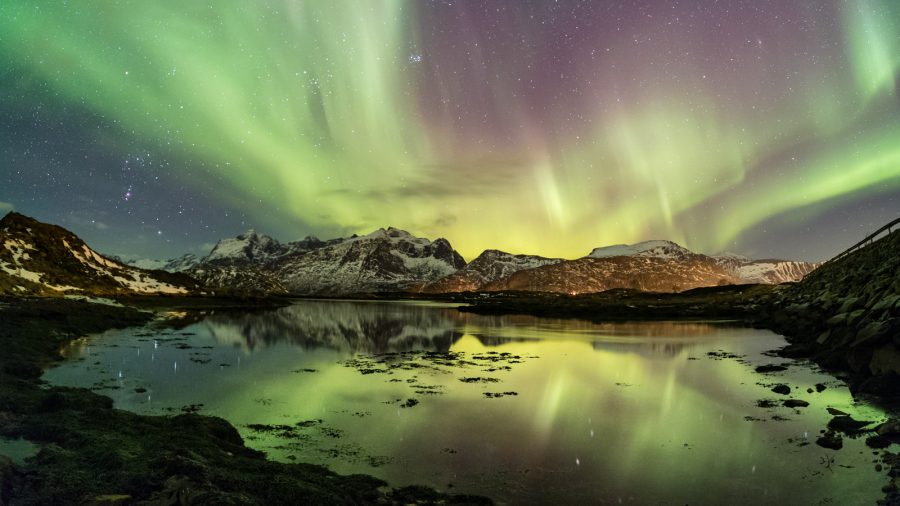 I believe that panoramas of the Milky Way, arching above breathtaking landscapes, have helped to get more and more people interested in astrophotography during the past few years. It’s not just deep sky images, or photos of total solar eclipses.

It is not very difficult to take such panoramas. Stitching them, on the other hand, can get messy. In this tutorial, we’ll look at how to take panoramas of the night sky.

1. Get familiar with the night sky

Firstly, before getting to gear and stitching, there’s one thing to know. To be successful in assembling panoramas of the night sky, you have to learn about the night sky. You need to familiarise yourself with the general shapes of constellations.

There’s one good reason for that. Sometimes, after stitching a panorama, constellations might miss one or more main stars. On the other hand, some stars might be doubled up. Show that panorama to an amateur astronomer or an experienced astrophotographer and they will raise an eyebrow.

Let’s take the next panorama as an example. It’s a photo taken in the Lofoten Islands. At first glance, it might look ok. But, on closer inspection, you can see that the very familiar constellation Ursa Major misses one of its main stars.

The constellation of Lyra also misses a star, but that is tougher to spot. This was a stitching error made by Adobe Lightroom. After stitching the photo in a dedicated panorama software, Ursa Major looks as it should. 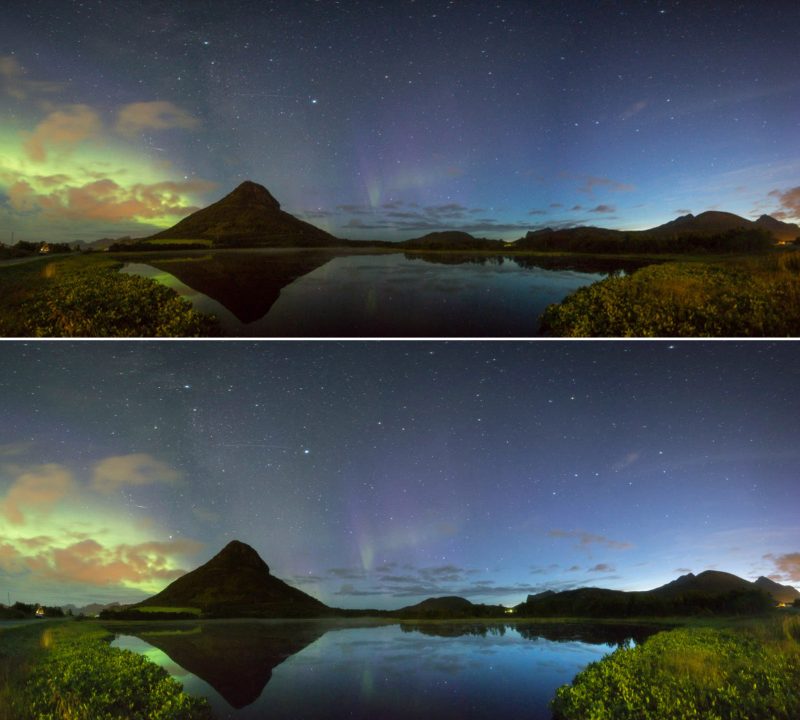 If you are already involved in astrophotography, you most likely won’t need any specific new gear. Basically, you need a camera, a fast wide-angle lens, a cable release, and (very importantly) a stable tripod.

Probably the most important piece of gear for shooting panoramas is a good tripod head.

Most of the time, you will not need a special panoramic head that allows you to rotate the lens around its nodal point. Such a head is useful if you have prominent elements close to the camera. With a normal head, parallax shift will be a huge nuisance in those conditions.

If you are on a beach with some intriguing rock formations and you want to position your camera pretty close to those rocks, a panoramic head will come in useful.

Otherwise, if your foreground is pretty clean, a normal tripod head will do great. You can use either a ball head or a 3-way pan and tilt head. I prefer the latter, especially when shooting multi-tier panoramas, as they allow for better control when positioning the camera. For single row panoramas, I am fine with a ball head.

Choose a head with a very smooth movement around its vertical axis (also known as azimuth axis). If the head has some degree markings it’s even better, as it will allow you to move the camera more easily and more consistently between two consecutive exposures.

Some people love a levelling base under their tripod head. That’s because a level tripod head is paramount when shooting panoramas. I used one a few times, but I can’t say it’s a must. You can level the head only by using the legs of your tripod, but I agree it can be done more easily with a levelling base.

The first thing to do before starting to shoot is to level the tripod head and camera. This is very important, as otherwise you will end up with a warped panorama that will need a lot of cropping.

Regardless of whether you’re shooting single row panoramas or multi-tier ones, one word should be repeated like a mantra: overlap, overlap, overlap. To be more specific, in order to help your stitching software assemble the panorama by finding common elements in adjacent images, you need to overlap individual frames by quite a bit.

Overlapping adjacent frames (vertical or horizontal) by 40 to 50 percent is good practice. I always overlap them by 50 percent. There’s no such thing as too much overlap.

You can either move the camera from one frame to another by looking through the viewfinder of the camera, or look on the display and estimate the overlap. If you want to be more precise, use the gradations on your tripod head.

Let’s suppose you work on a full frame camera with a 24mm lens in portrait orientation. In this case, the field of view will be around 75 by 55 degrees. You will have to rotate the camera by roughly 27 degrees in order to get an overlap of 50 per cent.

If you’re shooting in landscape orientation, you will rotate the camera by roughly 37 degrees. Most likely, you will not have markings for each degree on your tripod. Just round up the value to a convenient one that can be easily set on your tripod head (use 30 degrees instead of 27, for example).

Shoot individual frames in portrait orientation. You will avoid shooting multiple row panoramas this way, if you use a lens with a focal length between 8 and 24mm. For longer lenses, you might need to shoot two or three rows of photos for your panorama to have enough sky coverage.

Always shoot one or two frames to the left and right of your intended panorama view. This helps a lot with stitching, as you might get some weird distortions on both sides of the panoramas. If you shoot wider than needed, it will be easier to correct those distortions or crop the image.

You need to move pretty fast when shooting panoramas, as the sky is moving too. If you shoot too slowly, you will have problems when doing the final stitch – especially on the horizon.

Read more: How to Photograph the Northern Lights (Aurora Borealis)

You’re not limited to wide-angle lenses when creating panoramas. Shooting with lenses longer than 35mm will produce panoramas with impressive detail when viewed full size. You can even use tracking on each individual frame for beautiful deep sky vistas.

Also, when using longer focal lengths, you will need to shoot multi-tier panoramas. Firstly, you shoot a row of photos along the horizon. You move the camera up, so that the next row overlaps by 50 percent with the lower row, and take another sequence of images.

The number of rows you want to include in your photos depends only on the coverage you need for your final image. You can even shoot all-sky panoramas this way. It will be challenging, but the result can be breathtaking.

When shooting such multi-tier panoramas, it might be helpful to use a motorised tripod head that is specially built for taking panoramas.

Everything is easily controllable from a smartphone app via WiFi, and you can also use the device for tracked photos of the night sky with wide-angle lenses. There are even more complex and expensive devices that can automate the whole process.

Such devices are produced by GigaPan, for example, and can move the camera in both directions.

In terms of actually shooting the individual frames of the panorama, it’s no different to shooting those frames outside of a panorama. Just be sure to keep the exposure short enough for stars to stay round.

And, don’t forget to have Long Exposure Noise Reduction (LENR) turned off, as that will consume precious time in-between frames.

Something that might prove slightly more of a challenge is a panorama shot when the sky is not completely dark. Let’s say, you want to take a panorama and include a conjunction at twilight.

Given that there will be enough light around for the camera light meter to work, you might be tempted to work in aperture priority mode. Do that, and you will end up with an unevenly lit panorama, with weird gradients in the sky. Instead, use manual mode, and keep the same exposure parameters for all individual frames in the panorama.

Once the individual frames are taken, the next step is to stitch them. Single row panoramas will be pretty easily stitched by Adobe Lightroom or Photoshop. For more complex multiple row panoramas, you will need special software like Microsoft ICE (only for Windows users), HugIn (free), or PTGui (paid).

I would recommend using HugIn or PTGui. They are more capable than ICE, but ICE is still a really good piece of software too.

If you already have some experience in deep sky astrophotography and are used to software like PixInsight or Astro Pixel Processor (APP), you can also stitch panoramas using these pieces of software. APP is particularly well suited for stitching panoramas shot at long focal lengths.

Don’t be surprised if software like Adobe Lightroom or Photoshop produce some very strange results (or don’t work at all) when trying to stitch multi-tier panoramas, or panoramas that only show the sky.

They are not made for this- the latest versions will perform a bit better, though. For single row panoramas shot along the horizon, they will do a pretty good job in maybe 80% of situations.

Take your time and read the manual, or watch tutorials that teach you how to use software like PTGui or HugIn. PTGui is way more straight forward than HugIn, which is pretty technical and not extremely intuitive.

The main idea with panorama software is that you can select common features (like bright stars) in adjacent images, thus helping the machine better stitch the images. It might be tricky in the beginning, and even a bit counter-intuitive, but it will get easier with time.

Once the panorama is stitched, you can play with different projection types and see which one suits the image better. There’s no universal recipe here.

Once stitching is done, bring the resulting file into your favourite software for post processing. You can have a look at my article on post processing, if you need any tips and tricks.

It might happen that, after stitching a panorama, the horizon ends up a looking a bit wavy. This can be corrected, with patience, in Adobe Photoshop by using the Transform tools.

Creating panoramas of the night sky is not very difficult, and the final results can be outstanding, especially if printed in a large format. You can spend plenty of time trying to find all the little gems hidden in such panoramas.