How to Photograph Coyotes 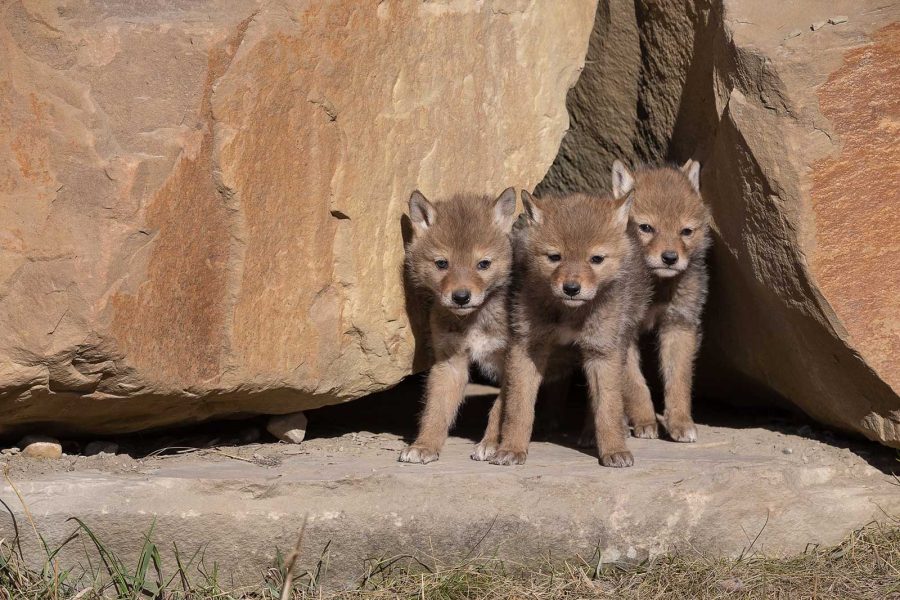 The coyote (Canis latrans) is an animal that has captured imaginations through the ages; from the mythological symbol featured prominently in many North American Indigenous cultures and oral traditions, to the celebrated character of Wile E. Coyote in Looney Tunes cartoons. Part of the Canidae (dog) family, the coyote is an intelligent, adaptive, and beautiful animal.

In the Canadian Rockies, coyotes live among other members of the Canidae family, including the grey wolf and the red fox. At maximum weights of roughly 44 lbs (20 kgs.) for an adult male and 40 lbs (18 kgs.) for an adult female, the coyote is smaller than the wolf but larger than the fox.

Like these other members of the Canidae family, coyotes have stunning pelage, prominent, pointed ears, and large, bushy tails making them attractive subjects to observe and photograph.

Below are a few tips on how to capture images of these brilliant canids in the Canadian Rockies and surrounding areas.

Locating coyotes in the Canadian Rockies

Coyotes are one of the most widespread members of the wild dog family, extending from Alaska all the way south to Central America. They are incredibly adaptive and flexible, allowing them to be at home in a range of habitats, including deserts, mountains, and grasslands. Even today, the coyote continues to expand its range. 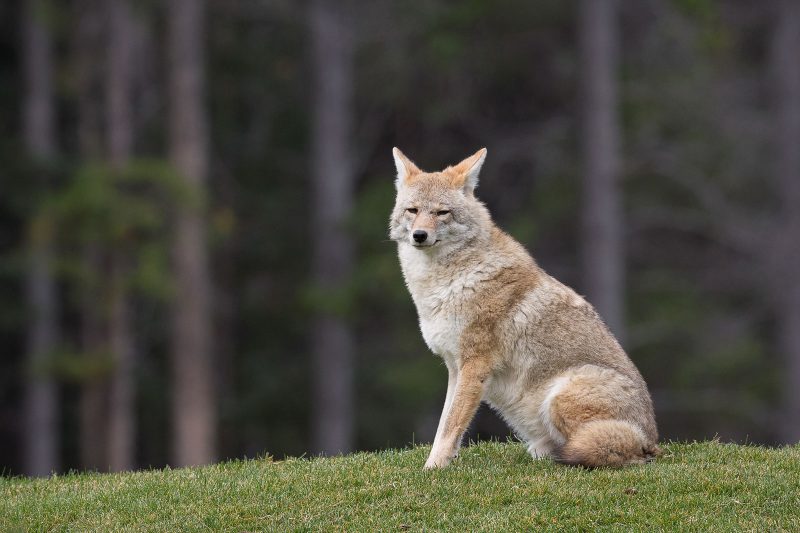 In Alberta, the Northern coyote is found throughout the montane valleys of the Rocky Mountains, the foothills flanking the Rockies, and the wide-open prairies further East.

Read more: A Guide to Photographing Wildlife in Banff, Canada 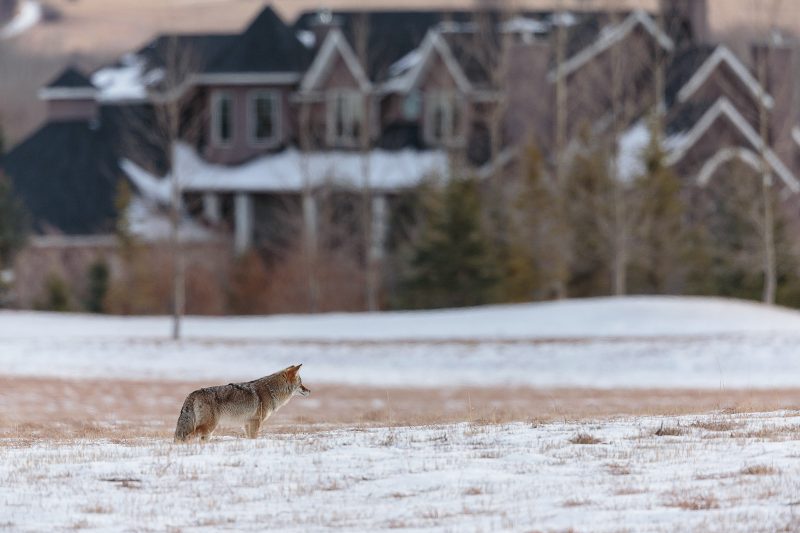 In these protected park environments, coyotes will be slightly easier to find and photograph as they are less wary of humans. Outside these environs, coyotes are often unjustly treated as vermin or pests, and face hunting and trapping pressures. As a result, they are much more cautious of humans and will often flee if approached.

Being adaptable animals, coyotes also manage to live successfully amongst us in towns and cities. This is perhaps a result of increasing human-caused fragmentation of habitat and expansion of development pushing them into urban environments. Or simply because they have found ample sources of prey, water, and shelter. Either way, coyotes seem to thrive within our municipalities. 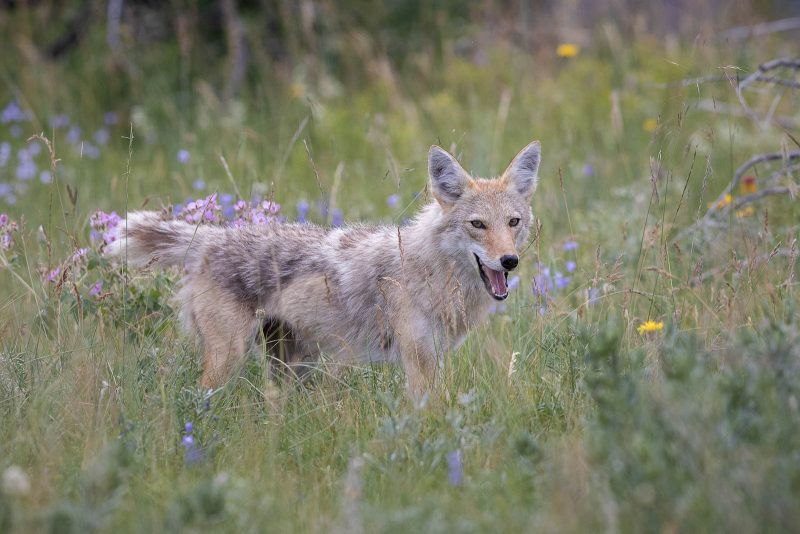 When trying to locate coyotes, be alert to signs of their presence. Scat, tracks, and dens are all clues that coyotes are frequenting the area. Having a guidebook that you can refer to when observing tracks and scat is essential.

One of my favourites is Mammal Tracks & Sign: A Guide to North American Species by Mark Elbroch. It is a fantastic resource that I refer to regularly.

Finally, being familiar with coyote vocalisations can help locate them. Coyotes are highly vocal animals and their mournful high-pitched howls and piercing yips, especially at night, will often guide you in their direction.

Although each season brings opportunities for great coyote photography, perhaps the most popular time of year to observe and photograph these wild canids is in the spring. This is the exciting time when pups are born.

Coyotes form monogamous pairs that stay together for many years. Each spring, usually in April or May, the female gives birth to a litter of pups, ranging from four to seven in number. Coyotes use dens during this time of year which can be found on hillsides, under rocky outcrops, or in thickets.

In urban environments, dens are generally found in more natural, wooded areas, such as parks and golf courses. However, coyotes will sometimes den in more surprising areas, such as rocky outcrops in the middle of populous neighbourhoods, and under the decks and stairs of people’s homes. 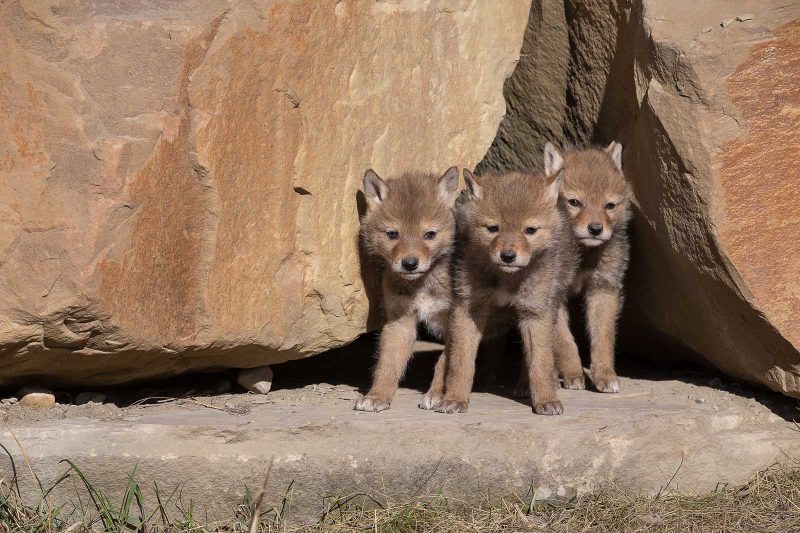 The latter locations are not ideal as it often leads to instances of coyote-human conflict. Thankfully there are many organisations in Alberta, and across Canada, that work with cities and towns to educate people about how to co-exist with coyotes.

Spring is an opportune time to capture a wide array of behaviour. Both coyote parents care for their offspring, giving photographers opportunities to capture them hunting and providing food for their young. It is also a time to capture the innocence of the pups as they explore their new world; coyote pups are extremely cute and curious.

Often you can witness playful interaction amongst the pups as they practice their hunting skills on one another, as well as affectionate and tender moments with their parents.

Winter is another fantastic season to photograph coyotes. The mating period occurs each year from January to March, and interaction between the males and females, as well as the act of mating itself, can be captured. The exchanges between the two sexes are often very playful, resulting in engaging images. 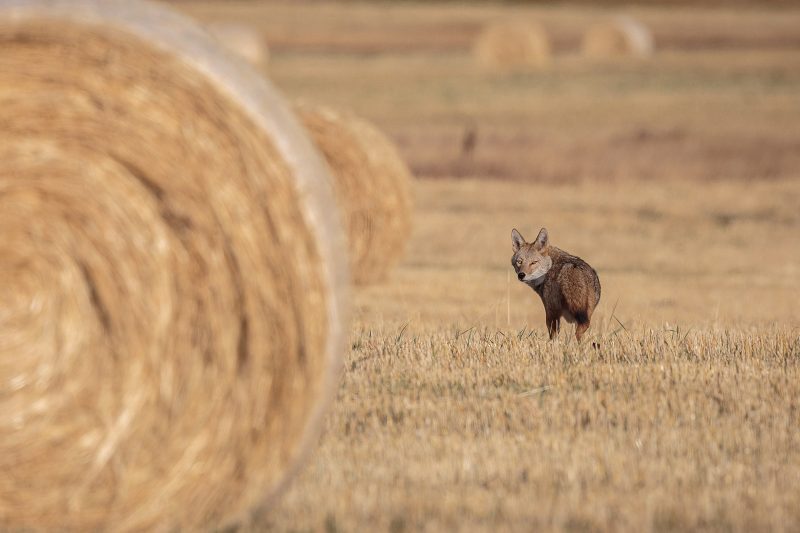 The colder months are also when coyotes look their best. Their pelage is relatively short, with dense underfur mixed with longer guard hairs, which thickens in the winter months.

Coyotes are tawny brown or grey with lighter underparts and look stunning when photographed against a backdrop of fresh, powdery snow. Tracking coyotes is also simpler in the winter as their prints are more easily identifiable in snow.

It is also important to consider not only the time of year to photograph coyotes but also the time of day. Coyotes can be seen anytime but generally, early morning and evening are when they are considered most active.

Coyotes can be photographed both on foot and from a vehicle. Shooting from a car can be very beneficial, especially when you want to minimise disturbance to the animals. Whether near a den site, or an area where coyotes are more suspicious of humans, a vehicle can be used like a blind, concealing you from their view and making you less of a threat.

One piece of equipment vital to car photography is a beanbag placed over the sides of a rolled-down window. The beanbag provides you with a resting place for your lens and provides excellent stability.

Coyotes will often travel along or beside roadways during the early morning and evening hours.

When spotted, do not chase the animal with your vehicle. Instead, identify which way the coyote is travelling and then drive ahead in that direction and pull over safely, turning off the vehicle and turning on your hazard lights. 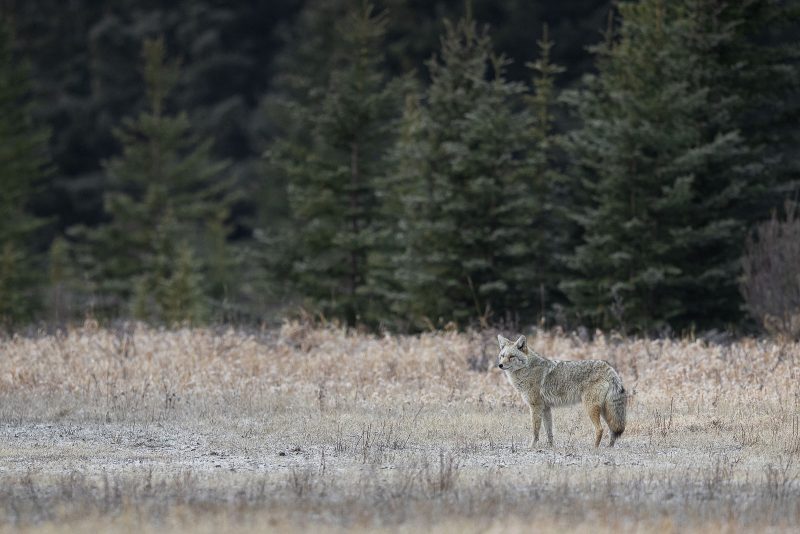 This way, you are minimising disruption to the animal and aren’t frightening it off, which may occur if you pull up next to it. This positioning also places you at a better angle to photograph the coyote, as it will now be heading directly towards you.

As mentioned earlier, coyote pups are charismatic and adorable subjects. However, photographing a den can be very challenging, and must be done ethically.

As photographers, we do not want to harass or endanger our wild subjects. The goal when photographing any wildlife should be to minimise disruption and allow the animals to act naturally.

Using a blind can ensure both goals are met. Generally, the blind should be erected at the least ‘active’ time so that you remain unseen (usually during nightfall or mid-day), and placed downwind from the den. The blind should be securely positioned far from the den, ensuring the coyotes are given ample space so the parents and pups can move and behave freely.

It is also critical to stay as quiet as possible within the blind; even a slight rustling can alert the coyotes to your presence.

Disabling camera sounds like beeps, as well as using the silent mode if available, is highly encouraged. I will often employ the electronic shutter on my mirrorless Canon R5 when I want to be as quiet as possible.

I use both a full tent-type blind and a ‘LensCoat LensHide’, which is a large camouflage covering that conceals both me and my camera. The LensHide has an opening for my lens and several mesh screens, allowing me to still see my subject while covered and out of view. 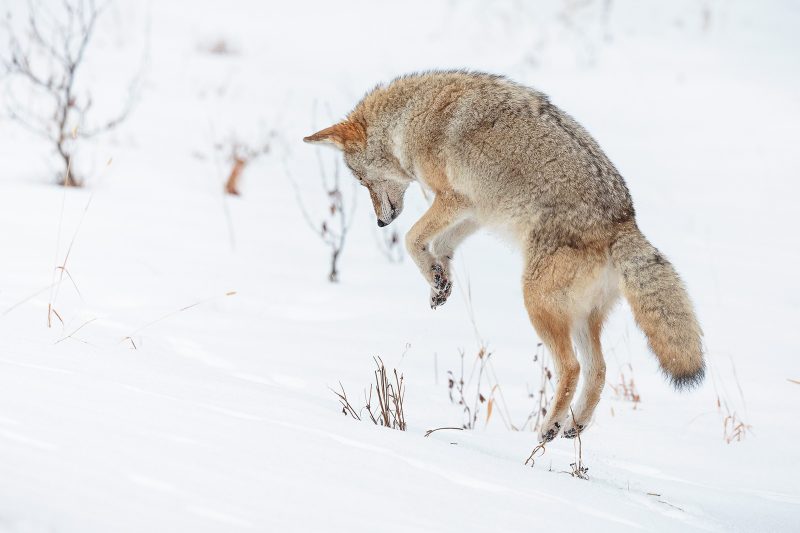 In terms of lenses, a telephoto lens is always a good option as this allows you to stay a respectful distance from the coyotes. My favourite telephoto lenses include a Canon 500mm f/4L and Canon 100-400 f/4.5-5.6L.

Combined with an extender (I use the Canon Extender EF 1.4X III), close-up portraits can be achieved from far afield. A wide-angle lens is another great choice when you want the image of the coyote to appear small in the frame. This includes more of the environment in the photograph, provides a greater sense of scale/place, and helps to tell a story about the day-to-day life of the animal.

Understanding behaviour is key to wildlife photography. This is true of all species, including coyotes. The more you learn before heading out, camera in hand, the greater the images you will come home with will be. Knowing which cues to look for in the animal allows you to anticipate action, and be ready to capture those decisive moments.

Learning about the coyote’s diet will help you locate them (prey source = predator) and allow you to anticipate hunting behaviour. Coyotes are opportunistic hunters and their diet is varied. Voles, mice, ground squirrels, hares, small birds, deer, and berries are all on the menu.

Like the red fox, coyotes will hunt for small critters in long grass in summer, and deep beneath the snow in the winter months. Coyotes have excellent hearing and upon detecting movement, they will leap into the air and land on top of their prey.

Knowing this behaviour, and watching for the intense stare and tilt of the coyote’s head as they listen for their prey, will alert you to the impending jump. You will be prepared to capture the action with your camera settings locked in – high shutter speed, AI servo AF mode for continuous focus, and burst mode. 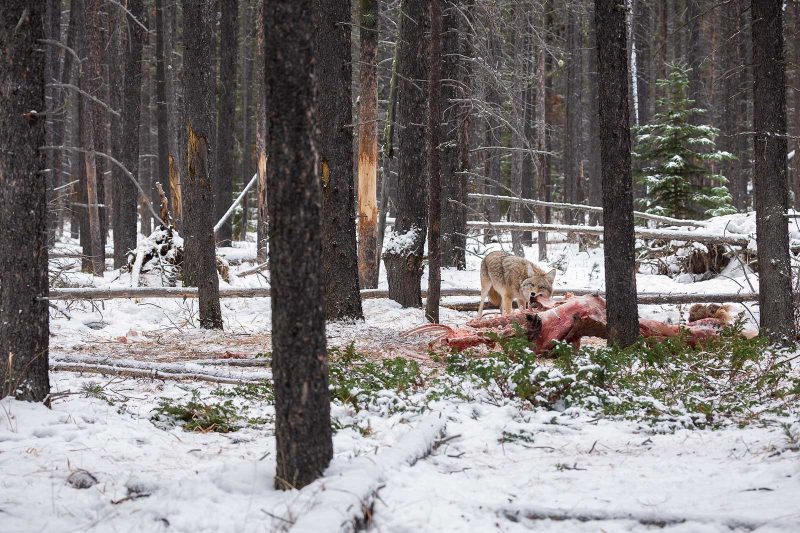 Coyotes will also often feed on carrion (carcases left behind by wolves, cougars, or other large predators), especially in the winter months. This knowledge can be useful upon the discovery of a carcass as you can foresee the arrival of coyotes. I once photographed a family of wolves feasting on an elk kill.

Once the wolves had left the wooded area for good, I photographed the carcass knowing other scavengers would arrive shortly after. Sure enough, an adult coyote came to feed on the remains of the elk and I was able to capture some interesting images.

Coyotes are charismatic animals deserving of respect and admiration. Unfortunately, they remain an animal that is often misunderstood. They continue to be hunted, trapped, and poisoned in great numbers, despite being an important part of the ecosystem. Coyotes are essential for rodent control and the reduction of disease.

They are incredibly intelligent and adaptive animals and thankfully, despite continued persecution, they continue to thrive. To photograph them is a real privilege.