How to Photograph Urban Peregrines 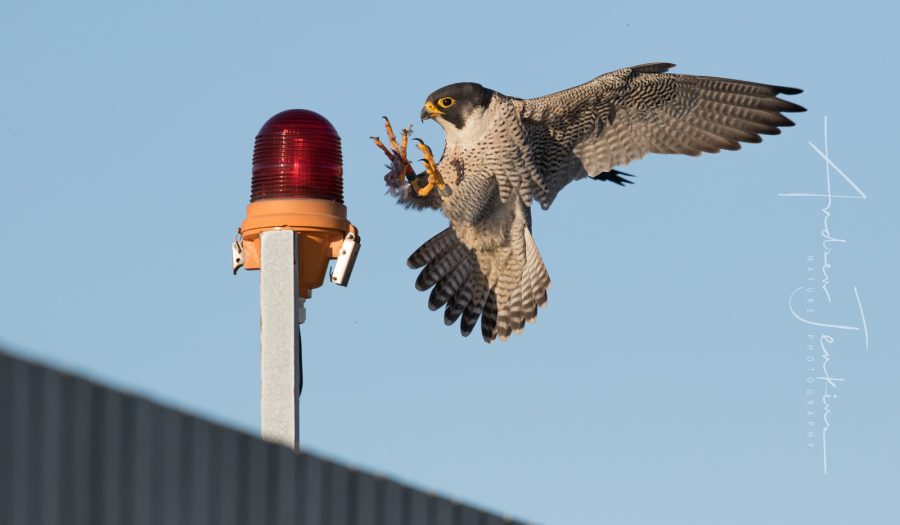 As a subject for wildlife photography, the peregrine falcon pretty much ticks all the important boxes. It is striking in appearance, dramatic in behaviour, and has a fierce, magnetic charisma that is attractive to the eye.

It is also one of the world’s most widely distributed species that, until quite recently, was the subject of intensive and highly publicised conservation work in many countries. Consequently, it is familiar and iconic to a near-global audience.

Lastly, peregrine populations are now burgeoning in big cities across North America, Europe, Asia, Africa, and Australia. This means that, for many would-be photographers, they can be found locally, without the need to spend time and money on long-distance travel before getting the images you’re after.

A possible downside of focusing on this spectacular, lens-friendly predator (that quite possibly lives on your doorstep), is the sheer number of photographers who have gone before, and the ever-growing volume of great images already in the public domain.

However, this doesn’t mean there aren’t still unique, award-winning pictures to be taken, and it shouldn’t dissuade anyone from trying to get good peregrine photographs of their own.

Peregrines in their ‘natural’ environment– sheer scarps, gorges, and inselbergs– are often difficult to get close to, tend to shrink into the scale of the landscape, and can be all but inaccessible to even the longest of lenses.

The urban environment is generally much more forgiving, with smaller surroundings, easier access, and often more habituated and approachable birds. I’ve done almost all my peregrine photography on the Cape Peninsula, South Africa, and the following observations and advice are given on the strength of this localised experience.

How to find urban peregrines

Many of my images have been captured as a by-product of scientific research on this population of falcons, conducted over the last 30 years. My fieldwork has involved regular visits to active nests and marking of individual birds, so many shots are of defensive adults around the nest, and many of the birds I’ve photographed have been colour-ringed. 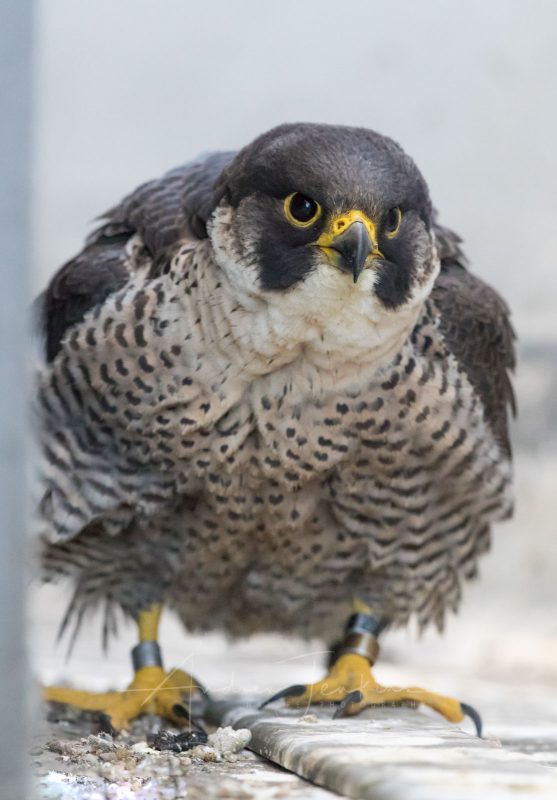 Importantly, unless you are gathering data for similar purposes, I do NOT advocate the close approach of active peregrine nests just to get photographs. Peregrines are resilient and adaptable birds, but causing breeding birds unnecessary stress simply isn’t ethical.

Besides, there are thousands of pictures of angry peregrines in circulation. Images of relaxed birds going about their daily lives are much less common and much more aesthetically pleasing.

So, assuming you are located in or close to an urban centre within the known distribution of the species, the best way to find your target animal is to start checking the upper reaches of the tallest buildings in town. 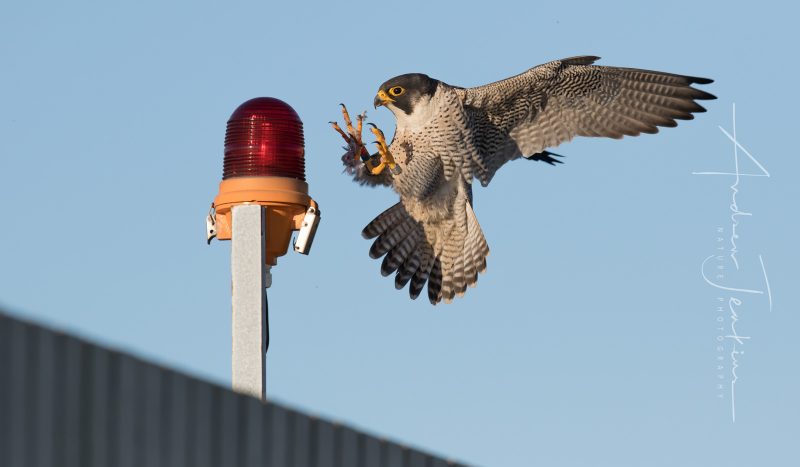 Especially check those with plenty of external structure, including ledges, mouldings, and alcoves, that provide the peregrines with horizontal surfaces on which to perch, roost, feed, and breed.

Well established territories will generally be painted with bright, white droppings that accumulate in waterfalls, sometimes several feet long, beneath the birds’ favourite places to loaf and sleep. Should you locate a building marked in this way, be patient and the falcons will appear.

An even easier way to locate the peregrine sites in your town is to find out who is monitoring them, and take it from there.

Read more: Urban Wildlife – How to Photograph Wildlife in the City

What to do next

Once you have found an occupied building, ideally one with some drama and appeal in its appearance and/or surroundings, there are two things you need to do.

Firstly, spend some time watching the falcons from below to see where on the structure they habitually operate. Secondly, gain access to the upper reaches of that building (or of one situated close by) to get you up into the world of the peregrine, and get the birds within reach of your longest lens. 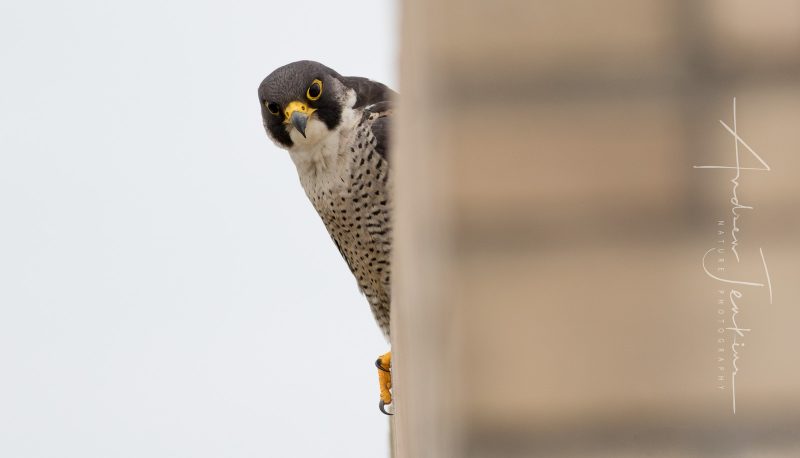 Always do the latter with permission from the building’s owner or manager, and in cooperation with anyone who might be studying the peregrine pair. Always put safety (of both the falcons and yourself) ahead of your enthusiasm to get good shots.

With this done, you need to spend time just sitting with the falcons, getting them used to your presence and establishing vantage points for photography that will give you sight of the birds behaving normally and stress-free.

This won’t always be possible, and you may need to explore more than one urban site before you find one that works for you.

When to photograph urban peregrines

The best time of year

To be sure that the peregrines at your selected site are going to be around and available for most of the time you spend on your photographic quest, I recommend that you focus your efforts during the breeding season. Wherever they are in the world, peregrines start to breed in spring, so that is when you should start increasing your time in the field. 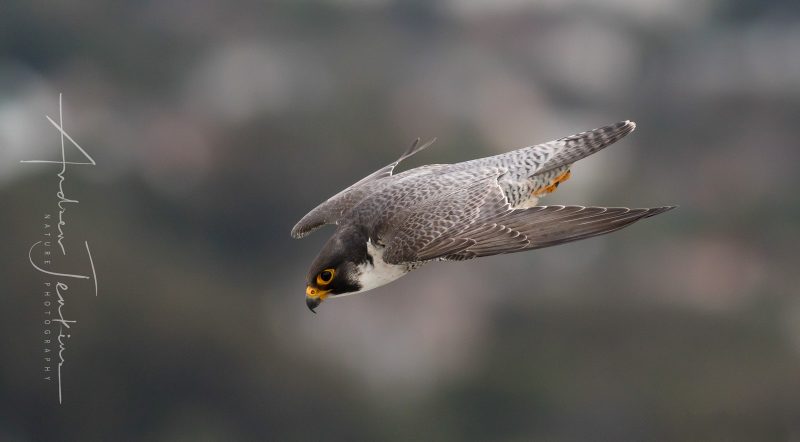 The falcon pair are likely to present great opportunities for flight, courtship, and display shots in early spring, before they lay eggs. This is also when the birds look their immaculate best: feathers perfect and richly coloured.

Once the pair has produced a clutch of eggs and begun incubation, activity drops to an annual low. It will then pick up markedly a month later as the eggs hatch, and the falcons start to hunt for and feed their nestlings.

The action rises to fever-pitch once the chicks reach five to six weeks old. At this point they are fully-feathered and start leaving the nest, so activity then drops away again as they start developing independence, ranging ever further away from their natal building. 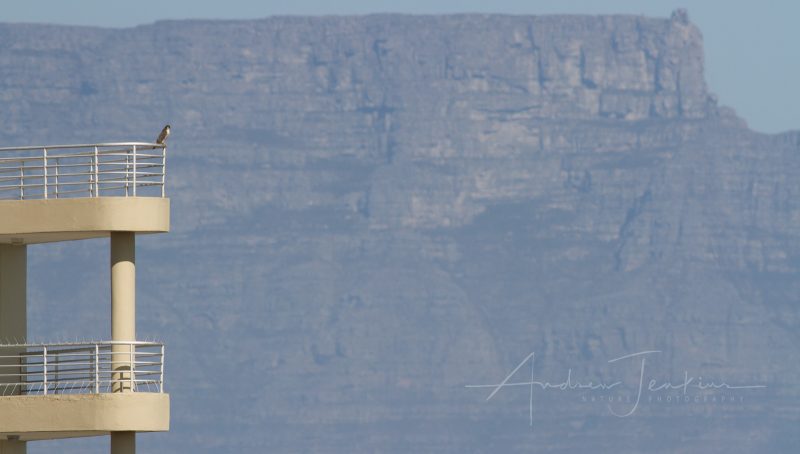 They may leave the area as many as two to three months after their first flight, depending on whether or not your peregrines are higher latitude, seasonal migrants, or lower latitude, year-round residents.

The best time of day

As a rule, peregrines are most active in the early mornings, when their staple prey (small to medium-sized birds) are most active, and the falcons themselves most hungry. It follows then that early morning is probably the best time to yield the most photographic opportunities and, in my experience, the trauma of an early start usually pays off. 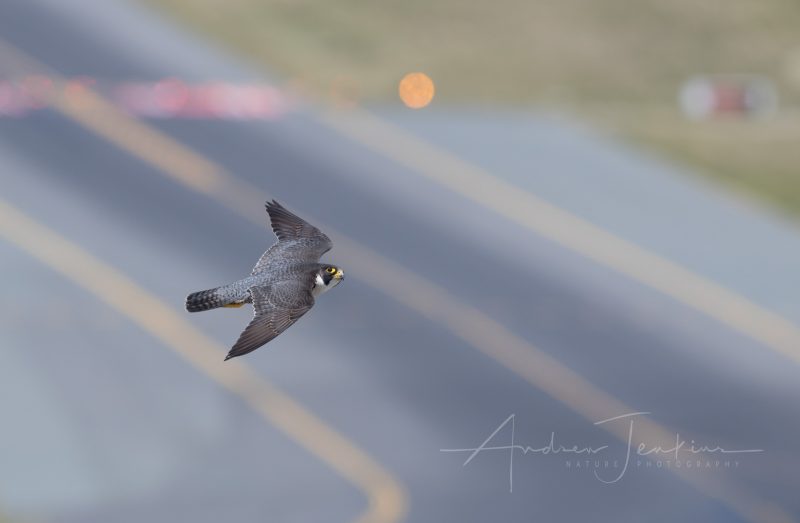 If you are keen to get flight shots, the falcons are generally most aerial when it is cool and windy, and less so under hot, still conditions. Remember that birds in general, particularly peregrines, will usually carry out aerial manoeuvres, flying into the wind to achieve maximum control.

This means that, all other things being equal, your chances of getting good flight images are highest when the sun and the source direction of the wind are in the same quadrant, and oncoming falcons are well lit by the sun.

The more time you spend with ‘your’ peregrines, the more they will start to work comfortably around your presence, and the more you will recognise their routines and behaviours. This will enable you to anticipate upcoming events, for example food deliveries, and prepare yourself accordingly. 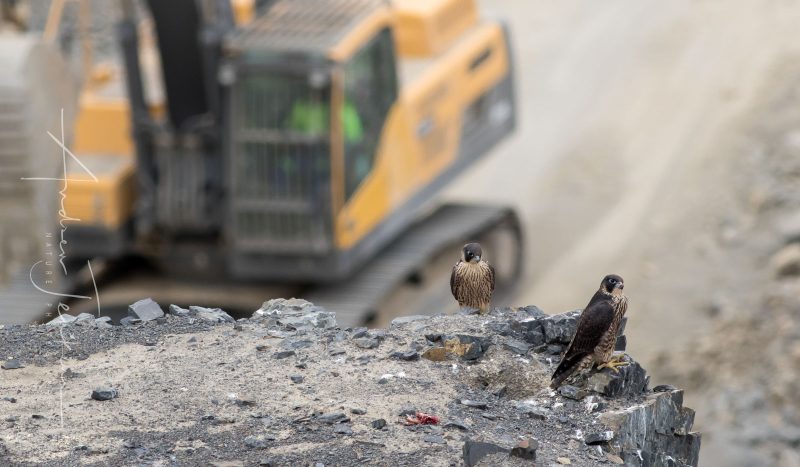 There is also a rich diversity of literature on the peregrine, including numerous books that will further assist you in understanding peregrine biology. Arguably, the best of these is Derek Ratcliffe’s The Peregrine Falcon, first published in the UK in 1980 by T & AD Poyser, and in the US by Buteo Books.

How to photograph urban peregrines safely

Peregrines are vocal, noisy birds within their nesting territories, particularly during a breeding attempt. They have a variety of calls at any given time depending on the social situation, but their alarm call is harsh, strident, and unmistakable. 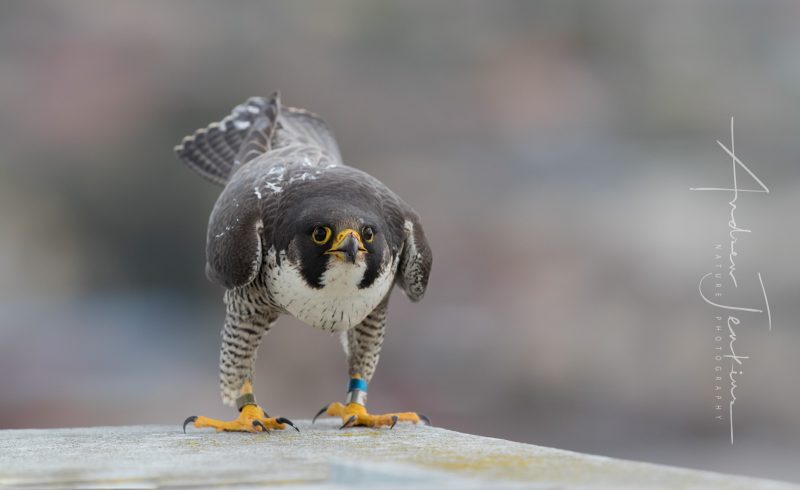 If at any time you cause stress for the falcons that you are trying to photograph, they will tell you first by ‘shouting’ at you, with the intensity of alarm calling escalating as you become more of a problem. Then, they will let you know by dive-bombing you.

Some individuals are extremely aggressive under such circumstances and will strike intruders at high speed with their substantial talons, quite easily ripping open clothing and skin. Should you experience any of the behaviours described above, you are too close and should back off immediately. 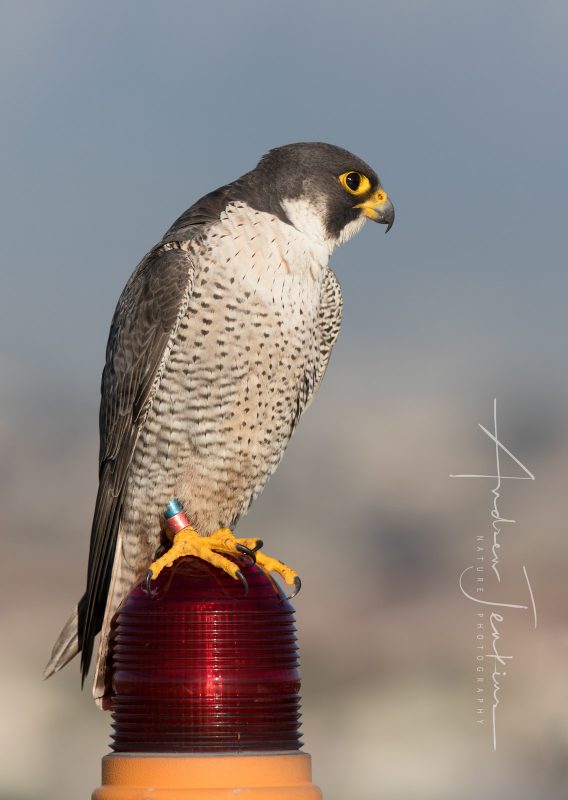 In contrast, some individuals are remarkably chilled, or at least appear to be, and will sit with one foot up, preening as you photograph them from just metres away.

Gear to use for photographing urban peregrines

When airborne, peregrines are extremely fast-moving and incredibly agile, so you will mostly be working with high shutter speeds and frame rates (and possibly struggling with ISOs too). Furthermore, they are not huge birds, so a telephoto lens is essential.

However, the biggest ‘super-telephotos’ might prove too heavy and cumbersome for practical use, even at urban sites. 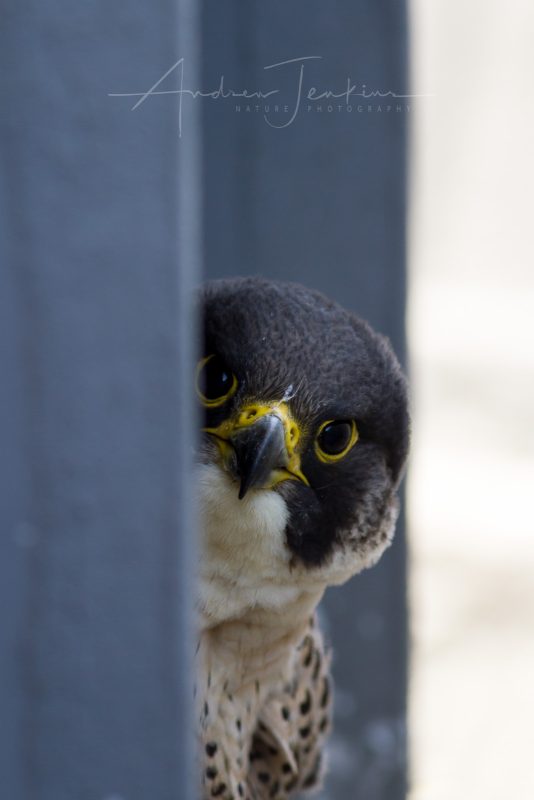 Peregrines are birds of quite predictable routines, inclined to repeatedly use the same set of two or three daytime perches and one or two overnight roosts. Therefore, there is surely opportunity to use remotely triggered cameras to good effect on this species, although I have yet to try this.

Over the many years I’ve studied peregrines, I’ve always deeply enjoyed the time I have spent trying to photograph them. This is mainly because they embody so much of what is thrilling about unfettered nature.

In his famous novel The Peregrine, J.A. Baker describes his peregrine preoccupation with such visceral intelligence, as a search for “the restless brilliance that peregrines flush from the sky”. That electric brilliance has driven my lifelong passion for peregrines, and is what I strive to capture in every image I record.

It is just as much a feature of urban falcons as it is of those living in the wilderness. In fact, with the requisite levels of skill, determination, and empathy, urban peregrines present wildlife photographers with a golden opportunity to express just how wild a modern city can be.

Best of luck on your peregrine quest – I look forward to seeing your images, either in print or posted on social media!