Urban Wildlife: How to Photograph Wildlife in the City 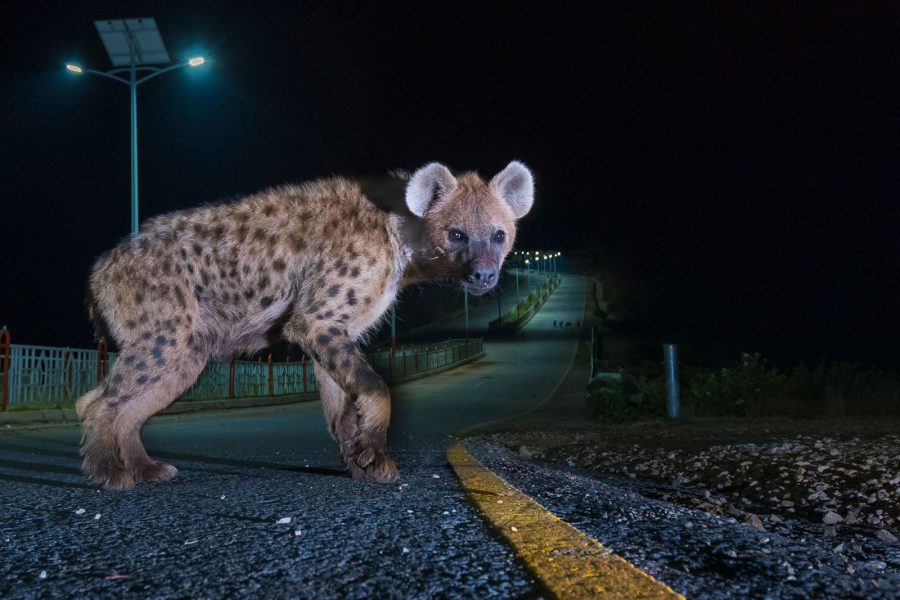 Home » Photography Tutorials » Wildlife » Urban Wildlife: How to Photograph Wildlife in the City

More people than ever before now live in urban areas; foxes, rats, and pigeons now comprise many of our wildlife encounters. Instead of jetting off to the Serengeti, why not shoot local and show off the overlooked animals in a concrete jungle?

There are obvious other perks included in this style of wildlife photography. Animals in the city are tamer than their countryside counterparts, and it’s much easier (and cheaper) to spend as much time as possible with the urban wildlife on your doorstep.

I personally seek as great of a reaction as possible from my audience, and I know that they are more excited by my photographs of the London Underground’s mice scurrying around the feet of late-night revellers than they are by indri lemurs peering through the canopies of Madagascar’s remote jungles. Indeed, it seems that photographers are starting to adopt this concept of urban wildlife photography and it often feels like a competition to see who can capture the ‘sexiest’ species in front of the most iconic urban landmarks.

How to find urban wildlife locations

Finding your subject in the city can often be surprisingly difficult. In theory, the tameness of urban animals and high numbers of them should make life easy for you, but much of their habitat is on private land, restricting your traditional fieldcraft techniques you may often employ elsewhere.

The rules of wildlife photography are different here, and you’ve got to adapt to the city. Rather fittingly with this modern style of wildlife photography, I often find a strong grasp of social media and the internet is a more important skill than relying on fieldcraft to navigate a concrete maze. Searching for relevant keywords on Instagram, Twitter, and Flickr can lead to you discovering a reliable location. I’ve found a lot of locations using this method, and have even stumbled upon a local family of urban little owls right in the heart of London.

Read more: Best Locations for Wildlife Photography in the UK

However, this approach isn’t always successful, and often you’re going to have to do the dirty work yourself. A decent ‘catch all’ is a local park or river, where most urban wildlife will often be. Winter is usually the best time to go: there are fewer people around to disturb animals, there are fewer leaves on the trees (so it’s easier to spot birds), and even the species of local waterfowl (an urban wildlife mainstay) will be heavily supplemented by winter migrants. But don’t forget to talk to the people around you; many will have visited the park daily for an enormous amount of time and will be happy to give you tip offs. I’ve pinpointed urban otters, barn owls, and even hyenas (in Ethiopia) doing just this.

What’s the best time of day to shoot?

Thinking about the time of day is especially important, and it can also affect the gear you take out with you. Sunrise and sunset can be magical in terms of light, but it’s often when wildlife is at its most active.

If you’re feeling ultra-technical, creative (and don’t have anything to wake up for the next day), then shoot at night. The crowds clear, leaving the streets laden with litter, and the largest predators in any city come out to look for something to eat. This is the best time to find and photograph leopards in Mumbai, hyenas in Harar and, of course, red foxes in London. Shooting at night can be daunting at first and the challenge of lighting your shot can deter many photographers. Remember that you’re not restricted to your own light sources in the city; lots of natural ambient light can make for plenty of opportunities to get creative, including using silhouettes or bokehs.

If you’re up to the challenge of using your own light, Nature TTL has some great articles on using flash on wildlife:

Using flash on urban wildlife at night also often goes hand-in-hand with wide-angle remote photography. Animals in the city are accustomed to new objects appearing and disappearing, so will often happily approach a remotely-triggered camera, allowing for some fantastic and intimate shots. 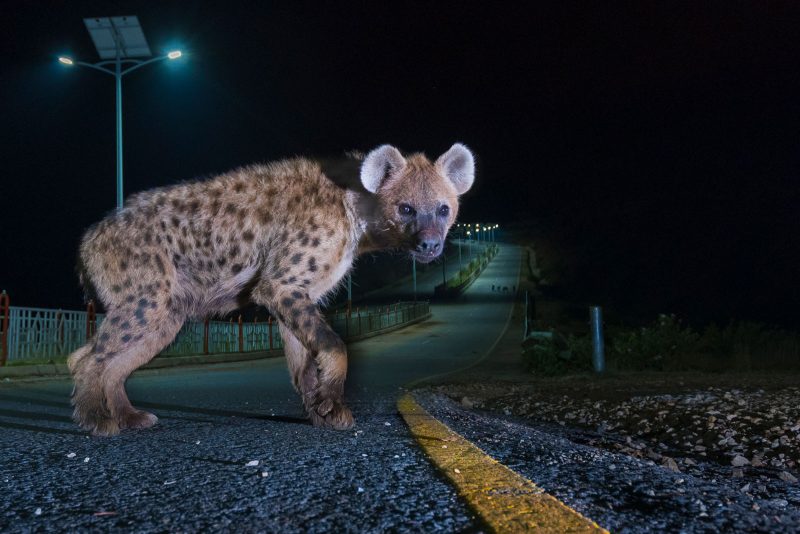 Be creative with your photos

Urban wildlife photography is a great opportunity to explore your creativity. The lights and structures of the city, combined with the possibilities of getting close to wildlife, can provide the perfect formula for generating some beautiful and original shots. Animals in the city have also had to find novel solutions to living in such an alien landscape, which can lead to some interesting behaviour.

Let’s take the deer rut in Richmond Park (London) as an example. If this was in the New Forest, you would find it difficult to move away from classical photographs that have been taken and published a thousand times before. However, in Richmond Park, deer can tolerate a rugby match in the immediate background, silhouetted against the juxtaposition of distant lights from Canary Wharf, or even captured close up using a wide-angle lens and remote trigger. These are all shots that the vast majority of your audience would find infinitely more interesting. 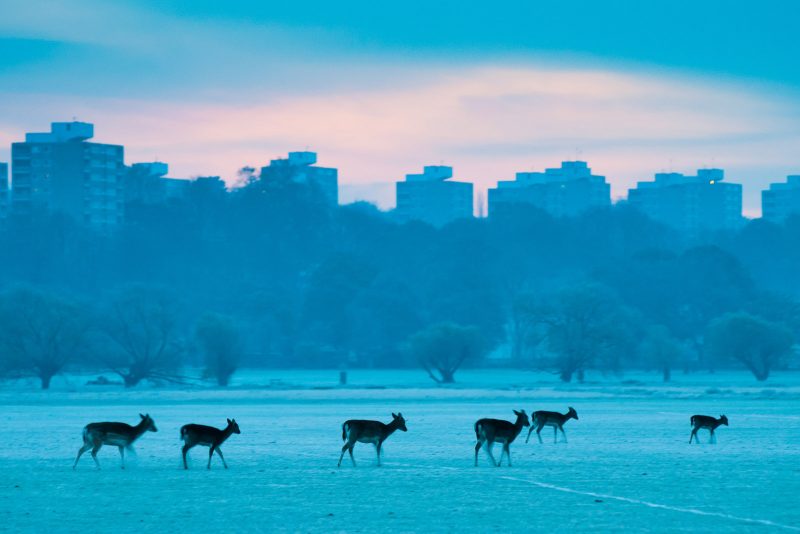 Working alongside people in the city

One necessary evil of urban wildlife photography is spending time in the place that many of us seek to get away from. I remember spending a very awkward hour a few years ago, where I was photographing the beautiful, seldom-seen waxwings on a high street, when hundreds of football fans were rushing past me walking home from a game. That didn’t sit well with the flock of waxwings or my sprawling tripod taking up half the pavement! I was surprised that I wasn’t stopped by anyone that day asking what I was doing. Whilst this isn’t usually a problem, it can become tiresome if you’re constantly being bothered.

You have to be careful if you want to incorporate people into your photos, too. It’s perfectly legal (in the UK, at least) to commercialise photos with people in the shot taken in public spaces, provided they “do not dominate” the photo or they don’t deem you to be harassing them. Despite these laws in my favour, I always ask the person in my shot for their permission if they are clearly identifiable in my photo. But if you’re looking for something more candid, then sometimes that isn’t ideal.

Even whilst sat writing this article at a kitchen table in the afternoon in suburban London, I’ve had my urban wildlife photography juices flowing. I’ve noticed a fox slink across the decking at the back of the garden, and I spied the figure of a cormorant through my window flying in the direction of the River Thames.

Thoughts of projects involving a new ‘urban fox’, or ‘framing urban wildlife using windows’ have been racing around the back of my head. I’ve certainly caught the urban wildlife photography bug, and hope that you feel inspired too.

Have you been taking urban wildlife photos? Share them with us in the comments!