Urban Wildlife: How to Find and Photograph City Foxes 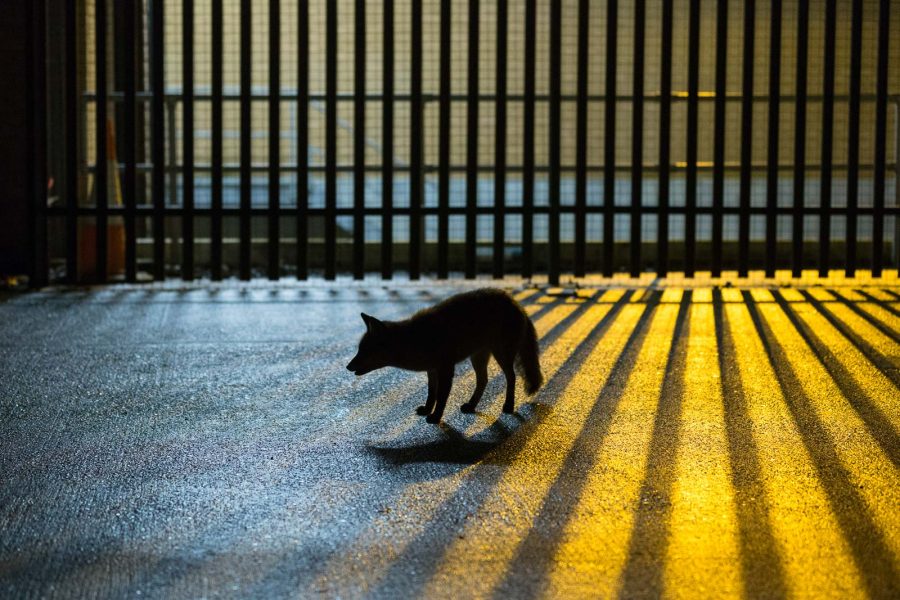 The red fox (Vulpes vulpes) is a very recognisable mammal worldwide, and one that undoubtedly receives some of the most controversial press in the UK. That being said, delve a little deeper and you will soon come to realise that this urban fox is far from the ‘pest’ that it is so often portrayed as being. In fact, it’s one of the most impressive and fascinating carnivores, and possibly an urban icon to some people too.

Since picking up a camera for the first time in 2010, I have greatly enjoyed the challenging prospect of photographing foxes in the UK, amid both rural and urbanised locations. Throughout this article I aim to share my top tips and advice I’ve learnt along the way to successfully photograph urban foxes.

I am a strong believer that to successfully capture the true essence of an animal through still photography, you must first learn your chosen species’ habits and behaviours – this doesn’t have to be as complicated as it sounds. For example, understanding a foxes movements within its territory will vastly improve your photographic opportunities, and guide you on a path to building a successful portfolio of images.

Most fox activity will occur during the hours of darkness, so this is worth bearing in mind – it’s very unlikely that you’ll be able to photograph them during the day unless you visit quiet, secluded locations within the city (more on that later).

Although active all year round, certain seasonal behavioural changes present better opportunities than others for observations and photography, for example throughout most of December foxes will become extremely vocal due to the approaching breeding season (January), and this can help you to map where foxes are present in their urban surroundings. With that in mind, here is a brief month-to-month description to help you understand what you can expect over the different months of the year.

How to Find Urban Foxes

Although some individuals can show immense boldness, most foxes will be extremely secretive and sometimes equally as nervous as their rural cousins, therefore careful thought and planning helps in securing a successful location. A little common sense comes into action here, but as a general rule when searching for new locations I always aim to scout the ‘greener’ and ‘quieter’ areas of the city. For example, there is little point in focusing your efforts trying to photograph foxes in large housing estates, where constant streams of activity from pedestrians and traffic (even into the early hours) can present a problem. Below are just a few examples of locations where I often look for foxes, both during the day and night.

Although it may not seem apparent at first, suburban cemeteries are a real haven for urban wildlife, providing a safe and quiet retreat to rest during daylight hours. I’ve often managed to observe deer, badgers, owls and, of course, foxes from such locations. It goes without saying that great respect must be shown when working in cemeteries. 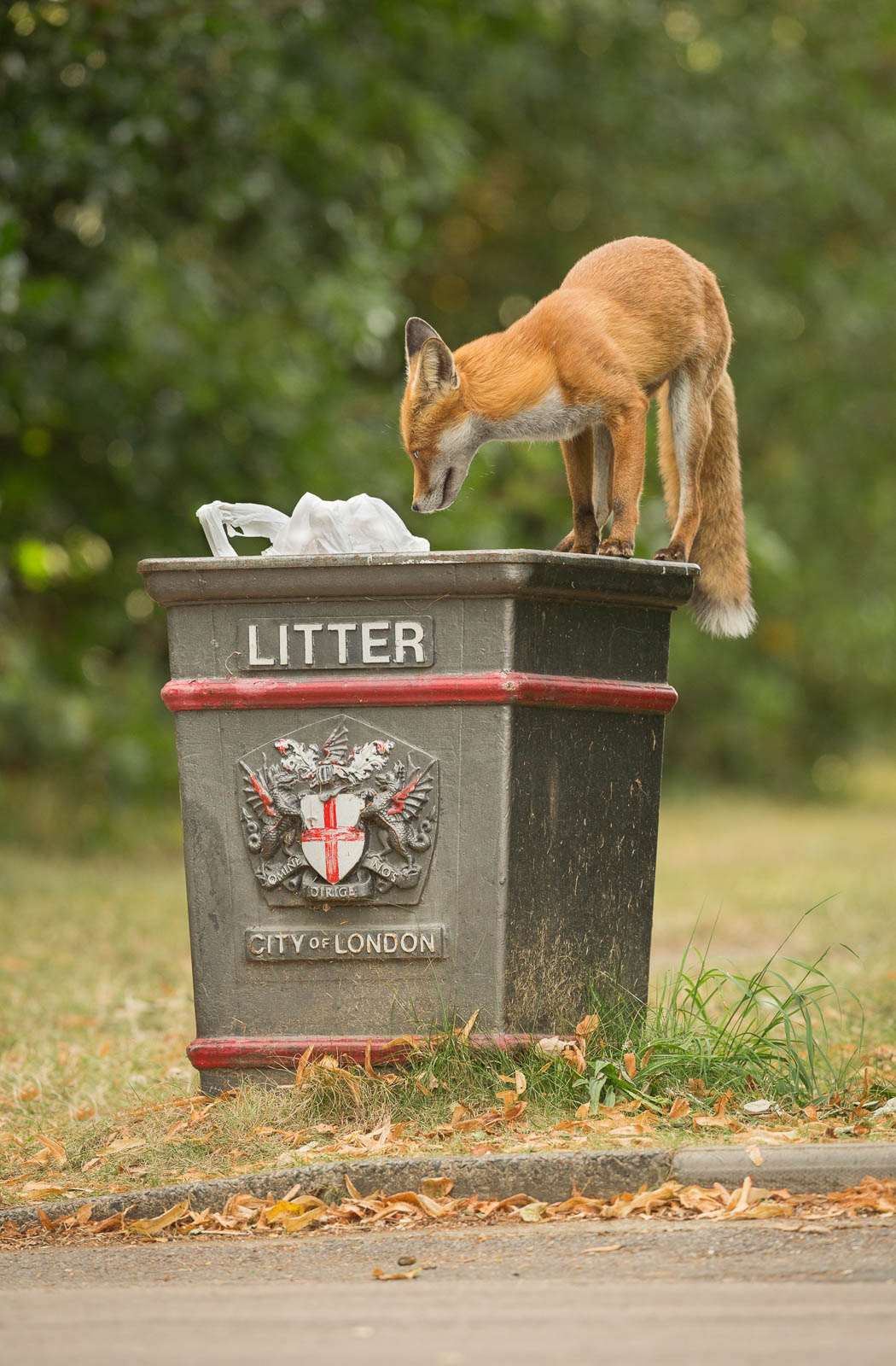 In the day, community parks are often busy with families, however if you know where to look you can still observe wildlife such as foxes. Often working in cities such as London, I will see foxes breaking cover during daylight hours to forage in litter bins in the hope of an easy meal. The true magic, however, usually occurs shortly after dusk when foxes emerge from hiding ready for a busy night foraging on the streets, but parks provide a great opportunity in the meantime. 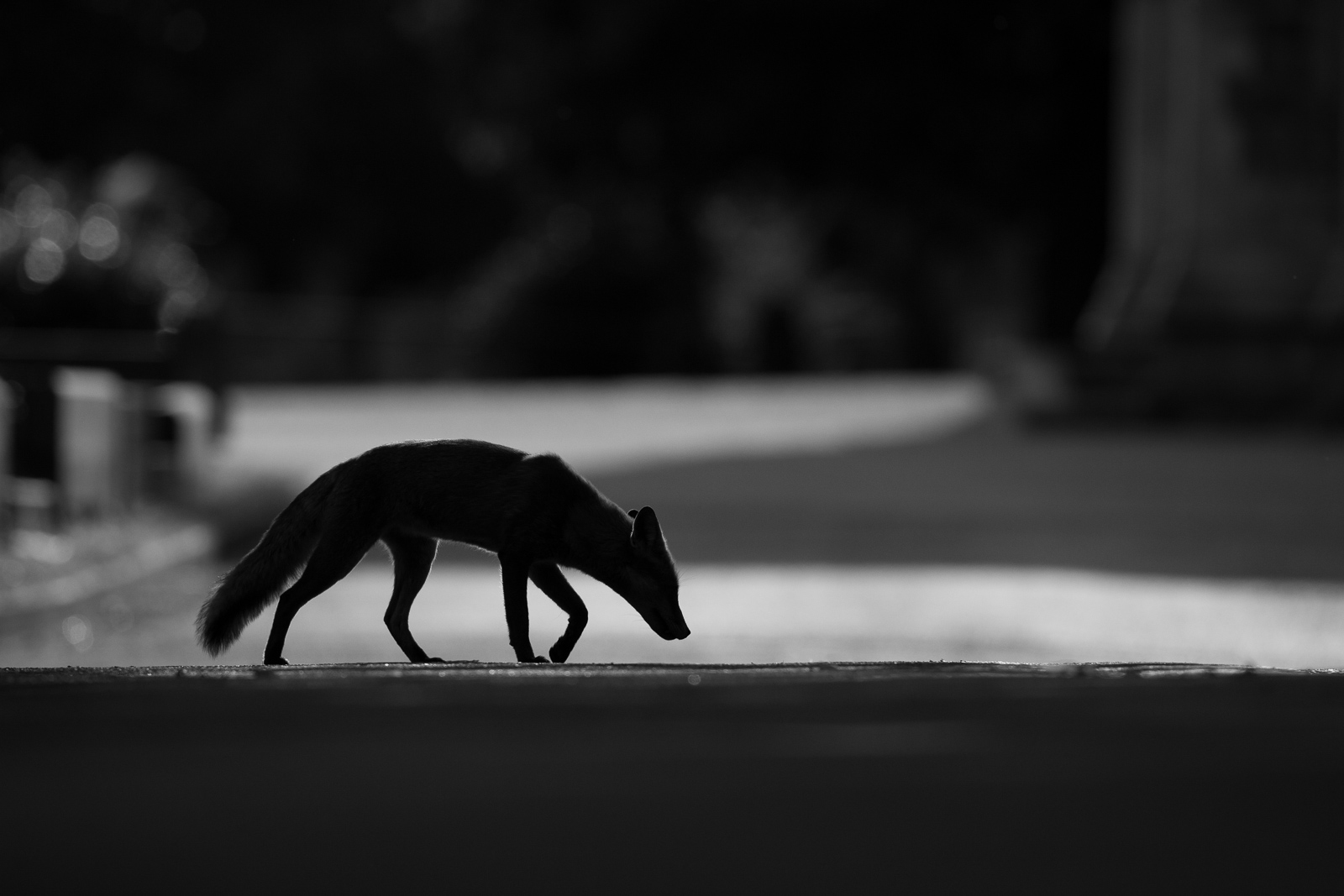 By far the most ‘urbanised’ of the three locations, industrial estates are ideal locations for urban foxes. Often littered with fast food packaging and waste, they provide fantastic foraging for opportunistic foxes during the early hours.

How To Photograph Urban Foxes

With peak times being at night, I am going to share my tips and advice for this often challenging time of day. It goes without question that a different approach will be required than for daytime shooting; more often than not high ISOs and slow shutter speeds are necessary due to the limited light available – usually just that from streetlights. It’s challenging, but certainly not impossible.

When photographing foxes at night, I like to work with fairly high ISO speeds for maximum light sensitivity, typically with anything between 1000 to 6400. I consider this a ‘cut-off-point’ for noise performance on my camera. Of course, each camera deals with noise differently, therefore I recommend you test this beforehand on your own camera. 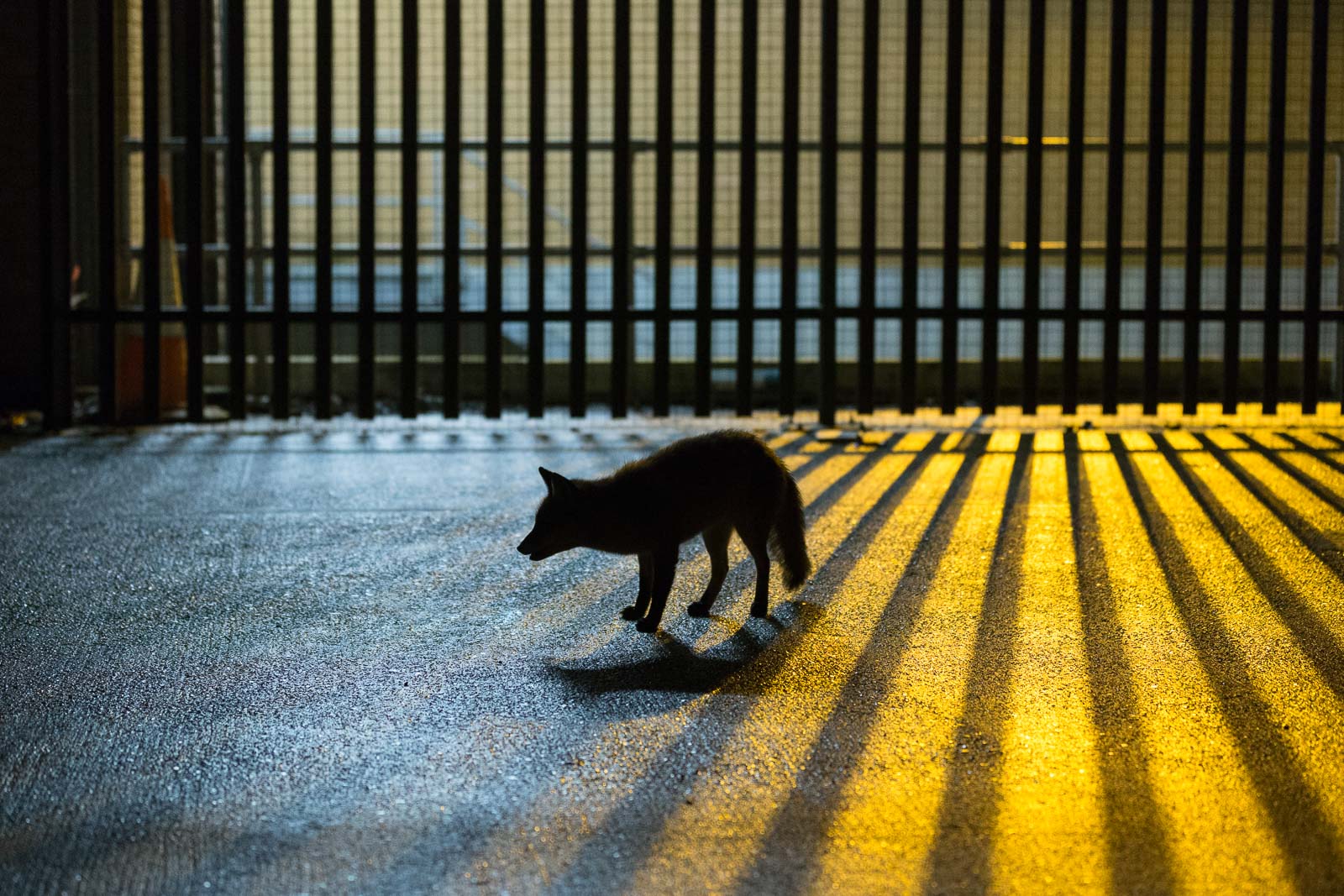 To maximise light intake, I compensate this with the largest aperture my lens of choice allows – this is usually a 70-200mm f/2.8 shot wide-open. A lens of this aperture really does help in low light situations, but even so I usually only expect to see shutter speeds of 1/15th – 1/60th, which is enough to freeze a stationary fox.

The most essential item in my opinion, however, is to have a vehicle of some description. This in itself provides a fantastic mobile hide in which I can comfortably (and safely) work from. Regularly working from the car, I find bean bags an invaluable accessory in which I rest upon the car window frame, providing a solid support for my camera to rest on.

A more advanced (and not to mention costly) approach is to light the image with off-camera flash. Unfortunately, the built-in flash on your camera won’t be much use here, due to the harsh unbalanced directional light it creates (even with use of diffusers), therefore for optimal quality using one or more off-camera flashes is essential. Why more than one? Well, the first is effectively being used as the ‘main’ light source, whereas the second acts as a fill light for the shadows.

Top of the range flashes don’t come cheap, but there are a range of fantastic brands out there creating some fairly good ‘copies’ of leading brand products. One such brand is called Yongnuo, which offers flashes for all budgets – my favourite being the YN600 EX-RT.

Secondly, when working off-camera you will need a means of firing the flashes. Thankfully there are a whole wealth of wireless flash triggers available on the market. There are options made by Yongnuo for both Canon and Nikon, as well as those by Neewer and Hähnel. 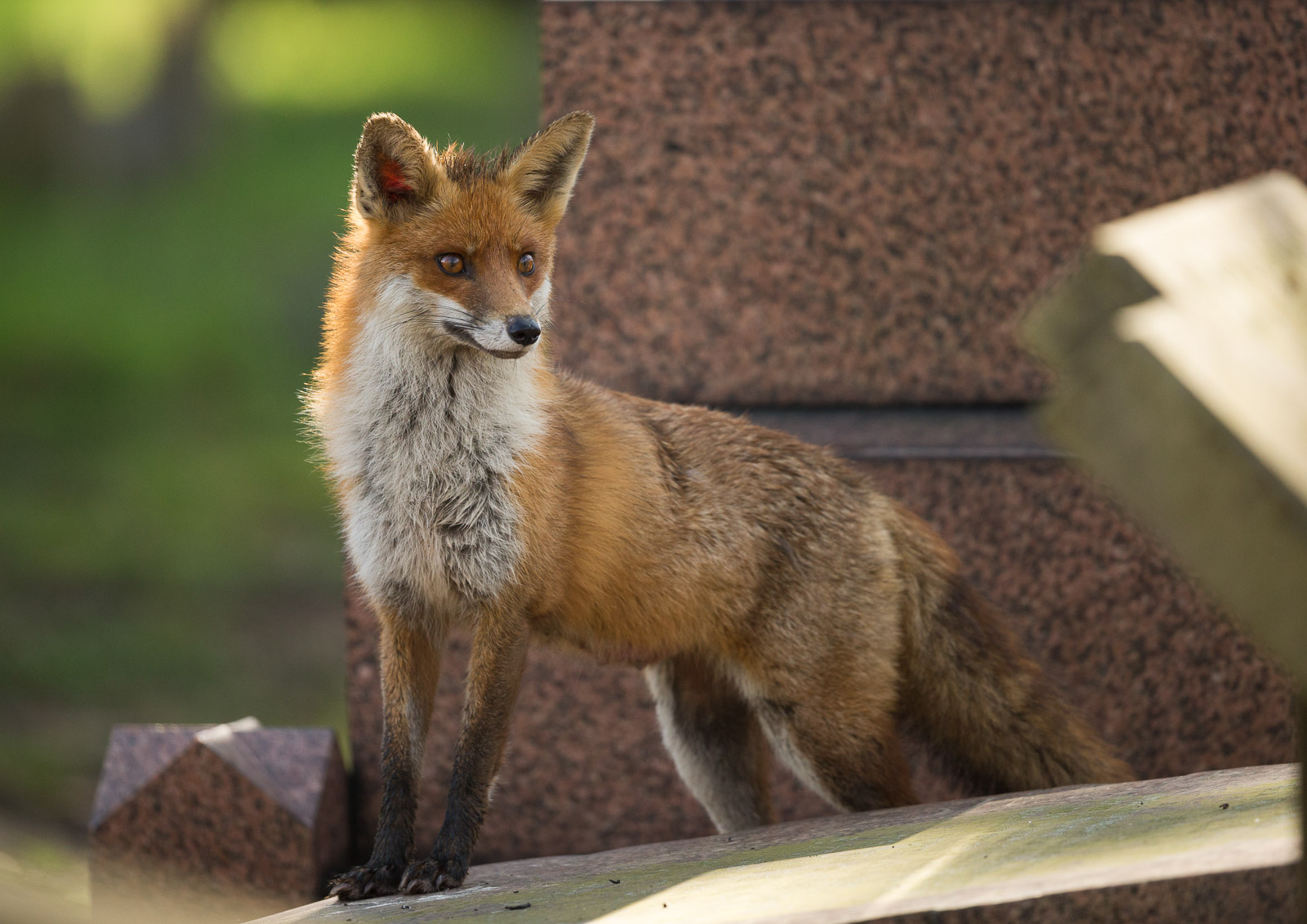 How do you know how to compose the image? Well, this is where a decent understanding of a fox’s behaviour and habits come into practice. For example, you may notice a fox has a favoured trail (even in urban areas foxes stick to well used paths and trails), or perhaps it approaches under or through a particular fence panel. Knowledge such as this can go a long way in knowing where to position your camera for such set-ups.

If done ethically, and with the right food, you could alternatively try baiting a particular spot. This can be a questionable approach, and there is no right or wrong answer here, but if done in small quantities I personally see no harm – after all, urban foxes will scavenge for household waste regardless of whether or not you are providing it directly. Both methods still require a basic understanding of the fox’s habits nonetheless.

Lighting the Scene with Flash

I won’t go into too much detail here, as a whole book could easily be written on such a topic, but 99% of the time I go for a straight forward approach with flash. I position a single flash each side of the camera (therefore 2 flashes in total), positioned at an angle of 45-degrees from the camera’s plane of focus – this will render a nice, evenly lit scene. 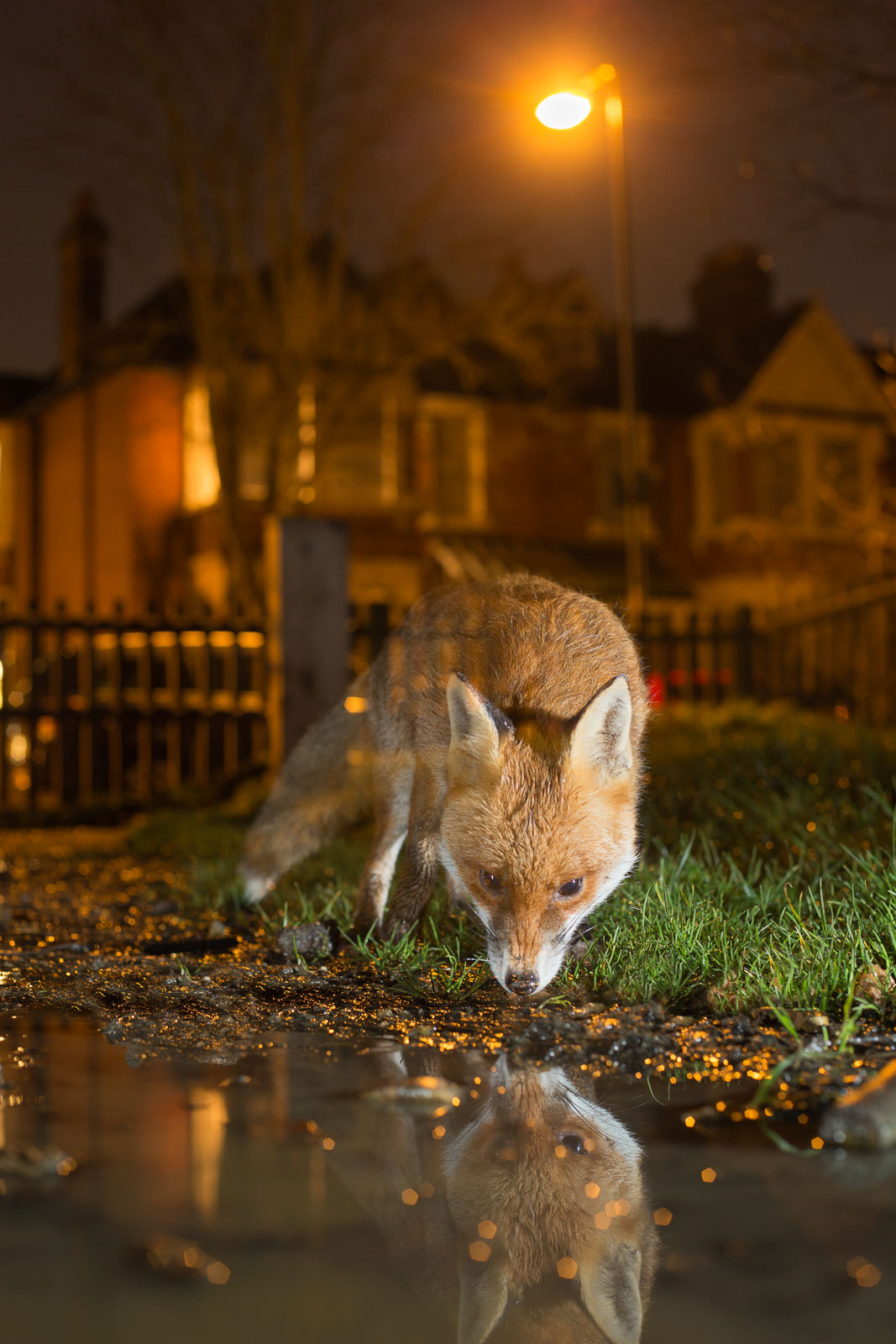 This technique can be used regardless of focal lengths, whether that be telephoto or wide-angle, which too can be used to great effect in capturing a fox amongst its urban surroundings.

Further Reading: “A Guide to Using Flash with Wildlife“ and “Does Flash Photography Really Harm Animals? A Look at the Science“.

Even when taking all of the above into account, the most important aspect to remember is, of course, practice and patience. To put it into perspective, I may head out to observe foxes a hand full of times before even attempting to create images; each time, however, gaining valuable knowledge for photography.