How to Photograph Sharks 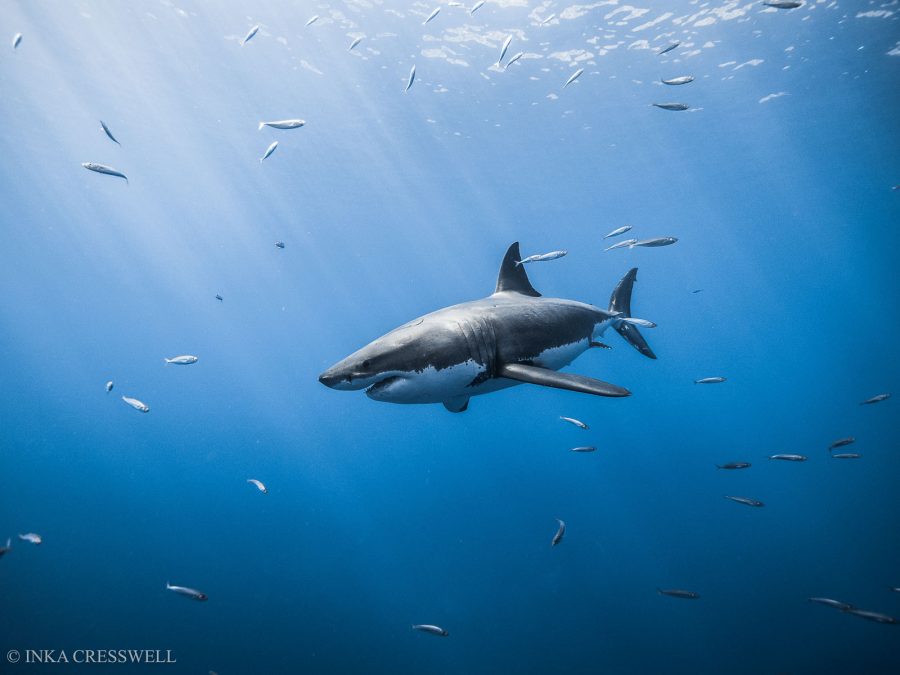 Hanging in open blue water, too deep to see the bottom and 30ft from the surface, whilst being circled by sharks is what many people consider to be a nightmare situation. But, for me, this is a dream; an opportunity to observe one of our most well-adapted and beautiful apex predators in their natural environment and capture their grace on camera.

Whether you love them like me, or are terrified of them after watching Jaws, a few too many times there’s one thing we can’t deny: sharks fascinate us. As a society, we are obsessed with these charismatic ocean inhabitants. As a photographer, I work to share a different perspective on these often misunderstood apex predators. 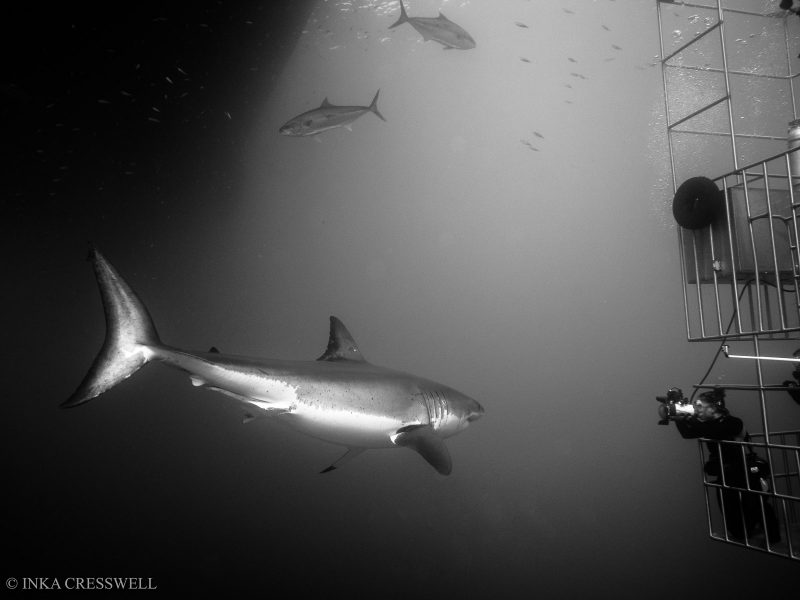 Big sharks and where to find them

With many shark populations declining globally, photographing sharks is becoming a much more tricky task than you may expect. Coral reefs and ocean pinnacles that were once frequented by sharks are empty. The few sharks that are left are far more shy than the boisterous monsters media often makes them out to be, but luckily there are still a few strongholds that create the perfect opportunities to photograph sharks in their natural habitats. 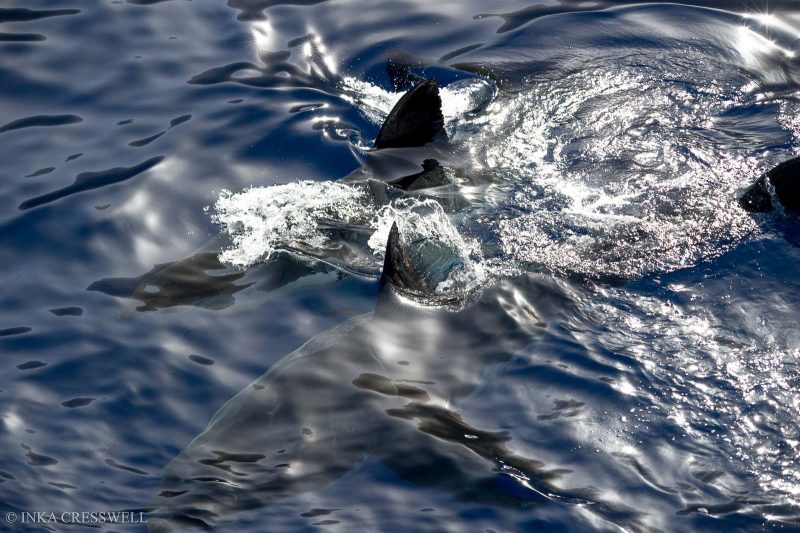 The most admired and feared shark of all, the great white shark, ranks high on many nature photographers’ bucket lists. In my opinion, Guadalupe is by far one of the best locations to photograph these magnificent sharks.

Unlike the waters off South Africa, Guadalupe boasts crystal clear water that many photographers refer to as having a gin-like quality. The incredible visibility allows you the rare opportunity to take detailed wide-angle photos of these sharks. This is simply not possible at other great white hotspots.

The incredible abundance of sharks in this region also means that photos with multiple sharks in one shot are also not out of the realms of possibility, as they migrate to this region in incredible numbers. 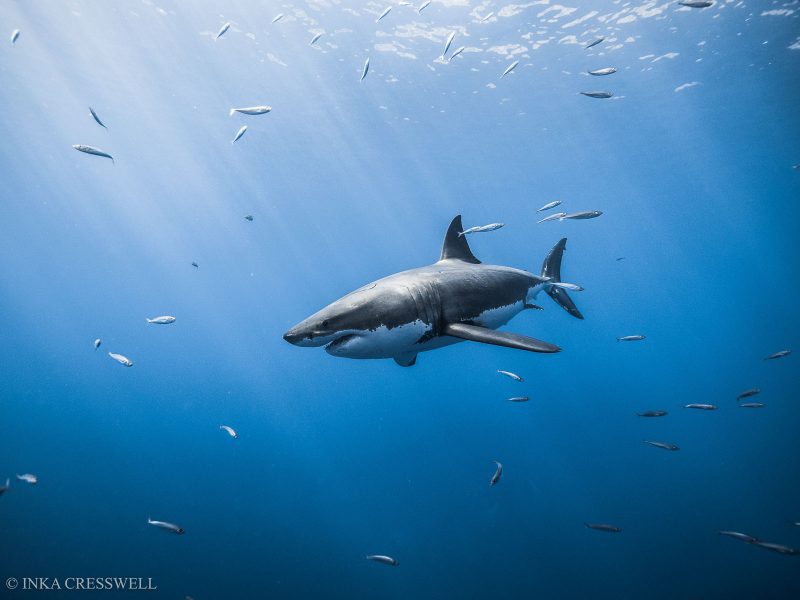 Another species you will find high on any diver’s bucket list is, of course, the graceful whale shark. These ocean giants are filter feeders posing no risk to people.

While they are incredibly widespread, finding these sharks reliably in blue water can be a challenge. Due to their incredible size, whale sharks must filter feed enormous amounts of plankton. As a result, they are usually found in clouded, murky water.

There are a few locations where these stunning sharks can be seen in blue water: Ningaloo Reef in Western Australia, The Philippines, and The Maldives to name but a few. Often, when in clearwater, these sharks are on the move – making them difficult to photograph. Plenty of challenges, but when the stars align the results are incredible.

If you are looking for a more stationary subject, the plankton filled waters of La Paz are an excellent alternative. Juvenile whale sharks migrate to these waters and can be found vertically feeding in great numbers throughout whale shark season. 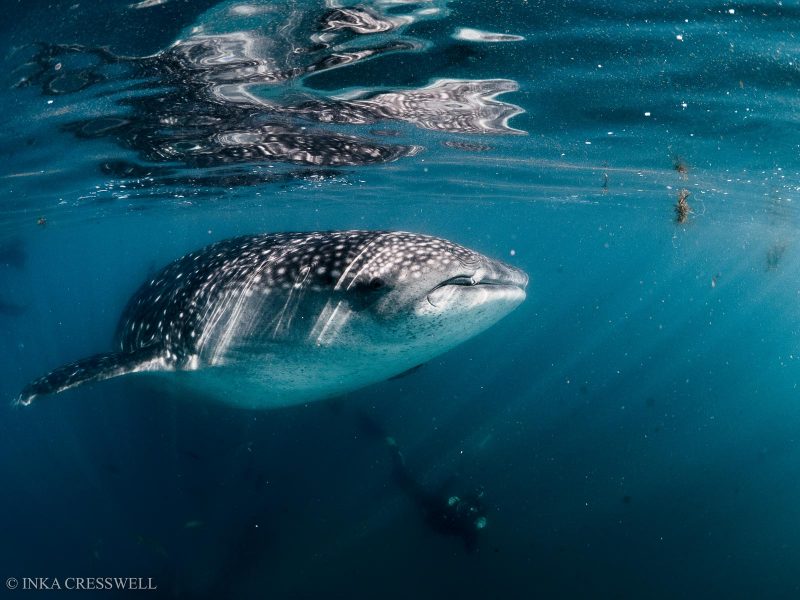 Another iconic species many photographers dream of encountering is the hammerhead shark. From December to April, the elusive great hammerhead shark can be found off the coast of Bimini, Bahamas. 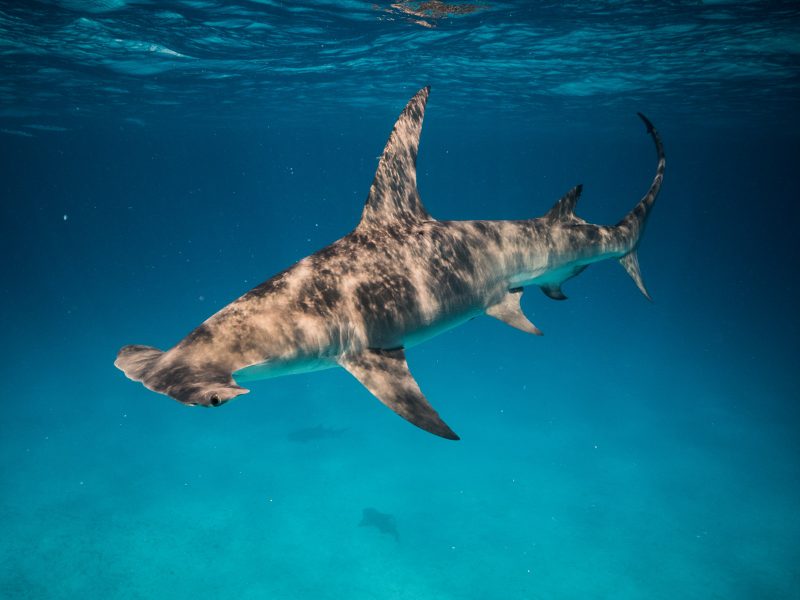 These shallow waters are ideal for free divers and SCUBA divers. The waters are shared by a host of other iconic marine life, from playful spotted Atlantic dolphins, to curious nurse sharks and amazing schools of eagle rays. 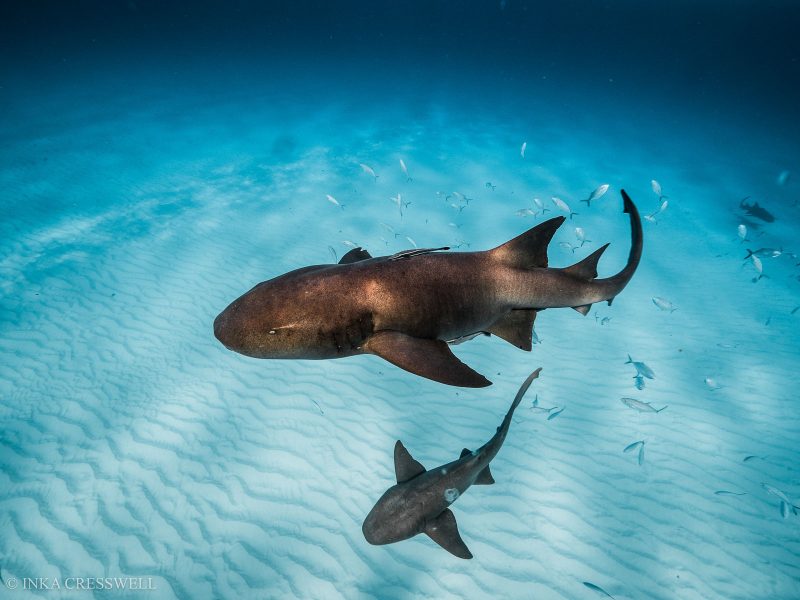 Bimini is a true underwater photographer’s paradise. Shark tourism is well established in this area, so despite their elusive nature it’s possible to have close encounters with great hammerhead sharks and the 20+ metre visibility means there are endless photo opportunities.

When photographing megafauna such sharks, a good wide-angle lens is essential. I use the Panasonic Lumix G Vario 7-14mm f4.0 MFT with a Lumix GH4 in a Nauticam NA-GH4 Housing. Paired with a wide-angle glass dome port, I have been able to capture sharks ranging in size from small reef sharks, to the world’s largest shark species (the whale shark). 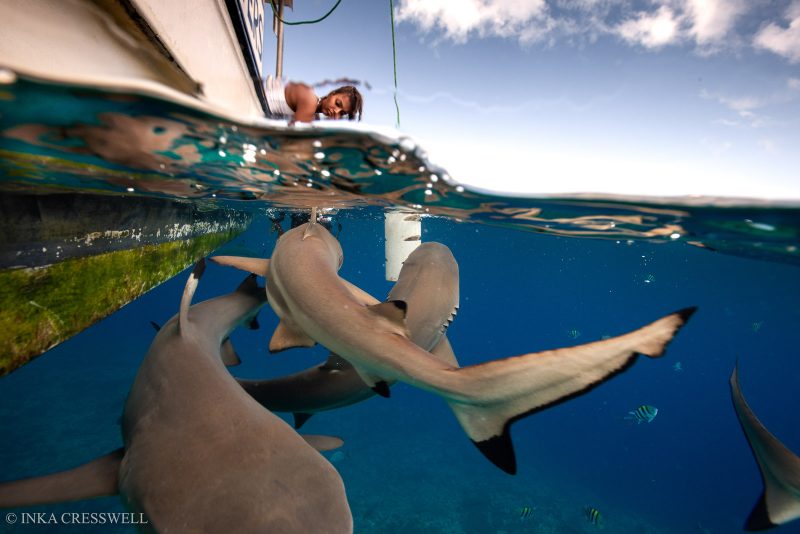 Another great option for photographing sharks is a pole cam. By rigging the housing onto a pole with a remote trigger, it’s possible to get some great split shots and achieve a level of proximity not possible when directly holding the camera. This is especially effective with smaller sharks that may shy away from a person in the water, allowing you to achieve a more personal view of these timid sharks.

Like any area of wildlife photography, negative space can add a new dimension to photography. When addressing a subject like sharks that are surrounded by so much misconception, there is often a specific narrative I want to carry across in my imagery. 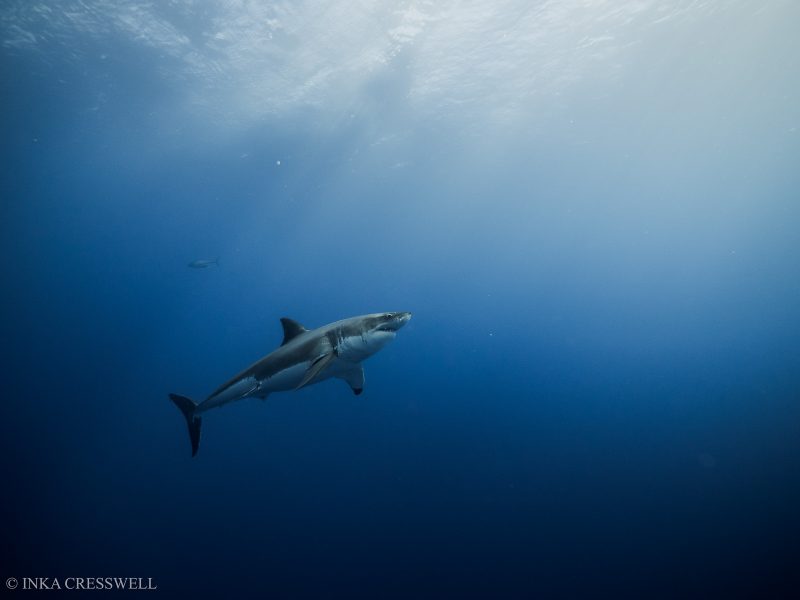 To ensure each image tells a story, I try to think about how I can use the elements around the shark to add a new perspective. For example, I might choose to focus on the pilot fish that swims ahead of the great white shark, only a few inches from their rows of teeth. Or, I might try framing the image to make the shark look small in a vast ocean, emphasising their fragility.

While the iconic photos of sharks with their mouths agape are often a big hit on social media, I try to challenge myself to not always go for the obvious shot. One of my favourite great white shark images is actually of the shark bowing down to take a deep dive. Whilst this image is almost unrecognisable as a great white shark, I felt it showed a vulnerable side to these species we often don’t get to see. 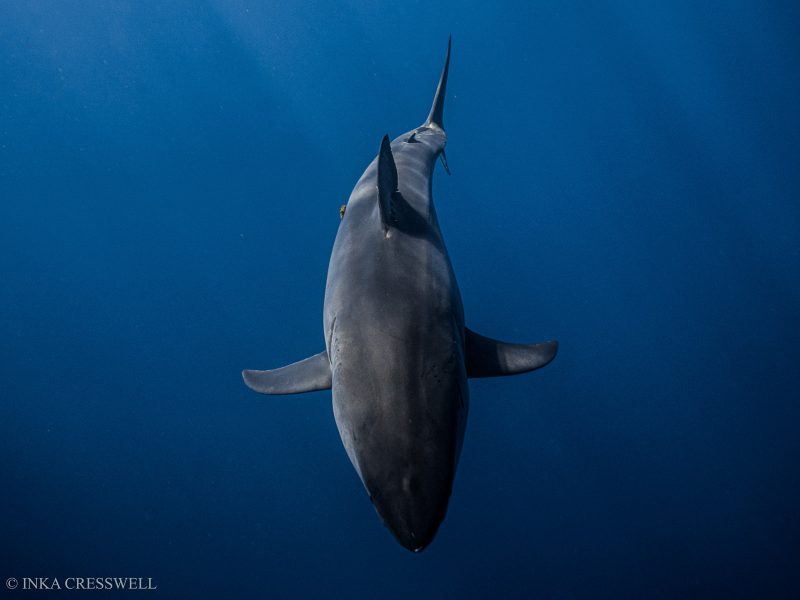 When working with large predators in remote locations, it’s incredibly important that we as photographers have respect for the species we are working with. While I adore sharks, it’s essential to always be aware of the potential risks and plan accordingly.

Diving with reputable companies and dive guides that have an extensive knowledge of the area and species is a great place to start. Make sure that you are always making safety the highest priority; no shot is worth you or your dive buddy being injured. Not only that, but a negative interaction with one of these species could not only result in a life-changing injury, but can also be the catalyst for a storm of negative press – hampering the efforts of scientists and conservationists working desperately to increase protections for these vulnerable and essential species. 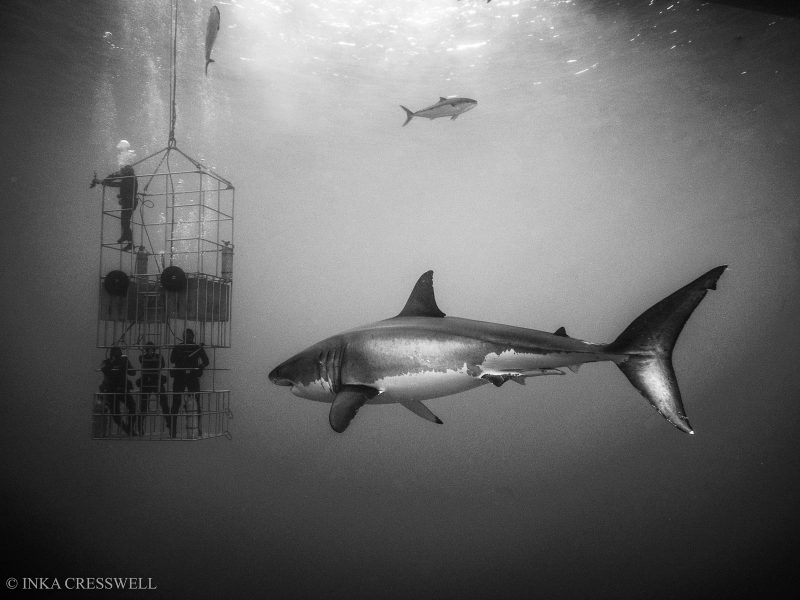 When working with sharks, I am also very cautious and aware of how my presence can impact their natural behaviour. For the best encounters, you should never chase the shark but instead move slowly with awareness of your surroundings and wait for them to come to you.

I believe every interaction should have a mutual level of respect. If you enter the water and they immediately swim away, then wait; their natural curiosity will often bring them back, and if not it wasn’t meant to be. 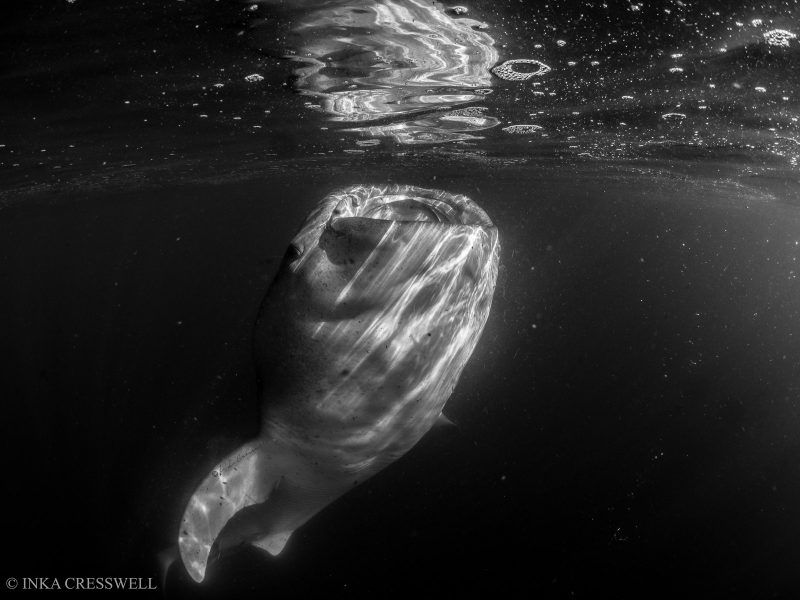 I am also an advocate for not touching the marine life we interact with. While touching marine life can be essential for marine research, as a photographer or recreational diver it’s important that we respect their space.

The same goes for the marine environment we are working in. As a photographer, you should maintain neutral buoyancy and never stand or hold onto the coral reef as this could damage the fragile environment and cause irreversible damage.

Dive in and become a shark advocate

Working with big sharks in the water is an incredibly humbling experience. There are few species on Earth as perfectly adapted to their environment as sharks. By engaging in shark tourism activities, we can prove that these sharks are of greater economic value alive than they are dead. This ensures that they can continue to provide essential ecosystem services and providing support for local communities and research organisations. 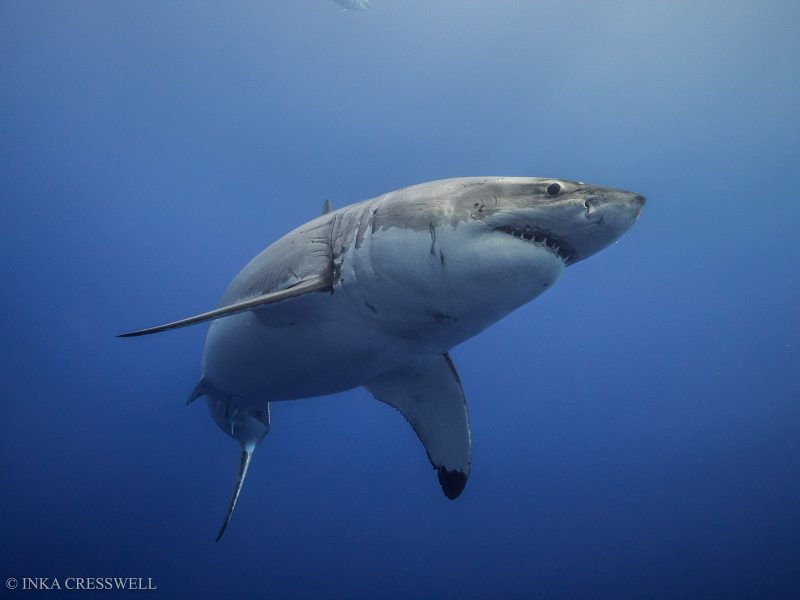 Through photography, we have a unique opportunity to share the lives of these misunderstood species and inspire a new generation of shark advocates. I hope that, when photographing your sharks, you can marvel in their beauty and grace as I have on countless occasions and see them as the vulnerable species they are.

I hope your photos won’t only capture the beauty of these mysterious animals, but also teach people about their true natures – educating and inspiring a new generation of ocean advocates so we can have shark-filled seas for generations to come.