How to Photograph Woodland Birds 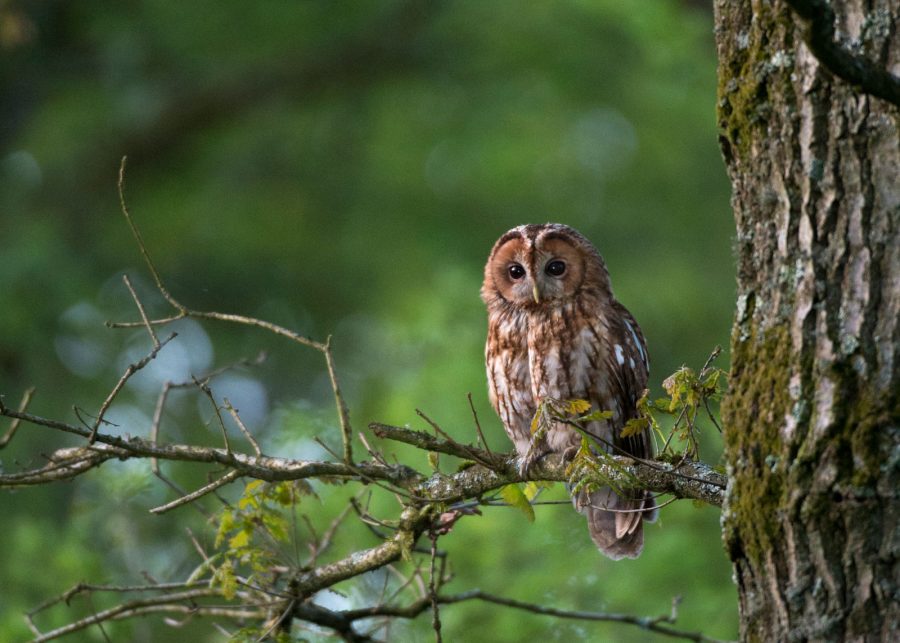 Most bird photographers are already pretty good at photographing woodland birds, whether they know it or not. Garden birds are, in effect, woodland birds or woodland edge birds. No bird species has evolved around the habitat of gardens, as they are so modern in evolutionary history.

However, gardens in general (some more than others) are areas of short turf, hopefully some hedging, and some trees or shrubs. To all intents and purposes, this mimics a woodland clearing. 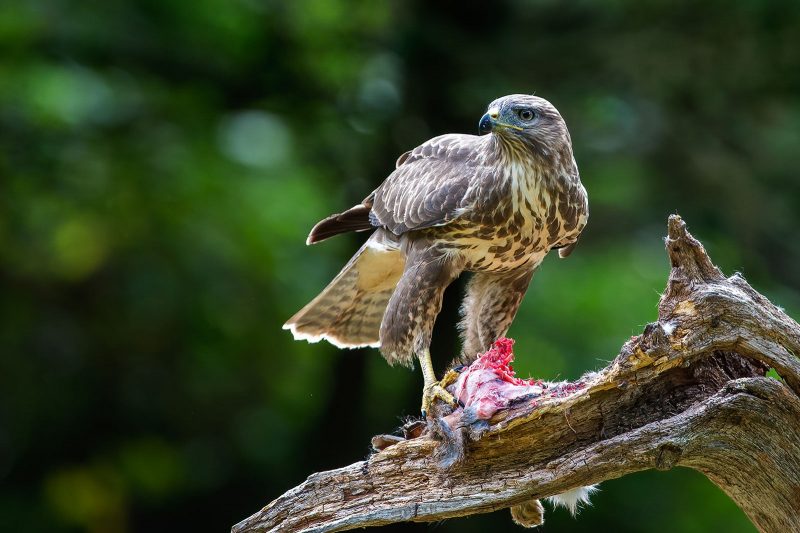 So with that in mind, most wildlife photographers are probably familiar with the bait-and-perch technique in their gardens, and probably learnt a huge amount from this. Therefore, I wish to focus on other techniques to photograph woodland birds, potentially showing different behaviours and more elusive species.

Firstly, an important skill to learn is how to observe woodland bird behaviour. Initially, when people walk through woodland, they often do not see very much. They make too much noise, go too quickly, and any self-respecting wild animal is long gone before most people can enjoy it. 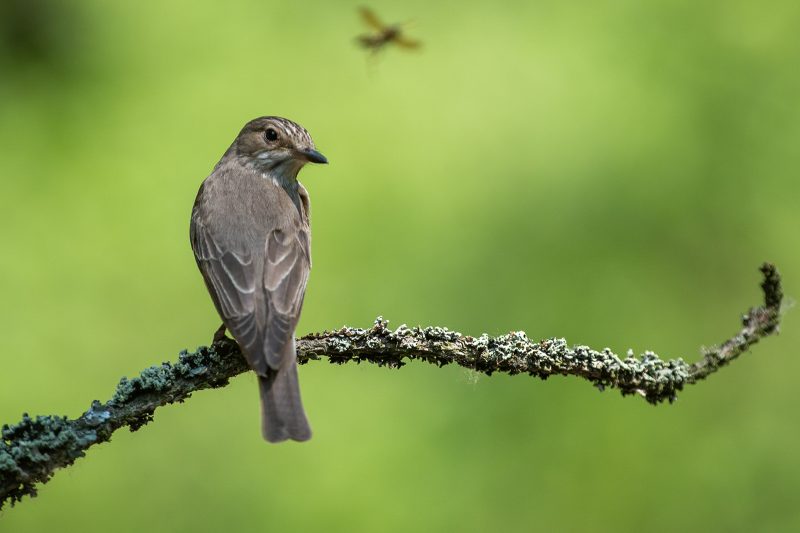 Take a seat in a dry spot with your back against a tree. Choose an area close to the edge of the woodland. Then just watch and, very importantly, listen. You will often hear woodland birds before you see them.

Learning their calls, songs, and vocalisations will, ironically, open your eyes to the woodland bird world. I cannot stress this enough; most woodland bird surveys are carried out by sound alone, and very rarely does the surveyor see the species. 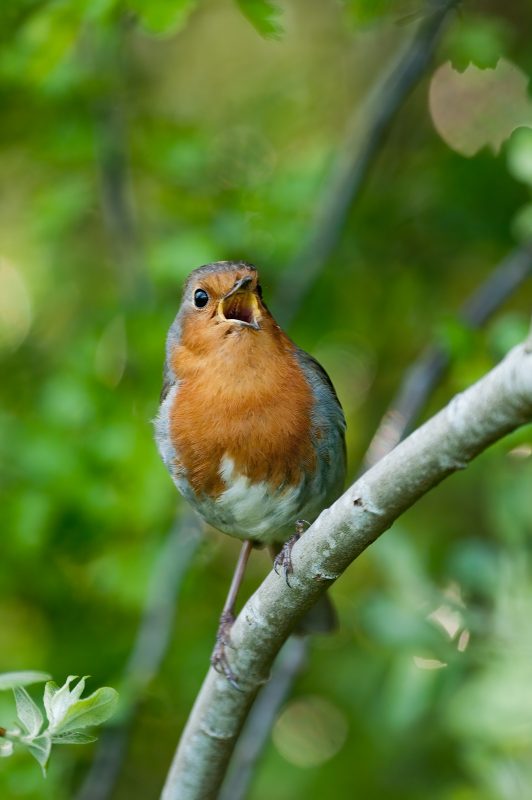 Arguably, the best way to learn is to hear a bird singing, and then to find it visually. Use binoculars to identify the bird. This process of listening and absorbing birdsong, searching, and eventually finding and identifying the bird, means that the song has entered your brain and is stored away, nicely reinforced by the visual identification of the bird.

The best time to learn birdsong is early in the year, when only a few species are singing and there are leaves on the trees. This makes them easier to find. 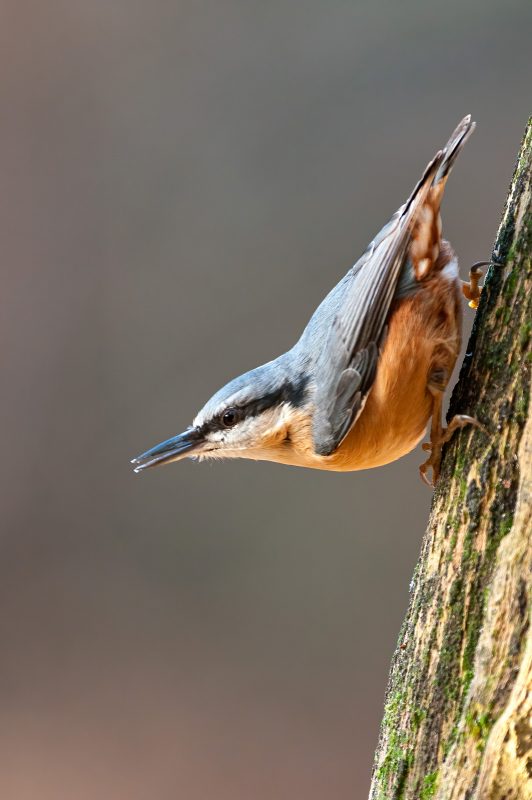 As winter turns into spring more species will start singing, but you will already have a tool-bag full of stored birdsong. You just add a new song each time you find it. You can start this at any stage of life and become competent at it if you dedicate sufficient time to the process.

In spring, you will find territories by birdsong. Beautiful though it sounds, it is simply a statement which could roughly be translated as “hello ladies, stay away guys!” By staying in the same spot, listening hard, you will soon identify several territories around you.

How to photograph robins

Some birds proclaim their territory aggressively, both vocally and physically. Take the familiar European robin: for many years it has been voted the UK’s favourite bird, as it is so apparently friendly and familiar. 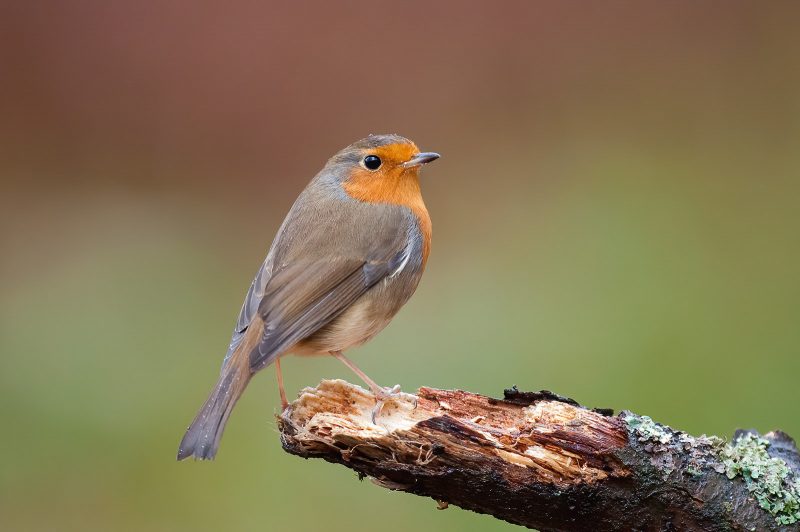 10 per cent of robins are actually killed by other robins, so aggressive is their defence of breeding rights. Robin feeding behaviour partially evolved to follow and opportune on the disturbance caused by foragers. The foragers disturbed leaf litter and soil, exposing worms and fat, juicy grubs.

Take wild boar for example: they will go through the woodland floor like a plough. Robins will follow quite happily, picking up any tasty snacks exposed in the wake of the boars’ destruction. Dig over your vegetable patch and you might think you have a very friendly robin following you. He thinks you look like a wild boar.

One of the best places that robins are approachable and habituated to humans is in the car parks of recreational woodland, where people often eat their lunches after a woodland walk. Disturb some leaf litter around the edge of woodland and the robin will very often approach, allowing for pretty much hand-held shots without the need for camouflage or any other form of advanced field-craft. Easy.

How to photograph nest sites

The wren is incredibly vocal and proclaims its territory loudly. Watch its movement and you will be able to fairly quickly work out the epicentre of its territory. If you see a wren going repeatedly into a dense area of vegetation or the underside of a fallen tree, you will have probably found the nest site.

Around this, wrens often have favourite song perches, usually directly above the nest. Photographing wrens will require a bit more field-craft: a pop-up hide is perfect to capture this tiny, loud bird in full song. 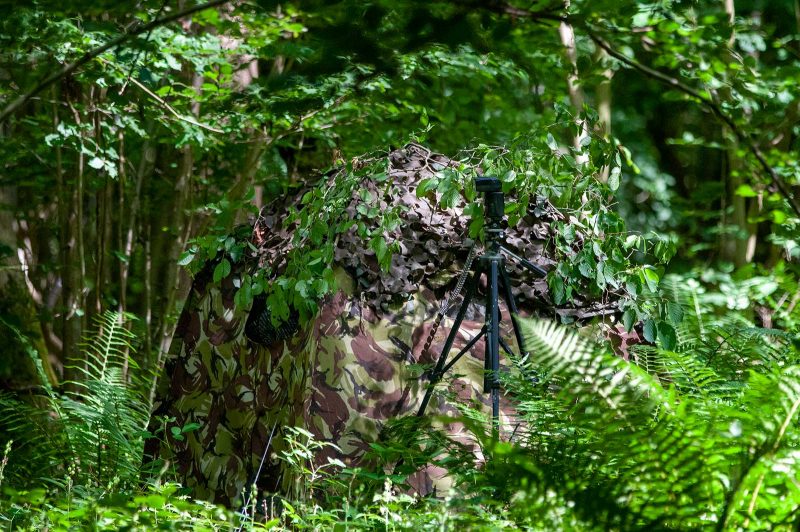 One nest site that is easy to find is that of the great spotted woodpecker. When the young are of a certain age, they all make an incessant sound from the nest hole. It is a photographer’s dream when this nest hole is just at the right height for great images, with the noisy young poking their heads out of the hole and getting overly excited when one of the parent birds brings food back to the nest. 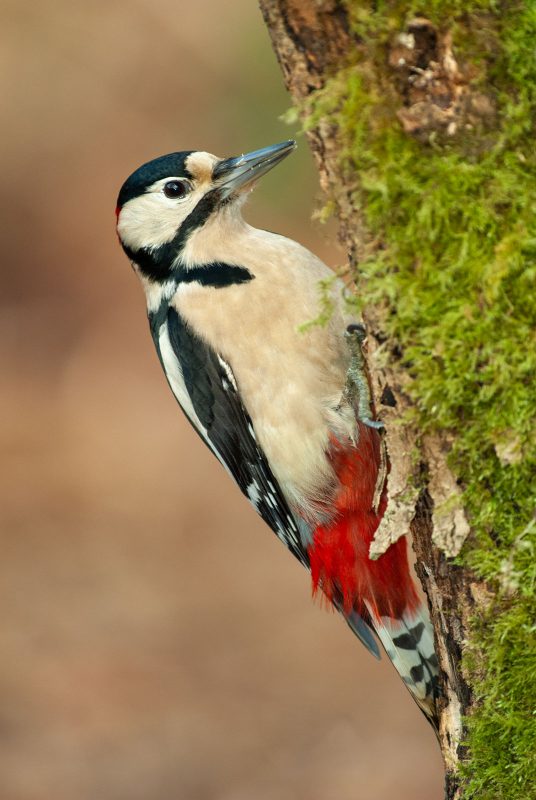 How to photograph tawny owls

The adult tawny owl is a very elusive bird. However, their young fledge very early in their development, and are known as ‘branchers’. This is because they leave the nest as grey, fluffy balls, unable to fly, scrambling around the branches. Initially staying hidden, they also adopt an incessant call which is a sort of rasping squeak. This is uttered every eight seconds; I have had plenty of time to count this interval from my bed, as I have tawny owls breeding every year outside my house.

When the young fledglings first emerge, they are pretty poor at staying hidden and will quite often just perch openly on a branch, allowing for easy shots. Please be aware, however, that the adults are probably watching. So if you approach too closely, you could be liable to attack. 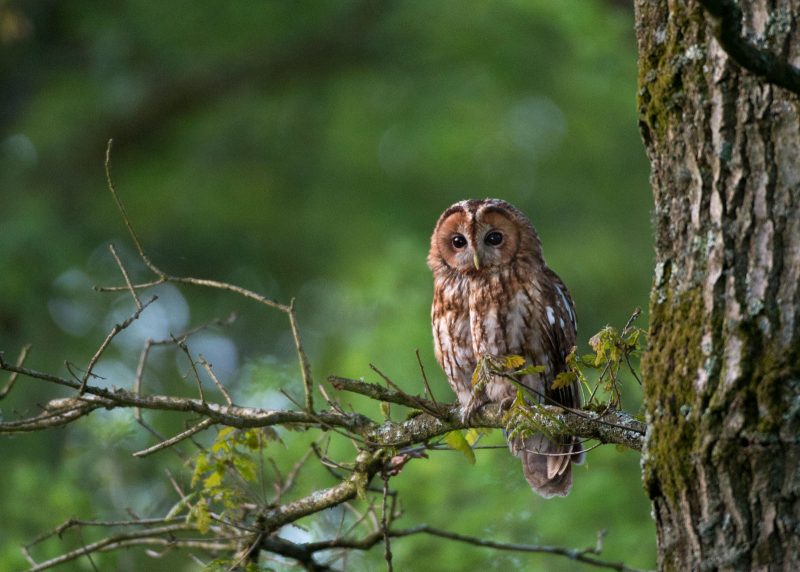 One of the earliest bird photographers in the UK, Eric Hoskins, entitled his autobiography An Eye For a Bird for very good reason: he got too close to nesting tawny owls! However, with a long lens, some camouflage, and being sure to keep your distance, fledglings can be quite incredible to look at and easy to photograph. Finding the young is a good step towards getting shots of adult owls in ambient light.

Tawny owls will feed their young predominantly at night. However, this is a short period of time in the northern hemisphere in mid-summer. Due to this, the owls are often forced to hunt into daylight, which they are very adept at. Set up a pop-up hide relatively near to a young owl and you could be lucky enough to see an adult come in and perch close by, in daylight.

A hide, a scrim netting, a long lens on a tripod, and good hide discipline will all be required for this shot. 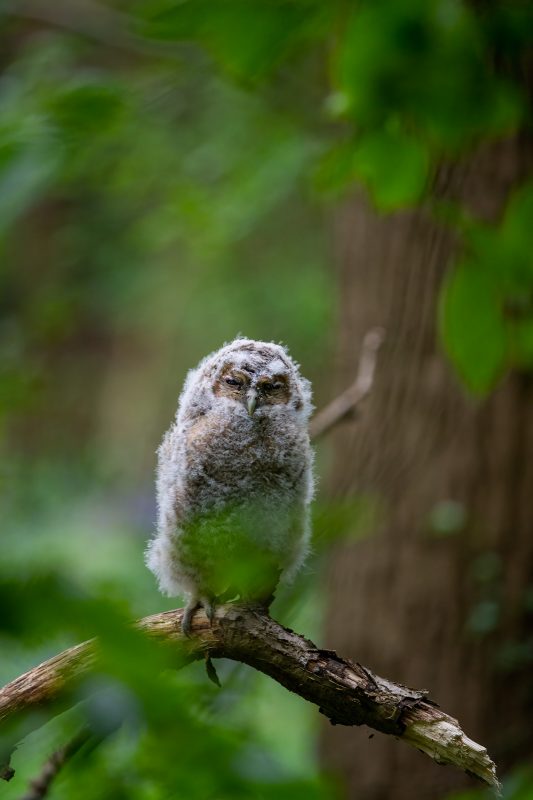 How to photograph outside of the breeding season

The one common theme throughout all these scenarios is that you know where the bird is likely to be, especially during the breeding season. However, if you observe wet areas of the woodland outside of the breeding season, multiple birds will very often utilise the same area for bathing and drinking.

Whether this is down to a combination of exactly the right conditions of depth of water close to cover, or the element of safety in numbers (flocking), I don’t know. But if you find a good bathing spot it can be very reliable, especially early in the morning. It can also be quite easy to set up a low level hide in this area. 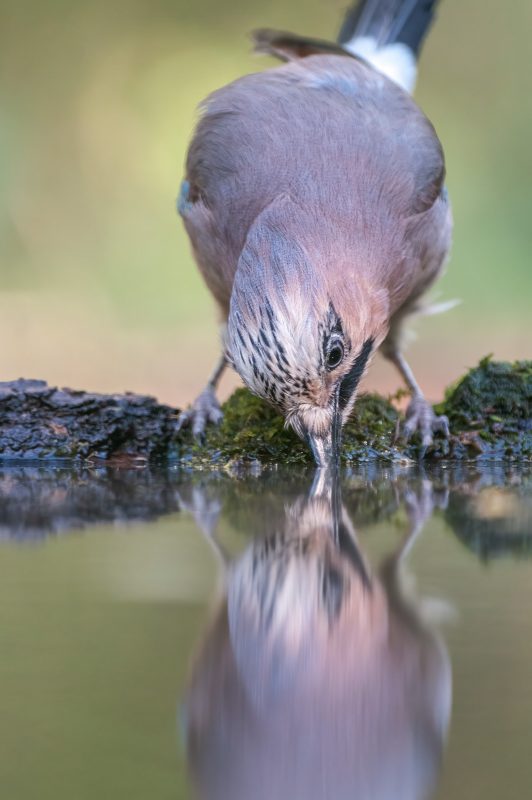 When birds start coming in, do not move the camera too soon, as they are nervous upon approach. Let them settle and start their bathing and drinking, and they soon get carried away and allow you more freedom.

With regards to camera settings for all of these tips, I would personally use Aperture Priority. In woodland, your light is somewhat compromised due to the leaf cover, so you will be wide open, and you can just keep an eye on shutter speed. You can ensure it is high enough by increasing or decreasing your ISO, varying exposure by adjusting exposure compensation. 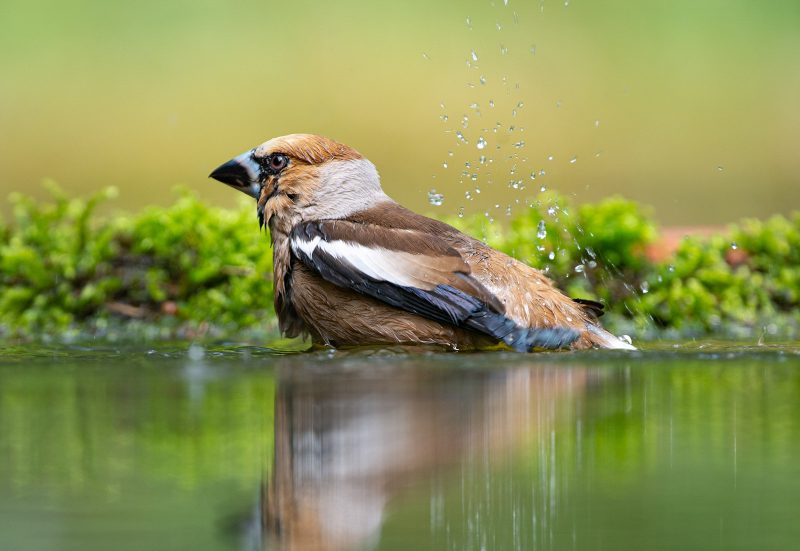 You will need the permission of the landowner if you are leaving public footpaths or setting up hides. Please be aware that all woodland is owned by somebody.