How to Photograph Cheetahs 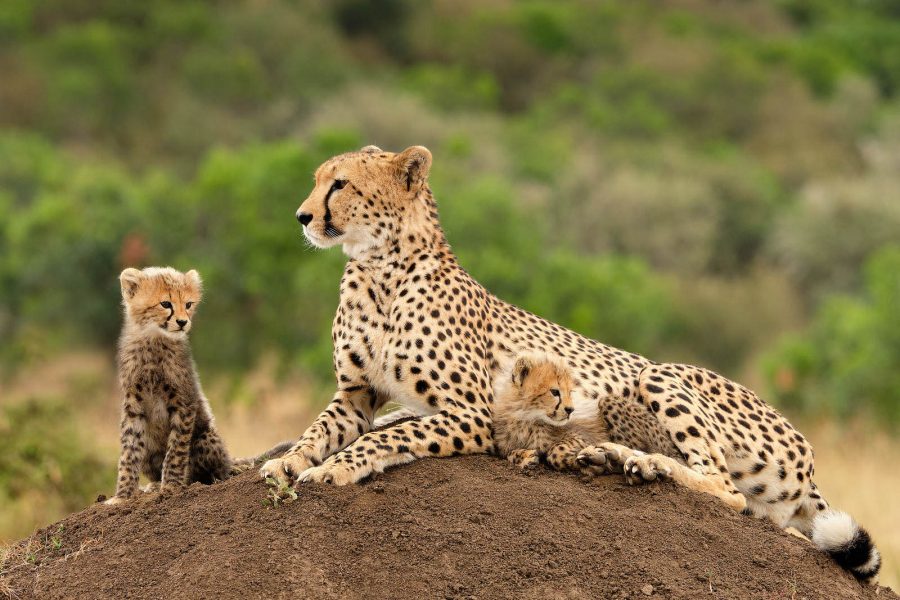 Each and every wildlife encounter on an African wildlife photography safari is an incredible experience. Lions, elephants, leopards, giraffes… the list is endless, and it provides a feast of photographic opportunities.

When I’m on the savannah of Eastern Africa, hearing the Kiswahili word “duma” evokes an extra special moment of anticipation. Cheetah!

Much of my own photography is driven by my interests in natural history, the ecosystems and evolutionary characteristics of animals. Cheetahs are my favourite mammals to observe and photograph. Firstly, they are absolutely beautiful – the supermodel of the savannah! Less anthropomorphically though, I find their highly evolved characteristics to be amongst the most fascinating of all mammals, particularly predators.

Like many iconic species, the cheetah is under serious threat as a result of habitat degradation. The wild population is thought to number as low as around 7000 individuals.

Therefore, careful consideration of how we observe and photograph cheetahs is especially important. Throughout this article, I will point out some ethical considerations.

Where to photograph cheetahs

Cheetahs prefer open grassland plains over wooded areas. The savannahs of Kenya’s Maasai Mara and Tanzania’s Serengeti with their abundance of prey animals are classic habitats, and this is where my own experience of photographing them originates. 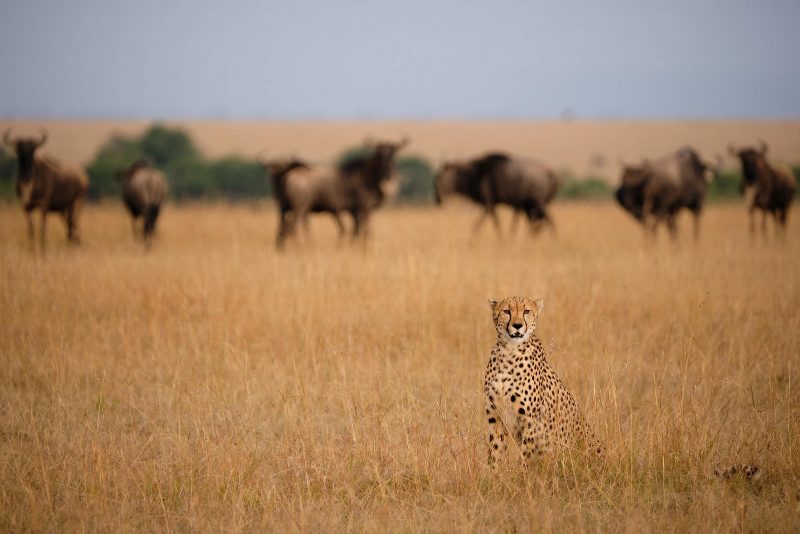 Elsewhere, areas of South Africa’s Kruger Park, reserves in KwaZulu-Natal, and the Eastern Cape can be productive. Additionally, Namibia, the Kalahari and Okavango in Botswana, and reserves in Zambia can be good cheetah spots. A critically endangered sub-species, the ‘Asiatic Cheetah’, can be found in eastern Iran.

In the field, the most crucial advice I can offer is to procure the services of an experienced and qualified /accredited local guide. They are likely to have knowledge of local population, favoured areas and any current activity. Ethically, they will be trained to recognise any stress in the animals and will also be aware of the potential for interference in their behaviour.

Cheetahs are primarily a diurnal predator. Socially, adult females are usually solitary except for nursing offspring until their dispersal. Males can also be solitary, but often range in coalitions. I’ve seen one such male coalition in the Maasai Mara main reserve: five cheetahs known as the ‘Tano Bora’, which means ‘Magnificent Five’ in Maasai. The Tano Bora coalition is thought to be made up of cheetahs from three different natal sources.

Like most predators, cheetahs can often be found by looking at and listening to the reactions of prey animals. Without stress, mammals such as gazelles, zebras, and impalas are likely to be peacefully feeding in loosely formed herds. 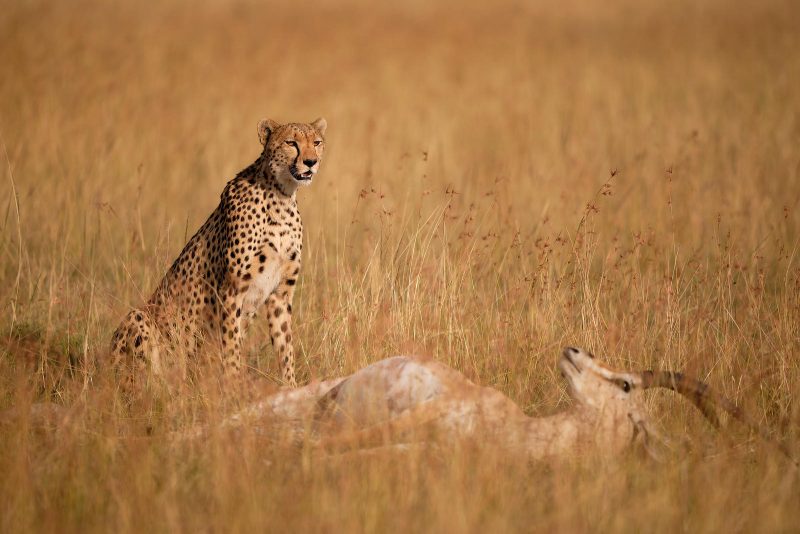 When a potential threat is recognised, prey animals will be alert and staring in the direction of the source. Gazelles and impalas, for example, may run and ‘stot’ or ‘pronk’ – leaping into the air as they run. There are a number of explanations for this behaviour, most relating to avoiding predation. It may be part of an overall altruistic alarm signal to the herd, a way of confusing a predator, or a signal of the animal’s speed and fitness – perhaps the ‘handicap principal’ proposed by Zoologist Amotz Zahavi.

Zebras may also emit their distress ‘barking’ call and impalas, their snorting cough. Both are unmistakable and clear sounds of distress that are easily recognised by the trained ear.

A solitary cheetah is unlikely to be a major threat to larger adult mammals such as zebras, wildebeest and buffalo. However, a coalition of males can greatly enhance ability to hunt these adult species. Young zebras and wildebeest are vulnerable to solitary cheetahs, as are adult impala and Grant’s and Thompson’s gazelles. 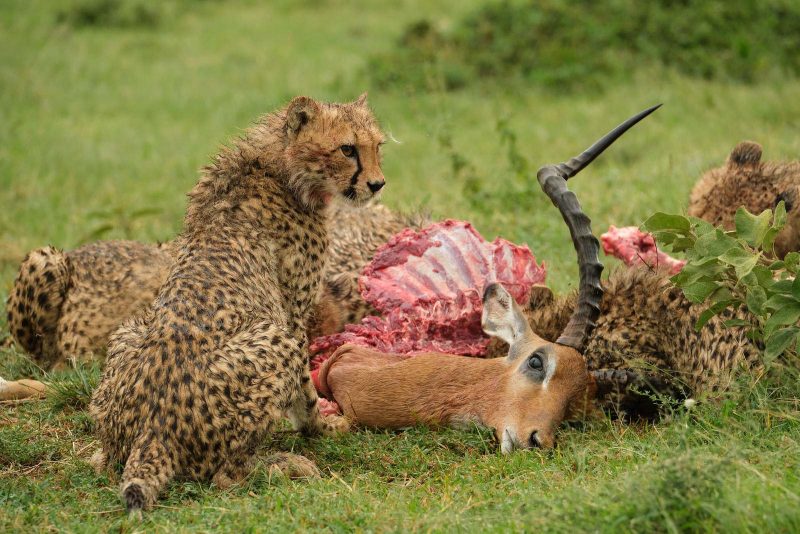 Together, we can use the visual and audible signals of prey species to find predators, and the behaviours of individual prey species may give us an idea of which predator before we even see it.

It’s incredibly important not to chase a hunting animal for closer photography. This is likely to cause stress to both prey and predator, and prey animals to flee prematurely. Ultimately, it is likely to cause the hunt to fail, and therefore clearly crosses the line in terms of unethical interference. Remember, the success of predators is vital to the natural wellbeing of the overall ecosystem.

A feeding cheetah is always on high alert, especially if it is a female with cubs. Cheetahs do not gorge themselves on food like a lion does, nor do they scavenge. A cheetah prefers fresh meat and will eat only what it needs before quickly moving on.

Whilst feeding, cheetahs will frequently sit up and look around for threats. Scavengers like lions, hyenas, and jackals can pick up on the scent of a carcass and move in rapidly. I’d say that a feeding cheetah spends more time looking around than it does actually feeding. Coalitions of two or more cheetahs will take turns to feed while another looks out for such threats.

Firstly, I recommend using a DSLR or mirrorless interchangeable lens camera. It’s possible to get fairly close to cheetahs while still being ethical. On last year’s photo safari in the Maasai we were stationary as a female passed us: her young cubs just continued on their path, going right under our vehicle and out to the other side!

When you’re this close, it’s good to have a range of lenses to choose from. My own preferences are a 100-400mm and a 50-140mm lens. Together, they offer a great deal of versatility for closer portrait or wider habitat photography. 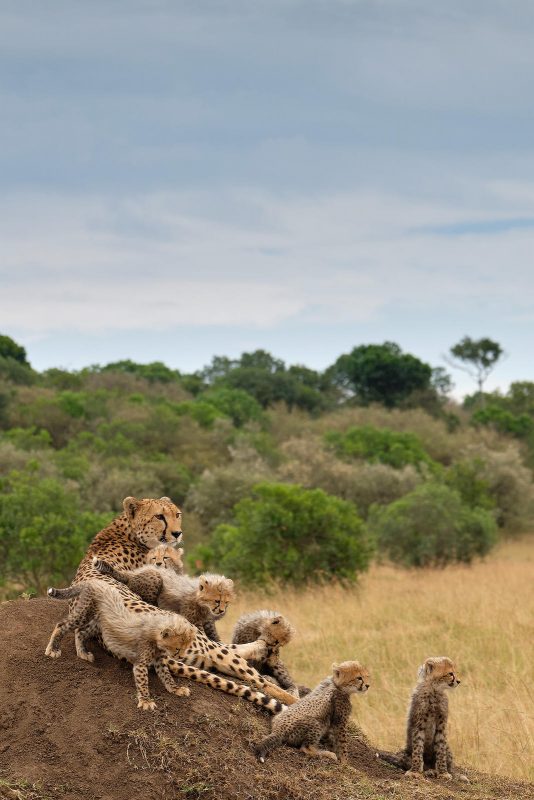 I find a tripod isn’t usually practical in a safari vehicle, but a monopod can be very useful in taking the strain of heavier lenses. A bean bag is also a good option if there is somewhere to rest it. Sometimes with wider shots, I may use a graduated filter to balance the exposure between land and sky.

There are no definitive rights or wrongs here. Your chosen method of exposure should be that which is the most intuitive and familiar to you, and that you feel most confident in being able to quickly adapt in changing light. Personally, I use either aperture priority or manual aperture and shutter speed with auto-ISO.

In aperture priority, I select the aperture I want to use for creative control of depth of field. The camera meter will determine the shutter speed for me, which I can influence with manual control of ISO and exposure compensation.

Increasingly, I am opting to manually set both my aperture and shutter speed and use auto-ISO to balance the exposure.

Fundamentally, I choose continuous autofocus. This means autofocus will continuously evaluate the distance between you and your subject to achieve focus when activated. On my Fujifilm cameras, this is marked ‘C’ on the focus mode selector. Nikon and Sony cameras use the term AF-C, Canon use AI-Servo, and Olympus C-AF. It is essential for sharp in-focus photographs of moving subjects.

When a subject is stationary or moving very slowly, I use a single autofocus point as close to the eye as I can. Modern cameras have a wealth of autofocus points, so I select one which fits my compositional goals: perhaps taking into account habitat and surroundings, other animals, or to leave a little bit of negative space in the direction the animal is moving into or facing. 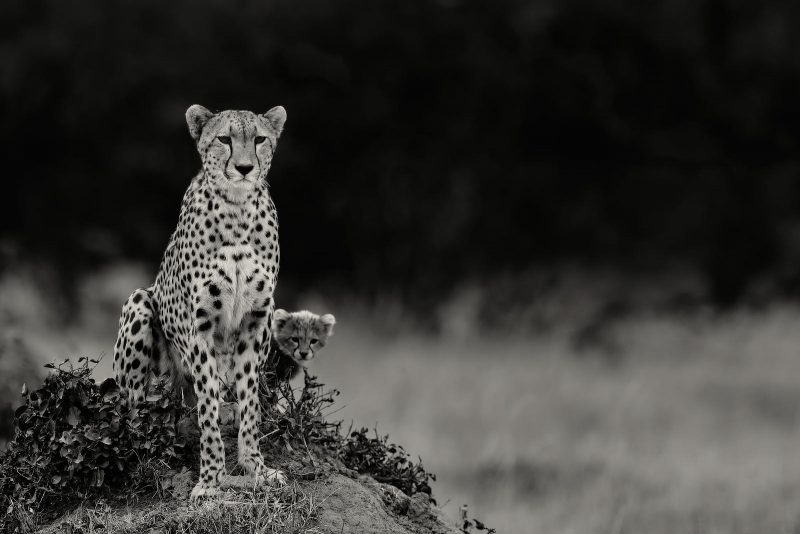 When a subject is moving quickly and I cannot accurately and consistently keep a single autofocus point in the correct position, I may opt to use a group of autofocus points together to dynamically share autofocus information. You can usually select how many points you would like to use together in this way.

Cheetahs can accelerate from 0-60mph in around 3 seconds, and reach a top speed of nearly 70mph. Their non-retracting claws and rudder-like tail help them change direction quickly at full speed. A good working knowledge of your camera’s autofocus system is therefore especially important if you are lucky to photograph a cheetah while hunting!

Your camera’s burst mode will be useful when photographing any sort of action, be it just a yawn, playful cubs, feeding, conflict, or a hunt. Being able to take a few shots (or more!) per second can help you capture moments of action which maybe so fast that your own eye may miss it. It also helps to capture a series of shots this way, rather than repeatedly jabbing at the shutter button, which can result in excessive camera movement.

However, It’s not just about keeping your finger on the shutter button and taking hundreds of photographs. You’ll end up with full memory cards and hard drives very quickly! Instead, it is about using your fieldcraft to predict the moment of action and quickly taking maybe 7-8 frames or more, to capture the action at its most dramatic. 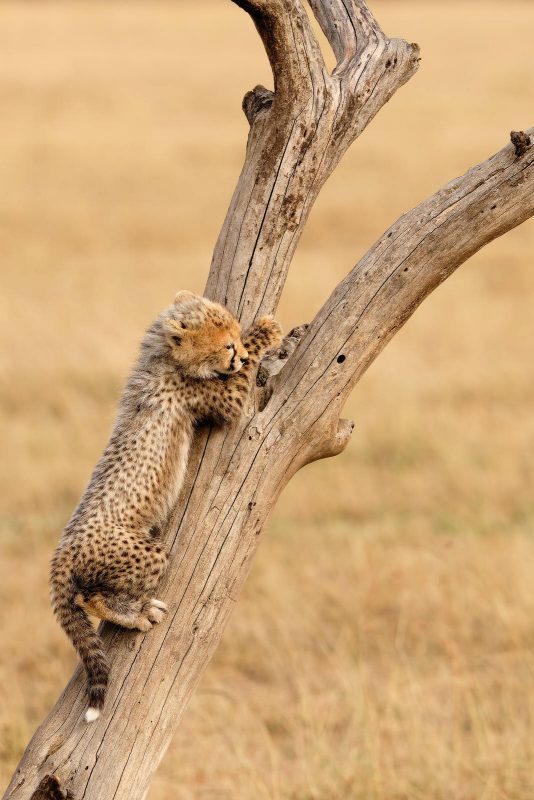 …ethically and safely. To reiterate, this is where a qualified guide and your own fieldcraft knowledge is crucial. Give hunting cheetahs the space they need, learn to recognise stress, and avoid getting too close. Be aware and respectful of your surroundings so you don’t block any escape routes, especially when cubs are present.

Read more: How to Photograph Wildlife on Safari in Africa

We’ve probably all seen photographs of cheetahs jumping on top of vehicles. They do this to give themselves a greater vantage point of their surroundings. Many tourists love this, but as you can probably guess, It’s bad behaviour. It constitutes interference and can potentially injure the cheetah if it becomes alarmed and dismounts quickly. A good guide should actively dissuade this sort of behaviour. Don’t be afraid to ask your guide why; it’s all good fieldcraft.

Lastly, getting up close with cheetahs in their natural habitat is an amazing experience. Take your camera away from your eye now and again and enjoy just seeing, listening, and being with wildlife.