How to Use a Wide-angle Lens for Landscape Photography 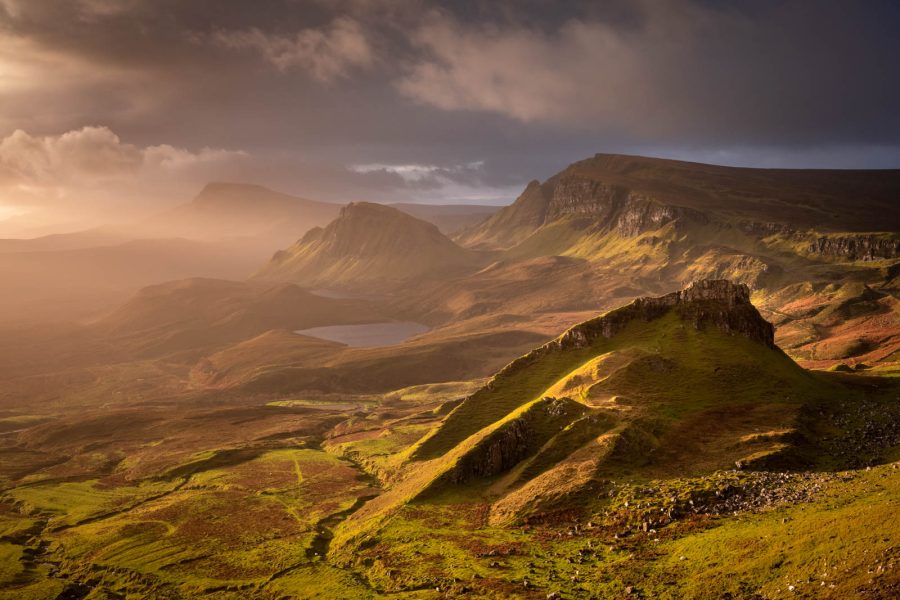 The lenses most closely associated with landscape photography are wide-angles, so much so that many photographers refer to them as ‘landscape lenses’. Admittedly this is an overgeneralisation as many different focal lengths can be used for shooting landscapes. However it’s still true to say that most landscapes are shot with shorter focal lengths.

Technically speaking, a lens is considered a wide-angle if the field of view is greater than 65º, which roughly equates to a focal length of 35mm on a full frame. By modern standards, 35mm is a very moderate wide-angle however, and many photographers would usually only consider lenses of 28mm or wider to be ‘true’ wide-angles.

The last couple of decades have seen impressive developments in wide-angle lenses.

Not too long ago 24mm would have been considered ultra-wide, and 20mm positively exotic, but all modern manufacturers produce lenses far wider than that. The once seemingly extreme 16-35mm zoom now appears quite conservative, with lenses such as Nikon’s Z14-30mm f/4 and Canon’s 11-24mm f/4 being commonplace.

Wide-angle lenses are popular with landscape photographers primarily because their extensive field of view makes it possible to capture sweeping vistas. However, they also have a very distinctive look and character, and there is more to them than simply their ability to ‘get a lot in the frame’.

Wide angles create the potential for exaggerated perspective by allowing you to get very close to a subject. The distance between the subject and background appears to increase; the subject looms large in the frame as everything else stretches out behind it, producing a real sense of drama.

Distortion, particularly in the corners and edges of the frame, is also a feature of wide-angle lenses. Depending on your composition, this can create a feeling of pulling the viewer in from the corners of the frame.

A final defining characteristic of wide-angles is their inherently large depth of field.

With good technique it is possible to generate enough depth of field to keep everything sharp from the foreground through to the furthest point in the background. This look is extremely common in landscape photography, which explains why a wide-angle lens is an essential item in a landscape photographer’s kit bag.

What to photograph with a wide-angle lens

When composing wide-angle landscape scenes, think foreground. Wide-angles come into their own when you get in close to foreground interest to create dramatic perspective.

The key with foreground interest is to be selective. All too often, potentially good landscape photographs are spoiled by poorly chosen foreground composition. It is not enough to set up in front of the nearest big rock; you should choose foregrounds which relate to the background in some way, and which encourage the viewer to study the frame.

Shapes are important; diagonal lines and triangles pull the eye in, whereas squares and rectangles tend to block.

Camera height is also important. Getting low puts emphasis on the foreground, which can heighten the impact of the composition. However, getting too low can remove the separation between the different planes in the image, which has a negative impact on the perception of depth.

A higher viewpoint may not have quite as much immediate drama, but it will open the planes in the composition giving it more depth. So, when working with wide-angle lenses and foreground interest, experiment with different heights to find the best balance.

Use wide angle distortion to your advantage. Objects in the bottom corners will be stretched, creating powerful lines which can act as ‘pointers’. These direct attention into the frame and help to highlight background focal points.

Architectural subjects are a natural fit for wide-angle lenses as you can exploit the distortion of wide lenses by deliberately pointing them upwards rather than keeping them level. This generates eye-catching compositions with exaggerated and dynamic angles.

Tips for shooting with a wide-angle lens

The classic landscape photograph is a ‘near-far’ composition (i.e. sharp from front to back) with a big foreground. This is easy to achieve with a wide-angle lens and its naturally wide depth of field, but good technique is needed to ensure front-to-back sharpness.

Stopping down the aperture increases depth of field, but this can come at a cost. If you choose an aperture that is too small, you will lose image quality to diffraction.

Loss of sharpness is caused as light waves are bent as they travel through the lens aperture, and this gets worse the smaller you make the aperture. Most lenses are at their sharpest one or two stops down from their maximum aperture; for an f/4 lens this would be f/5.6 – f/8.

If you still need more depth of field, f/16 will still provide decent image quality with most lenses, but try to avoid the extremes, such as f/22, as you will see a noticeable drop in sharpness.

If you cannot get enough depth of field without stopping down beyond f/16, then consider focus stacking. This is where you shoot the same composition focused at different points in the scene, and then blend the images into one single image with extended depth of field.

To maximise depth of field, you need to know where in the scene to focus. Traditionally, photographers have employed the technique of focusing on the ‘hyperfocal distance’. However, a quicker and easier technique with a wide-angle lens is ‘double distance’ focusing.

For this, look at the closest object in your composition which you want to be sharp, calculate how far it is from the camera, then focus on something at double that distance. Your calculations need to be reasonably accurate, but absolute precision is not necessary.

It really is that simple, and in the vast majority of cases it works perfectly. Review the shot afterwards and check sharpness, where necessary adjust focusing and/or aperture before re-shooting.

When using a wide-angle lens you’re capturing a big scene, which could potentially contain a range of tones (e.g., a bright sunset sky to a dark, shaded foreground). This causes problems if the tonal range exceeds the dynamic range of the sensor. It results in either an overexposed sky or an underexposed foreground, neither of which is ideal.

To capture the full tonal range of a scene, you can use a graduated neutral density filter to darken the sky, bringing the tonal range within the dynamic range of the sensor. Or  you can take a series of bracketed exposures, which you then blend into one single shot.

Although excellent for capturing big views and creating dramatic perspective, using wide-angle lenses is not problem free. Framing can be tricky, especially with ultra-wide lenses of 20mm or wider. As they have such a wide coverage, finding a coherent composition, which is not too busy, can be an issue. Look for strong foregrounds and dynamic lines in the composition to help add a sense of structure.

Distortion is another issue, especially if there are buildings in the scene, as they can appear to lean at odd angles. Try to reduce this at the shooting stage by keeping the camera as level as you can, without compromising your composition.

Perspective corrections are possible in post-production, but the less you have to do, the better. If you know you are going to have to make some corrections at the editing stage, compose slightly wider, as the image will need cropping after the corrections have been made.

If you like your landscapes polarised, watch out for uneven polarisation on anything shot wider than 28mm. You will typically see this in blue skies: either there will be a dark band in the middle, or one side will be noticeably darker than the other.

It is impossible to eliminate the effects of uneven polarisation completely, but you do not have to use maximum polarisation. If you dial it back slightly, the effect will be less obvious. If you wait for the right cloud patterns in the sky, you can also use this to disguise it.

With ultra-wide lenses, you may find that you get uneven exposure across the frame. This occurs when there is a strong light source coming from one side of the frame, such as when you shoot with side-lighting at the beginning or end of the day.

To correct it in-camera, you can use a soft-edged graduated filter placed over the lighter half of the frame (rather than over the sky, which is more usual). Or you can deal with the issue in post-production using a digital grad.

If you’re in the market for a wide-angle lens, you will see that there are a lot of options both from the camera brands themselves, and from third party manufacturers.

The first decision to make is whether to go for a prime (fixed focal length) or a zoom lens. Traditionally, if ultimate image quality is the goal, photographers have chosen primes. However, modern zooms are so good that the loss in image quality (if there is any) is barely noticeable, so it’s worth compromising. A zoom offers so much flexibility; you can find the ideal position from which to shoot and then zoom to frame the shot exactly as you want.

Often, you’ll see that there are two versions of a lens on offer: one with a fast maximum aperture (e.g. f/2.8), and one with a more modest maximum (e.g. f/4). The latter will usually be cheaper, lighter, and more compact.

So unless you plan on doing a lot of astrophotography, or reviews suggest a significant difference in image quality, save yourself some money and weight and get the slower lens. If you do get a faster lens, try to avoid those with a protruding front element. It is difficult to use filters with these lenses, and the filter systems which are available are bulky, awkward to handle, and expensive.

There should be a wide-angle lens in the kit bag of every landscape photographer. Now you know the benefits, and how to avoid the pitfalls, get out there and start shooting some landscapes with dramatic perspective!