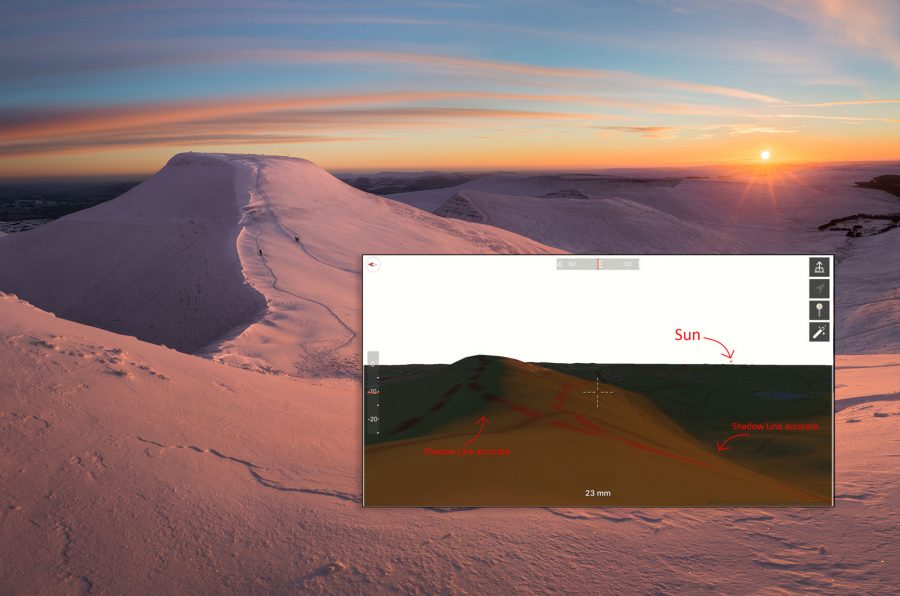 It’s been an exciting few years for us gadget-loving landscape photographers! There’s been a real explosion of phone and tablet apps for all to use in the photography world recently. Some help you work out depth of field, whilst others calculate long exposures when using ND filters. There’s even some for planning the angle of the sun for landscape shoots.

I’ve been singing the praises of Stephen Trainor’s The Photographer’s Ephemeris (TPE) app for a good number of years now and, to this day, it’s still a fundamental part of my photo-planning workflow. If you’re not using this already, you don’t know what you’re missing! It used to be just a PC/Mac program (still available free online) but it then ventured out onto phones & tablets in 2015, and is very intuitive to use out in the field.

Other similar apps came along too, another one I use is PhotoPills, has an exceptionally handy ‘Augmented Reality’ function to it. It works by using the camera on your phone, and overlays the sun path and rise/set positions onto the landscape around you. Plus the path and many other extras including, stars and Milky Way position. Whilst both of these tools will be generally accurate and give you a rough idea of where light will fall, or where the sun, moon or astronomical objects will be at a certain time and date, they don’t truly help to visualise the possibilities of a scene before visiting a new location. This is where Stephen’s newest creation comes in.

This new 3D version has hit phones and tablets, although it’s only available for iOS so far. It’s a unique approach to planning those landscape shoots. Rather than using a top down view of Google Maps, like previously in the standard version of TPE, this time you can explore the world in 3D. You drop a pin on the map at your shooting position and can even adjust the focal length to visualise the field of view of your camera, all whilst viewed from virtual head height.

Scroll through the day with the slider and see how the light falls on the land, day or night. 3D mapping tools are not a new thing, the likes of Google Earth have been around for a while now, allowing users to explore the landscape virtually. However, it doesn’t reproduce light and shadows very well. Additionally, there’s a good number of night sky apps that display a 3D view of the stars from your location, but again the skies are usually against a generic landscape. So TPE 3D offers a real combination of all these benefits for photographers. The sun, moon, and stars are all shown against a 3D model of the actual landscape, wherever you want. To see how the light and shadow will fall on the land for any location on Earth is a great natural light visualisation tool for outdoor photographers. The ability to watch a sunrise at anytime in the future or past, with light illuminating the actual topography of your planned shooting location, is a huge step forward.

How Good is It?

Before using a new tool, I thought it would be a good idea to test it on photos that I’d previously taken and how accurately it rendered the landscape and scene. I can then see how good it would be for future shots. We’ll start with this shot of a snowy Picws Du in the Brecon Beacons. As this was a few years back, I tapped on the date at the top of the screen to change it to match the photo. 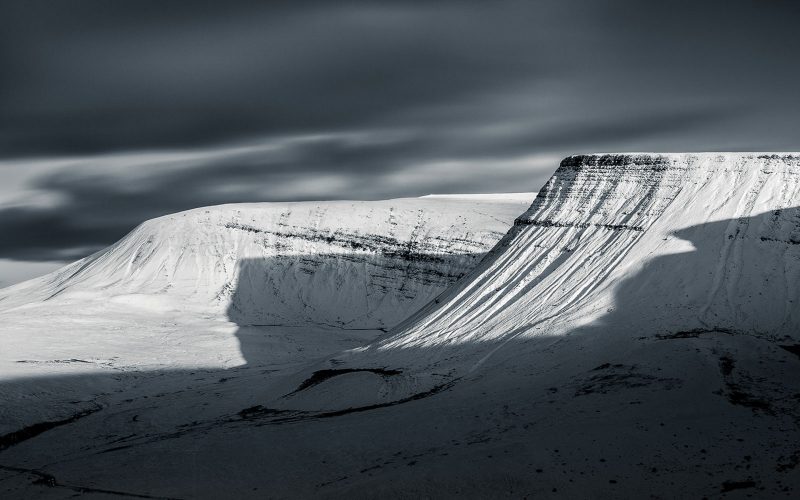 Like using most apps on phone and tablets, everything’s touch screen and it’s all about the gestures. So you drag around the world with one finger, while use two pinching or rotating allow you to zoom in/out, rotate. You start off at the ‘flight ceiling’ viewing height. 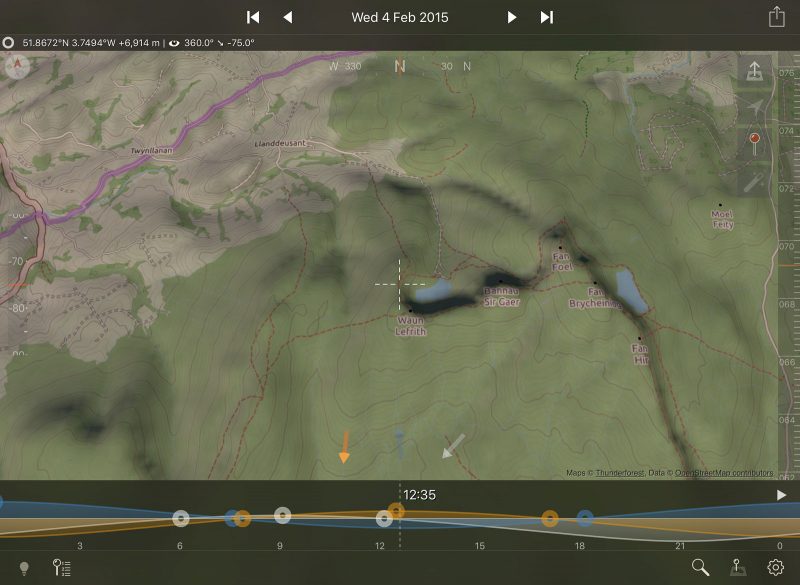 Once decided on a location, move the map around until the crosshairs are over your viewpoint, then press the Pin button to place it on the map. Here you can also toggle the ‘Enhanced Mode’ on/off to increase the detail in the topography. 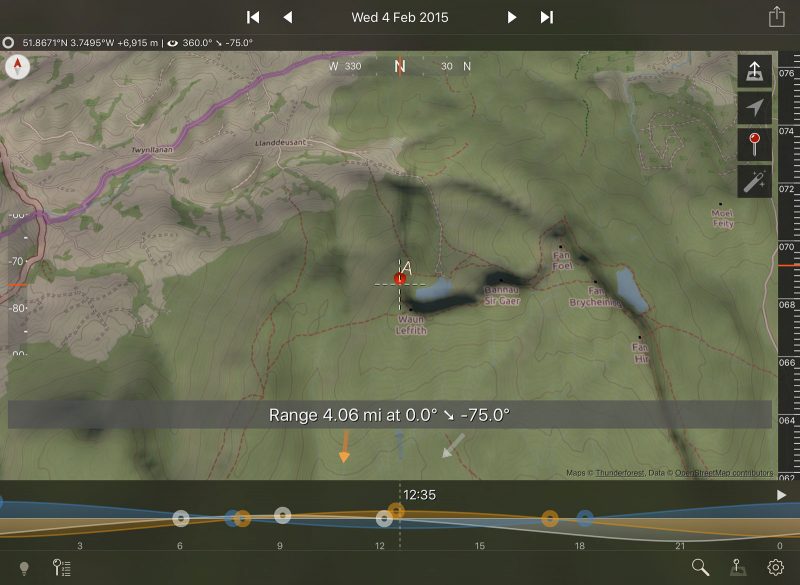 Next up is to jump down onto the landscape by double tapping on the pin location. You’ll now be viewing the landscape as you would normally. 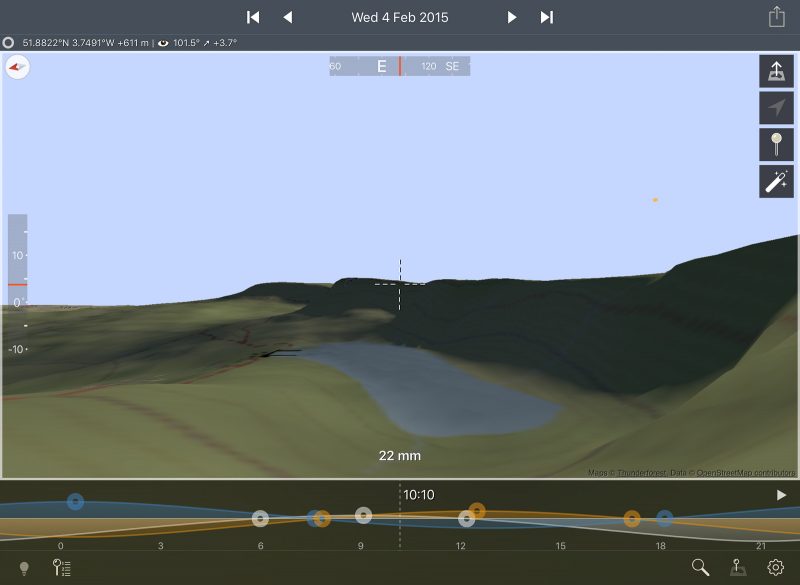 Once on the ground, you may need to change your viewpoint, so by holding one finger down on the screen the view will walk forwards. You can also spin round and view the surroundings by dragging left and right. You can pinch to zoom in, and change the focal length at the bottom of the screen. 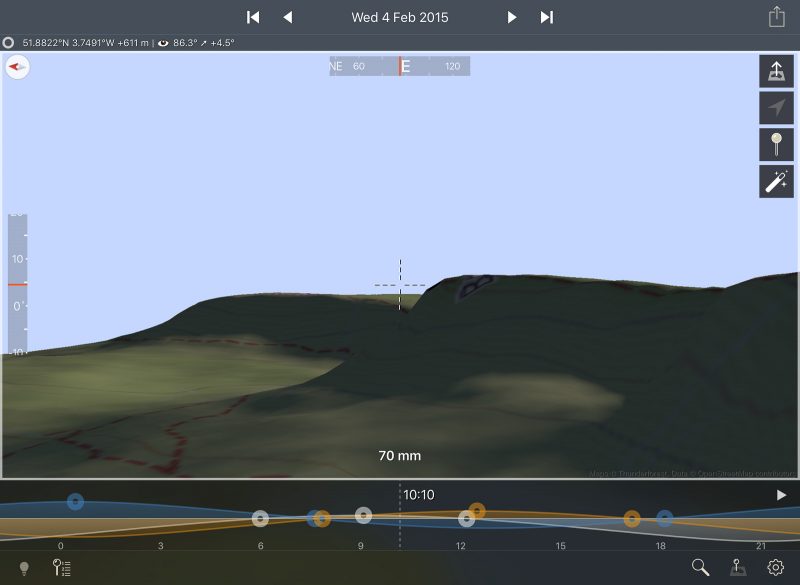 Here’s the good bit. At the bottom of the screen is the time slider – the dots are key markers for sunrise, sunset, moon rise and other main transit points throughout the day. These are great to jump to set times, such as sunrise or sunset. You can also drag side to side to change the time and sun angle, watching the shadows on the landscape change. 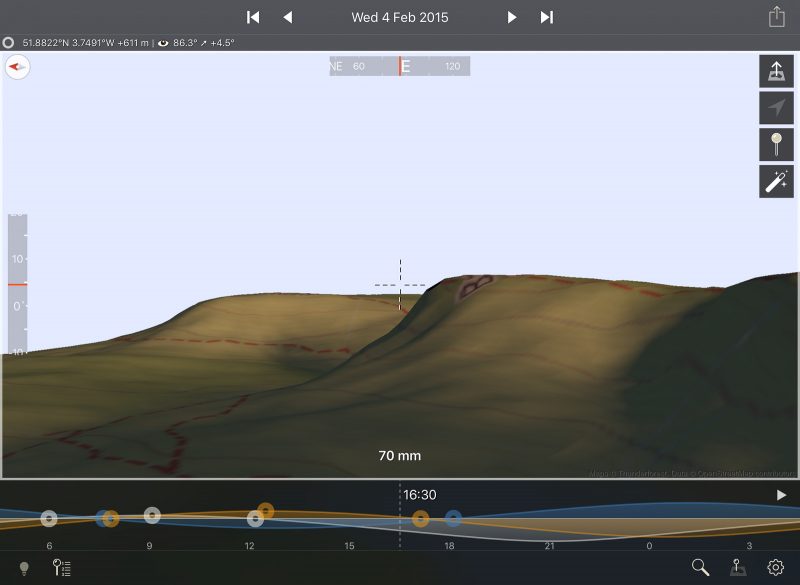 So comparing this to the actual photo it’s pretty impressive! The topography isn’t super detailed, but it definitely show the main points of the scene that will be illuminated and what will fall into shadow.

Trying it out on some other comparisons in the past, it does a great job too! I would say it works on land-locked or mountainous regions the best, as you can really get an idea of the shadow lines and the way the light falls in gullies and hillsides.

However, here in Pembrokeshire, Wales, where I do most of my shooting, we have the coastal path to utilise and the representation of the coast in 3D still needs work in my opinion. Having worked previously for many years as a computer games 3D artist and know how much work goes into modelling environments, I’m not expecting highly detailed cliffs and every rock replicated the same as real life, as this would not only take a vast amount of time to build but also increase the size of the app and the segment file sizes. But land that finished with a more sheer drop at the coast would be most welcome. I guess, though, that in the grand scheme of things, this tool is still better to visualise where the sun or moon will be on set dates and times in the landscape versus the existing 2D version.

For night shooters, it rendered the Milky Way position very well which matched up with my recent image. Again, coastal features such as sea stacks are yet to be added to the 3D model.

Overall, I think it’s great to have new tools at our disposal. With the release of TPE 3D, it’s a real big step forward against the previous 2D version. The 3D is a bit clunky to operate and there may be a few choice words at first, but once you know your way around it’s very good indeed. I’ll still use both tools, the 2D and 3D apps, to truly plan my shots in future. Whilst the coast, or where land meets water, isn’t featured as accurately as I would like, I’m sure there’ll be higher resolution updates in the future which will make it much more of a complete program.

The app is available for iOS devices from the iTunes store for £11.99.