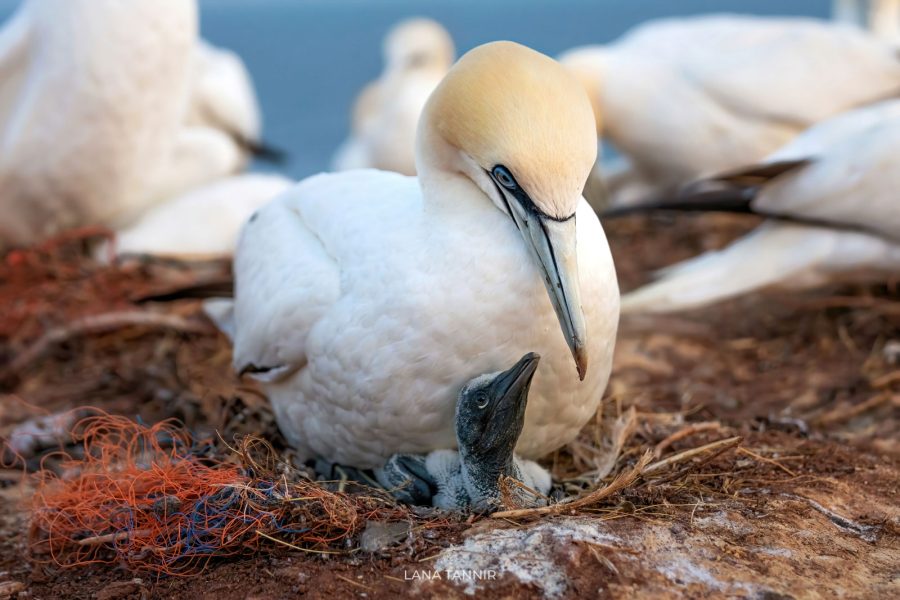 As a professional nature and conservation photographer, I have been invested in documenting the intersection of humans and wildlife over the past few years. Besides studying biodiversity and ecology at university, I frequently witnessed diverse anthropological impacts on the environment throughout my photography assignments.

In fact, the slew of conservation issues and threats to biodiversity were an impetus for merging my two passions for the natural sciences and visual arts.

Unveiling the way that we interact with our environment is one of the most powerful forms of storytelling for me. I strive to contribute to the welfare of nature and depict solutions to resolve some of the most critical problems we face.

While this often involves travelling long distances to some of the most remote corners of Earth, I was surprised to discover that one of the contemporary challenges for our marine ecosystems was located right on my doorstep.

Even though I had frequently heard of the marine plastic pollution problem, the issue materialised for me when I came face to face with its ramifications at a local level in northern Germany.

The first time I encountered marine plastic waste on Heligoland’s bird cliffs was in January 2020, while pursuing a project on seal colonies on the German high-seas island.

What originally appeared as algae and seaweed lining the rustic red sandstone turned out to be an aggregate of clustered red and blue plastic threads implanted into the rocks.

Perplexed by the scenery, I was determined to discover how such large quantities of plastic waste could have wound up on the cliffs and the consequences thereof.

This was the beginning of Nesting in Plastic – my photographic documentation of the impact of marine plastic pollution on northern gannets in Heligoland.

Marine plastic in the North Sea

Heligoland is a small German archipelago in the North Sea. It attracts a vast and unique variety of flora and fauna, which benefit from the proximity of the gulf stream.

From March to October, the rocky cliffs of Heligoland serve as a nesting habitat for the only northern gannet colony in Germany. The large seabirds annually reconvene with their mate on the Lummenfelsen – a nature reserve on the western edge of Heligoland – where they renew their bond and raise a single chick.

In the process of building their nests, northern gannets normally accumulate an assortment of grass, algae, feathers, and mud at sea. However, in Heligoland, an estimated 98% of all gannet nests contain plastic waste, totalling 1.6 tons of marine litter.

Juveniles and inexperienced adults often become entangled in the plastic material, rendering them unable to hunt or fly. As a result, approximately fourteen birds perish per day due to starvation or strangulation.

A small glimpse into a larger issue

While currently not rendered a threatened species, northern gannets are representative of a problem that spans a much larger scale.

Approximately 20,000 tons of plastic are dumped into the North Sea annually. Meanwhile, 600,000 cubic meters are currently present in the depths of its waters. Apart from seabirds, marine waste also affects numerous other wildlife, such as seals, whales, dolphins, sea turtles, fish, and even terrestrial animals.

Resolving the marine plastic problem is strikingly complex. Besides taking more than 400 years to decompose, recycling plastic is a challenge due to its chemical composition.

Meanwhile, retrieving ghost nets at sea calls for experienced divers and is a costly operation.

Lastly, a shift towards plastic alternatives requires a synonymous agreement between plenty of decision-makers with contradictory objectives.

Even in Heligoland, cleaning up the plastic integrated into the gannet nests would cause more damage than good, according to local scientists. In and of itself, removing the waste from the cliffs would fail to resolve the issue at its core.

In an effort to rebuild their nests, the gannets would continue collecting fishing nets and plastic pieces from the North Sea. More importantly, the newly-collected plastic would pose an even greater risk of entanglement for the seabirds, as it is not yet ingrained into the nest.

Conservation photography can be instrumental in creating change. First and foremost, images are conversation-starters and eye-openers, which help to visualise an issue and makes it accessible to a broader audience.

By inviting the public to connect to a topic on an emotional level rather than through dreary facts, the gap between scientific research and public understanding can be bridged.

The visual medium can also effectively be used to connect the dots between cause and effect. Generally, we tend to focus on the short-term and occupy ourselves with our daily lives. Witnessing photographs that depict the consequences of our personal choices can help us to understand the issue at large and identify with it.

This, in turn, can incite both individual and community engagement. In other words, a photograph can move us to care, and it can unite us with other people that do so, as well.

Similarly, while a coastal clean-up is an impractical solution in Heligoland, raising awareness about the problem using photography can catalyse a shift.

As a society living in a developed country, the overarching presumption is that dilemmas, such as plastic pollution, do not directly affect us. With Nesting in Plastic, my objective is to reverse this belief by illustrating its impacts on a local level and revealing the acuteness of the issue.

By focusing people’s perspectives inwards, I want to encourage each individual to reflect on the consequences of their own choices, rather than relying on outward sources for answers and solutions.

Using imagery to portray the repercussions of marine waste on Northern Germany’s flora and fauna, I strive to sensitise, educate and mobilise individuals to consolidate and form actionable communities.

Whether they are used for public education, campaigns or activism, conservation photographs take on a life of their own after being published.

In recent years, we have witnessed the power of the visual medium in creating global movements on disparate conservation issues. Many of these were triggered by a single image, such as a turtle and a straw, a seahorse and a cotton swab, or an emaciated polar bear.

Using conservation photography to raise awareness and initiate a conversation about marine plastic litter can send a compelling message to each individual: that they, too, have the power to make a difference by starting at their own doorstep.