What You Need to Know When Choosing a Memory Card

Every photographer needs memory cards. You rely on them to store your photos safely until you can get home and transfer them onto something more substantial. A lot of people will simply buy the first memory card they see, assuming that it’s a simple piece of equipment that requires no thought.

Wrong! There are many things to think about when you’re buying memory cards. This guide will look at the main aspects of memory cards, and show you what to consider when making your next purchase.

There are three types of memory card that your digital camera will take: SD, CF or XQD.

SD stands for Secure Digital (not SanDisk, which is a brand). SD cards are often the choice of most compacts and entry-level DSLR cameras. They’re small, relatively cheap, and you probably have quite a few lost in the bottom of desk drawers.

CF stands for Compact Flash. Until recently, CF cards were the choice of intermediate-level camera bodies, all the way up to the professional DSLR bodies. They’re about twice the size of an SD card, and more expensive. You’ll also see a UDMA (Ultra Direct Memory Access) rating on CF cards. This number correlates with the speed of a card, and you don’t need to worry about it – it’s basically manufacturer jargon for how they transfer data.

XQD doesn’t stand for anything, and is the latest DSLR card format on the market. You’ll see it in professional DSLR bodies, such as the Nikon D4, although these cameras will also take CF cards too.

When you look at your camera card, you’ll see a speed rating written on it. For the brands which choose to be less confusing than others, it’ll be written like “60 MB/s”. That means 60 megabytes of data are read from the card per second (the speed at which data is written onto the card is slightly less). 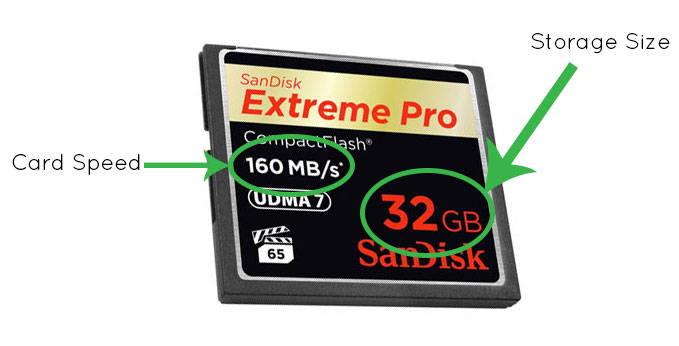 Your camera has a buffer which it fills up with photos you’ve taken that are waiting to be written to the card. Different cameras have different sized buffers, and if your camera takes a lot of photos per second (high fps), you may find your buffer fills up if you are using a slow card. When this happens, you’ll notice the speed photos are taken decrease drastically. The camera isn’t going wrong – it just doesn’t have space to store the new files, so has to wait until it has written more over.

When choosing your camera card, take into consideration the average size of each photo you take and how many frames per second your camera takes. For example, a camera taking 8 frames per second with each file averaging at around 14 megabytes will need a card that is no less than 60 MB/s. This is not an exact science, as it depends how big the buffer is and how many shots you tend to take in a burst. If you’re only taking 3 or 4 at a time, you won’t fill the buffer. But if you are shooting a longer burst of images, you want something fast enough. Ideally, for this sample setup, I would be using a 90 MB/s card.

Some card manufacturers like to make life difficult for its users, and will rate their card speed as something like “400x”. To help decode this for you, we’ve created this table to show you the MB/s equivalent. 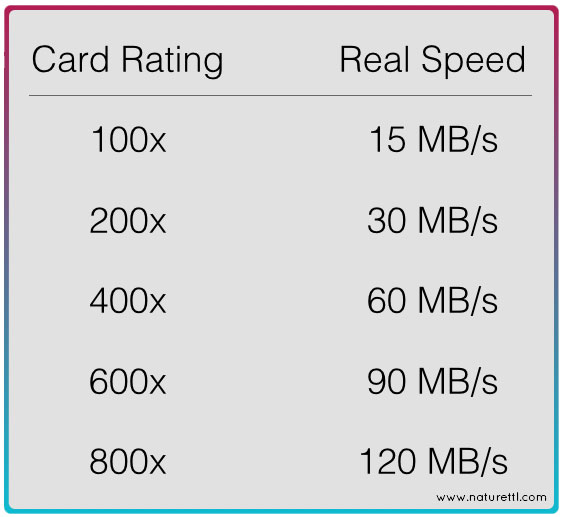 It’s also worth remembering that if you are shooting high quality video (such as 1080p HD), you will need a faster card for that too. Again, 90 MB/s will suffice for this.

The size of your cards is important too. SD cards come in much smaller sizes than CF cards, which can range from 8GB up to 120GB or more. When deciding how big a card to buy, you also need to think about the quantity you’ll be buying. Usually, two smaller cards are cheaper than one card equating to the same total storage space.

Some people like to buy lots of smaller cards, so that their photos are split between different memory cards. The thinking behind this is that if one breaks, you don’t lose all your images. However, you have more cards to keep track of and it could be easier to lose one! Plus, what happens when your smaller card fills up and you are forced to switch in the middle of an exciting event. You could miss a lot of great shots!

I tend to stick to cards of 16GB or 32GB in size. My cameras have two memory card slots, and I use the second card as an “overflow”. That way, I know that when I need to switch card I still have the option of shooting onto the second card if I need to. A lot of cameras don’t have this luxury, however, and you need to decide which combination suits your shooting style.

That said, everyone should have spare cards. Don’t just stick to one card – as there’ll always be times when you find you have filled up even the biggest of memory cards in a shoot!

SanDisk is the household name when it comes to memory cards as they make high quality, reliable cards. If you were to ask any photographer to show you what card he is using, chances are it would be SanDisk. They make both SD and CF card formats.

If you find the faster cards to be too expensive, a good alternative to these is Transcend. They are a trusted brand, and cheaper too! I know photographers who stand by them in even harsh rainforest environments. Again, they also make both SD and CF card formats.

If you’re looking for XQD cards, then you have two choices at the moment. First onto the market was Sony. However, Lexar now make their own XQD cards (although annoyingly still rated in x-speeds and not MB/s).

It can be tempting to buy secondhand memory cards from websites such as eBay, but be aware that they are flooded with fake memory cards. It may look official on the internet, but upon arrival you get a cheap fake. Instead, pay that little bit extra and buy new from a reputable source like Amazon, using the links listed above, or other specialist photographic dealers and trusted retailers.