How to Photograph Urban Wildlife 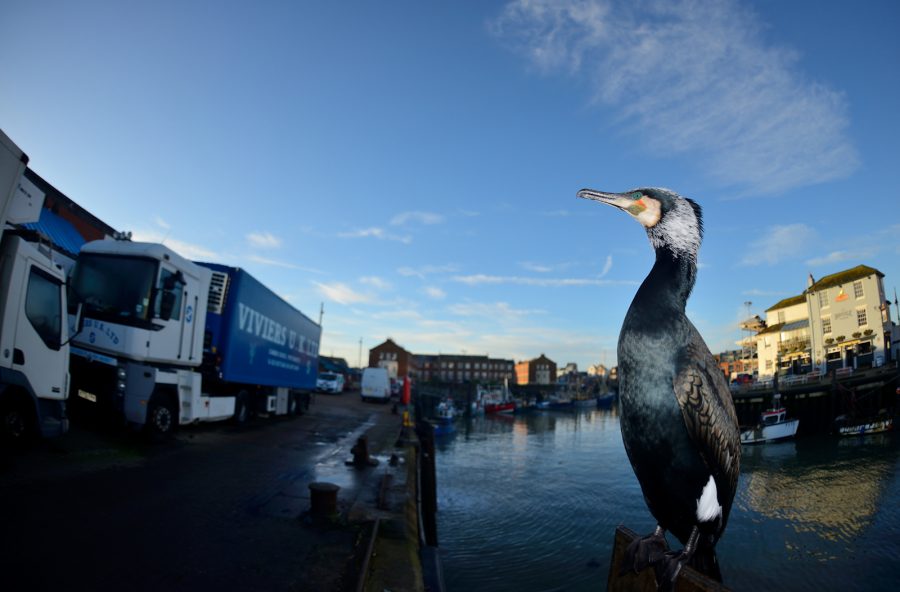 When it comes to wildlife photography, it’s perfectly normal to visit wild places on the lookout for rare and secretive species, but equally there are many birds, mammals and other wildlife that call urban areas their home. Urban wildlife photography is becoming increasingly popular, with many of the large photography competitions having categories celebrating images showing how wildlife is living alongside humans in our towns and cities. 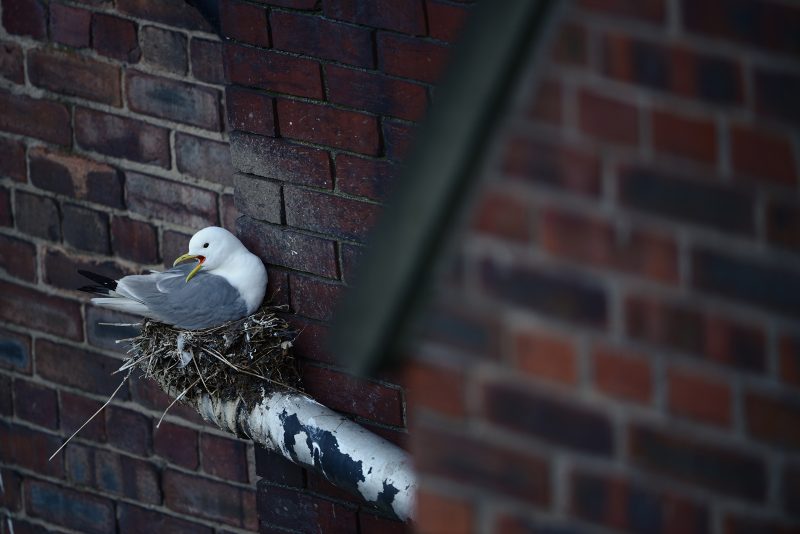 For me, urban wildlife photography can be anything from the frogs in your garden pond to the grey herons residing in the local park, or even the pied wagtails that during winter roost in an airport terminal on the outskirts of a capital city! These animals are truly resilient and should be applauded for just how well they have adapted to this new way of living.

In this tutorial I am going to run through some of my top tips for tackling urban wildlife photography. I hope you enjoy it and can apply some of them to your own work.

Where to find urban wildlife

Towns and cities and naturally are busy places full of people, buildings, and plenty of artificial lighting such as streetlights and car headlights. Within our cities many species such as foxes, pigeons, and rats have adapted to carve out their own corner in these urban areas.

I’ve spent plenty of time in cities taking photos of wildlife, including kittiwakes that nest on the Tyne Bridge in Newcastle, and grey herons and red deer in the Royal Parks of London. 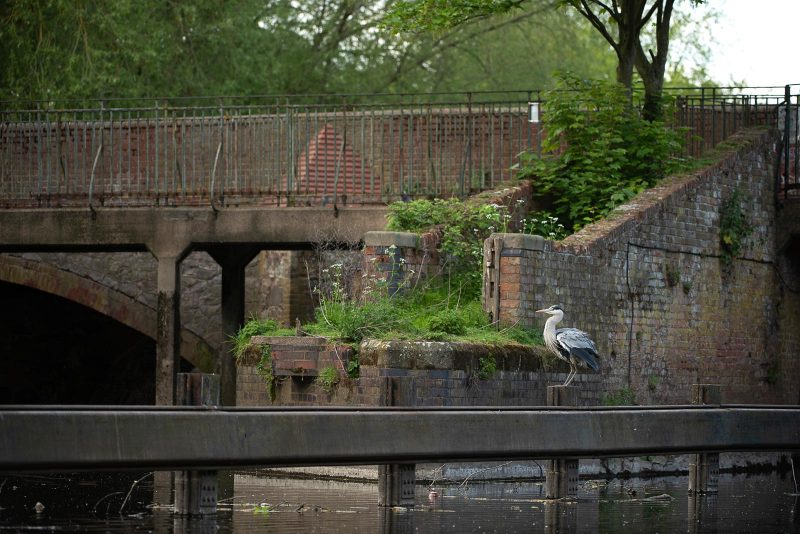 However, urban locations aren’t just limited to the big cities, I’ve found foxes raising their young in a cemetery, a pair of spotted flycatchers nesting in the wall of a church, starlings making use of a supermarket carpark, and an oystercatcher nesting in the grounds of a school! 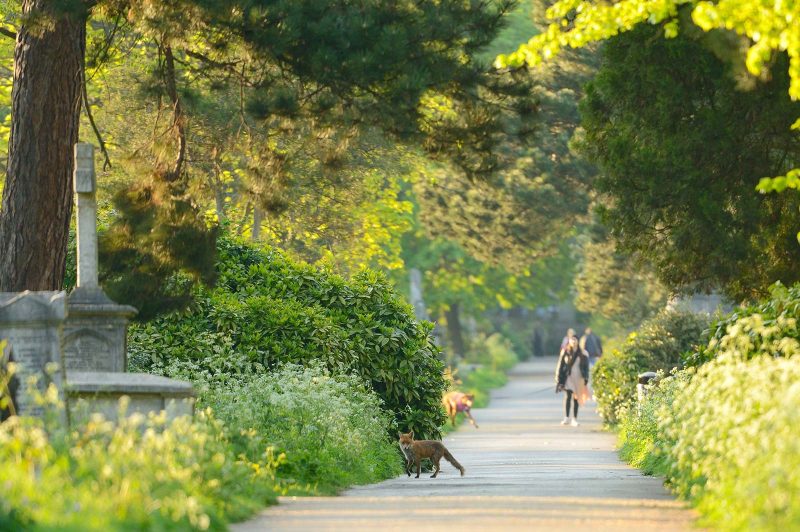 Urban wildlife in the day

The great thing about urban wildlife photography is that traditional techniques can still be deployed whilst creating a unique shot. For lots of my urban shots, I am still using those techniques that I would use to capture species in the countryside, such as using a long lens and throwing out the background, and plenty of my urban wildlife photography is done during the daytime.

For example, with this kingfisher that spent the winter hunting around a town centre. The technique is no different to photographing it in a more wild location, but with the added interest of the bird being perched on a metal railing with car headlights in the background. 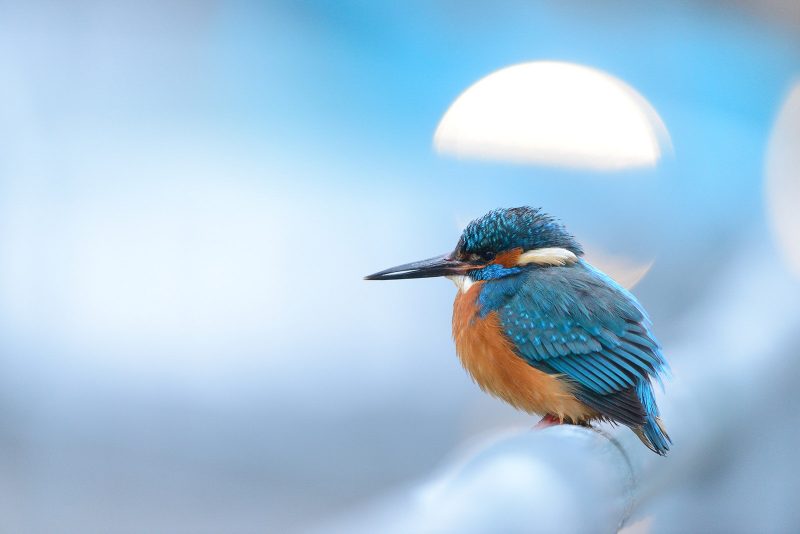 Likewise with the two starling photographs below, a 200-400mm lens was used.

The locations for these starlings are certainly not as you’d expect. One was taken in Camden Market, London – showing the bird perched on a graffiti covered rusty metal fence – and the other is of a bird perched on top of a shopping trolley in front of a popular and busy supermarket. 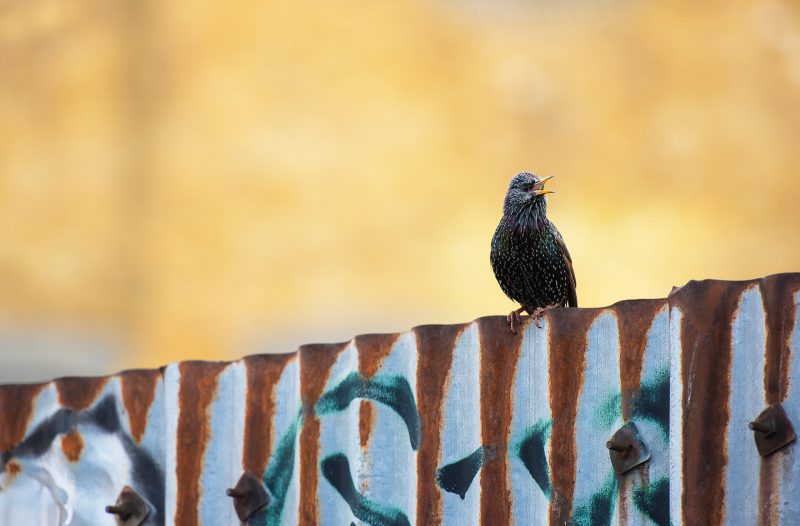 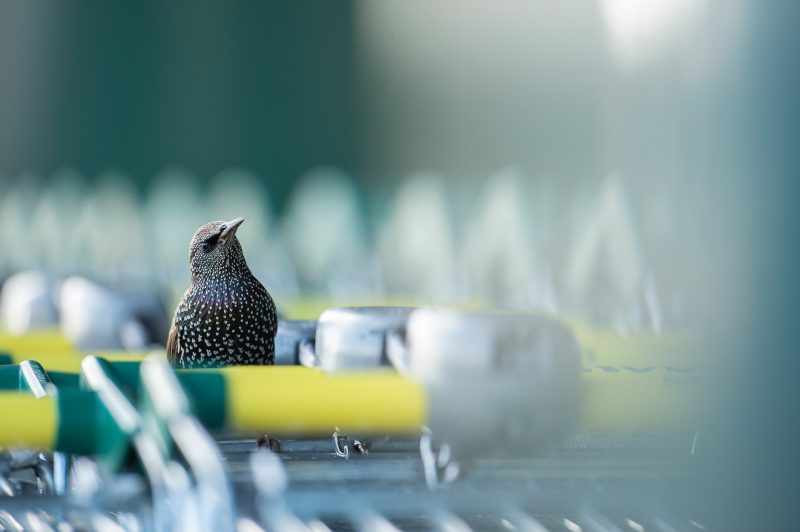 Urban wildlife photography can also allow you to push creative boundaries. These species are found living in landscapes with artificial lighting, meaning often when the sun sets this isn’t the end of your day’s shooting!

This can result in really interesting ways to frame a species or provide backgrounds that you wouldn’t normally have the chance to work with in the wider countryside.

The below image is of a mistle thrush that chose to nest in a set of traffic lights. I took an image of the birds returning to feed their young during the afternoon, but purposely stayed until past sunset to capture the silhouette of the female against the red light as it brooded its young.

This really shows the value of not packing up when the natural light disappears! 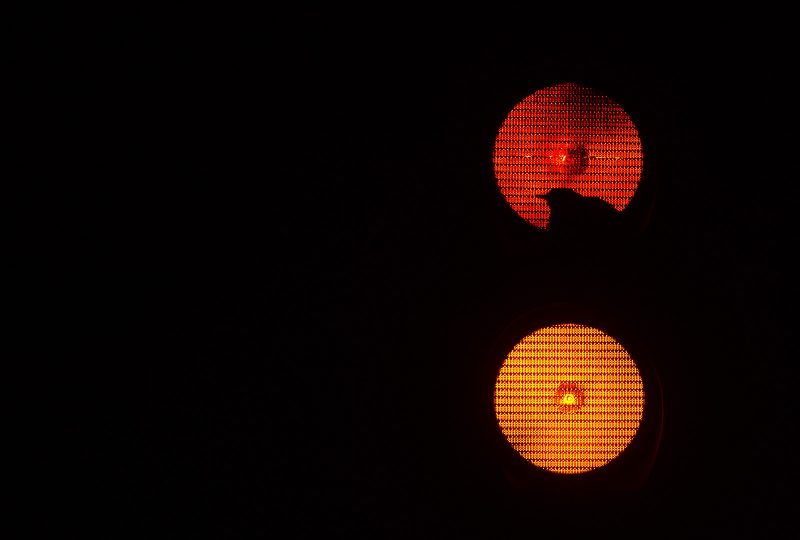 Likewise, with this starling image, these birds were roosting under a pier and previous visits to this location involved shooting the birds as they gathered underneath against the colours of the setting sun.

However, on this occasion I swapped my viewpoint and took the shot facing the other direction, using the lights and colours from a row of houses in the distance. Not only do you have the man made structure of the pier, but also the artificial lights add another dynamic by providing an interesting background. 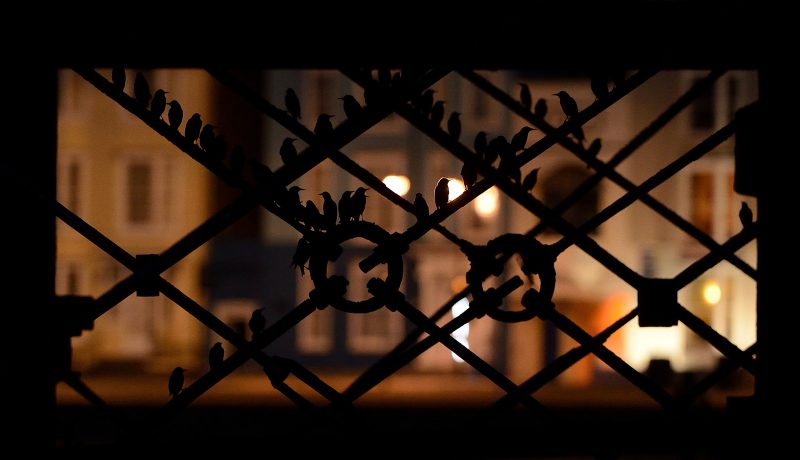 Clearly this doesn’t come without its challenges; be prepared for these low lighting conditions to test your ISO capabilities. I’d always recommend using a tripod in these situations, as it will keep everything steady and ensure that you can reduce your ISO speed a bit and still maintain a decent shutter-speed. I’ve also found the Live View option on my Nikon D810 has come in very handy to ensure I have my subject in focus.

In urban locations, you often find wildlife that is far more tolerant of close encounters with people than they would usually be in more wild locations. These species have often grown up in close proximity to people, meaning they have less fear and their sphere of tolerance is greater – they are “habituated.”

Once you have found a location where your subjects are more bold, you can then start adopting techniques that may not have been possible in other areas. A closer approach can allow you to use a wider lens, meaning you can feature the urban habitat as a complex backdrop. It can also allow you to capture unique and creative angles, such as shooting above or below your subject.

For the below shot, I had heard of a cormorant that was spending much of the winter in a busy harbour. The bird was being fed each morning by the local fishmongers, which meant it was tolerant of people approaching it closely. This tolerance meant that I could not only get close with a wide-angle lens, but also make use of a small amount of fill flash.

I also ensured that I was using a sufficient aperture to bring the background into enough focus to show the bustling harbour.

Read more: How to Photograph Animals in Their Habitat 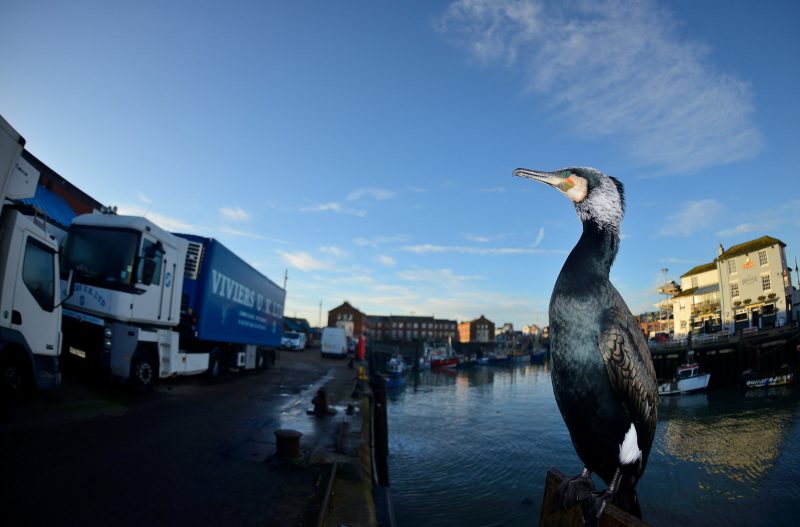 Locations where wildlife and people intersect can also be excellent places to try showing both the animal in question and human subjects in the same frame. By doing this you can really provide a sense of how these animals live alongside us, and adding a human element to the image can reinforce how we need to value the wildlife we share this planet with.

We need to make space for wildlife, and at the very least tolerate its presence. Ideally, though, we can encourage everyone to embrace it. In this next image I was photographing a roost of 1,000 pied wagtail that every winter roost in a set of trees at Terminal 5 of Heathrow airport.

I positioned myself to get the passengers making their way out of the airport in the background, with their busy lives juxtaposed with the birds that were settling down for the night to sleep. 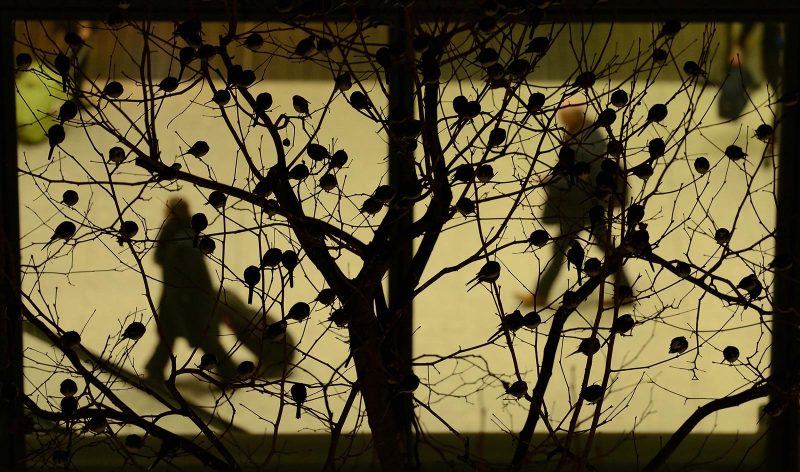 Be wary of where you shoot

Clearly there are risks when you are in remote and wild locations, but even urban locations have their dangers. Be aware of all of the various risks and challenges they can bring about.

Urban locations can be busy places, so stay alert for passing traffic and don’t trespass on private property or take photos in or around sensitive areas, such as schools, without at least checking for permission. Keep hold of your belongings and respect the privacy of other people when including them in your images, and never point your camera into the windows of private residences!

This image of kittiwakes nesting on the Tyne Bridge in Newcastle was taken from the pavement, but right next to a busy road. I had to make sure that I stayed safe in terms of cars speeding past, but it was also a busy place with lots of people walking past.

For this image, I wanted to photograph the birds in the “blue hour” – that magical time between sunset and when the sky goes black. I didn’t want to use flash on this occasion as it may have spooked the birds and they were nesting, so it didn’t seem ethical.

However, these birds are used to people and the lights of the city including cars, so I made use of a small LED light placed on top of my camera and used it on low power. 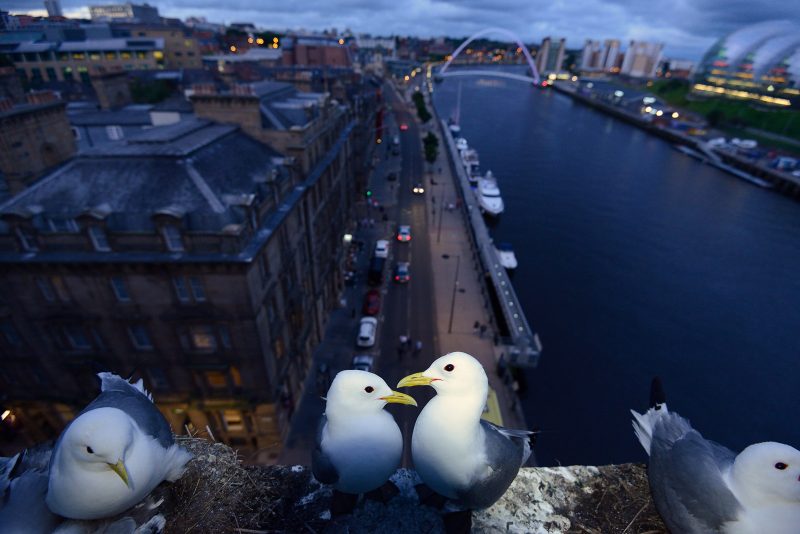 For me urban wildlife photography will always be something I am happy to dip in and out of. There are some really excellent photographers out there who are specialists in this field, and there are some truly wonderful urban images out there too!

I enjoy heading to the city for some photography just as much as I might get excited about spending time in a reed-bed or on a heathland. So whilst I am not an urban specialist, I like to think that I can at least adapt to the hustle and bustle of a city and, if I am honest, I’d much prefer heading to an urban environment for some wildlife photography than I would a night out in a bar or club! 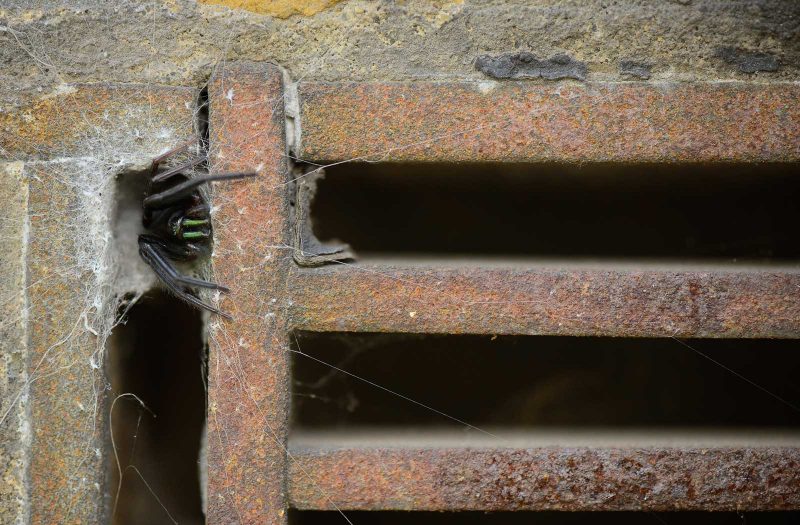