How to Photograph Tawny Owls 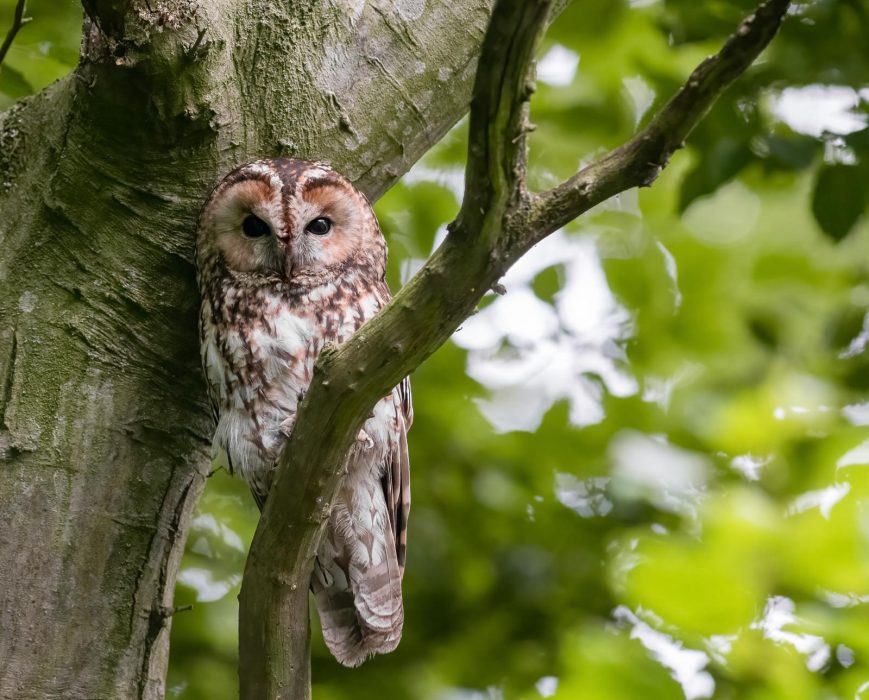 For as long as I can remember, I have always been fascinated by tawny owls. This interest was triggered when my dad gave me a copy of the Reader’s Digest Book of British Birds. On the front cover was a stunning illustration of a tawny owl showing off its mottled plumage of dark and chestnut brown and, of course, its unmistakable deep black eyes.

In this article, I’ll share some of my best tips for photographing tawny owls.

Calls and habitats of tawny owls

Tawny owls are highly nocturnal and are often heard but rarely seen, which is probably why they were the final of the five British owls I managed to photograph. From late autumn through winter, the owls are most vocal. The male can be heard with its territorial and elongated “hu-hu-ahooo” call, to which the female responds with a “keewick”.

This is a positive sign that a mating pair are in an area. Tawny owls are most commonly found breeding in wooded habitats, as well as urban parks and large gardens with mature trees. 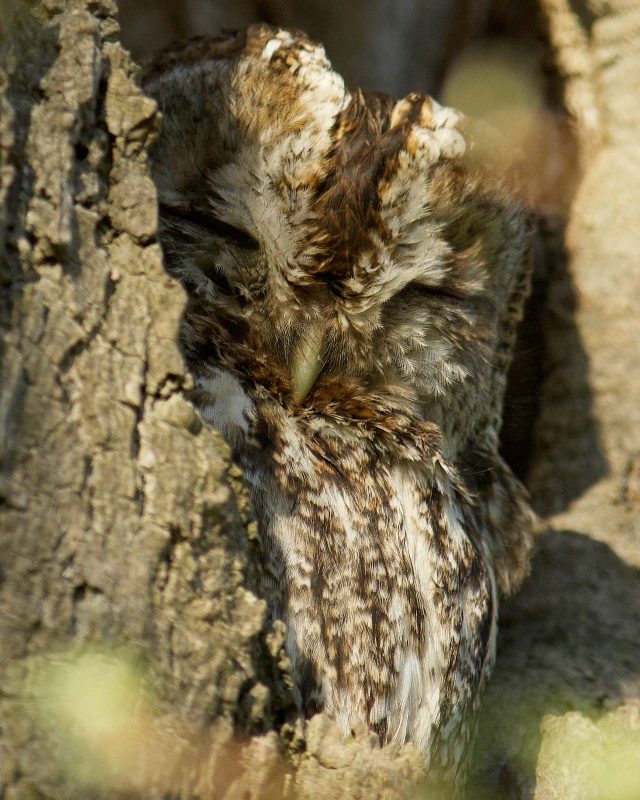 Finding a tawny owl is a daunting and difficult task. Firstly, you need to make sure they are present in an area, and the smaller the wooded area the better. It will increase your chances of an encounter and make it easier to note down the behavioural patterns of the owls.

Listening for calls is the easiest way to know tawny owls are present. As soon as you are confident that a pair of owls are present in your chosen woodland, you will need to devote sufficient time to trying to locate them.

Walk the woodland at dawn and dusk as frequently as possible. Tawny owls are surprisingly small in size when perched, about the size of a wood pigeon, so they can be easily missed. They prefer to perch close to tree trunks, utilising their effective camouflage to blend in with the bark. 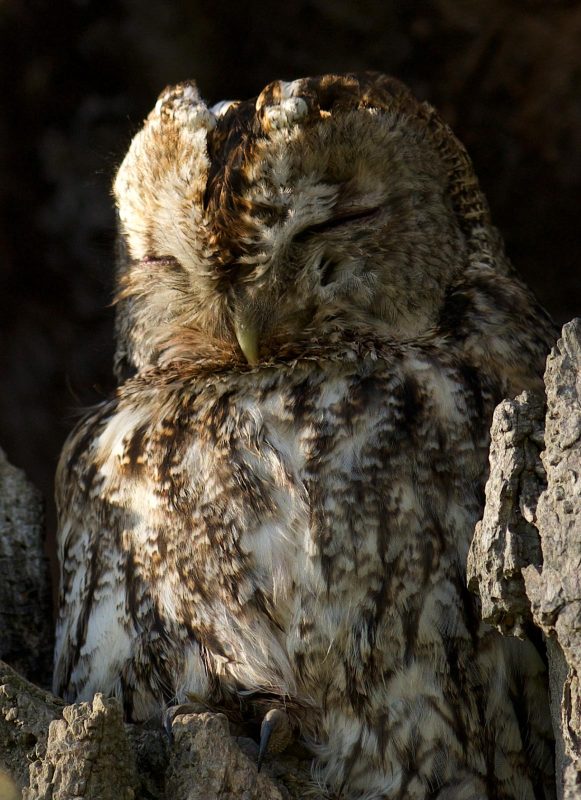 It’s also worth noting down potential nesting sites in the woodland. Look for signs of pellets under tree cavities or close by them, together with the more obvious white wash of liquid faeces deposited under popular roosting locations (these don’t have to be tree cavities).

Roosts can be any place with thick vegetation where an owl can hide away to sleep. If you’re lucky, you may find an owl roosting at the entrance of a tree hollow, soaking up some early morning sun.

I have found the easiest time to find tawny owls is when they are tending to young. Depending on prey availability, the parents may have to hunt earlier in the evening to feed the hungry mouths.

Listen out for alarm-calling birds

It’s fair to say other birds do not like tawny owls much. If a tawny breaks its cover in daylight, it is generally mobbed by multiple bird species, making a lot of noise as they do it. These alarming birds may be looking after their own young, so will get very distressed by the sight of a tawny owl throughout spring.

But, the sound of multiple panicked blackbirds is almost like someone dropping you a pin for the exact location of a tawny owl. This is how I have located the majority of my adult tawny owls. 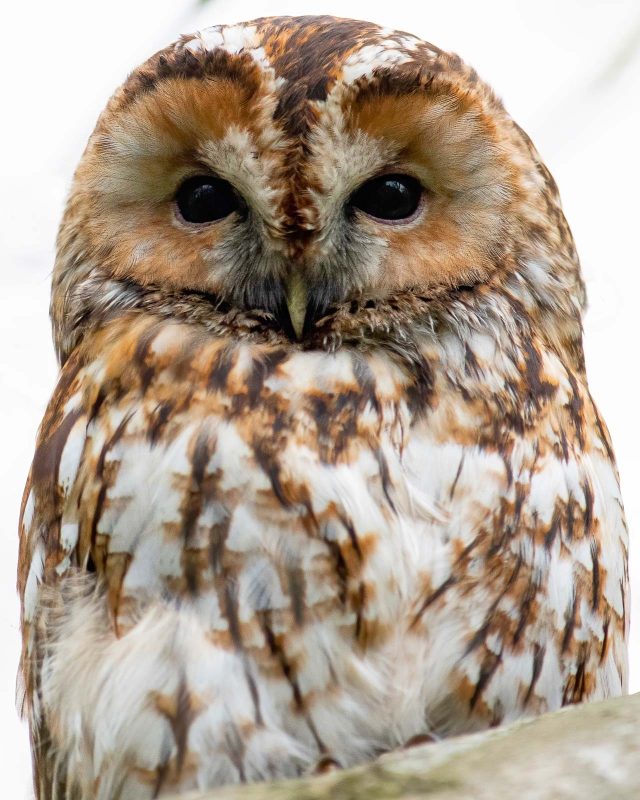 Once I hear what can only be described as an explosion of bird calls, I walk very slowly to the area, paying attention to the direction in which the birds (mainly blackbirds) are focusing their angry alarm calls. This will generally give you a very good idea of the location of the owl, and has provided me with great results.

The next challenge is finding a clear view through the trees without spooking the owl. I have found that, when a tawny owl is being harassed by smaller birds, it is usually quite tolerant of your presence and doesn’t spook easily. So, move slowly with no sudden movements, and the tawny owl may just sit long enough for a few pictures.

Tawny owlets also make for great photographic subjects. Clutches of two to three eggs are laid between March and April. May to July is the time of year I have been most successful in my attempts to photograph tawny owls. The young owls make unmistakable begging calls, which sound kind of like a squeaky toy being stood upon.

Walking around a woodland at around 8-9pm provides a good opportunity to listen out for their begging calls. In my experience, newly-fledged owlets stick together and tend to stay high in the woodland canopy, awaiting the adults who will drop off food. 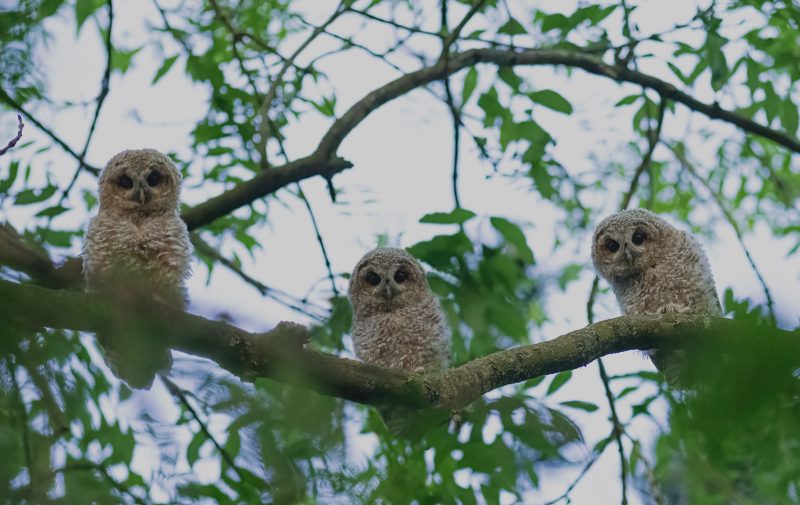 This is a good opportunity for shots that will encompass the environmental setting. A useful method to help you with composition is to use the trees as ‘leading lines’ up to the owls in your shot. This can help give your image more depth.

As they develop, the young owls get more adventurous, coming down from the canopy in search of their own prey. Still begging intermittently for food, this is a great time to attempt to get some closer portrait images of them. Tuck yourself away, close to the calling birds, and wait to see if one is kind enough to show itself. 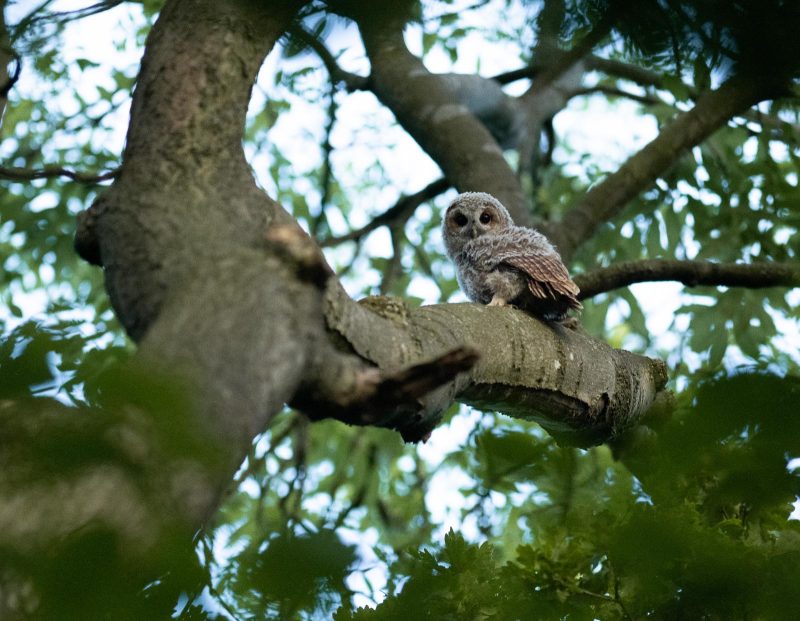 Be prepared to test the limits of your camera, as 9pm in a woodland can be devoid of light. Don’t be afraid to pump that ISO up! A noisy image is better than a poorly exposed image, or no image at all. There are many noise reduction tools available to help with this once you get home. I use Topaz DeNoise, which can work wonders.

In terms of stabilisation, I generally shoot handheld or with a monopod, in order to scale down my equipment and make it easier to walk through woodland quietly. I find tripods a bit clumsy for woodland work.

Leaning against a tree with your camera’s vibration reduction on can also assist when shooting in low light, and therefore help lower your shutter speeds. I have shot as low as 1/15th of a second to get a well exposed image (yes, it was that dark).

I often find myself photographing tawny owls in low light, so I use a 300mm f/2.8 lens, which I shoot mostly wide open. I don’t find the shallow depth of field a problem, as long as you are focused on the owl’s eyes. In my opinion, this is the most interesting part of the image in all owl photography anyway.

This shallow depth of field also helps isolate the owl, which will normally be perched in an area with a busy, distracting background of branches and leaves. 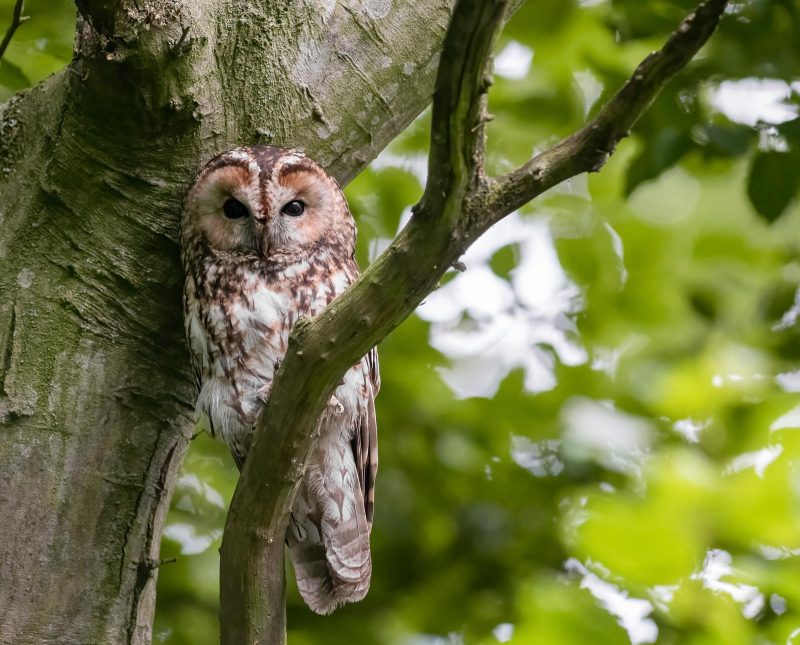 During early morning or evening in a woodland, light can be limited, especially in the UK. If you are lucky enough to find a tawny owl that’s in the open and in good light, use a higher shutter speed for a better chance of a sharp image.

90% of the time, my tawny owl sightings occur when the light is most challenging. The bonus is that the owls are usually perched or roosting, and therefore not moving a lot. This means you can get away with lower shutter speeds: between 1/50th and 1/400th of a second in my local woods is normal, and anything upwards is a bonus.

It might be tempting to use flash to help with the poor light in woodland. However, I do not encourage this, due to the reaction of a tawny I witnessed on one of my camera traps. The camera trap was originally set for a badger crossing a woodland stream. I had also set up a trail camera nearby to see the badger’s reactions to the diffused flash.

The owl landed in this setting, triggered the flash, and was immediately spooked and flew off. As a wildlife photographer, I consider knowingly disturbing the subject as bad etiquette. Using even a soft diffused flash, like in this example, did just that.

I do not encourage using flash on owls. However, I feel this image gives a good view of a tawny in its classic habitat, even though it was accidental.

Finally, don’t be disheartened if, at first, you don’t succeed with photographing tawny owls. As you put the time in, the shots will come. Try and learn the patterns of roosting spots, the times at which you most often see the owls, and any areas where you have seen them be active.

The time and effort is all worth it when you get those amazing black eyes staring into your lens!