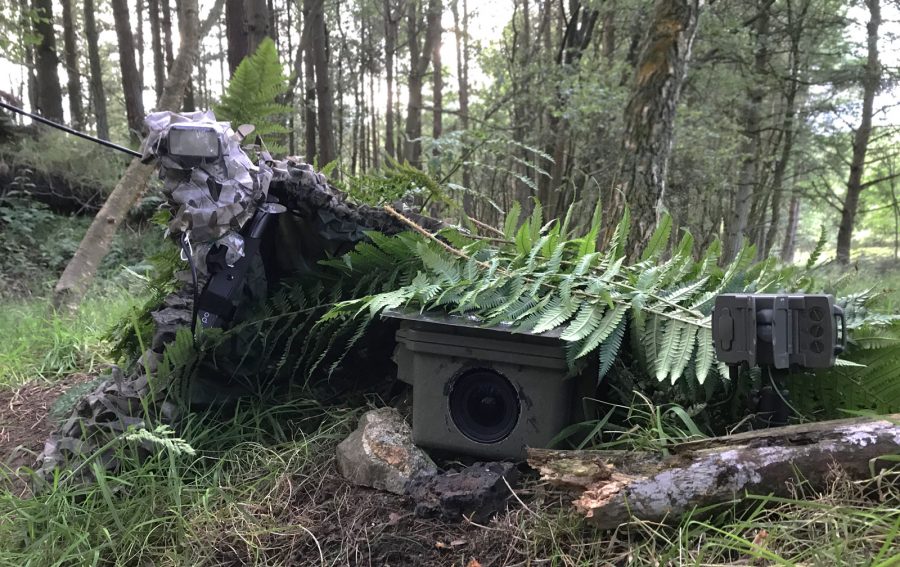 Camera traps are becoming incredibly fashionable, and it opens up a whole new unseen world to wildlife photographers. In fact, I’d go as far as to say that camera trapping is extremely addictive. The entire process, from setting up your DSLR camera trap to checking it weeks later for the results, has a real thrill about it.

However, it’s also one of the more tricky styles of wildlife photography. Some people may say that “the camera does all the work,” but a good camera trap photo comes from a very different story. Capturing something that is aesthetically pleasing and unique is difficult, and the task is arduous at best.

We’re not talking about using something like a Bushnell here. Wildlife photographers will set up camera traps using DSLR cameras, with infrared triggers setting them off. If you aren’t sure about what a camera trap really is, check out the following article: How to Make a DSLR Camera Trap Housing.

Here are some tips for improving your wildlife camera trap photos.

Any good camera trap setup will use some sort of artificial lighting. Lighting is subjective, but in my opinion the best camera trap photos of animals will be lit to look natural. In an ideal world, a viewer should find it difficult to work out how exactly you lit the shot.

Learn about the principles of flash, including studio lighting setups, to work out how best to light your scene. If you’re just using one flash at the moment, then you should consider introducing at least one (and most likely more) flashes into the shot. You’ll end up with, probably, a lot of wires… but the results will be worth the job of untangling it all at the end.

Sometimes you might be able to utilise natural light, or combine it with artificial light, to produce something really special. This will be tricky, though, and require you to know the position of the sun and work out where you should point the camera at peak times of activity.

We have some tutorials on using flash with wildlife that should be helpful here:

#2 Look for regular paths and bottlenecks

Camera trapping is all about predicting where your subject might be, and “forcing” them into the composition of your image. Walking through a forest, for example, will allow you to spot “runs” in the grass. This tends to be a thin line of compressed blades of grass, showing you the regular path followed by an animal.

This is a great place to start. Follow this trail until you find your target species’ location. That might be a burrow, den, or areas where deer have been sleeping. Along that trail, look for “bottlenecks” in the trail. This might be areas where animals have to pass through a particularly narrow passage, and that forms an excellent place to set up your camera trap.

Finding a bottleneck means you can accurately predict exactly where the animal will be positioned, allowing you to properly compose and set up your shot. You can adjust your lighting, composition, and other creative elements of the photo knowing that your subject is forced into one position.

However, the only thing you can’t control is the direction in which the subject walks past!

If you’re setting up your camera trap for a long time, you’re going to be relying on it not breaking. Weather, humidity, and even animals can cause real problems for a camera trap.

Ants, for example, will work there way inside your camera trap (particularly in jungle environments) if you’ve left any holes. By then, it could be game over for the crucial wires and connections. Humidity is the other big killer, and electronics will not last for very long in humid conditions or a good British downpour.

The key? Seal things well. A good, weather-proof duct tape is your friend here. It will ensure that you keep moisture and wildlife out of your camera trap.

Read more: How to Build a DSLR Camera Trap Housing

But it’s not just sealing things. Ensure that you’re using good quality connectors, cables, and other elements in the camera trap. Ensure that you have spares to replace this, yes, but you should make sure nothing is under unnecessary tension. For example, if you have cables pulling against their connections to the camera, it is likely things might come free or break. If your camera trap loses its connection, you might return weeks later to no images!

It can be very, very tempting to continually check your camera trap. But every time you visit the trap, you’ll be contaminating it with your scent and disturbing the area in general. Instead, leave it be for as long as possible. Work out how long the battery will last, and resist the temptation to keep checking your setup.

Worried about how the shot will look? Run some test shots and do your best badger or bear impression to see how the final image will look with a furrier subject. Then you can be confident that things will be working well whilst you’re patiently twiddling your thumbs back at base.

Lots of people have used camera traps with big cats, but how about something a little different? You can capture something totally unique on a wide-angle lens of even the most “common” subjects, provided you think carefully and create an interesting composition.

Thinking outside the box is key in all types of photography, but particularly when camera trapping. The image above, taken by Will Burrard-Lucas, uses infrared light to capture a black and white photo of a barn owl at night. Genius!

#6 Think about your infrared trigger’s position

There are two types of infrared sensors. PIR (passive infrared) sensors will respond to a change in heat signals in front of it. They’re less accurate, and have quite a wide field of view. You can limit this view by applying “blinkers” onto the side of the sensor. They are great, though, because they only require one device and are easy to hide out of view.

AIR (active infrared) sensors produce a beam, like a trip wire, that an animal triggers when it breaks it. This means you can be very precise about when the camera is fired, but they require two devices (an emitter and a receiver) so hiding them out of shot is harder. Plus, they are more fiddly to set up (and expensive).

Whichever system you are using, though, don’t just put the sensor next to the camera by default. Think about its position, and what that means to your image. If your sensor is next to the camera, you’ll end up with images where the animal is too far away, and you’ll potentially scare it off before it gets close enough.

When positioned away from the camera, pointing across the scene, you’re able to be more accurate about when the camera fires and therefore dictate the position of the subject in the frame.

#7 Consider the benefits of wireless vs wired

It is possible to set up a camera trap using a wired or wireless system. Wired systems have physical cables connecting the flashes to the camera, whereas a wireless system works without such connections.

Wireless systems have clear benefits. Firstly, wires are less likely to be pulled and tugged by the elements, falling branches, and even animals. This means that your camera is less likely to be moved and have the composition adjusted, or even worse have the flashes disconnected. Whilst this isn’t a common occurrence, having no wires makes the system less fiddly.

Some animals will also be deterred by the wires if they are dangling at head height. Therefore, if using a wired system, you must ensure wires are discrete and not causing potential issues for animals approaching the area.

In my own experience, using wires means replacing more parts. The equipment I have worked with – which seems to be the kit that most camera trappers end up using – involves connections that are poorly built in cheap products. The continuous plugging and unplugging of wires, and the general wear and tear of being used out in the field, has meant a number of these connectors have broken reasonably quickly. I have found myself replacing them more than I’d like, and it has deterred me from using wired systems in some situations.

Wireless systems may seem the natural way to go – although they are more expensive – but they also mean reduced battery life in most cases. Therefore, you must consider how often you can come to your camera trap and replace the batteries. If that’s reasonably regular and doesn’t involve miles of hiking, perhaps wireless is the way forward.

#8 Be patient when camera trapping

Camera trapping is not easy, even for experienced camera trappers! Don’t give up after your first shoot, and instead be persistent. You might have everything set up perfectly, but unless the animal is used to the camera trap system and behaves naturally, results will be limited.

Experiment with your flash positioning and power output, as well as the position of your entire camera trap system. Keep at it, and eventually the results will come. Camera traps are an ongoing project, and definitely not a quick means to getting great photos. They take time and patience, but those that hone their camera trapping skills will be rewarded greatly.

Camera trapping is an incredibly fun, addictive, and unique way to take wildlife photos. Wildlife camera traps are relatively commonplace in the industry now, but the images are still very impressive when taken by someone who really knows what they are doing.

Have you been camera trapping? Share some of your photos in the comments below!