How to Photograph Spring Coastal Flowers in the UK 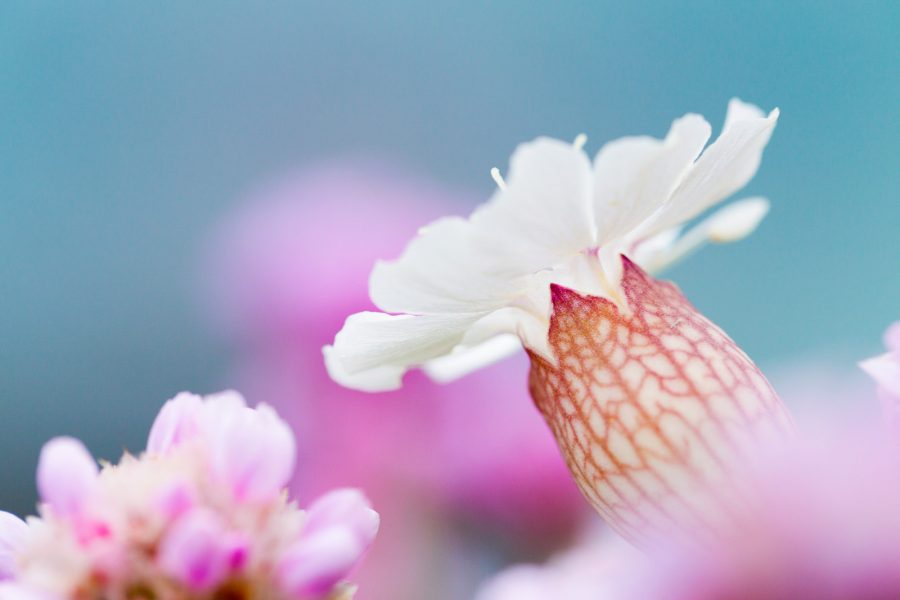 These are just some of the features we can find as we explore the coast of the UK, but look carefully in the foreground because here we have a very long, narrow nature reserve bisected by the most special public right of way in the country: the coast path.

This “nature reserve” is a place where wildlife thrives and in spring it is here that we photographers can find colour to enliven our images. These flowers not only offer beautiful individual subjects for us to capture, but often a much wider expanse of colour and form which will fill the foreground of our landscape photos.

When to look for coastal flowers

The exact timing of the peak of colour will vary around the country as different species bloom at different times. Generally, flowers bloom earlier in the south and the first showy species begin to flower at the beginning of April.

The peak of colour in Cornwall is around mid-May, when most of the spring flowers can be seen. In Northern Scotland, springs are later and for the greatest colour I would suggest mid-June, which is useful as it coincides with the greatest activity of bird life as well.

Flowers can be found all around our coastline in every habitat, but generally I would say that “west is best.” This is because the west of the UK tends to be more dramatic with cliffs, islands, sea stacks etc. The shallow soils and stony ground associated with this type of coastline tend to inhibit the growth of grasses, allowing wildflowers more space to flourish.

Cornwall, Devon, Pembrokeshire, and Anglesey all offer fantastic opportunities for coastal flowers and great scenery. Further north the islands of the west coast of Scotland are all amazing, and the Orkney Isles are also very productive. Dorset is wonderful, but being on chalk and limestone it has a very different feeling to the other places that I have mentioned.

Learn more: How to Photograph Flowers in a Landscape Scene

What types of spring flowers can you find on the UK coast?

Being a naturalist as well as a photographer, I think we should all study the subjects that we photograph. It is only by knowing our subject that we can reveal its true beauty and function.

Here are four species which can be found growing in abundance in the right places:

Thrift begins flowering in late April and peaks in mid-May (in the south of the UK) to mid-June (in the north). It has small pink (only occasionally white) flowers which grow on the tops of small erect stems. A mass of flower spikes emerges from pillow-shaped, springy mounds which are designed by the plant to hold in moisture.

The flowers are quite dry and even when they go to seed remain attractive, particularly when backlit. Its leaves are needle-like, designed to avoid the loss of water in an environment which is often dry, salty, and windy.

Thrift can be found growing on rocky coasts as well as estuaries. Despite its pretty appearance, this is an extremely hardy plant and is often one of the first to grow on contaminated ground, such as the old tin-mining sites in Cornwall. For this reason it is classified as a metalliferous species along with heather and gorse.

This species flowers a little earlier than thrift, starting in late April and peaking in early May (in the south) having some cross-over with thrift.

It is a prostrate, sprawling plant with silkily hairy stems. Its flowers are normally yellow but various colour forms are found on different soil types, with red and orange being the next most common.

The flowers are carried in heads and, interestingly, each head is split in two with one half flowering a week or two before the other. This evolutionary strategy has been developed to give the flower a better chance of being pollinated by insects.

The plant was named because each half of its flower head forms the shape of a kidney. Kidney vetch is most common on rocky coasts but is also found on dunes.

Of all the species mentioned here, this one has the longest flowering season. It starts in April and lasts all the way through the summer, but the peak is in spring – usually aligned with thrift.

It has large white flowers with five notched petals and a deep bladder-like calyx tube, which has a beautiful pattern, behind the petals. These flowers occur in patches; the plant has slightly downy stems and greyish-green leaves. It occurs anywhere on the coast, most commonly on rocky ground but also on shingle beaches.

This is the least common of the species mentioned here, being found mostly on west-facing coasts of England and Wales as well as being scattered around the coastline of Scotland.

The earliest of all these featured species, spring squill begins flowering in late March and is usually done by mid-May (in the south). It has bluish-violet flowers occurring in a cluster at the top of its short stems. Its leaves are quite narrow and grass-like, but they are fleshier than grass and often curve and curl, rather beautifully close to the ground. Spring squill grows on short grassland close to the coast and can occur in large numbers where the habitat is suitable.

5. Others to look out for

There are plenty of other species to look for. Of the rest I would pick out a few for a brief but special mention: the Oxeye Daisies that grow around our coastline are the genuine article, not the over-sized cultivated variety that we see on road side verges.

Dune pansy is a beautiful small flower found growing on some dunes in late spring. Common dodder is a parasitic species which grows on gorse forming a macabre-looking red net in spring and summer. Finally, in the north of Scotland I am always pleased to see oyster-plant on shingle beaches and rose-root on cliffs.

Light is the key

Sometimes I will take a trip to photograph flowers on the coast with a pre-determined plan. At other times I might be having a walk with my camera and respond to the situation I find myself in.

Generally, if it’s cloudy, I will take close-up photos – the diffused light allows me to show more detail in the subject. This type of photography tends to be most useful for identification shots, so I will look for the best example of a flower and try to capture it with some of its leaves. The best lens for this purpose is the 100mm macro, and I often use a reflector to cast a bit of light on the under-side of the flower.

When looking for details to photograph, don’t overlook the various shapes and textures of the leaves. Thrift leaves can form wonderful patterns and squill leaves are shapely too. Don’t forget to get down low and try to set the stems of the flowers against a dark background which better reveals the furry nature of many of these plants.

On sunny days I will tend to shoot wide-angle, showing the flowers and the scenery together – but for this you need a dense patch of flowers. If I find a good spot I will try to hang around or return at sunrise or sunset when the sun is lower in the sky.

The low angle of the sun will help to pick out the shapes of the plants; this is particularly true of thrift which has distinctive pillow-shaped mounds. The low sun also casts its warmth on the flowers, bringing out their colours more effectively.

For this type of photography I use a 16-35mm lens, getting as close to the subject as I can whilst managing to get foreground to background all sharp.

I reckon by using f/16 and a 16mm lens, I can get everything sharp from about 80cm to infinity – though hyper-focusing isn’t an exact science. Remember the 80cm is from the subject to the sensor (not the front of the lens), so this is usually close enough for large patches of flowers.

For those that want to get even closer to foreground flowers, or who want to use a slightly less wide-angle lens but still want to achieve sharpness from foreground to infinity, there are two options.

One is to purchase a shift and tilt lens, and the other is to use focus-stacking. I am resisting the shift and tilt option because I already have a full camera bag and empty bank balance, but I have played with focus-stacking. My advice on focus-stacking is to use a small aperture, overlap the focus stacks more than you think you need to and pray that the wind doesn’t blow the flowers around in the foreground during the procedure. 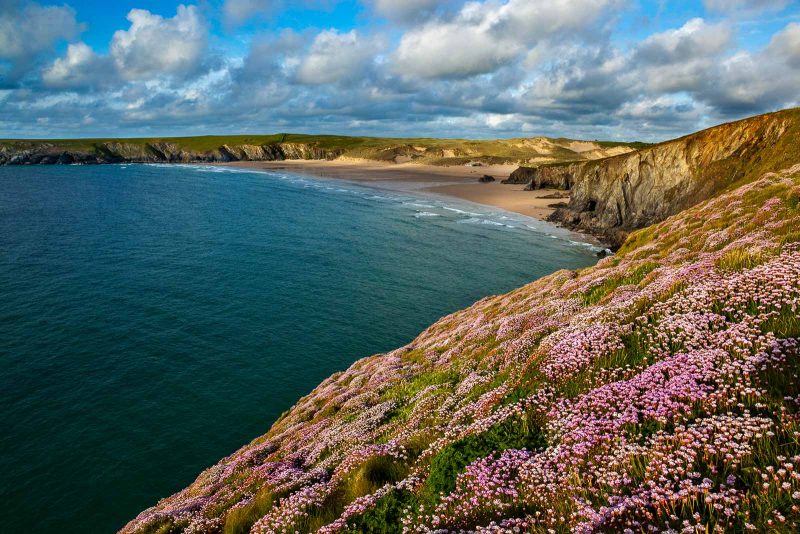 For wide-angle landscape shots of flowers, I will invariably use a tripod; one which gets down to ground level. I prefer to use LiveView and a remote release and usually add a neutral density graduated filter to tone down the bright sky.

If time permits and the light stays good I will often add a 10-stop neutral density filter to see if that gives me a more artistic image. Usually, my aim with this is to blur the clouds and the sea rather than the flowers so it needs to be a calm day.

I likened the coastal strip to a long nature reserve and that is true: there are plenty of wild animals that make a home in this habitat, especially in spring when conditions are favourable.

In the north and west of Scotland, as well as parts of Wales, Northumberland, and even the south west of England, it is possible to find seabirds in amongst coastal flowers.

The Orkney Islands are wonderful for photographing fulmars amongst thrift in June. I have photographed puffins, and other sea birds, in spring flowers on Skomer, Skokholm, The Farnes, Shetland, and the island of Lunga to name but a few. In Cornwall, we have slightly fewer opportunities for seabirds but anything looks good in flowers so I have enjoyed spending time photographing rabbits, butterflies, and other insects in thrift.

Even without flowers our coastline is amazing for photography, but in spring we have a unique chance to combine nature and landscape in our images.

I’d love to say that every time I go out to photograph coastal flowers in spring I come back with award-winning photos and though I can’t claim that, I can say, hand on heart, that I always come back feeling up-lifted and happier.

Our hobby of photography isn’t just about taking photos. Did I just say that?!