How to Photograph Bluebells 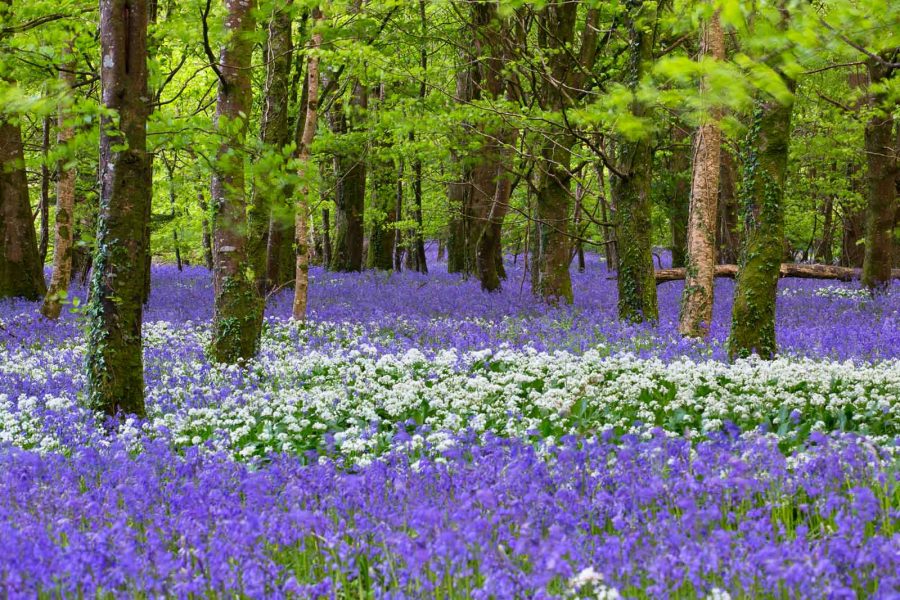 Around the world we are lucky enough to have many wildflower spectacles. Living in Britain, I always look forward to spring and the chance to enjoy the fresh growth and abundance of flowers that this vibrant season brings with it. Top of the charts is the bluebell, a flower which is beautiful individually but even more stunning when seen carpeting a woodland.

Anyone in the UK could be forgiven for thinking that the bluebell is a very common flower, but no. Globally it is rare; only found in north-western Europe, and some experts estimate that Britain holds between 30% and 50% of the world’s population of this pretty flower. It enjoys the temperate, damp climate and is typically a plant of undisturbed deciduous woodlands where it flourishes before the trees develop foliage which will darken the ground beneath.

As a bluebell wood is so beautiful, we all have very high expectations of bluebell photos and for that reason our task as photographers is challenging to say the least. But, as with all aspects of photography, a bit of forethought, planning, reflection and discussion will help us all to get better. So here are a few of my thoughts on the matter.

A date for the diary

It’s impossible to predict exactly when bluebells will reach their climax. To some extent they are influenced by the length of the day which remains constant from one year to the next, but weather conditions through the early spring will have some impact on their emergence and growth. Their peak also varies across their range.

Where I live, in the south west of England, bluebells tend to peak in the first week of May. Further north within the UK they emerge later with northern Scotland enjoying bluebells in late May and even as late as mid-June. 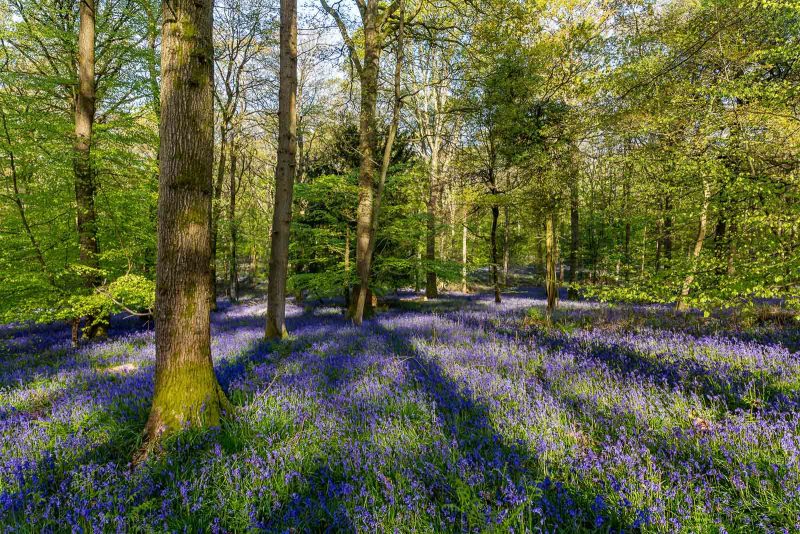 I don’t have space here to list every good bluebell site in Europe, or even just in the UK, but thankfully they are very popular so it is relatively easy to find locations close to you by doing a search online. I will say that the best place I have ever seen for bluebells is in the Forest of Dean near the minor road between Upper Soudley and Blackpool Bridge.

On a more general note I would also like to say that bluebells don’t just occur in woodlands. They can also be found at many coastal locations and in meadows, particularly where stands of bracken grow up to shield them from the desiccating impact of the summer sun.

Read more: How to Photograph Wildflowers

For example, St Martin’s on the Scilly Isles has masses of bluebells in some of its arable fields in late April (admittedly some are Spanish bluebells); the island of Skomer in Wales can be a riot of bluebells in late May, and in Cornwall we have a wonderful bluebell meadow in the parkland habitat at Enys Garden near Penryn, usually peaking in early May. 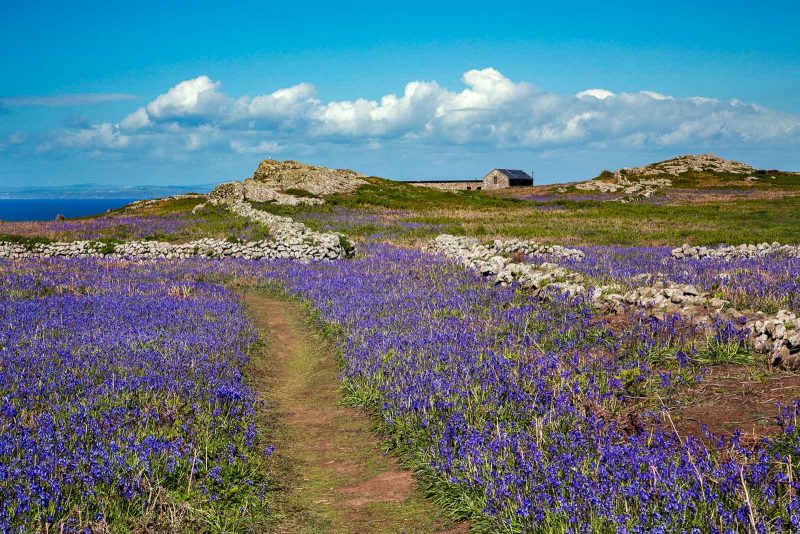 Before we start photographing anything we should know the law regarding our subject. This will vary in different countries, but within the UK all flowers are protected to some degree by the Wildlife and Countryside Act of 1981. It is illegal to dig up any wildflower on land which is not your own and some species of flower, including the bluebell, are listed in Schedule 8 of the Act making it illegal to pick any of the flowers.

As you walk into a bluebell wood, you may notice that the best bluebells always seem to be a little way in the distance. But when you get there they are still further away. There is a mathematical explanation for this and it is all about angles. The further you are away from the bluebells, the smaller the angle between your line of sight and the ground (assuming it’s level) and so the more tightly packed the bluebells seem to be. Instead of constantly walking and being disappointed, try getting down lower; it might save you a lot of time and energy.

Height of view is important. Too high and the bluebells are separated by gaps; too low and the carpet, though dense, might be too narrow to fill the frame – so experiment. I always use a tripod, which makes me think more carefully about compositions, and I usually use a wide angle with a small aperture to show as much as possible and maximise depth of field. 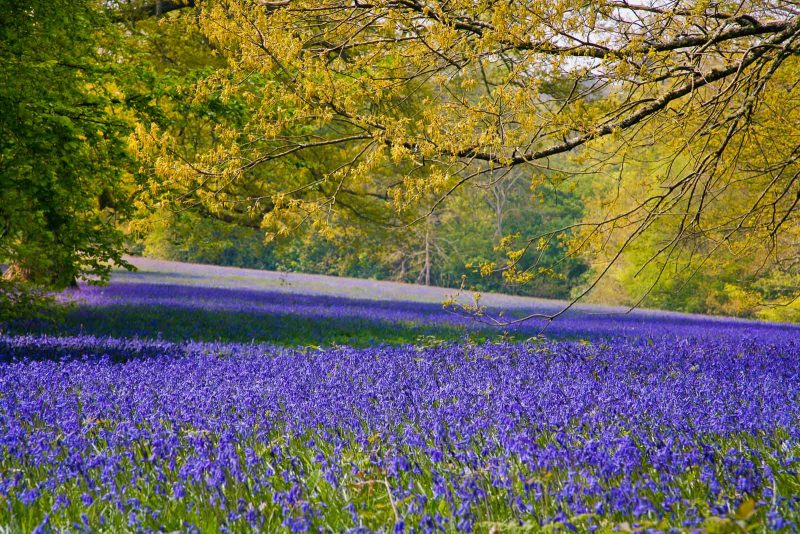 You might think that a carpet of colour is enough to make a great photo, but it usually isn’t. Look for a composition of paths, fallen logs, ferns, beech leaves or maybe a second type of flower such as ramsons, to give a colour and textural contrast. Focus on the secondary object and allow the bluebells to fill the rest of the frame.

Overcast conditions can work quite well with bluebell photography, but full sun in the middle of the day creates too much contrast and washes out the colours and leading to poor results. The best light is always at the start or end of the day. 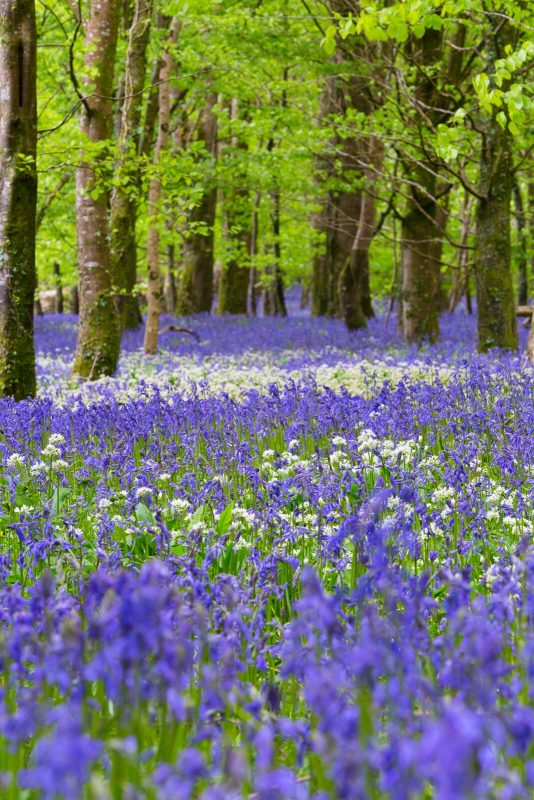 When the sun is lower in the sky, shadows of trees can be used as lead-in lines and they can also be used to hide your own shadow when working with the sun at your back.

Try facing into the sun for more striking results. Maybe position your camera so the sun creates a sunburst at the side of a tree trunk. Early morning is probably better than the evening, because there is the possibility of mist which can add atmosphere but it can be difficult to find the best spots before the sun has got too high, so visit the evening before and work out where to go.

The low sun also creates a warm light which can be used to create colour contrasts between the blue of the flowers and the yellow or orange tones of sunlight on tree trunks or the warm glow of the sky. 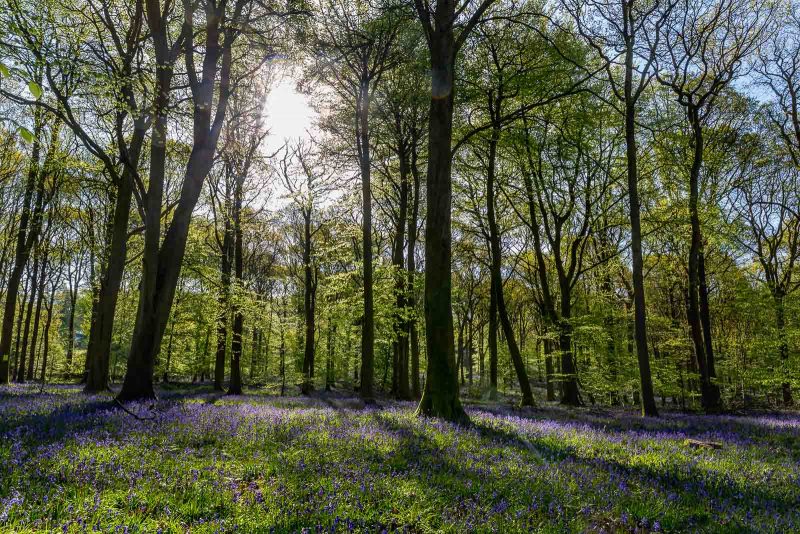 I like to use a low sun and warm colours to contrast with close-up shots of individual flowers too. Get down low and pick out one flower with a telephoto lens. I love using the 300mm f2.8 lens for this purpose and always use a tripod combined with live-view and a cable release when doing this sort of photography. A rigorous approach is required when working with a lens which gives such shallow depth of field. 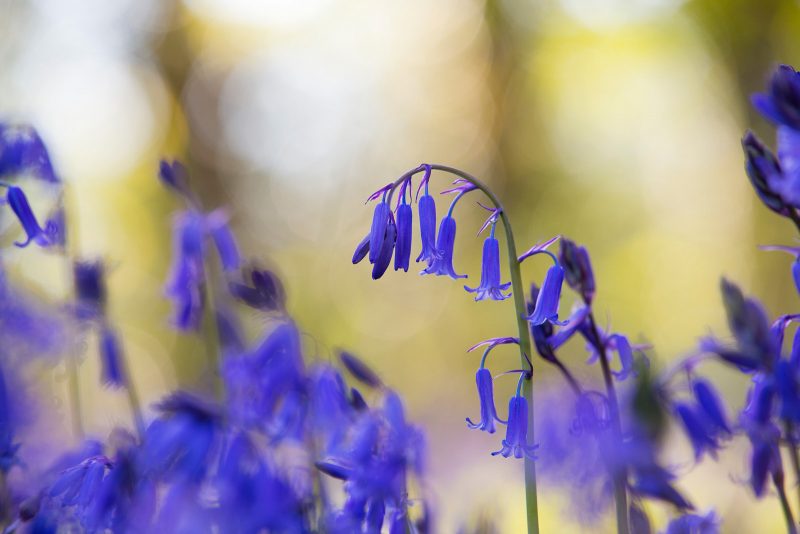 Get the lens down low and shoot up towards the gaps in the trees to create an interesting bokeh. Experiment with different apertures, f2.8 isn’t always best. 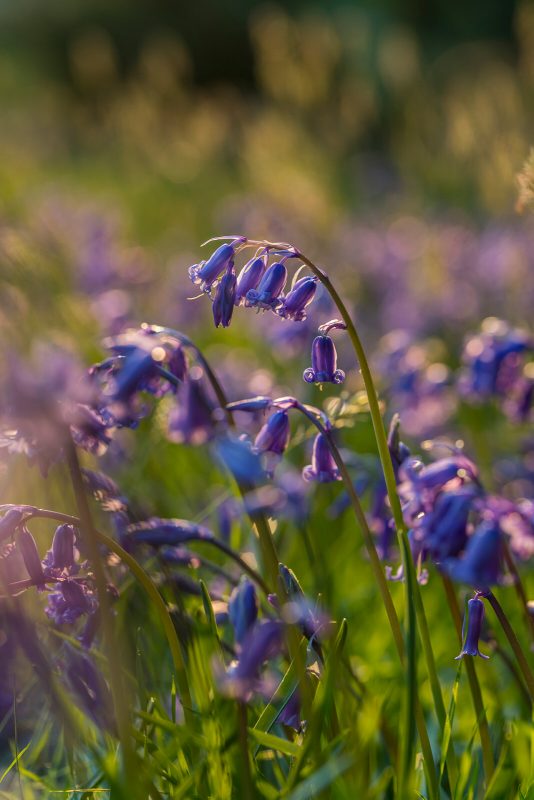 Wildlife in the bluebells

Always be on the lookout for wildlife amongst the bluebells. If you have a telephoto lens with you there might be opportunities for birds and mammals such as deer, rabbits, pheasants etc. On Skomer and Lunga try to photograph the puffins in bluebells. Closer to home, why not aim to photograph badgers in bluebells?

Meanwhile a macro lens might be useful for grabbing photos of seasonal insects which could include an orange-tip butterfly drinking nectar from the flowers; a crab spider hiding in a bluebell ready to hijack a passing insect, or maybe another type of flower such as the early purple orchid. 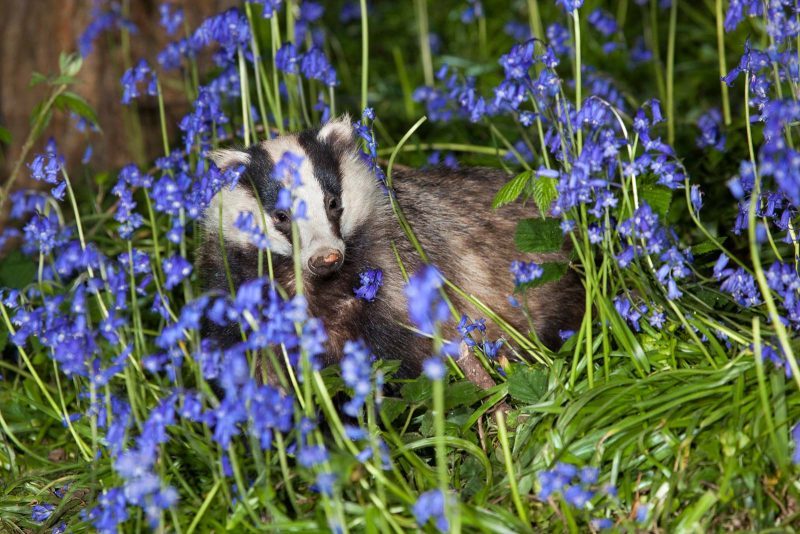 My aim with wildlife in the bluebells is to use differential focussing, ie a telephoto or macro lens with a wide aperture and a low viewpoint to help blur the background. But I would always be trying to fill the frame with bluebells and if this means getting a little higher then so be it. 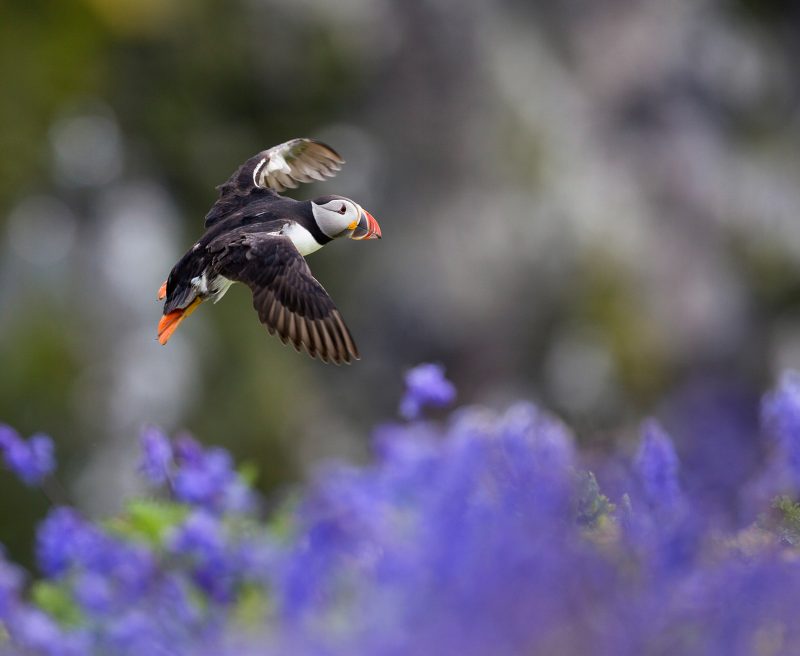 Don’t allow photography to get in the way of your enjoyment of the bluebell wood. Take time to breathe in the scent, soak up the view and immerse yourself in the atmosphere of the place. Just remember how lucky you are to be in the company of such staggering beauty.