Photographing Geothermals in the ‘Land of Fire and Ice’ 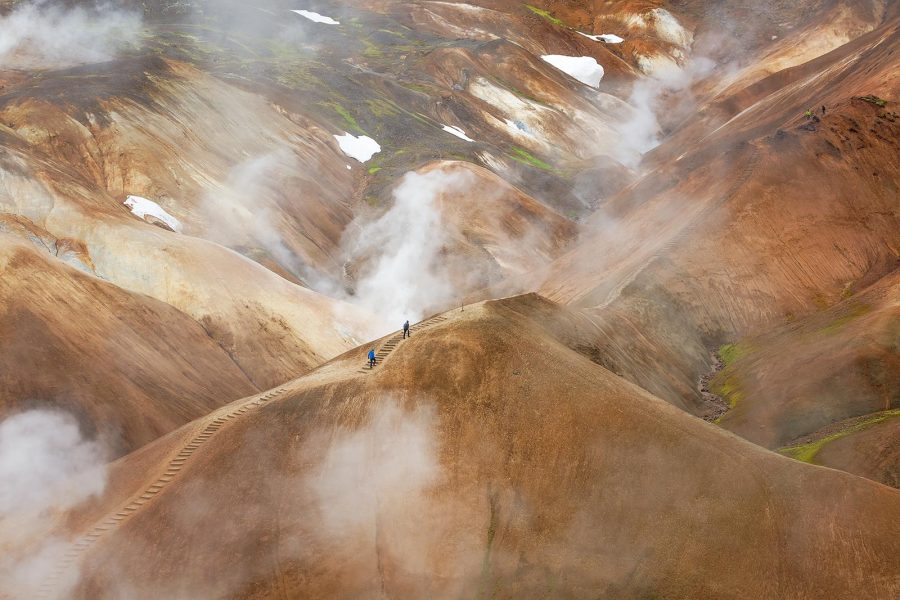 There is something intriguing about being immersed in the wild and unforgiving nature of Iceland. Its raw and windswept landscapes, entwined deeply with ancient sagas, have long beckoned to both photographers and explorers from far and wide.

Land of Fire and Ice

Affectionately referred to as the ‘Land of Fire and Ice’, this is a place where volcanoes, natural hot springs, and lava fields come head to head with massive glaciers, and the remnants of their retreat. 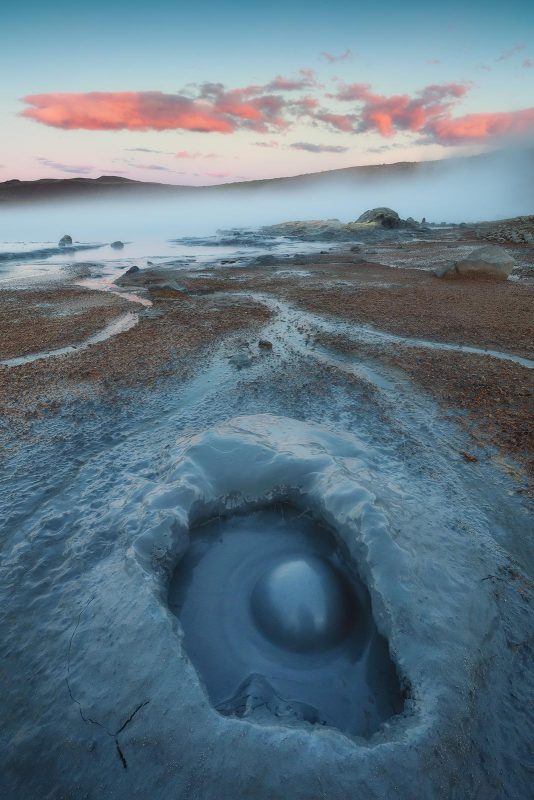 The country itself is a spot of land in the vast North Atlantic Ocean, situated upon a constantly active geological border known as the Mid-Atlantic Ridge. Geothermal activity surges forth here from Earth’s mantle, giving us a glimpse of the dense, fiery core that lies beneath. 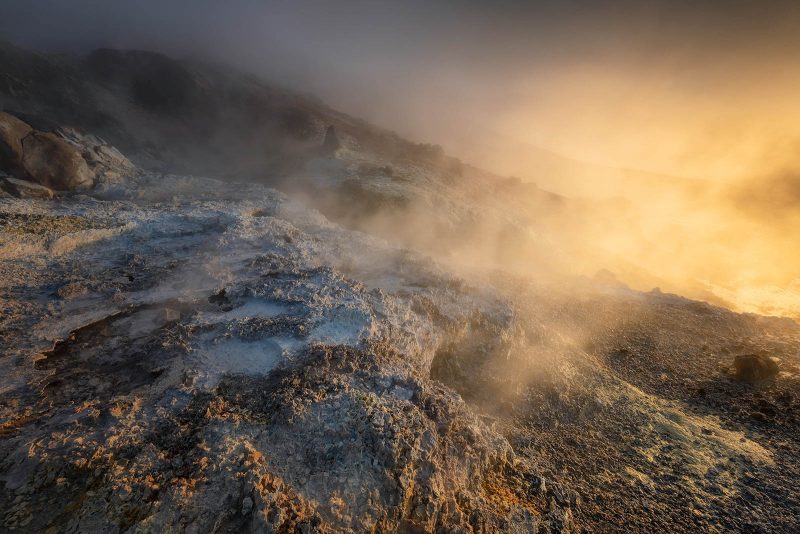 Around 20 million years of volcanic eruptions have shaped the Icelandic topography into a vision so otherworldly that it almost feels like visiting another planet. The environment offers a look back to an earlier time in history, when life forms such as microbes began to emerge.

This is especially the case in Iceland’s high-temperature geothermal fields. Unique plants and microorganisms, which have adapted to live in both extreme temperatures and toxic environments, flourish in conditions that would be hostile to any other species. 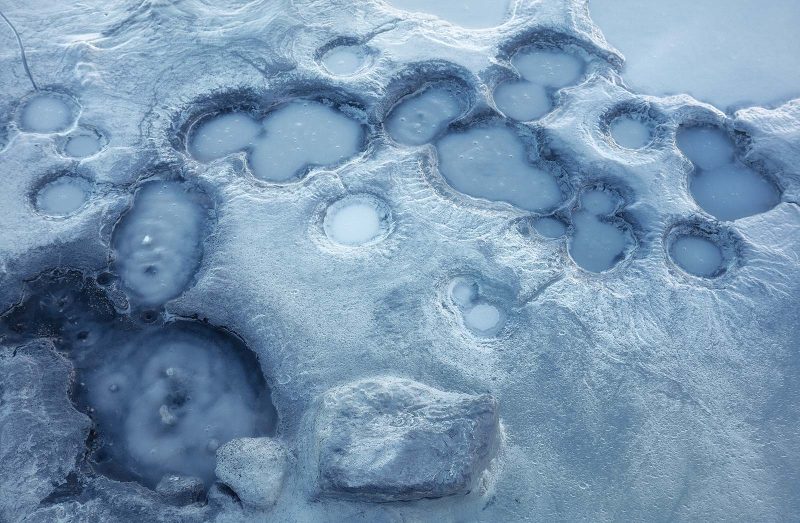 These dynamic geothermal areas are dotted with mudpots, mud pools, and fumaroles, where acidic steam rises from reservoirs of hot alkaline water, rich in highly concentrated and naturally-occurring chemical substances. The ground is tinged with a myriad of colours, as a result of hydrothermally altered rock. 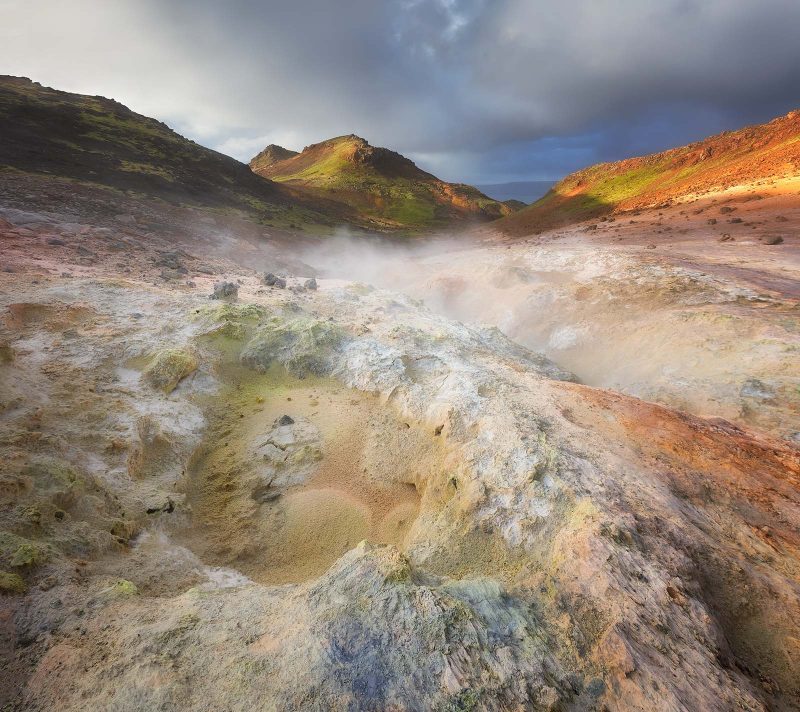 Needless to say, fascinating geothermal features such as these make for interesting subjects in landscape photography.

Inspired by the retreat of long winters and the promise of warmer summers, I set about the task of capturing the beauty of the geothermal resources that are so abundant and valuable to the country in which I live. This is how my series entitled ‘Geothermal Iceland’ came to life. 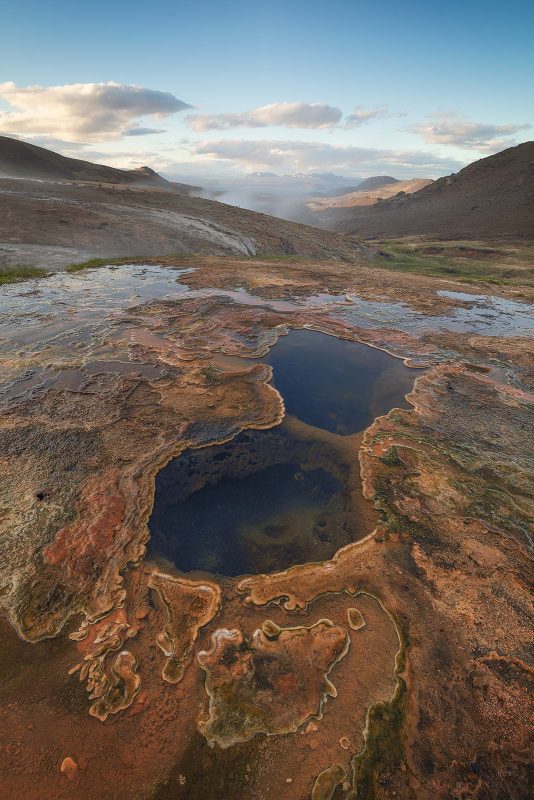 Photographing geothermal fields in Iceland is quite difficult to do during winter, when heavy snowfall makes many of these areas inaccessible. Additionally, some features become unrecognisable when covered in thick layers of snow and ice.

As such, capturing these images required a mixture of patience and planning: both waiting for the summer months, and optimising my chances to harness the light.

During summer in Iceland the sun only skims the horizon and doesn’t really set, leaving us with close to 24-hours of daylight. The golden hours are long, meaning that it is possible to stay out and shoot for quite a while if the conditions are favourable. Long shadows fade away as the sun gets lower in the sky, and the surroundings are bathed in a warm glow. 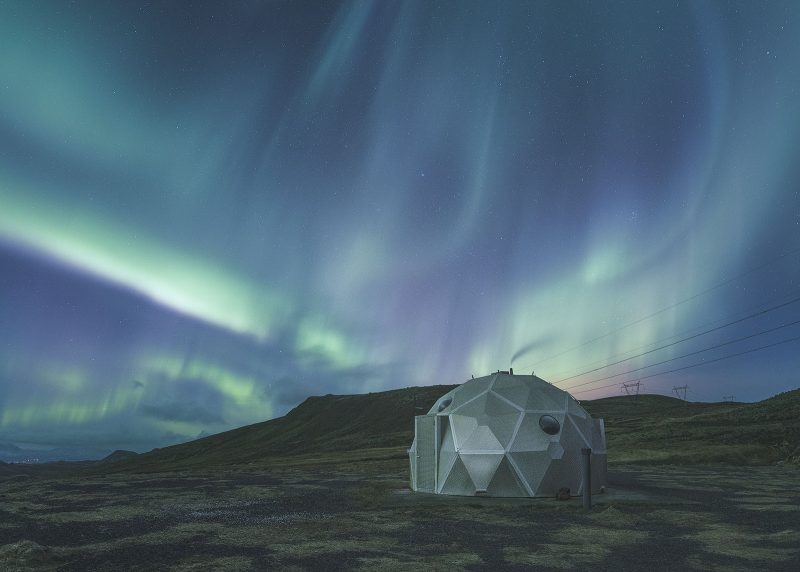 A great deal of research went into scouting for some of these locations, both from the comfort of my own home, and on hikes out into the Highlands. While geothermal fields have generally been mapped in Iceland, going out on foot can give you a perspective of the features on the ground which are hard to spot using tools such as Google Earth.

On long hikes such as these, safety is of the utmost importance. The weather is extremely changeable in Iceland so the ability to adapt to the conditions, and to know when to turn back, or to stay home and not go out at all, is paramount. 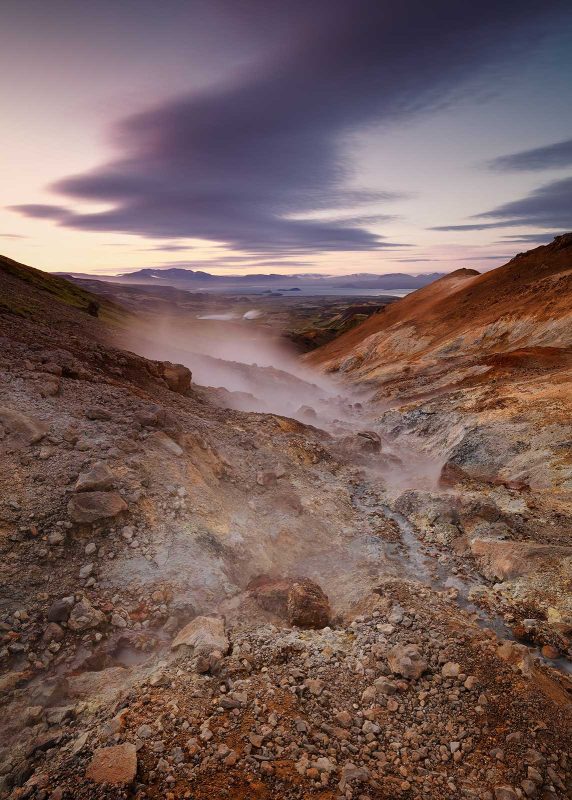 It’s also helpful to keep in mind that not every trip will be fruitful. It is often the case that you might find a great composition to return to, the next time that you can steal away for a day or two.

Over a period of four years, I managed to visit many of these locations over and over again, chasing images in different light. Most often, I would minimise my camera gear so as to make it easier to physically move through difficult terrain, and to create space in my bag for food and emergency equipment.

Sometimes I would limit myself to only one or two lenses, most often a wide-angle and a telephoto. The former is useful for creating dramatic images with interesting foregrounds, whilst the latter is wonderful for abstract scenes amidst the peaks of colourful, rhyolite mountains. 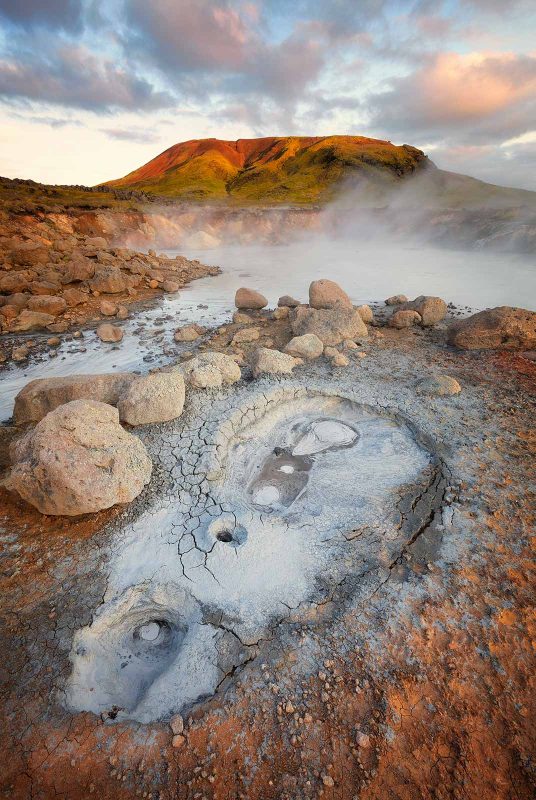 As always, a highlight of shooting this series was being out in nature with friends and loved ones. Cooperating to plan your day, or embarking on a trip out together, is one of the most enjoyable things in life and can bring you all so much closer together.

One of the more moving experiences of this project occurred when my husband and I decided to visit the Geldingadalsgos volcano at Fagradalsfjall in 2021, the day after the eruption began.

The path to the fissure had not yet been established and, though many people were trying to access the site, it was hazardous terrain and easy to get lost. I wrestled with why we were potentially heading towards something that could swallow us whole, instead of turning in the opposite direction for self preservation. 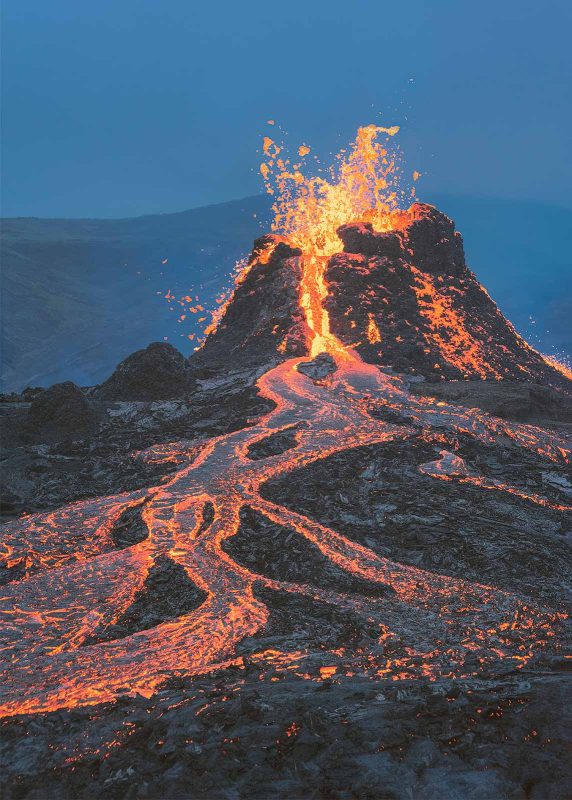 It is easy to be so enthralled by the power of nature that all senses are annihilated.

I had been so unprepared that my batteries weren’t even fully charged, and it soon came to light that I’d left some of my memory cards at home. It was perhaps the excitement, the thought of such a physically taxing hike, or anxiety about being around others (having largely been isolated during the pandemic), that clouded my judgement.

In the end I managed a couple of shots, and have since put my ‘Geothermal Iceland’ project on hiatus while I concentrate on a series that offers an alternative look at our relationship with natural resources on this planet, as well as any future worlds that we might inhabit. 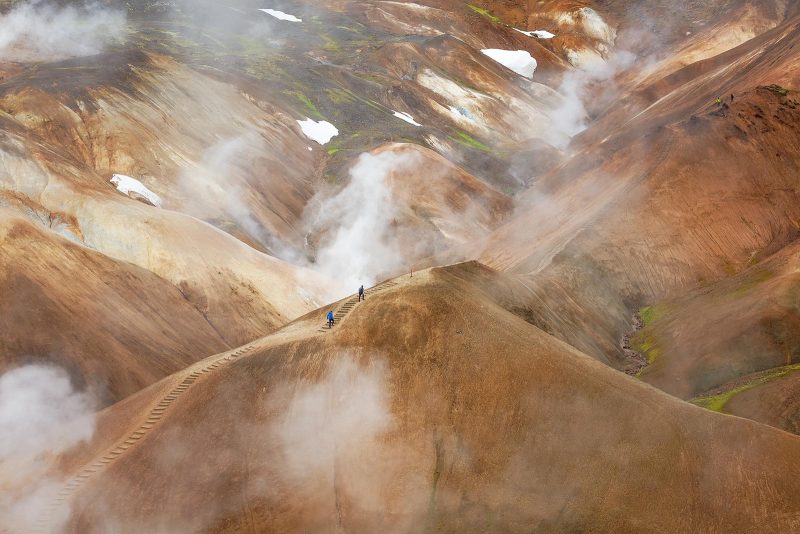 Despite this, ‘Geothermal Iceland’ is not extinct. The project is laying dormant until the day that inspiration and creativity will combine once again, leading me out into the summer sunshine on the search for the heartbeat of Earth beneath our feet.