How to Photograph Turnstones 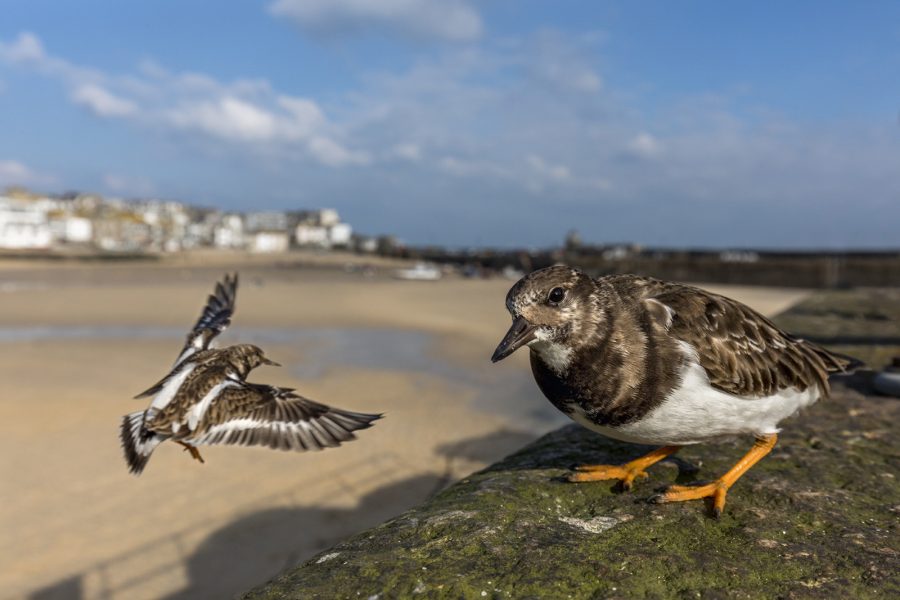 Home » Featured » How to Photograph Turnstones

For anyone just starting to develop an interest in bird photography, the turnstone makes a great subject. It is widespread around the coast of the UK and, unusually for a wading bird, it is exceptionally confiding.

Even for those of us with greater experience of bird photography, the turnstone continues to offer the challenge of capturing its behaviour and experimenting with different styles of photography. So, let’s take a closer look at this willing little wader.

Some background about turnstones

Turnstones breed in the Arctic and then migrate south, where they can be found on shorelines literally throughout the world. In the UK, turnstones occur as a migrant and winter visitor.

Those turnstones that breed in northern Europe tend to migrate south to Africa, and some of these pass through the UK along the way. Our winter visitors, which can arrive in the UK as early as July and remain until April, breed in north-east Canada, Ellesmere Island, and Greenland.

It’s quite a thought that these birds will have been born in an area completely devoid of human life, and maybe this is one of the reasons why they have little fear of humans when they arrive in the UK.

Turnstones were named because of the way they feed. Their natural habitat is a rocky shoreline with pebbles, stones, and seaweed. Here, they push and pull at the seaweed and turn the stones over to find crustacea and sometimes insects beneath.

Turnstones are nothing if not adaptable, so it is quite common to see them scavenging at the strand-line, picking at dead crabs and fish. Their lack of fear has allowed them to adapt their feeding strategies, so they can be found picking up scraps from fishing boats, idle lobster pots, fishing nets drying on harbour walls, and even scraps of fish and chips dropped by tourists.

Over time, they have become ever more dependent on people in harbour towns, and can often be found eating bird seed put out by caring locals.

Read more: How to Set Up a Feeding Station for Wildlife

Where to look for turnstones

The best turnstones for photography are those that overwinter in harbour towns where they become accustomed to people. Any harbour town in a rocky part of the coast is worth a look. When the tide is high many turnstones will wander the harbour walls looking for food, but others might share a roost site with other waders.

It is rarely possible to get as close to turnstones at mixed wader roosts because the flock is only as tame as its most nervous member. As soon as one bird takes flight they all go and, if you cause a roosting flock of waders to take flight, you have failed in your duty of care to the birds.

So, extra caution is required. As soon as any bird in the flock looks nervous you mustn’t try to get any closer. Signs of nervousness include agitated movement and loud calling.

Exposure is tricky because turnstones have very dark wings, but white bellies. If the light is fairly constant I much prefer manual exposure. I choose an exposure for which the detail in the white areas is just within the range of the sensor (using the histogram or highlight alert to check this).

I know that many photographers, particularly those that aren’t as confident, are less inclined to use manual exposure. However, for any birds with white in their plumage it is worth making the extra effort.

If the light is changeable then there is more of an argument for using aperture priority, in which case I generally choose a wide aperture and dial in some under-exposure to prevent clipping the whites. The amount of exposure compensation will depend on the tones in the background of the photo, the brightness of the light, and the metering method (usually evaluative or centre-weighted).

Dark backgrounds need under-exposure and bright sun increases the contrast, therefore requiring more under-exposure. As a guide, I usually work between ‘0’ and ‘-2’ EV, most often at ‘-2/3’. I might occasionally take it as far as ‘-3’ EV, though this is going to result in a very dark image and, unless I am looking for a special effect, this is usually a sign that the light isn’t quite right.

I generally use a short telephoto lens for turnstones. My favourite is the 300mm f/2.8, which I sometimes use with teleconverters. I don’t use a tripod because this length of lens can be hand-held, and without a tripod I can change position faster.

The camera should be set to follow focus (AI Servo in Canon) and I usually opt for the single focusing point, enlarging that slightly when the birds become more active, for example, in flight. For hand-held shots I have the image stabilisation turned on, opting for mode 1 (passive) when I am holding the camera still, and mode 2 (active) when I am panning with birds in-flight. 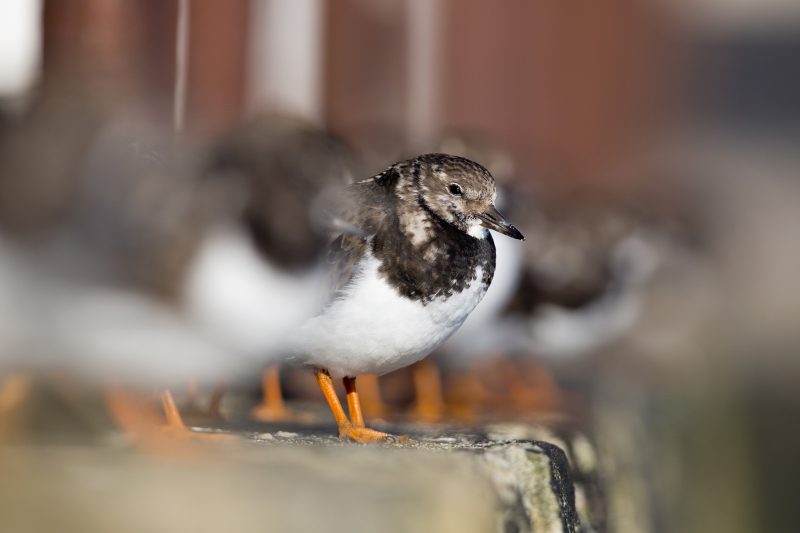 It’s important to remember to have the burst mode set. When photographing birds I rarely take just one photo.

Turnstones are quite bulky birds so it is possible that, when the eye is in focus, the flank of the bird might be out of focus because it is nearer to the camera.

There are a few ways to avoid this. One is to wait until the angle of the bird is such that the eye and flank are an equal distance away. Alternatively, gain some depth of field by taking photos from slightly further away, using a shorter lens or a smaller aperture.

Smaller apertures mean slower shutter speeds, so this is only an option on brighter days. Whatever exposure mechanism I choose I always keep an eye on the shutter speed. Turnstones rarely stay still so it makes sense to have a shutter speed of 1/500th of a second, or faster, increasing this to at least 1/2000th of a second for flight and bathing shots.

A well-fed turnstone will take a break from feeding to undertake its daily activities, such as bathing and preening. I always keep a look out for places where they do this, and will often stake them out. Turnstones are incredibly vigorous in their bathing, with wings and water flying everywhere.

I sometimes find that my camera’s focusing can be fooled by the splashes of water causing the servo to hunt for focus. When this happens, I try to focus on the bird’s eye and then lock the focus using the back-button (either pressing it or releasing it to stop the focusing). I often find that I need to tweak the focus manually.

It’s worth experimenting with different shutter speeds during periods of activity. Sometimes I prefer a slower shutter speed to blur the fastest moving parts of the bird, but I usually try to keep the head sharp.

It’s difficult to give specific advice about shutter speeds but when I say ‘slow’ shutter speed, in this instance I would recommend something around 1/250th of a second.

After bathing turnstones tend to preen themselves. This can present some interesting images. I get down as low as possible to blur the background, and wait until the bird uses its beak to preen the near side of its plumage. I am always aware of the need to see the bird’s eye before I squeeze the shutter button.

Read more: What are Shutter Speed and Aperture?

The biggest challenge is to photograph turnstones in flight. For this I would agree with Phil and Kirstie: it’s all about ‘Location, Location, Location’. I am always on the lookout for a location where the turnstones regularly fly from one spot to another, and where it is possible to position myself at right angles to their flight path, with the sun behind me.

In harbour towns there are occasions when birds come to food and are sometimes disturbed by people. In this case they might repeatedly fly back and forth. Although in my experience they more often run away, as if to confound the photographer!

How to take wide-angle shots

Being relatively tame and easily attracted to food, turnstones are a good subject for wide-angle photography. The benefit of wide-angle is to have more depth of field and a wider view, so it is possible to show more of the context as well as the bird. However, you have to get the camera very close to the bird to have sufficient impact.

Because my aim is to have the background slightly sharper, I tend to use a smaller aperture for this sort of photography, maybe f/8, for example.

I am always aware of my shutter speed, which has to be quite fast because the birds will respond to the sound of the shutter if they are very close to the camera. So, again I would advise a shutter speed of at least 1/500th of a second, and faster if possible.

On the harbour wall in St Ives I am happy to put my camera on the ground, but I do have a plastic ‘plate’ to hold my camera close to the ground if necessary (see my article about rabbits). Then, I use a bit of birdseed to attract turnstones to feed in front of my camera. It all sounds very straight-forward, doesn’t it?!

I have tripped the shutter using a remote release, but often I will just lie out on the harbour wall and hold my camera at arm’s length, because the turnstones in St Ives are very tame.

If I am using a remote release I tend to prefer using manual focus, pre-focusing on where the birds will feed. If I am lying down and holding the camera I use live-view and autofocus, setting quite a large cluster of focusing points. This technique allows me to move the camera slightly to improve the composition, but does require patience and tame turnstones.

One problem caused by wide-angle photography at ground level is the shadow of the lens encroaching into the frame. This is one of the rare occasions when I will take my lens hood off to take photos. Other than that, it is simply a matter of being aware of the problem and trying to get the right angle and focal length to eliminate it.

I have said that turnstones are primarily wintering visitors and, it is true that most of my photographs of them are taken between December and March. However, it is always worth re-visiting turnstone locations throughout April and even into May, just in case a few of them have lingered longer.

At this time of year, they moult into summer plumage, with orange in their wings and strikingly pied heads. They look stunning and are definitely worth the effort.