How to Photograph Flocks of Birds

Home » Photography Tutorials » Wildlife » How to Photograph Flocks of Birds

Part of the attraction of photographing birds is the variety of images that are possible, from close-up portraits to wider views showing the subject in its environment. But of all the ways you can photograph birds, perhaps the most exciting in terms of a visual spectacle is bird flocks, especially when they gather together in large numbers. This form of bird photography is also a great way to capture fantastic images of birds when either it’s not possible to get close-up views, or if you don’t have the pulling power of a long telephoto lens. 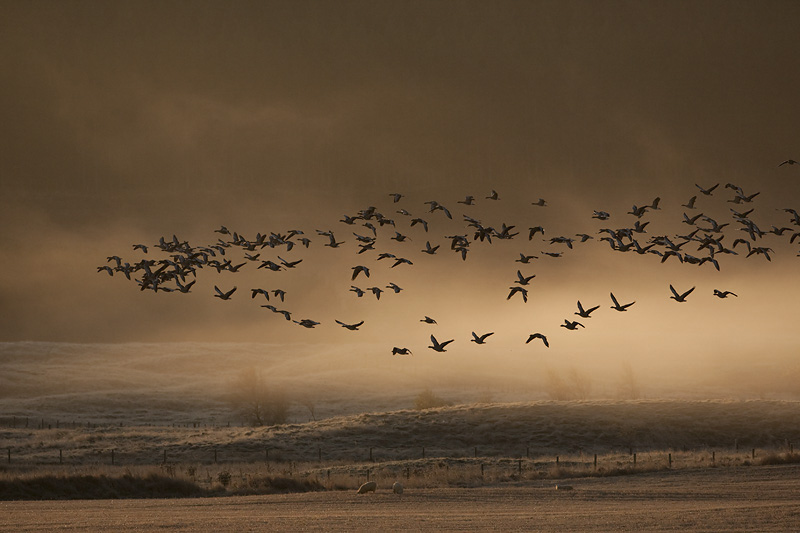 There are many ways to capture interesting shots of bird flocks, but a very easy yet effective technique is to shoot them in silhouette. Birds often flock together at dawn and dusk, and this is an ideal opportunity to create striking silhouettes against a colourful sky. A good species to try this technique on are rooks, which gather in large numbers at roost sites along with other corvids. Roost sites are relatively easy to locate from autumn onwards as corvids tend to be noisy, conspicuous birds enabling you to watch them as they fly back to their roost site, which is usually in a tall stand of trees. 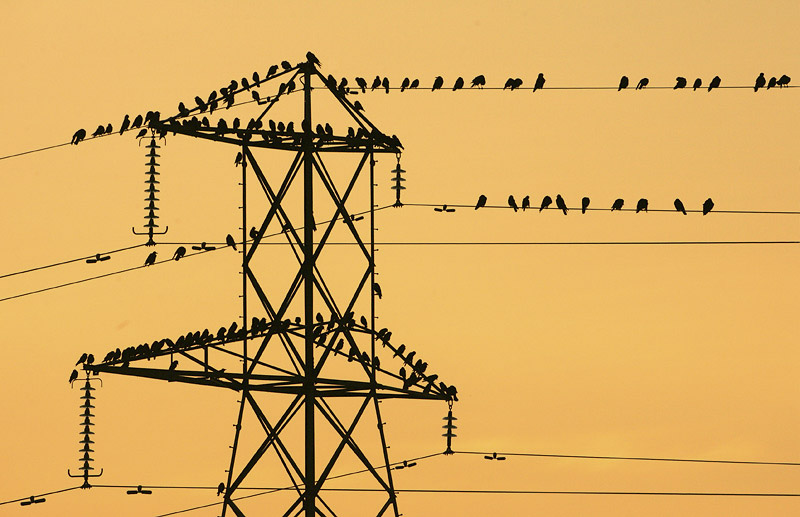 As the enter the roost site, and again when they leave early the following morning, they will typically perch up nearby and often use telegraph wire or pylons as well as tree tops. For the shot to work, a colourful sky is needed and while there is no guarantee this will happen, sunrise and sunset provide the best chance. It may be possible to use your car as a mobile hide, or if not then get into position before the birds arrive and stay concealed. If you’ve done your homework then the birds should arrive on their favoured perches leaving you to simply line them up with the most colourful part of the sky. To make sure the birds are perfectly silhouetted take a meter reading directly from a bright part of the sky using spot metering, and use this setting to take the shot. This will create a simple graphic silhouette of the birds and a rich saturated colour in the sky behind.

Late autumn through until early spring is also an ideal time to photograph wader flocks as they gather in their tens of thousands around the coast. Twice each day the tide covers their feeding grounds out on the mudflats and they are forced to fly to shore where the congregate at traditional roost sites. The highest tides of the month are usually needed to push the birds into range, so it’s worth checking this out before you plan your shoot. Public hides overlook some of these roost sites, which means that you’ll be well concealed with little chance of disturbing the birds. If you’re photographing roost sites at other locations then you may need to use your own hide to avoid disturbance, although there are several sites where you can stand quietly behind a sea wall and photograph the birds as the fly past. 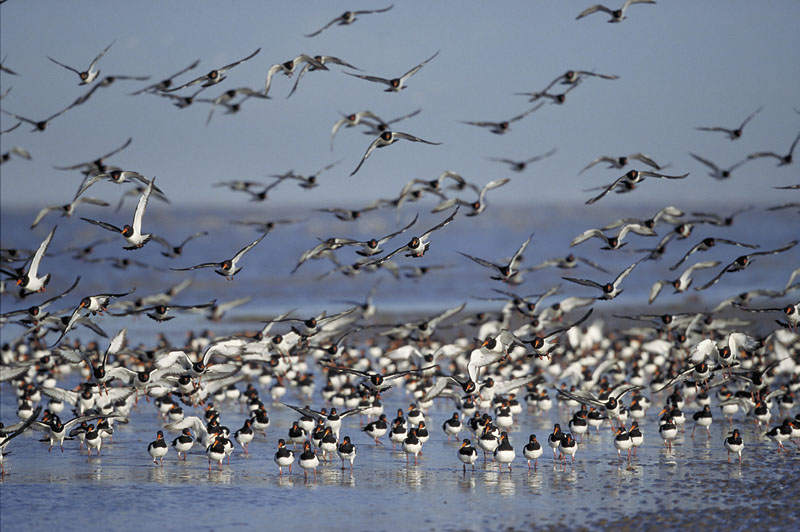 There are several kinds of shots that you can attempt with waders depending on the roost site, how close the birds come and the quality of light, Again, silhouettes are worth trying if high tide coincides with dawn or dusk. If you’re not especially close to the roost site it may still be possible to shoot flocks of birds as they fly down the coast, as they tend to take the same route each time. As high tide approaches, thousands of waders may gather up together and wheel around creating spectacular formations. This can go on for quite some time and provide superb opportunities before the birds finally descend onto the roost site. At other times flocks of birds may be pushed gradually towards you by the incoming tide. This shot comes to life when the birds at the back of the flock fly up and over the birds at the front. Focus on the strip of birds nearest the camera and then wait for the others to fly into the space above to get the most dramatic shots.

Depth of field can be an issue for this kind of shot, but if you are using a smaller focal length lens, such as a 200mm or 300mm, then more of the flock will be in focus. To increase depth of field, close the lens down to an aperture of f/8 or f/11 – but not so much that the shutter speed becomes too slow to freeze the movement of the birds. Around 1/500th sec minimum is usually required (also see below on the use of slower shutter speeds). Depending on the brightness of the light, it may be necessary to increase the ISO setting to achieve this sort of aperture / shutter speed combination. At longer focal lengths depth of field becomes shallow, so it’s best to try to have as many birds in the same plane of focus as possible and to focus on the most dominant birds in the picture – usually those nearest the camera. 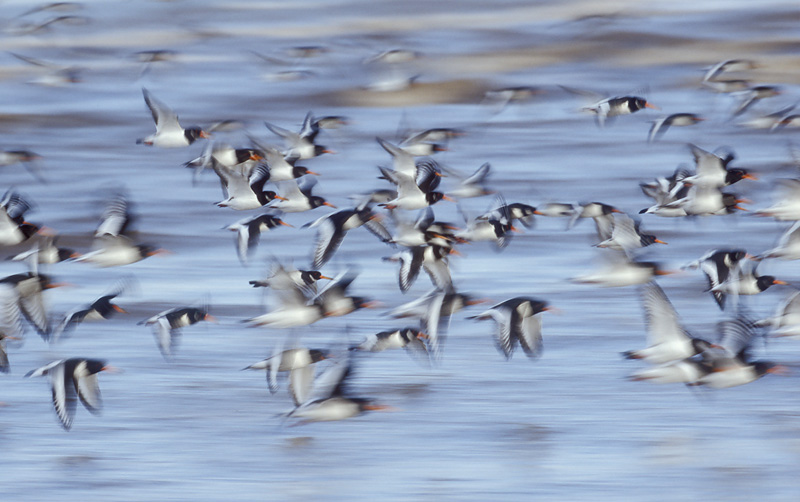 As an alternative to freezing the action, set a slow shutter speed and pan the camera for a more creative image that conveys movement within the flock. This technique works best when there are flocks of birds flying across in front of you, rather than towards the camera. It is a good technique to try when light levels are low, rather than cranking up the ISO setting (with the resultant noise problems). It’s possible to pan by hand holding the camera, but I prefer to use a tripod for a smoother result. A shutter speed of around 1/30th second gives good results, but it’s worth experimenting with different speeds to find what suits the situation best. As with most panning shots, the aim is to maintain some of the birds’ heads reasonably sharp, while blurring their wings and the background. It does take some practice to get the panning speed right and even then results will vary dramatically. But one of the big advantages of digital photography is the ability to be able to take literally thousands of images in order to get the right shot.

Focusing on flocks of birds is not quite as straightforward as it might seem because you are never quite sure exactly where the focusing point is locking on to. If the birds are in a tight flock and in the same plane of focus, then focusing on any bird in the flock will give a good result. But if the flock is quite deep then it may not be possible to get all the birds in sharp focus. If possible, try to lock onto the bird or birds nearest the camera or those that will form the main focal point of the shot. This is best done using continuous focus mode, and you may want to try using different focusing point configurations, such as a small cluster of points rather than a single point.

Some flocks of birds, such as starlings, go to roost at dusk when light levels can be very low making it difficult to capture sharp shots without pushing the ISO setting to very noisy levels. In this kind of light go with the flow instead and shoot with a very slow shutter speed for lots of blurring and an impressionist feel to portray the fluidity of the flock. This has been done very effectively with wader flocks but equally impressive images can also be made with starlings. Starlings form the tightest flocks and most amazing formations when there is a bird of prey around and this is a good time to try this approach as well as when the birds descend dramatically into the roost. 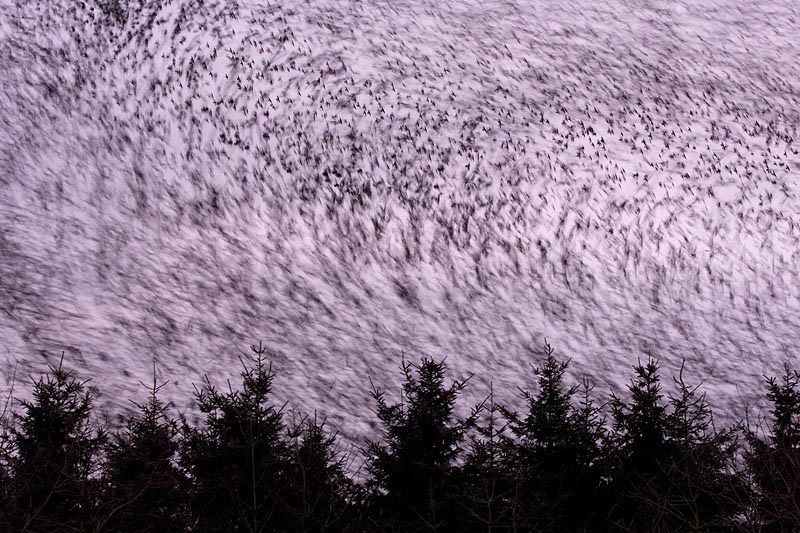 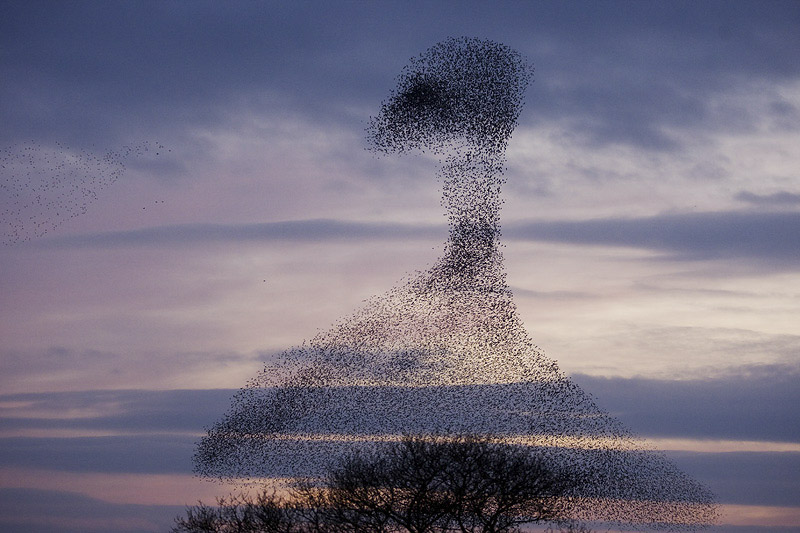 The ‘correct’ shutter speed for this type of shot is very arbitrary and depends on how fast the birds are moving and your position in relation to the flock. 1/15th second or slower will give a good degree of blurring, but if you go too slow then the effect may be lost. This technique varies from panning in that the camera remains stationary during the exposure and it’s the movement of the flock that is recorded as a blur, while other features such as trees are sharp. A tripod is therefore essential and it’s also worth using a cable remote release (like these for Nikon, or these for Canon) to prevent camera shake. 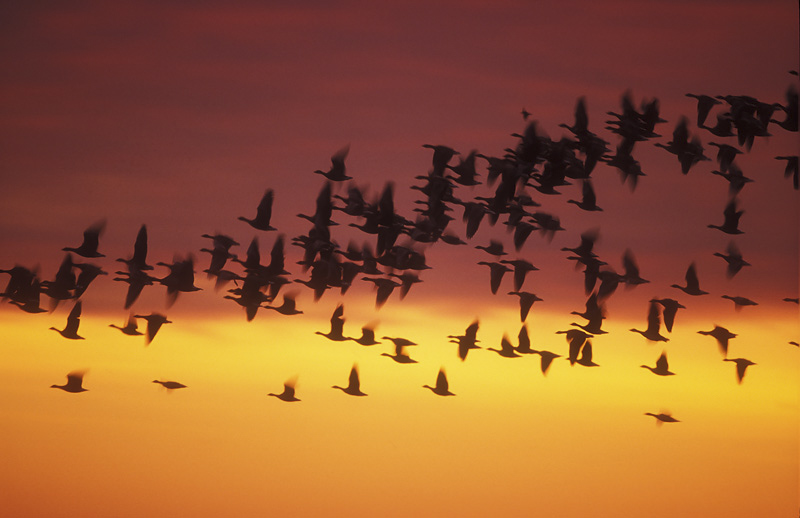 Further Reading: “How to Photograph Birds in Flight“

There are plenty of other situations where it’s possible to photograph flocks of birds, and as autumn approaches thousands of geese and swans will be arriving from their breeding grounds to spend the winter at traditional sites. Some of the best places to visit are wetland reserves where there are public hides that you can use to photograph the flocks as they feed and fly overhead. Both geese and swans fly to and from their overnight roost site to their favoured feeding grounds at dawn and dusk and this is a great time to capture them. By making repeated visits to your local wetland, you’ll build up a better understanding of the bird’s behaviour and then be better placed to make sure you’re in the right place at the right time to nail the shot.