How to Photograph Long-Tailed Tits 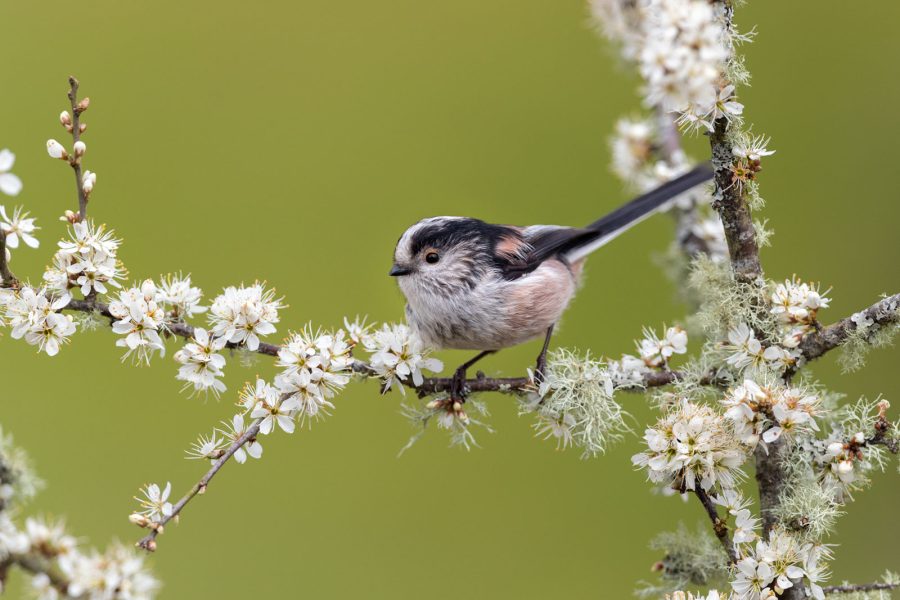 Cute, colourful, and charismatic, what’s not to love about the long-tailed tit? This species is common enough for us all to have a fighting chance of photographing it not too far from home. Spring is arguably the best time to start, because this is when their annual life cycle begins with the creation of their remarkable nests.

Finding long-tailed tits is remarkably easy. Firstly we need to find a suitable habitat, such as the edge of a woodland, a hedgerow, or an area of scrub, including gorse or blackthorn. Then employ the naturalist’s most important sense: hearing. Long-tailed tits call to each other all the time, even when they have a beak full of nesting material!

For anyone unsure of the sounds they make, it would be a good idea to listen to a bird identification app (I use the Collins Bird Guide), or visit a website such as the RSPB.

Once their twittering calls have been located, simply look for a constantly moving ball of pink and white cotton wool, with a lollipop stick attachment at its rear. They really are the most bizarre but wonderful form.

During March and April these birds are busy making their nests, and it is these wonderful structures which, for my money, make the long-tailed tit one of the miracles of the bird world. Their nests are made by stitching together bits of lichen, moss, and wool with spider’s silk, painstakingly collected one strand at a time.

The skill required to create this spherical structure, so perfectly camouflaged in a thicket of bramble or gorse, or in the fork of a lichen-covered tree, is astonishing. A completed nest has a small hole for access and is lined with feathers for warmth. Making a nest is a long, drawn-out affair and isn’t without its problems.

A couple of years ago I watched as a pair of long-tailed tits busily collected feathers. I managed to get a few photos as they perched briefly on their way.

As soon as they had deposited the feathers in their nest and flown off to find more, a marsh tit nipped in and stole them! That marsh tit also had a nest to make.

Feeling a bit sorry for them with all the work they have to do, I sometimes provide a few raw materials for nest-building. I attach sheep’s wool to a branch and scatter feathers from an old pillow. I draw the line at collecting lichens and spiders’ webs for them; in any case I suspect they are more efficient in that task than I would be.

Keeping it in the family

Their nests are a miracle of engineering, but not all of them stay the course. In fact, the long-tailed tit has one of the highest failure rates of any garden bird, with many nests being raided by predators such as cats, magpies, and squirrels.

When this happens the parents are bereft, but all is not lost. This is when we witness one of the most endearing traits of this gregarious creature.

Adults whose nests have failed will automatically look for another nearby nest, and will join in with the task of feeding the youngsters belonging to other parents.

With the potential for between eight and twelve chicks in a nest, a few extra helping beaks are very useful in speeding up the process of fledging, and improves the chicks’ chances of success.

Photographing around the nest

If we can find long-tailed tits in March or April, we can be sure they will be building a nest somewhere. At this time of year they spend all day either seeking food to sustain themselves, or collecting nesting material.

It won’t take long to find an individual carrying something even fluffier than itself. We must watch until the bird disappears into a thicket; if it reappears a few moments later with an empty beak then we have its nest.

Initially I just watch the birds from different angles to see exactly where they are going. I try to identify the branches on which they pause on their way in and out. Using my longest telephoto lens, I can stand a safe distance away to get shots of them bringing in nesting material.

So long as they continue at the same rate as before, I feel confident that I am not having an impact on them. By spending time with them we will, to some extent, gain their trust, but it is vital that we do nothing to endanger them or their nest.

I have on occasion found a nest close to a path and realised that, if I try to take photos, I will attract the attention of other people. As well-meaning as people are, the more who know about the nest site, the less chance the birds have of succeeding.

Having got a few shots of the birds carrying nesting material, I might start to assess whether there is any chance of getting photos of them at their nest. We must accept that not all nests are suitable for photography; many are too well hidden.

It takes persistence to locate one with a clear line of vision to the entrance hole, which can be photographed from a safe distance away.

Even with a suitable nest, photography is made difficult by the shadows and highlights created by the sun passing through the dense vegetation. It’s often better to take photos on bright cloudy days when the shadows are less of a problem. This might involve using a higher ISO in order to achieve a fast enough shutter speed.

Long-tailed tits are quite confiding birds, but I don’t think it is possible to photograph them at the nest without a hide or a remote release. So, I either use a long lens from a hide, which I move gradually closer over a number of days, or I set up a tripod and lens slightly closer to the nest, and use a remote release from a distance away.

One benefit of the remote option is that I can use a shorter focal length lens. This will give me a bit more depth of field, even at slightly wider apertures.

The drawback is that the lens will have to be focused manually but, generally, the adult birds will approach the nest using a series of regular perches. When they are feeding young they are very predictable. Nonetheless, there will be more than a couple of shots that aren’t sharp!

Anyone who wants to attempt a remote shot such as this should make sure they are well-practised in the art of setting up a camera, lens, and remote release, so it should only take a few seconds to achieve this in the field. Literally, I mean practise indoors before doing it for real.

Whatever strategy we use, we must be sure that we do not disturb the birds or affect their behaviour. We must monitor this by careful observation.

By mid June the nesting season is finished, but there are still plenty of opportunities for photography. Flocks of long-tailed tits rove through hedgerows and gardens looking for good sources of food. They can be remarkably confiding.

A couple of days ago I heard a flock of long-tailed tits in the bushes, and I just stood still and watched as they twittered and flitted all around me.

Juvenile birds, recognisable by the dark sides to their heads, and often slightly tatty tails (from being stuck in a cramped nest for weeks), are inexperienced and have even less fear than their parents.

Long-tailed tits can be attracted to gardens throughout the year using bird feeders. They love peanuts and adore suet or fat balls. In the morning I go down to my bird feeding area and put out bird seed, peanuts, and fat balls.

Before I’ve finished I usually hear the distinctive calls of long-tailed tits, and quite often the first bold birds will be moving in before I’ve walked away. So, there are chances to photograph them with a medium telephoto lens without the need for a hide.

One trick for getting good shots is to put feeders in attractive locations, for example near a tree with blossom on it. The long-tailed tits are quite likely to perch in the tree before coming down to feed, giving us the chance to get some natural shots.

White and pink blossom works well photographically, as it picks up some of the tones of the birds, making a pleasing colour palette. I’ve even used a washing line set up with pretend washing that I bought specifically.

This may not be everyone’s cup of tea, but it certainly adds a splash of colour to an image.

Read more: How to Attract Birds to Your Garden for Photography

In the bleak midwinter

It makes sense to carry on feeding birds through the winter. By getting them accustomed to feeders in our gardens, we have the chance to photograph them in different conditions, including winter snowfall.

A fluffed-up ball of fluff in a fluffy flurry of snow isn’t just a tongue-twister, it’s also a great image to capture.

The bleak, cold weather encourages one further endearing aspect of their behaviour.

Long-tailed tits continue to be sociable with each other right through the winter and, when it is really cold, they even huddle together for warmth at their overnight roost sites. We’ve all seen the images of them cuddled up neatly in a row, though so far that particular shot has evaded me.

So, here’s an adorable bird with plenty of charisma and character, which offers a plethora of behaviours that we can try to capture on camera. Time spent photographing long-tailed tits is never wasted, regardless of the images. The experience is always uplifting!