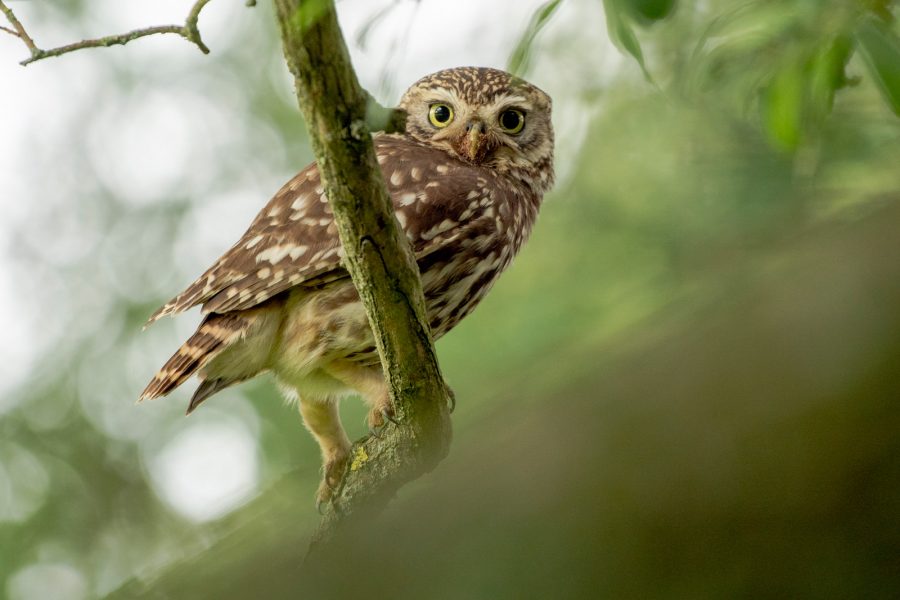 When a little owl lands in front of you, it is nothing but startling. It has an expression of fury on its face, or at the very least barely controlled rage. It is a voracious predator, perfect in form and function, despite being miniature in size. It punches alarmingly above its weight category. This is the little owl, and it is said by some that if it was the size of an eagle then it would predate on humans.

I have witnessed them drop onto young rabbits many times their mass, take thrushes, and carry chunky short-tailed field voles back to the nest. I have seen them fearlessly mob foxes and swoop down on domestic cats foolish enough to stray into the heart of a little owl’s territory. 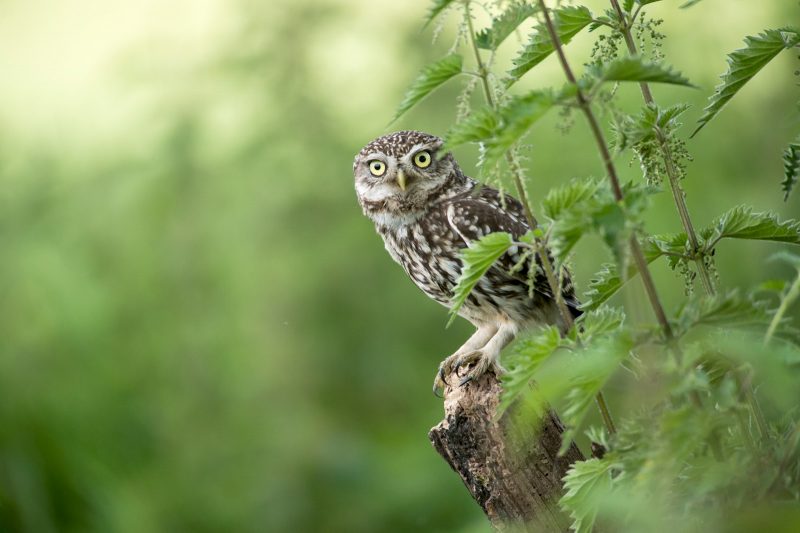 However, despite this ferocity, as a species of owl they are quite easy to photograph. They are often diurnal, and during the breeding season they are relentless in pursuit of food for their young. Before fledging, the increase in activity to and from the nest is remarkable; in one hide session of about four hours, I estimate adult little owls came down over 100 times, just 6 metres from the hide.

I must stress that this is exceptional, and only occurs for a short period of the year. But throughout the year, if you know where they are, these owls are still relatively easy to photograph.

How to find little owls

First, you have to find them. For me, this is often involves listening for their calling, which I can only liken to a mixture of yelping kittens or puppies. It is very often uttered at dusk and dawn. After that, finding them visually is often just a case of scanning fenceposts or prominent perches.

If a fencepost is slightly taller than its neighbouring posts, closer inspection with binoculars can reveal the distinctive squat, dumpy shape of a little owl. They favour open habitat, with some short-turf grassland, and some big specimen trees. 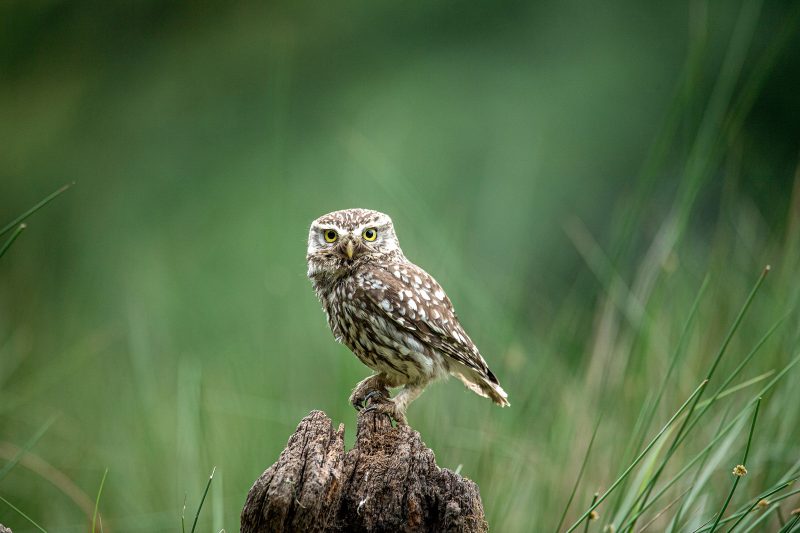 Little owls can allow a reasonably close approach, especially if you wear camouflage. Try to hide your movements or disguise your shape; I have managed to get really close by slowly crawling along the ground, pushing my camera and lens in front of me.

They will often not take flight until they feel truly threatened. If nesting around farm buildings, they watch farm workers and dog walkers come and go – just staying still, hunkered down, until the danger passes.

Yet with this being said, I do feel that if a photographer adopts this form of photography, invariably they push it a little bit too much and put the owl to flight. With little owls, or indeed other species, if photographers operate close to the nest site (which could be protected by law), despite birds returning to the nest with food, we cannot judge how much disturbance is being caused.

Is a photographer’s presence disrupting the flow of food to and from the nest, possibly by a percentage? Potentially, one of the adult birds may be put off more than the other, resulting in this percentage reduction. This will endanger or lower the risk of the success of the young, maybe resulting in one of the young not surviving to fledging. 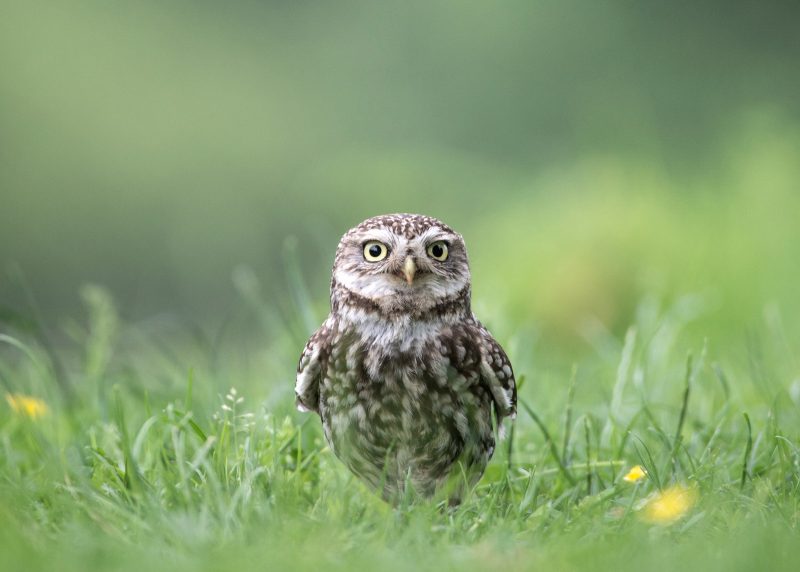 Whether these birds are protected by law or not, a photographer has a moral duty not to disturb a bird in its occupation of the nest. In some cases, there are reports of nests of Schedule 1 birds being surrounded by crowds of photographers.

By far the best way of photographing these owls is learning where their regular perch points are. A little owl’s main hunting technique is to perch on a good vantage point and scan the ground for prey. This involves reconnaissance and time spent in the field observing.

How to encourage visits from little owls

Once established, they can be encouraged a little by placing tiny amounts of mealworms onto the tops of the perches. If this is issued regularly, the owls will soon learn that it is a reliable snack point and will frequently visit that perch. Then, quite simply, set up a hide on that perch, and it is a fairly safe bet you will get a little owl on that perch, especially in the breeding season.

Mealworms are probably the best choice for this, as they are readily available and store dried for a long time. They are so small that they can be put out in sensitive distributions that will have little impact upon the owl’s diet. 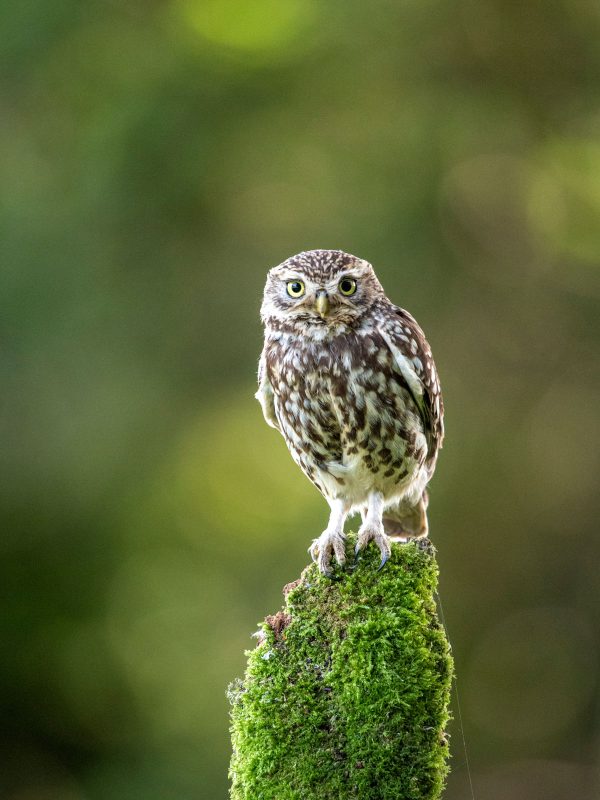 It should also be considered that the little owl is in rapid decline across Europe, due to poor soil condition caused by intensive agricultural practices. It is now classified as extinct from Denmark. The little owl’s main diet consists of insects and earthworms, but this soil fauna has dropped alarmingly. This is due to the use of pesticides, and more significantly for the little owl, worming drugs used on cattle.

Consequently, the little owl is bearing the brunt of this. It is only in areas where soil regeneration is taking place, such as rewilding sites, that the little owl population is strong. Therefore, putting out a few meal worms here and there will have little impact.

How to photograph little owls within the hide

Once set up, entering and leaving the hide should be very sensitively dealt with. With that being said, I have had some pairs become so used to human presence that they just stay still until the photographer is inside the hide.

When you are in your hide, I would advise always having the camera tripod mounted. When the owls land is the time at which they are sensitive to disturbance, so picking up a camera and poking the lens through the hide port will disturb them and make them more nervous about returning. Use scrim netting in the ports of your hide, and have the camera and lens already trained on the perch that you expect – or hope – the little owl will land on. 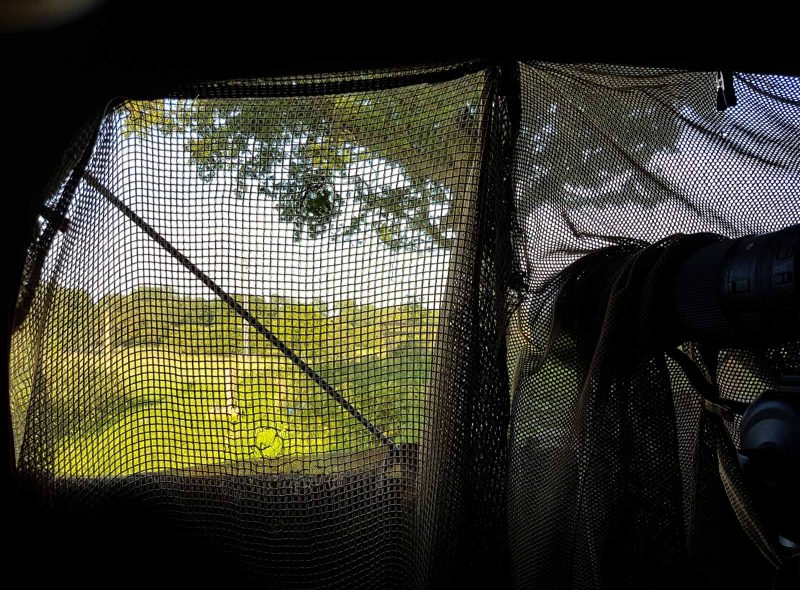 Once down, I normally give them a couple of seconds to settle before focusing on the eye to lock the focus, recompose the shot, and take a burst of shots. Be aware that the sound of your shutter will probably catch the attention of the owl, and it will stare directly at you with fury.

Take advantage of this eye to camera shot, and fire another burst. If your hide discipline is good, and you make no sudden movements or loud noises, then little owls are pretty bombproof. 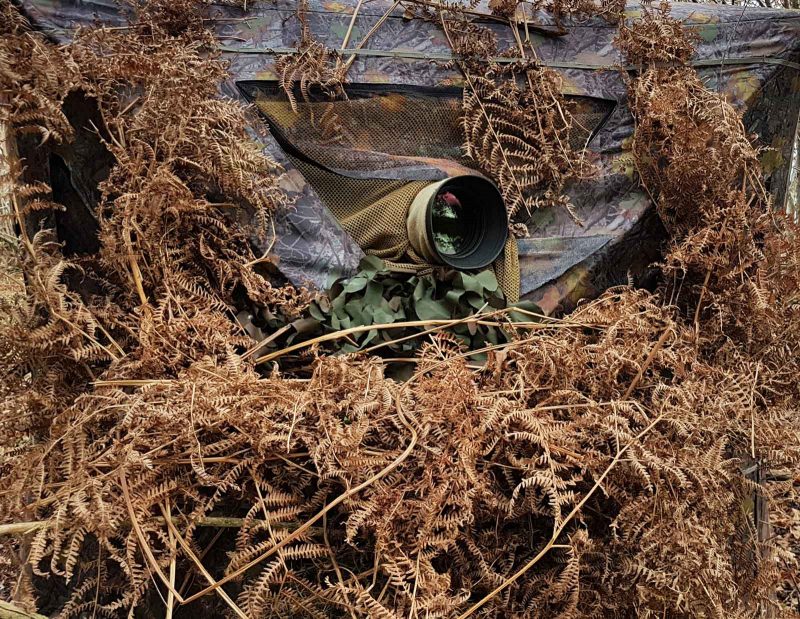 How to photograph in-flight

Because their visits can sometimes be so frequent, it is relatively easy to get in-flight shots. This can be done in quite a low-tech way. Learn the flight direction to and from the perch. Then compose the camera just off-perch and pre-focus the lens as accurately as you possibly can on the line of flight.

I do this by continuously watching a line of flight, and then just sinking a small twig into the ground under that flight line, so that I can focus easily on that point. Then I switch auto-focus off, otherwise every time I press the shutter button the camera and lens will focus on the oak tree in the background. 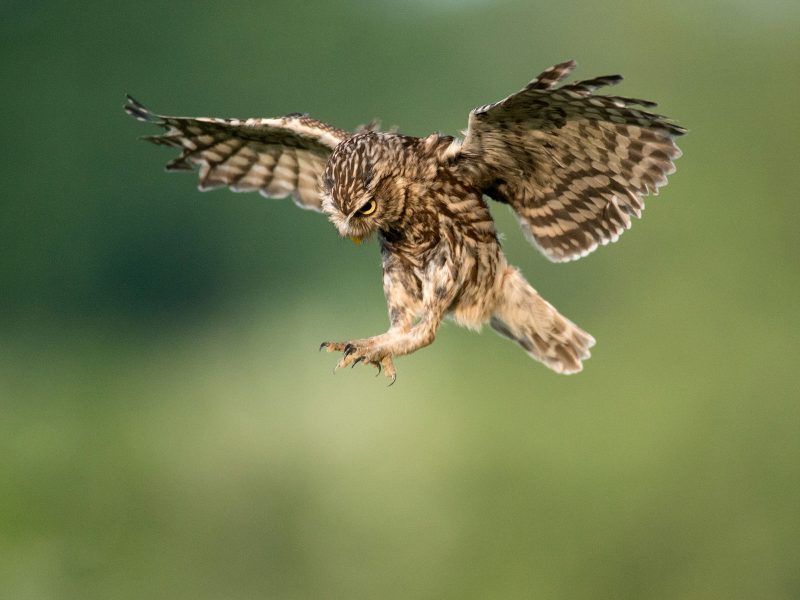 The owl is in flight, so we need a reasonably high shutter speed depending on the type of image you wish to capture. If you want to freeze the action of the wings, you probably need at least 1/2500th sec. Additionally, to give us a little bit of wiggle room on the plane of focus, I suggest stopping down to something like f/11.

The light levels will determine how far you can push this, as well as the ISO handling of your camera body. In order to achieve the required shutter speed at the smaller aperture, you will need to increase the ISO. For this reason, it is better to do this method of in-flight photography in good light. 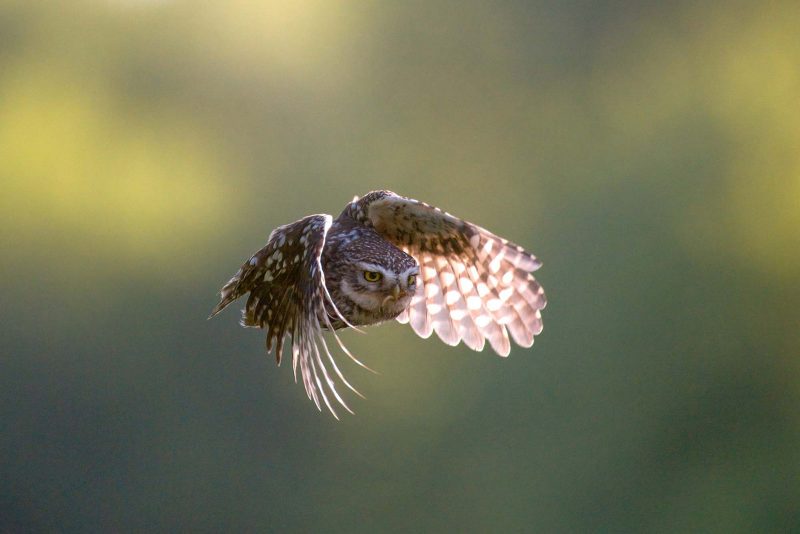 Next, put the camera in high-speed drive, and when the owl takes off simply depress the shutter. You will have many images of thin air. But you will possibly also have some real gems of this beautiful owl in mid-flight.

It is a useful technique, and in some sessions I have gone home with possibly 50 full-frame, sharp in-flight images that were fairly easily achieved. One additional point: I would ensure the background is significantly far away, in order to keep it soft even with the smaller aperture. I also try to angle the camera, both in height and lateral angle, so that the background is of a tonality similar to the owl.

Read more: How to Create a Beautiful Bokeh

If it is a bright sky behind, you will probably get a dark silhouetted owl, unless you calculate all this in manual exposure. I would also argue that having a pale white background is probably less pleasing than a soft landscape behind. Have a look at the images to see what I mean by this. 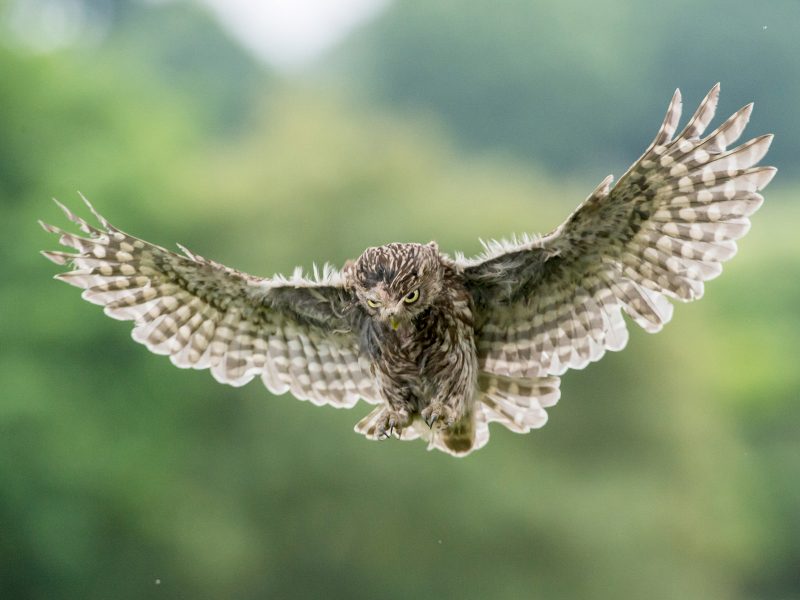 I actually plug in a cable release when doing this technique. Holding your finger upon the shutter, waiting for the owl to fly, can be quite tiring as a hide session progresses.

It is far simpler – and more comfortable – to just have your hands in your lap, feathering the shutter release on the remote and just depressing when the owl flies. I have found I can even sip coffee at the same time! 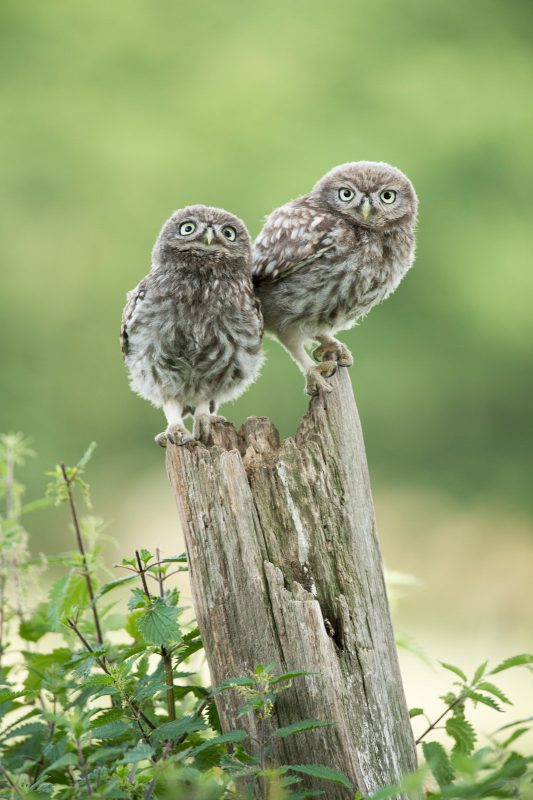 One of the most joyous and satisfying times photographing little owls is when the young have left the nest. Not only are they initially clumsy, but they are cute little balls of fluff that will sit on a perch for long periods of time.

They will sometimes want to share the same perch, perhaps two or three at a time. They can then provide intimate images as they groom each other, all squeezed and huddled together. You may even get adult birds coming in to feed them. 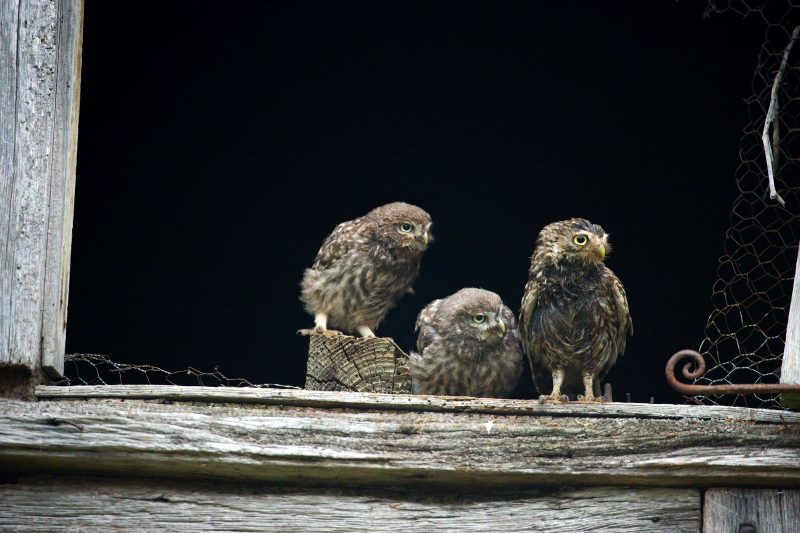 In essence, the little owl is a dynamic, pugnacious, and very active owl, often visible at a convenient time of day for photography. For me, it has probably been the easiest owl species to photograph. However, a photographer should never become complacent: ensure hide discipline is good, particularly getting in and out of the hide, and of course ask the landowner’s permission before setting up a hide.

It surprises people that the little owl is not native in the UK: it was a Victorian introduction that naturalised easily. Despite the impact that non-native species can have on an ecosystem, once you have spent time with these owls, it is difficult to condemn them. They have such character and dynamism that they would arguably be a sad loss from the British countryside.