How to Photograph Kingfishers 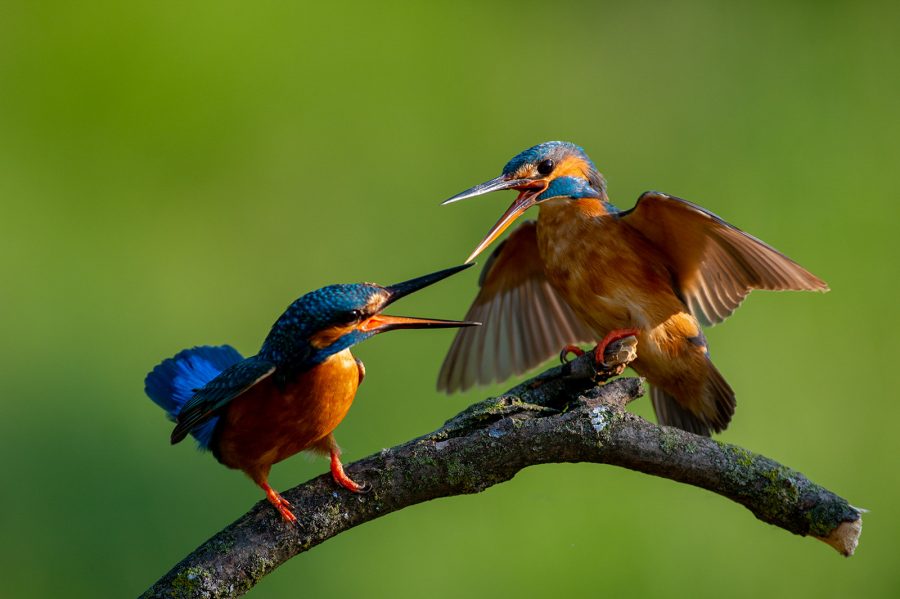 As birds go, the kingfisher is probably one of the UK’s most beautiful, easily identified, and most sought-after birds. We have grown up with imagery of it; a kingfisher is as iconic and recognisable as an owl. Unfortunately, most people have never seen one – let alone photograph a kingfisher.

At best, they may have seen what I call the ‘Cobalt Bullet’ as it skims just above the water’s surface along the edges of lakes and river systems. It is a gem of a bird, and an indicator of the health of our watercourses. Put quite simply, unhealthy river systems mean less invertebrates, meaning less fish, resulting in fewer kingfishers – one of the top predators of freshwater fish. In fact, they were virtually absent until we started to clean up our rivers in the 1970s. 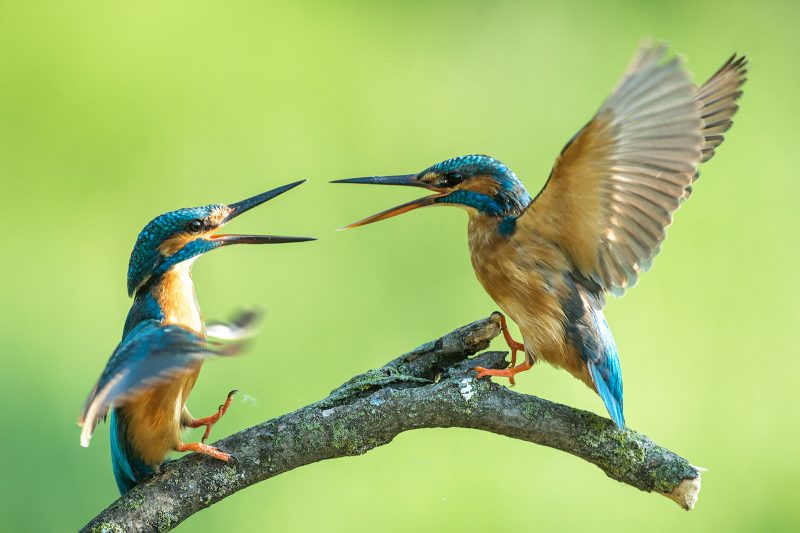 Even where rivers are now healthy and sustain good populations of fish, the kingfisher is still a low population density bird. A single pair requires a 1km stretch of optimal river or lake habitat in order to maintain a territory. 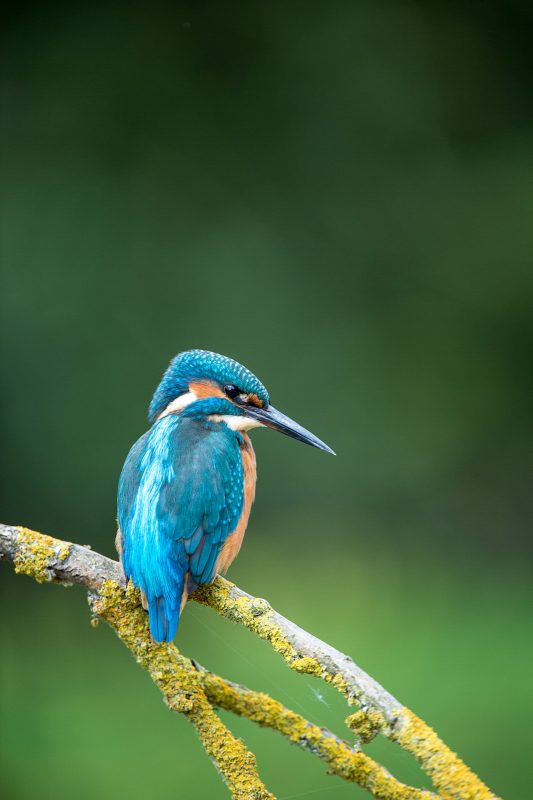 If seeing a kingfisher is difficult, to photograph one is even more difficult. They are extremely sensitive to movement and normally any approach sends them 400 metres away from you in a flash. I am fortunate enough to have worked closely with kingfishers for over 10 years now, and as well as learning how to do it I have also learnt how not to do it.

How to find kingfishers

The first thing to do is to establish presence. There is no point in trying to set up for a shot if the kingfishers are simply not there.

So, time spent on reconnaissance is time well spent. This requires visiting your chosen area regularly and scanning visually – but also try using your hearing as kingfishers have quite an unmistakable call which is easy to recognise and, like a lot of birds living close to water, is of a high pitch in order to travel long distances across water.

Once you have established that kingfishers are present, it must be stressed at this point that, in the UK, they are a Schedule 1 listed bird under the Wildlife and Countryside Act.

This law makes it an offence to disturb kingfishers in their occupation of a nest. This is also a law that I value, although there are scant prosecutions and I feel it is increasingly being abused for many species, including kingfishers, by photographers. 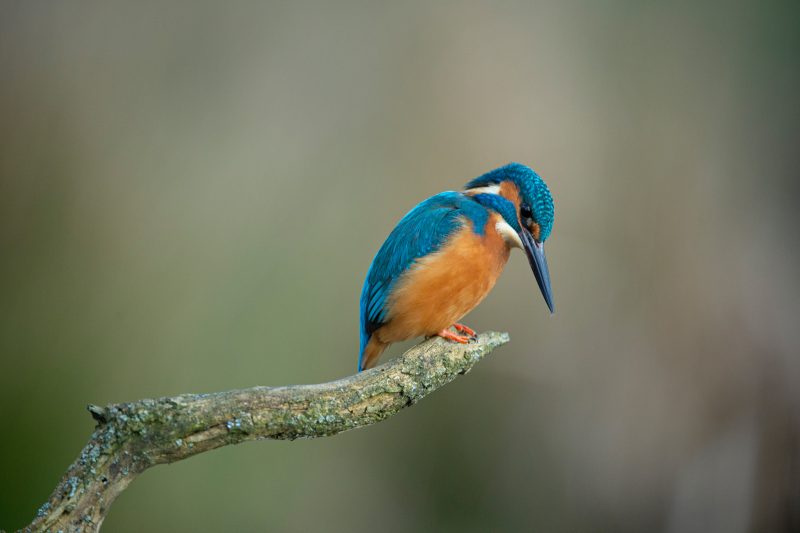 The key aspect of this law is the word “disturbance,” and arguably it can be construed that even if the bird just looks at you, then you have disturbed it.

I know some photographers feel that certain individual animals are “bombproof” as far as their presence is concerned, and I am often told that barn owls or kingfishers still bring food in for their young despite the presence of the photographer.

However, how do we know whether the adult birds are holding back and bringing in just a percentage of the original food intended for their young? Possibly they are totally undisturbed, but how can we prove that and is the reduced feeding of the young detrimental to their chances of survival?

Quite simply, this law exists to protect these birds and it is not acceptable or ethical to contravene it based upon your own summation of the animal’s activity just for a photograph. 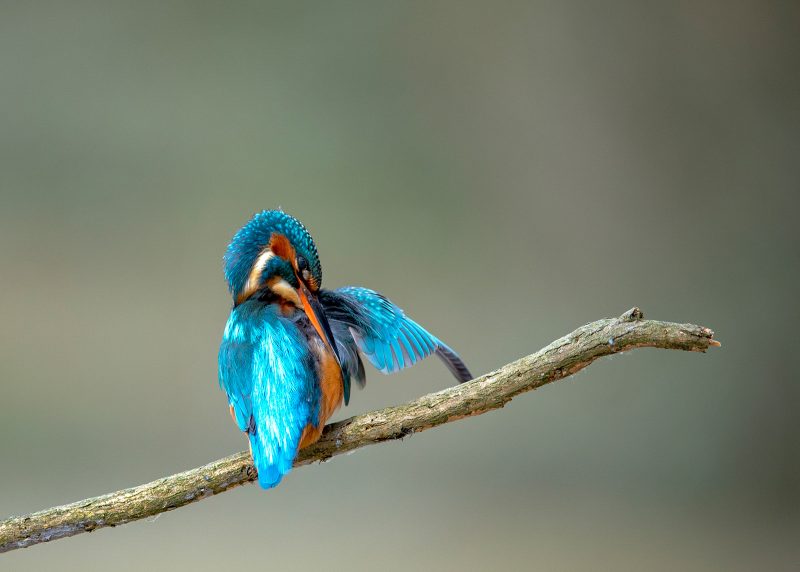 Anyway, let me step off my ethical soapbox and deal with the task at hand: that of how to photograph kingfishers.

You have to get close to get a frame-filling portrait of a kingfisher as they are surprisingly small, and even with a 500mm lens on a full-frame sensor you looking at about 4 metre camera-to-subject distance. This puts kingfishers outside the realm of stalking and means the use of a hide.

Setting up a photography hide

Firstly, you will obviously need the landowner’s permission for setting up a hide. Using a hide means your movements are hidden and you are comfortable. A kingfisher’s acuity is generally targeted on movement, so simply using camouflage or a bag hide is often unsuccessful.

Whilst they’re better for kingfisher photography, hides are also more comfortable; there is nothing like a few hours in a hide next to a beautiful river or pond with a nice flask of hot coffee next to you, watching kingfishers.

In this way, you will get undisturbed images of kingfishers – sometimes for an exceptionally long time. My record is over 3 hours of one kingfisher sitting right in front of me! 20 to 30 minutes is not uncommon for sightings. 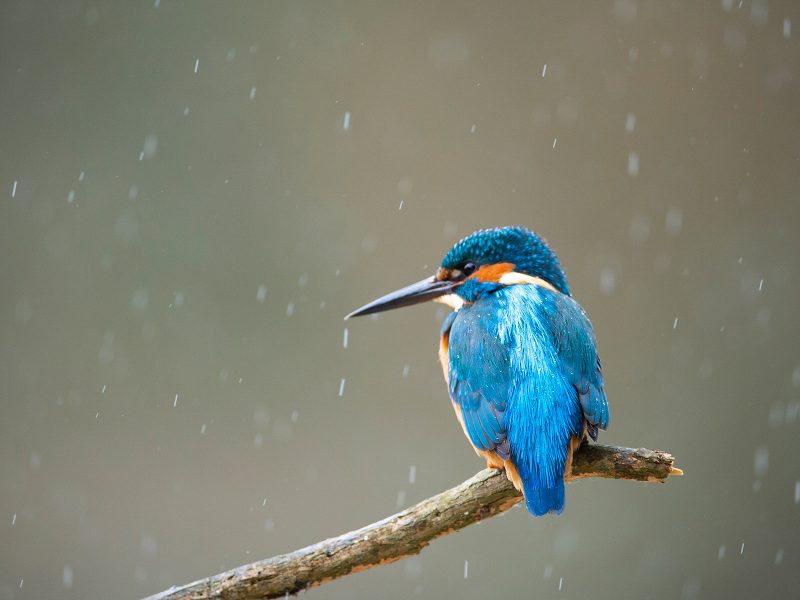 Now, you can set your hide looking onto a convenient perch that you know the kingfisher uses, or indeed introduce your own perch, and the bird will often do the rounds throughout the day visiting its reliable fishing sites.

This method may require some waiting, though. A better way is to find concentrations of fish. These can occur naturally, if say a log has fallen across a stream and fish are concentrated downstream of the obstruction.

A kingfisher will soon see this opportunity. If you sit there long enough, especially at certain times of the year (i.e. when they are feeding their young), you’ll be sure to get sightings of them visiting such a reliable source of food. 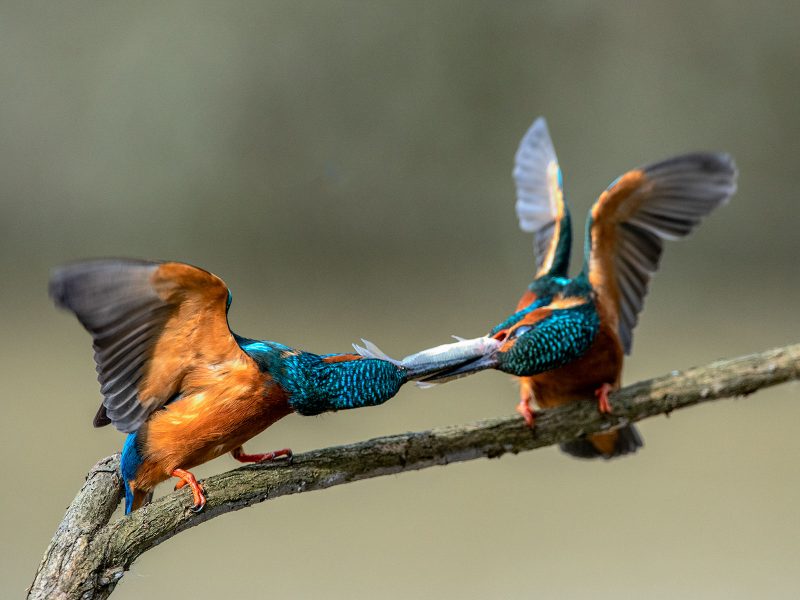 Kingfishers will readily take to a perch placed in a good position by the photographer. This perch can be carefully chosen for appearance and for behaviour.

A kingfisher looks gorgeous on a flimsy, lichen-covered twig, but they can sense if the twig is not strong enough when it comes to bashing their prey to death. For this, they like something more substantial.

You can often find these perches occurring naturally. Examine a favoured perch, found in an active territory, when the bird is absent and you may notice that it is glittered with fish scales indicating regular usage. 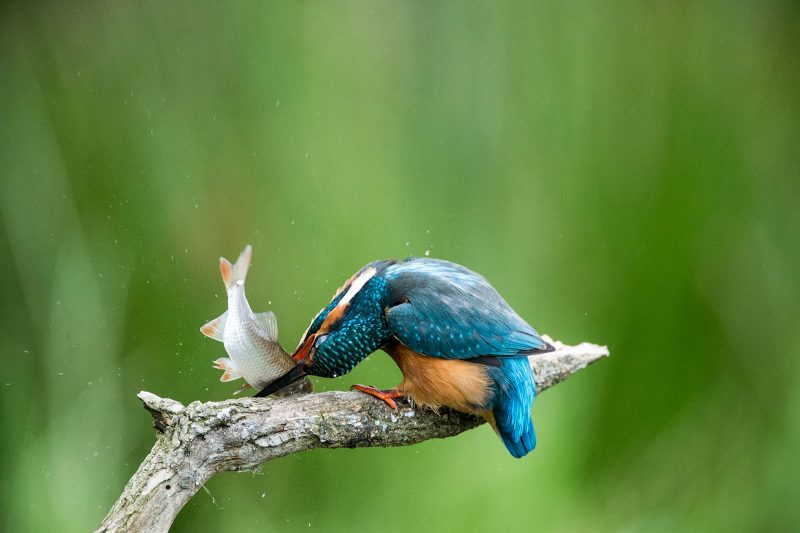 They bash the fish in order to kill it, as well as to break any bones or spines. Many inexperienced kingfishers die in their first few weeks when they try to swallow a fish that they should have bashed more.

Incidentally, parental care of kingfishers is rather brief – normally just one week after leaving the nest – and 50% of the young are dead in the first week. Meanwhile, the adults are at it again raising the next brood.

It is a numbers game for them: knock out as many young kingfishers as they can in the season, look after them for a week after they fledge, then leave them to it and only the fittest fishers will survive. 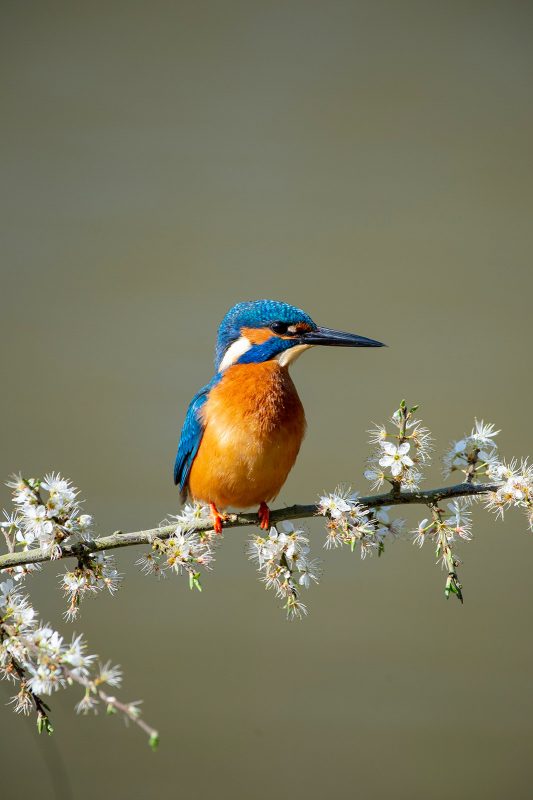 When choosing your perch or placing it, think hard about your background and your placement of the hide, normally ensuring the background is more or less the same tonality (i.e. not in bright sunlight relative to the perch).

If during the day the perch does go in shade but retains a bright, sunny background (which often happens on a river or lakeside bank), fill-in flash can save you. This works better than drawing out the shadows in post-production, which just gives the image a milky look.

Background distancing, which is having it far from the subject, will give you that nice blurry background that is highly sought-after. Even at aperture f/2.8, a subject which is placed right in front of a busy background will have a soft bokeh (but it won’t be decluttered).

Simply, the best way of controlling the background is by putting it a long way away, and another good way of achieving this is to ensure your lens is level with the perch and not pointing down onto it.

When your kingfisher lands, this is the moment they feel at their most vulnerable, so do not jump to your camera. Sudden movement, such as a slight recomposing of the frame, will show you the rear end of a kingfisher as it disappears across the lake!

Give it a few seconds to settle down – it is not there for the view; it is there for the food. However, once they relax they are tolerant. Have the camera or lens on a tripod, with scrim netting around the lens and making sure it is clipped underneath the lens, or else the kingfisher will see your hand movements through the gap.

I tend to keep my tripod collar loose, or semi-loose, so I can easily rotate from landscape to portrait format. This helps to achieve the best composition, as well as provide a wider portfolio of images in the end. 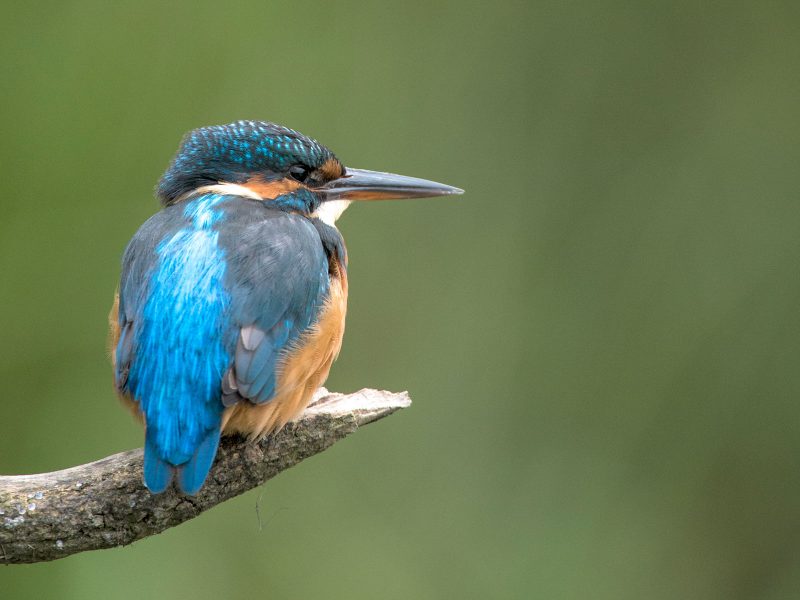 When the kingfisher initially lands, you only need a sufficient shutter speed to minimise camera shake as the bird will tend to freeze between movements. Something like 1/500th of a second, which means a lower ISO speed is possible (and consequently less unnecessary noise).

However, if you want to get the bashing-fish shot then you should be prepared to ramp up your ISO to give you a shutter speed of about 1/2500th sec. I prefer to do this change with my eye to the viewfinder, knowing exactly where the buttons and controls are without looking.

I have spent a lot of time looking through long lenses at this beautiful bird and can now tell by the feather movements around the face when it is about to dive. A quick press and rotation of a wheel ramps up my ISO to give me the faster shutter speed required. This will hopefully freeze the motion of the bird and fish, as well as the water droplets as it bashes the fish. 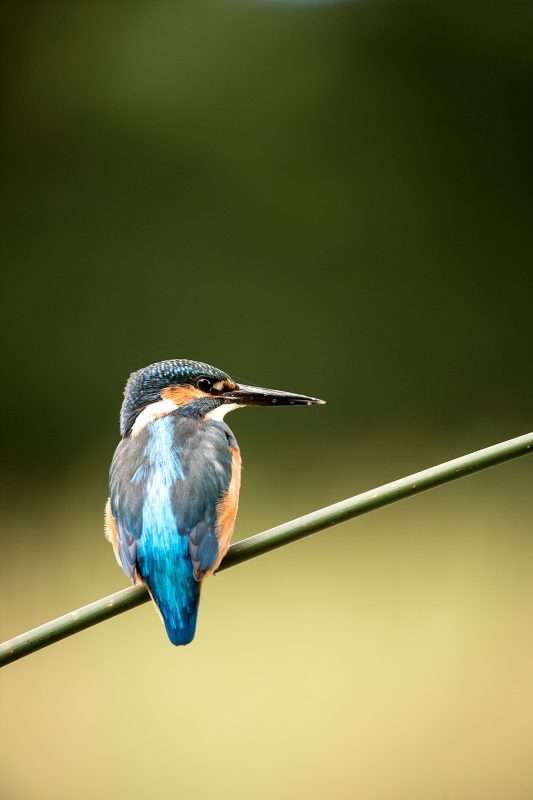 I generally prefer the view of the back of a kingfisher. It gives me the beautiful cobalt stripe down the back, vividly mixed with the darker blue wings.

Regarding autofocus, I tend to use single-servo (also known as AF-S) with a single central autofocus point, which I always focus on the eye. If you use a continual-servo AF mode (AF-C), your focus may lock onto the back, the tail, or the perch.

So, my method is to focus on the eye of the bird in single servo, recompose for aesthetic purposes, and fire a burst of shots. Then refocus, recompose, reshoot, and repeat. 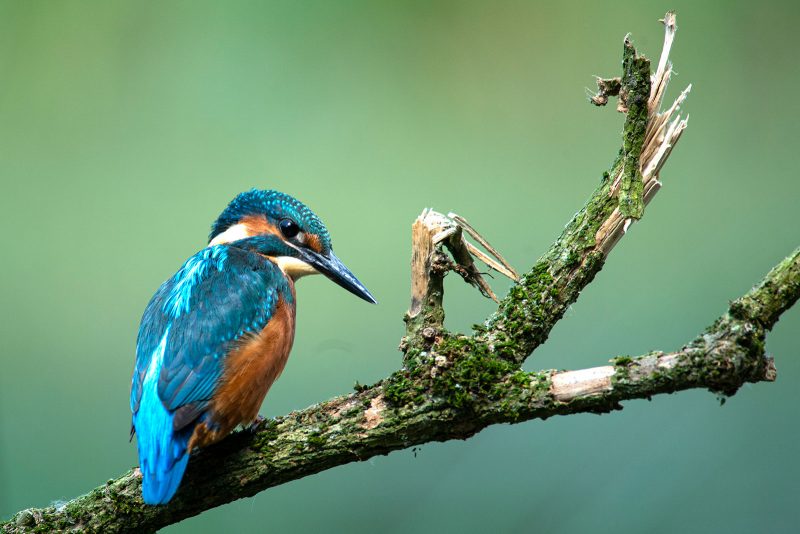 Kingfishers will often call and announce their approach, giving you time to get ready. Keep in mind, though, that they will also often land silently – especially juveniles who are probably just about to be kicked out of the territory.

You may also discover that they are fickle birds. One day you’ll get 20 visits, and the next day none. This is frustrating, but it is in their nature, which makes it all the more gratifying when it works. When it does work, and the kingfisher lands in front of you for the first time, it is quite simply breathtaking. Whether you get a shot or not, make sure that you enjoy it as you will never forget it.

So, in conclusion, photographing kingfishers is both hard and easy. Poor preparation and fieldcraft will result in nothing but frustration.

Getting it right, however, will result in memories to last you a lifetime and a wall adorned with prints of this iridescent, elusive gem of a bird. Good luck! 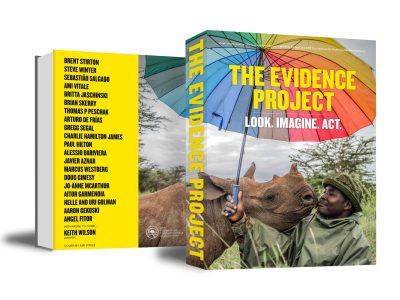 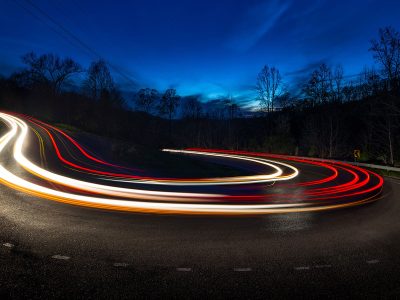 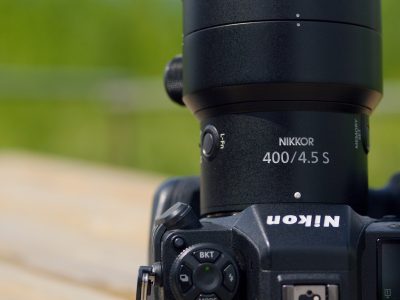