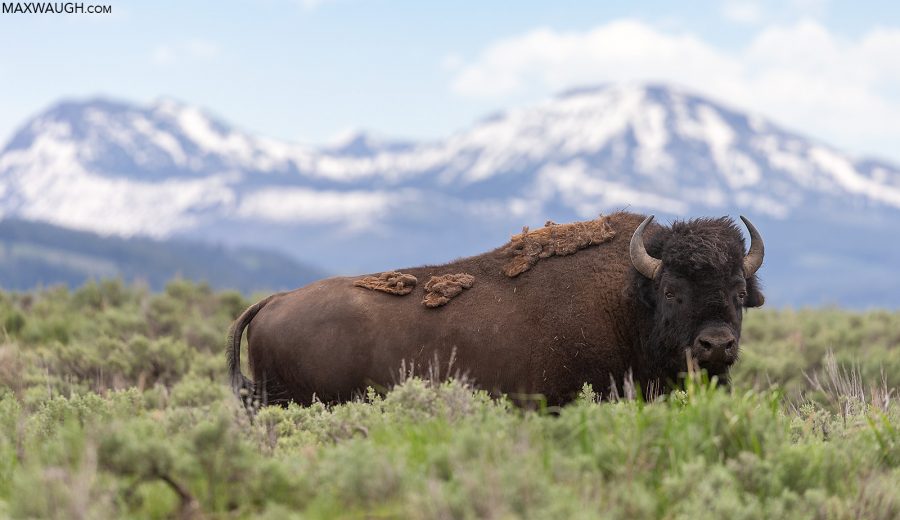 When thinking about iconic wild animals, most people normally focus on the large mammals of Africa, or perhaps the big cats found in both Africa and Asia. In the Northern Hemisphere, bears get a lot of attention. But there’s another icon of the north, unique in shape and appearance, which evokes a sense of history and the lost wilderness of the past: the bison.

Bison, commonly nicknamed ‘buffalo’ in North America (it is, of course, not a true buffalo, like those found in the Eastern Hemisphere), aren’t confined to this area alone. The European bison is similar in appearance, and has been reintroduced as part of rewilding efforts in eastern Europe. South Asia’s gaur, the world’s largest bovid, is known as the Indian bison.

Both are impressive animals, but it’s the American bison that summons feelings of nostalgia and recalls tales of the Old West – ironically, a time when the species was nearly wiped out. It can still be found roaming those wide-open spaces, helping enhance expansive plains, rolling sage-covered hills, and rugged mountains.

Perhaps for this reason, the bison was recently named the USA’s national mammal. It is truly an icon of the west, and our approach to photographing it can go a long way in conveying a proper sense of place for the species – both in its physical surroundings, and in history.

Where to photograph American bison

Before we can document the species, we need to know where to find them. By the start of the twentieth century, a population that once numbered tens of millions of animals was reduced to a few dozen as part of westward expansion.

Through rigorous conservation efforts, the species was saved and slowly introduced back into small pockets of the western landscape. Here are a few of the locations where wild bison can be found today: 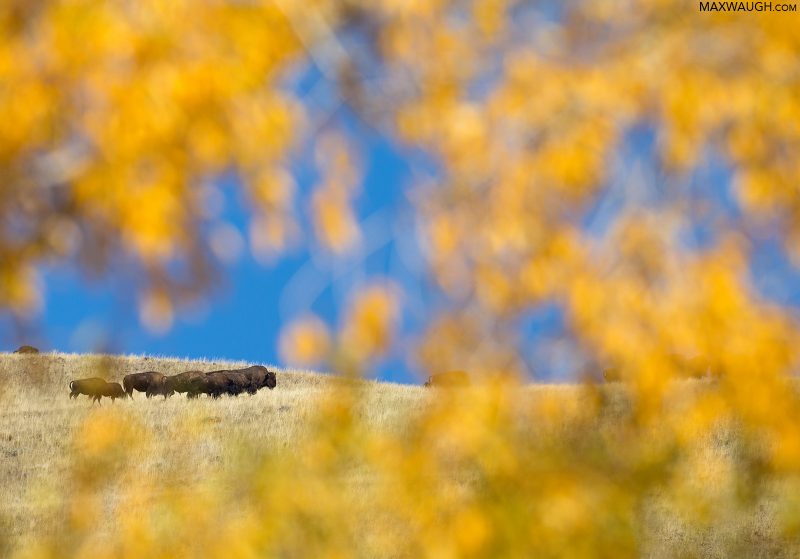 Of course, most people associate wild bison with Yellowstone, which was home to the last remaining herd from which most of today’s wild animals descend. Both Yellowstone and Grand Teton National Parks are home to thousands of bison, making it the best place to photograph them on the continent.

Read more: Where to Photograph Wildlife in North America

Not only is this species distinct among North American animals in terms of size, but it also sports easily recognisable features that set it apart.

A massive head and shoulders, incredibly useful in winter for shovelling away snow to access food, exude strength and power. Curved horns rise up on each side of an occasionally baleful stare, warning passers-by not to get too close (advice that’s not always heeded by park tourists).

Thick, brown fur protects from winter cold, before shedding in balls of soft fluff caught on tree branches, or the occasional woolly rug that simply falls to the ground. 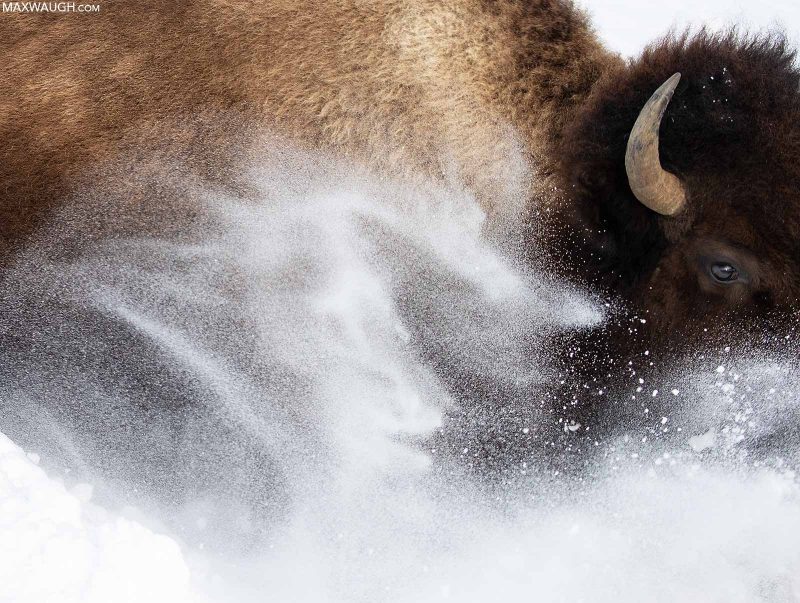 The bison is a very photogenic creature, and capturing intimate portraits that show off its strength and power is a common goal for photographers. Depicting the muscular shape, bulging eyes, or perhaps the occasional steamy cloud of bison breath, helps enhance the already impressive image of the bison.

However, make no mistake: you should never sacrifice safety in exchange for capturing an intimate portrait. In Yellowstone, a place where bears, cougars, and wolves roam, the bison is widely considered the most dangerous animal in the park.

Every year, there are multiple incidents involving run-ins with bison. Those hoping to pose with what they consider a docile, cow-like creature have been gored in attempts to take a ‘bison selfie’. They have been put in hospital by an animal that weighs a ton, can run 35 miles per hour, and is occasionally a bit moody.

With the help of a longer telephoto lens, it should be fairly simple to obtain close portraits of bison in all their glory, while maintaining a safe distance.

They can be cute!

It’s hard to believe, but all bison start out looking rather adorable! As calves (nicknamed ‘little red dogs’ based on their colouration and appearance), they not only look cute, but exhibit a lot of youthful energy.

Tender moments with their mothers, curious exploration of their new surroundings, and a lot of playful frolicking, often with other calves, present photographers with a number of fantastic photographic opportunities. 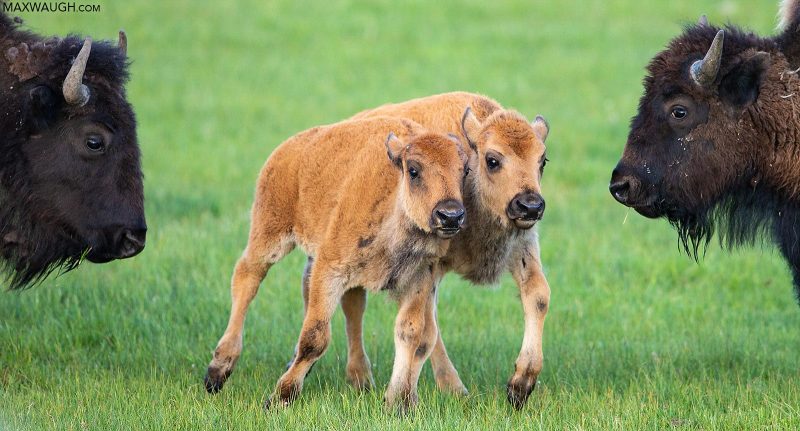 When photographing calves, it’s important to find them first thing in the morning when they have the most energy. Often this is right before sunrise, as morning sunlight seems to induce nap time. But, if they remain awake and energetic, the warm glow of a little red dog in golden light is hard to beat.

The animal in its environment

As photographers, we’re often encouraged to ‘go wide’, and think about the bigger picture. That is, eschewing the popular close-up portrait in favour of a view of the subject in its greater surroundings. This strategy applies to bison more than most other animals. 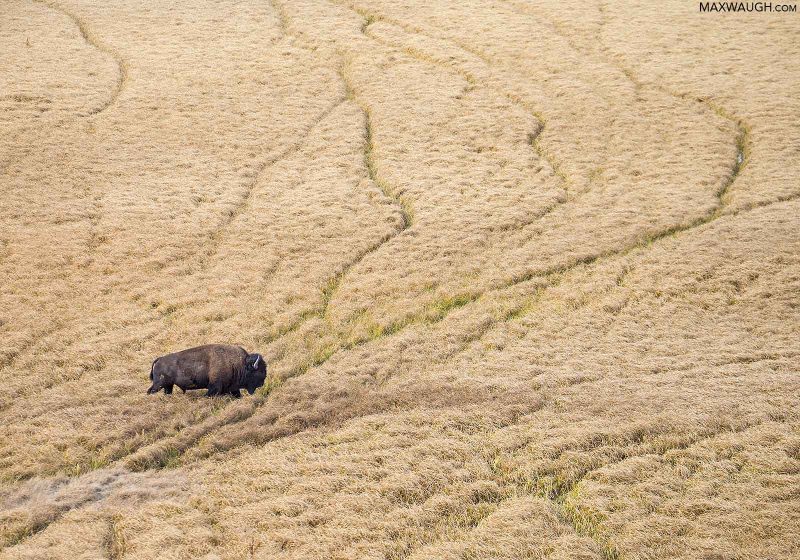 The contrast is heightened in winter, when a stark, snowy landscape helps them stand out even more against desolate surroundings. If thermals are nearby, it becomes an almost alien landscape, with the familiar bison silhouettes grounding the scene in reality.

It’s important to look at the wider view with bison because they’re so tied to the traditional, rugged, western landscape. The aforementioned feelings evoked by this animal are enhanced even more when it is seen roaming against snowcapped peaks, or crossing a rushing river.

It’s easy to imagine bison as slow, lumbering beasts. It’s true that they spend a lot of their time with their heads buried in the grass, munching much needed calories as winter approaches. But one can find interesting moments of action here and there.

In late summer, the rut begins. Large bulls join the growing herds of cows, kicking and rolling in the dirt, emitting throaty snorts and groans, and eventually getting down to business, with some violent clashes to determine breeding rights. 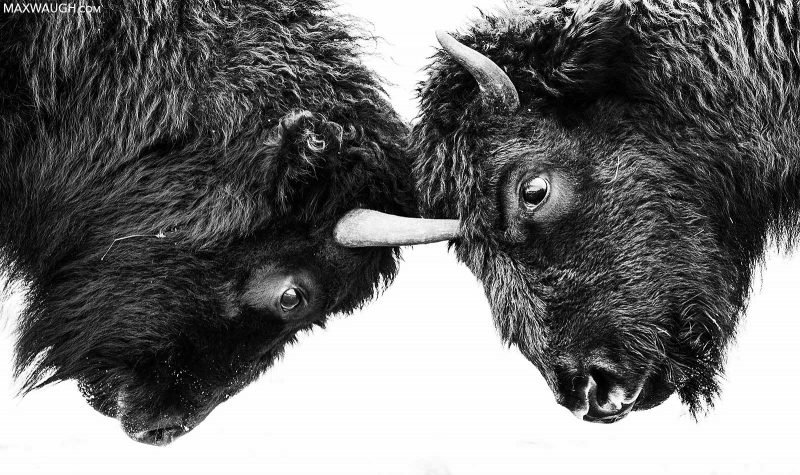 In spring, the calves provide so many active moments, from nursing with their mothers, to making mad dashes across the plains (a great excuse to practice panning with a slow shutter speed to capture motion blurs) as they expend their energy.

At the same time of year, river levels rise, and herds are often caught struggling against the powerful flow of currents fed by snowmelt. They look terrified going across, but somehow manage to make it safely most of the time. 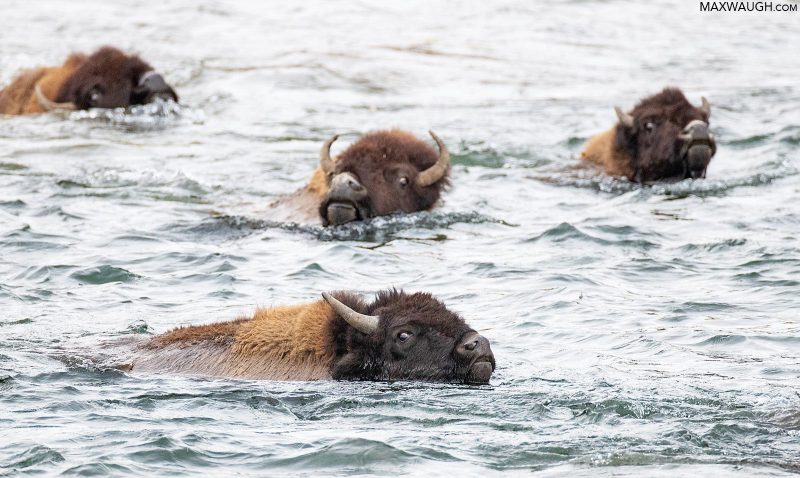 In winter, some bison manage to find pockets of warmth near Yellowstone’s thermal areas. It’s a great place to capture the classic frosty bison shot, with the added moisture from nearby clouds of steam crystalizing in their insulated coat.

Because this is an icon that harkens back to the Old West, employing a style of photography synonymous with a past era can often be quite effective in enhancing the mood of your photos.

Bison have to be one of the best subjects for black and white photography – a medium that emphasises shapes and tones – not just because of their historical significance, but because their shape is instantly recognisable, and works so well as a graphic element. 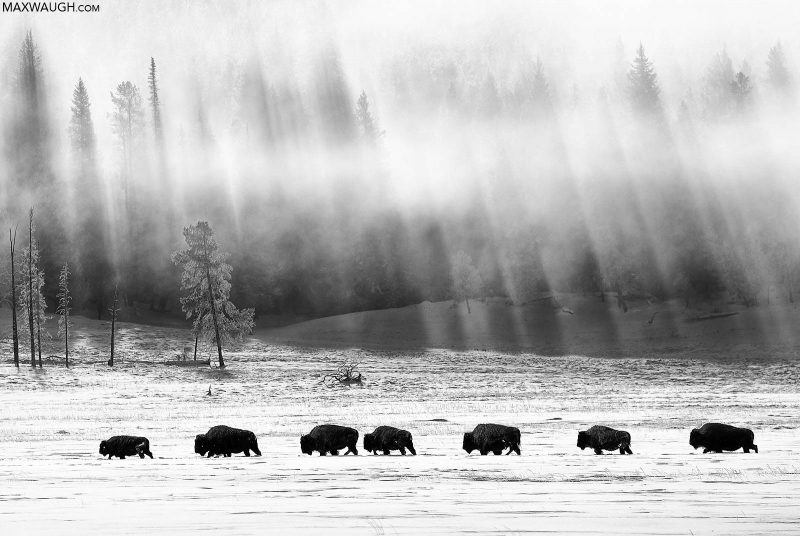 Some of the best monochrome photos employ high contrast imagery and bold tones. Shots of dark bison against a stark winter landscape play right into this idea. Don’t be afraid to experiment in post processing to see if a monochrome conversion adds an extra pop to your bison photos.

Thanks to its notable role in the history of the North American continent, its bold and powerful contours, and its beautiful, rugged environs, the American bison may just be one of the best photo subjects found in the animal kingdom.

If you have a chance to see this icon in person (from a safe distance, of course), think about how you can portray it in familiar, yet new, ways that will elicit an emotional response from your viewer.