How to Photograph Arctic Foxes 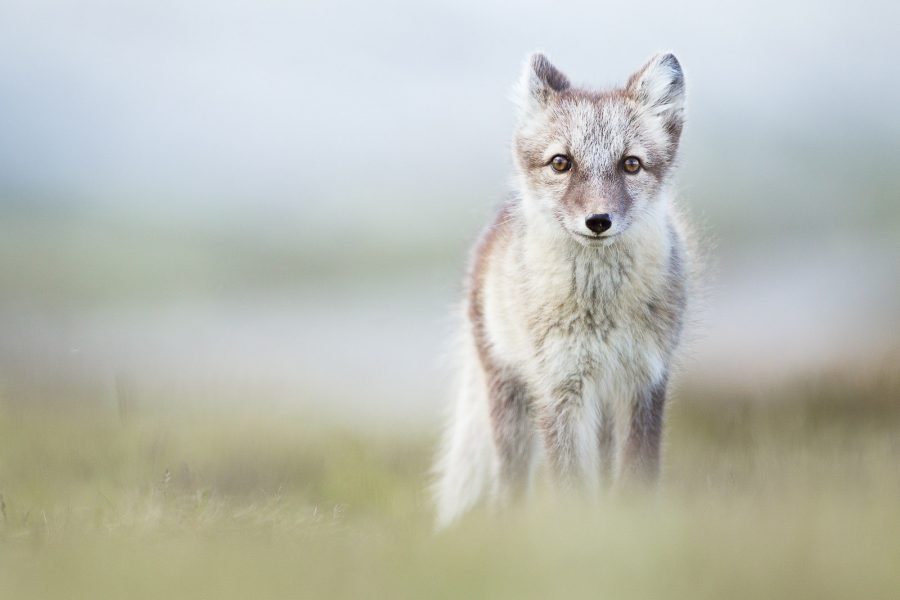 Their white appearance in winter makes the Arctic fox an interesting subject for wildlife photographers. In this article, I want to share with you my experience. Who does not dream about taking photos of a white fox in a snowy landscape? However, an encounter during summer is also something that shouldn’t be forgotten!

A couple of years ago, I was lucky enough to encounter an Arctic fox during the Arctic summer in Scandinavia. I was hiking through the mountains when golden plovers started to call and, all of a sudden, I spotted a strange animal – brown/grey fur and rather small size.

It was situation I always dreamed of, but never imagined I would ever witness. An Arctic fox ran down the gravel road, golden plovers making their alarm calls as I was standing there, totally perplexed by the surreal situation. 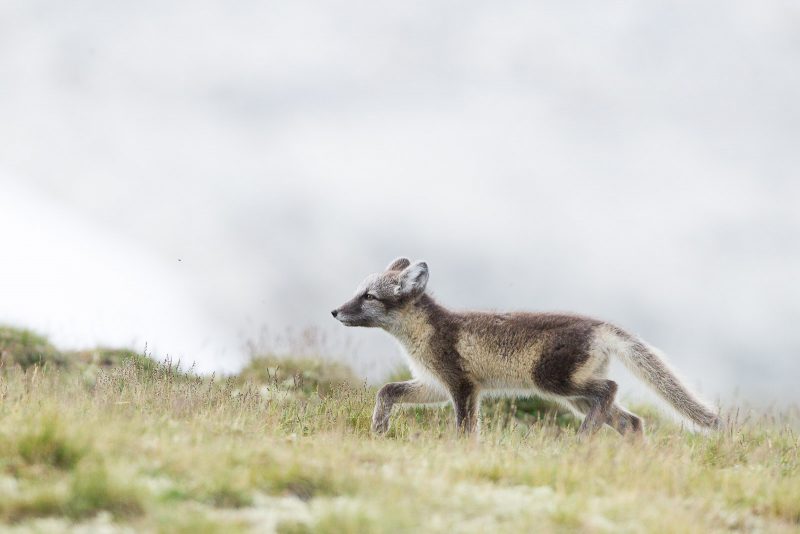 Where can you find Arctic foxes?

Arctic foxes live in the tundra regions of the Northern Hemisphere all around the globe. You would, therefore, find them in Russia, Canada, Greenland, Iceland, etc. Some live in the mountain areas, whilst others inhabit the coastlines.

The costal Arctic foxes generally belong to the blue morph. During summertime, they have completely brown fur that turns brown-bluish in wintertime. However, the best-known morph is the white one.

Foxes of the Scandinavian mountain regions mainly belong to the white morph. During summertime, they have a brown-white colouration that turns into the white winter coat in autumn. 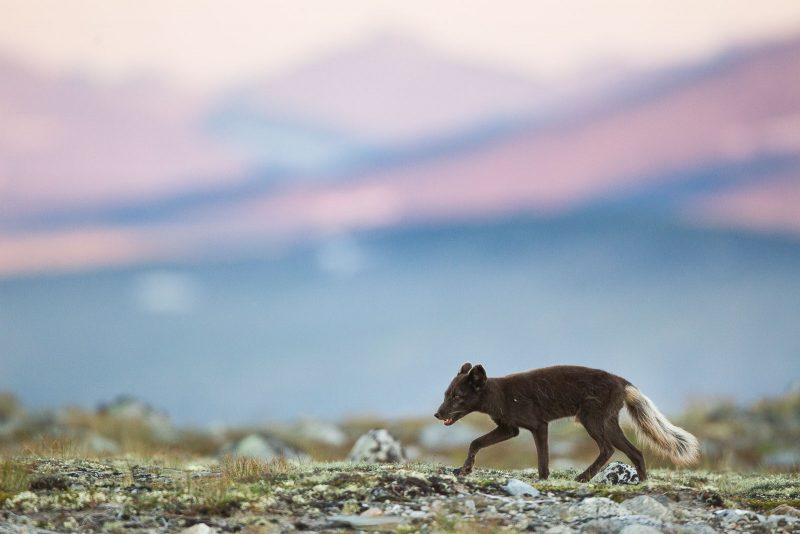 I followed the fox with great distance. Soon I realised he had a lemming in his mouth and he was on the move to a specific place. I sat down with my binoculars and watched the scene.

The fox did not stop for several kilometres until I saw another fox. All of a sudden, many more appeared in my field of view – Arctic fox pups. I knew that I had to come up with a plan on how to take photos of these animals.

How do Arctic foxes live?

Arctic foxes live in dens – sometimes for several generations – and these dens can reach substantial dimensions. They like to dig in frost-free areas with south-faced exposition.

Depending on food availability, Arctic foxes can have litters of up to 18 pups, and often females of the previous year’s litter remain with their parents to help feed and take care of the pups.

Foxes fertilise the area around the dens over time, making these places greener compared to the rest of the landscape. This is the best way to spot a den over long distances with your binoculars. 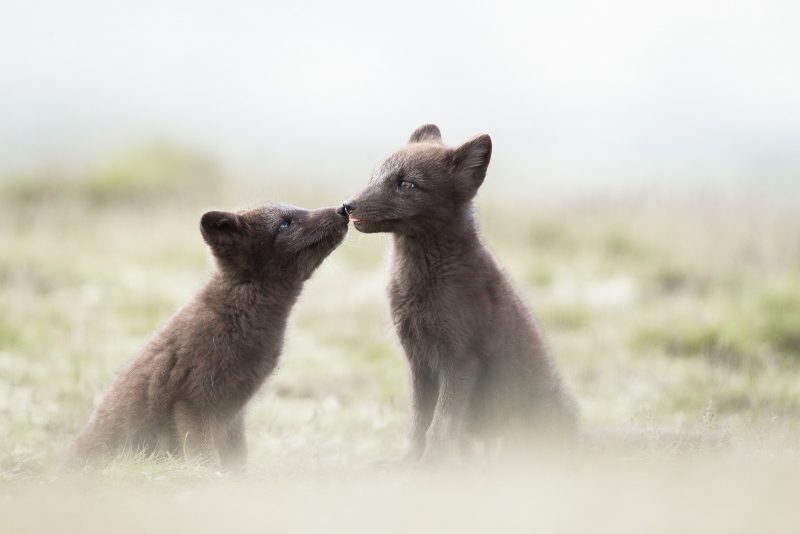 How to photograph Arctic foxes

I used a 500mm telephoto lens plus a 1.4x teleconverter and a crop camera body to get the maximum reach. However, before taking any pictures, I observed them for a full day to get to know their behaviour.

I went back to my car and prepared myself for a several-day trip into the mountains. My base camp was far from the den, but I had a good view with my binoculars. The pups were often sleeping and only woke up when one of the adults came back with food. After feeding, they started to play until they fell asleep again.

I tried to get a bit closer and used my camouflage poncho to hide and waited. Time passed and after one or two hours a fox strolled by. The pups ran towards her and I started photographing. Very far away but still, those were my very first arctic fox photos! 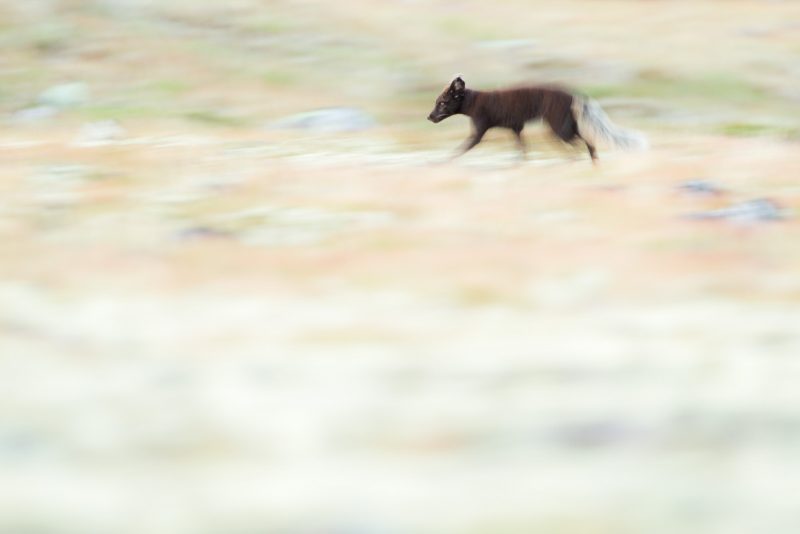 When taking photos, I always try to get a variety of different styles. It is not always important to take close-ups of the animals. Minimalism can be a great way to show the animal in its environment.

Long exposures reduce the photo to the main subject, as the rest of the photo is blurred. Black and white images can be used in harsh light conditions and give the photo a unique touch. In this particular case, wide-angle shots were not possible due to the distance you should keep from these animals.

When the sun was setting, the fur of the pups started to glow. Their silhouettes were “on fire” and I could take some wonderful photos. I noticed another fox far behind me and I was even able to take a photo of an adult fox in front of the mountain range.

Read more: Backlighting in Wildlife Photography – Creative Use of Light 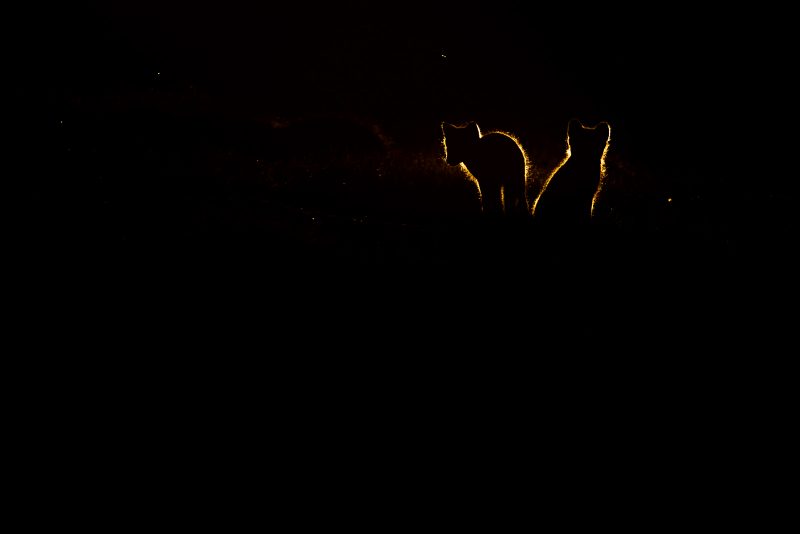 To be more flexible, I recommend taking photos of Arctic foxes without a tripod and by placing the lens directly on the ground or on a rock. A mini tripod could be used too. However, modern stabilisation systems of the camera gear work great and a tripod is not necessary in my opinion.

The next day, I woke up in my base camp before sunrise and positioned myself, well camouflaged, at a safe distance. After a long period, the first foxes showed up to enjoy the morning light. The pups laid down and napped in the sun for several hours. This was amazing to watch but, sadly, taking any photos was not possible.

After some time, the pups started to play and came closer to me. Then, they heard the sound of my shutter and took a few steps towards me. I stopped because I did not want to alter their natural behaviour. They started playing again and moved on.

There may be many Arctic foxes worldwide, but only very few in mainland Europe. Only due to the support of nature conservation programs, this species can survive in Scandinavia. Therefore, we should be aware of how we – nature photographers – behave. Keep your distance to the animals and be patient.

In Europe, the best place to take photos of Arctic foxes is probably Spitsbergen. Also, due to global warming, the conditions in the tundra become increasingly suitable for red foxes, which are almost twice as big as Arctic foxes. Unfortunately, they displace Arctic foxes out of their territories. The Arctic fox is endangered and requires special attention.