Where to Find and Photograph Wildlife in Japan 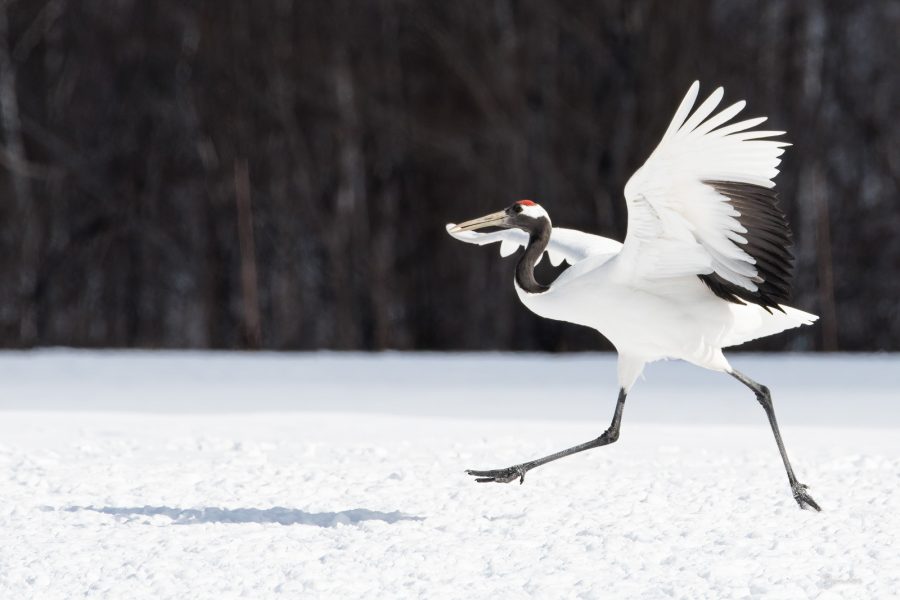 Kenya, India, and Costa Rica: these are a few of the destination locations that most people think of when talking about places to travel to for wildlife photography. But have you ever considered Japan?

It may sound odd, especially for a country known to have several of the world’s most populated cities, but Japan is well worth the visit for those looking to photograph unique and rare species.

Each season has something to offer – from the various songbirds in spring, flitting among the cherry and plum blossoms, to the Japanese serows hidden amongst the summer foliage, to the incredible displays of grace and beauty performed by the endangered, red-crowned cranes in winter.

Of the four seasons, winter is probably the best time to see wildlife in Japan. Less foliage allows for easier spotting of subjects, and the snow forces animals that would usually be higher in the mountains down into the valleys in search of food and warmer temperatures.

Winter also brings a variety of species that use the country as their southern migration point, and can only be seen in Japan during this season. 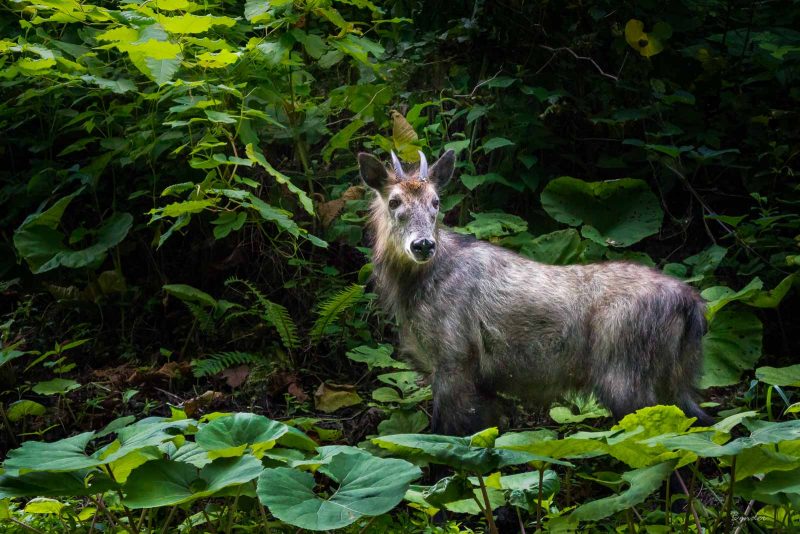 Due to this seasonal difference, I am going to share where to photograph wildlife in Japan during winter, with the occasional nod to other seasons too.

Far north of the bustling metropolis of Tokyo is the island prefecture of Hokkaido. A mecca of wildlife and wildlands in Japan, Hokkaido is home to the largest reserves of untouched natural areas in the country, and boasts six of the country’s national parks (including a UNESCO Natural Heritage site and a UNESCO Global Geopark).

This extensive collection of lands, protected by both Japanese and international agencies, combined with prefecture-run parks and reserves, makes the island of Hokkaido the number one location in Japan for wildlife viewing.

The red-crowned crane, a cultural icon for an eon in the region, disappeared from much of its historical range due to over-hunting. In Japan, the populations were thought to have been completely wiped out in the early 1900s. Although a small flock was found in the marshes outside what is now the city of Kushiro, by 1924 fewer than twenty remained.

After intense protection and with the help of local communities, the cranes have been making a slow recovery. Today, the red-crowned crane population in Japan consists of just over 1,000 birds, and is the second rarest crane on the planet.

One major factor in their recovery story was, and still is, the winter feeding provided at several locations. These feeding grounds make for the most ideal viewing, as the cranes come in around feeding times, before taking off again to forage in local farmers’ fields, or along the shallow geothermal rivers.

These habits present the perfect opportunity for a range of photographs to be created – including in-flight shots, courtship dances, and preening behaviour. 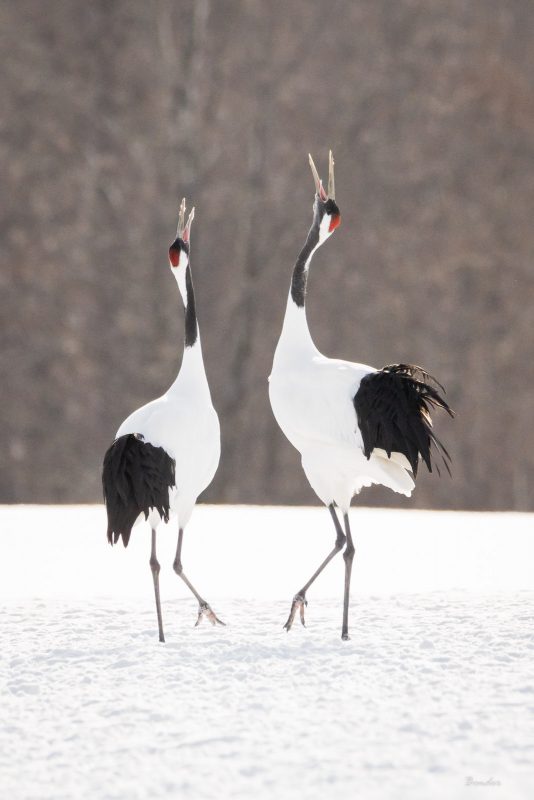 Read more: 5 Tips for Photographing Wildlife in the Snow

As one of the largest and heaviest raptors on the planet, with a wingspan of up to 2.5 meters (8 feet), the Steller’s sea eagle is one of the most striking winter visitors to Japan’s Shiretoko Peninsula. They hunt along the coast for fish (northern pollock are a favourite), but will search for alternative food sources when fish stocks are low, such as deer remains or small mammals.

The best way to observe and photograph these majestic raptors and their cousin, the more common white-tailed sea eagle, is to find your way to the small fishing port of Rausu, where several tour operators offer eagle-viewing cruises. 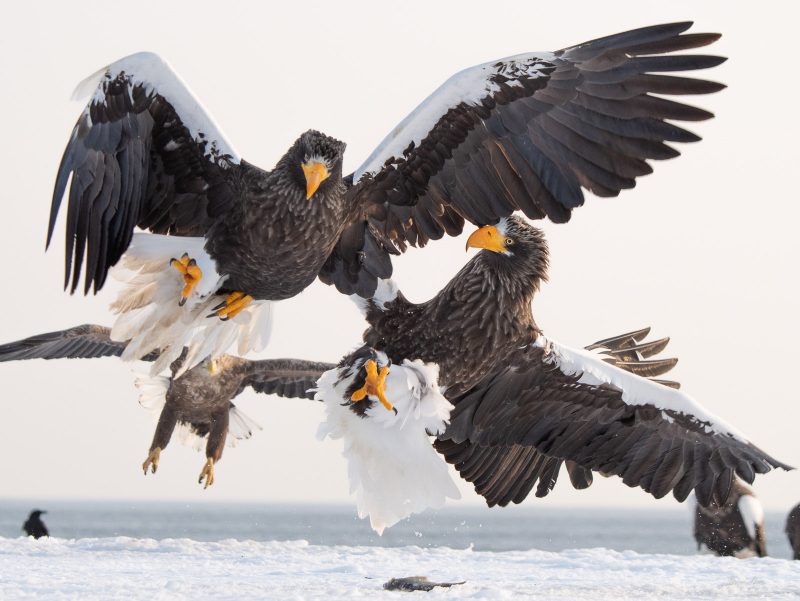 From the deck of the boat you can witness Steller’s sea eagles and white-tailed eagles performing aerial manoeuvres to capture and secure fish from among the ice flows, and keep them away from fellow rivals. Mid-air fights are common, and provide spectacular displays of strength and aerial agility.

Read more: How to Photograph Birds in Flight

Whooper swans are another winter visitor to Hokkaido. Coming down from the Siberian Arctic, they have found areas of northern Japan hospitable during the winter due to the geothermically warmed waters that keep large portions of places, such as Lake Kussharo, open year-round.

This unique environmental factor means that you can find high concentrations of these birds in relatively small areas. For optimal photo opportunities, be sure to have patience and listen for the swans – they often announce arrivals and departures with garrulous sessions. 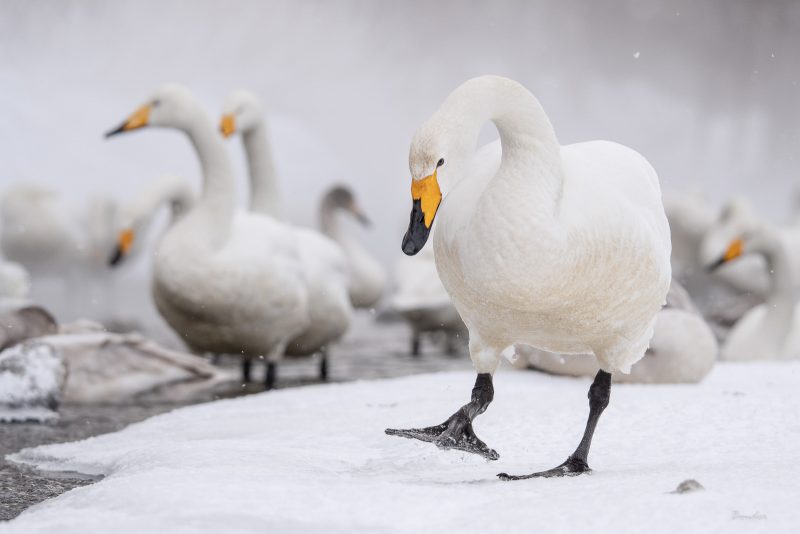 Read more: How to Photograph Swans

Seen regularly throughout the island, the Yezo sika deer subspecies is endemic to Hokkaido. Most of the year these animals are active from dusk to dawn. However, in winter they become much more active during the day, while searching to find enough food throughout the harsh winters.

The sika can frequently be photographed in the eastern parts of the island, specifically in areas of Kushiro-shitsugen National Park, Akan Mashu National Park, and along the coastal highway 244. Ensure you take care when driving in the early morning or late evening, when the deer are frequently crossing roads. 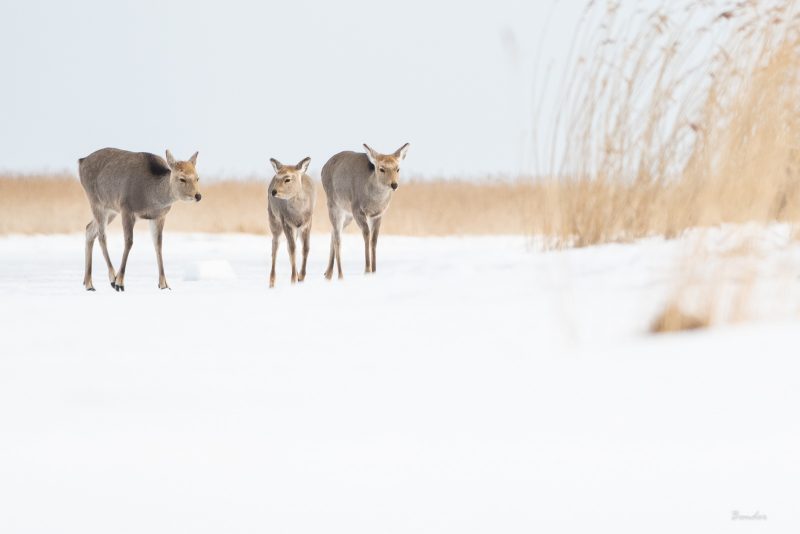 Unlike its brethren on the main island of Honshu, the Ezo red fox subspecies in Hokkaido tends to be diurnal in nature, especially during the winter season. Bright red coats against the white, snow-covered landscapes ensure they stand out to those paying attention.

The foxes are common enough that it is rare to pass a field that does not have the tell-tale track line through the snow, from where a fox has earlier patrolled. 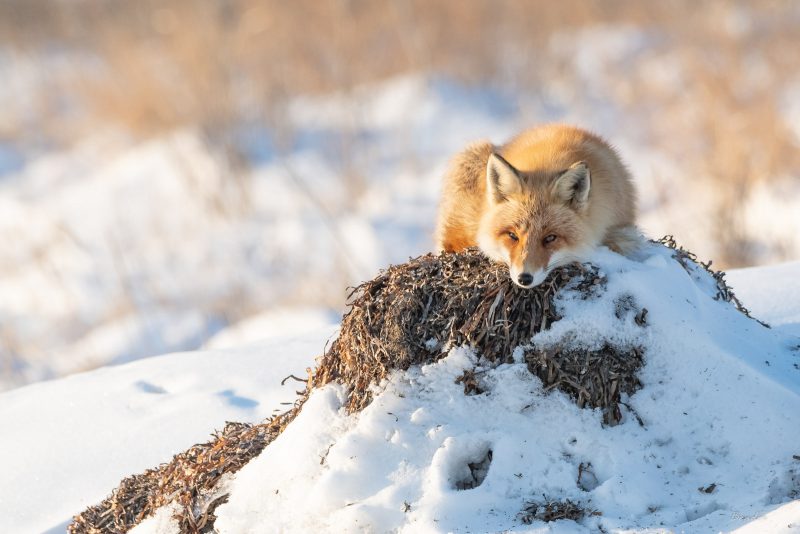 Unfortunately, there has been some habituation of foxes to visitors, who provide handouts in order to take pictures of the animals. It is essential that visitors do not feed the wildlife, and particularly the foxes. The practice has led to an increase in fox fatalities as they wander into more populated areas with greater numbers of vehicles passing on motorways.

The foxes in Hokkaido also carry echinococcosis, a parasitic disease that can be transmitted to humans.

No winter trip to Japan would be complete with a visit to the Nagano Prefecture. By taking the Shinkansen (the ‘bullet train’) from Toyko, the city of Nagano can be reached in under two hours. From Nagano, catch a bus or train into the town of Yamanouchi.

On the outskirts of this town lies Joshin’etsukogen National Park, where you will have the best chance of seeing the Japanese serow during the winter. It is also where the famous snow monkeys can be found.

While Japanese macaques can be found throughout the island of Honshu, the easiest viewing area is in Jigokudani Yaen-koen. A special place on the edge of the national park, Jigokudani Yaen-koen is where a series of hot springs (called onsens) have been built in the Yokoyu River valley since 1964, in order to lessen the human-monkey conflicts.

Prior to this, there were frequent conflicts resulting from the monkeys attempting to use the same onsens that people were using, in order to regulate their body temperature during the winter. This is a health and hygiene issue on many levels for both species, and efforts were made to separate the two. 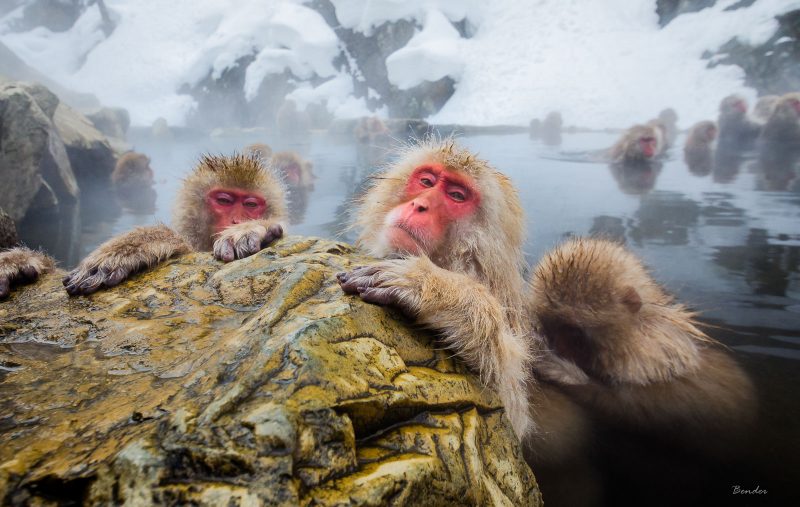 The park now serves a dual purpose – as a prime location for photographers to capture these expressive and entertaining creatures, and to protect the national park boundaries and its inhabitants.

Be aware that, while there are many transportation options to get close to the park, there is a hike of about 2km to get to where the monkey-specific onsens are located. This trail can be icy and/or muddy in the winter, so be sure to dress appropriately and have footwear with winter-traction soles.

The monkeys live in these mountains year-round, and can be observed with new babies during spring visits. Bear in mind that as the days grow warmer, they visit the pools less frequently, as they do not need the warmth to survive. Autumn visits can also be rewarding when you find the troops among the brightly coloured foliage.

While I have only covered some of the major species found in Japan, the country is home to over 90,000 species, and a wide array of endemic species found nowhere else in the world. The beauty that wintertime brings to Japan only elevates the potential of the images that can be created here, while the weather brings rarely seen species within easy photographic reach.

So, when contemplating the destination of your next wildlife photography adventure, turn your gaze to the land of the rising sun, and head north.