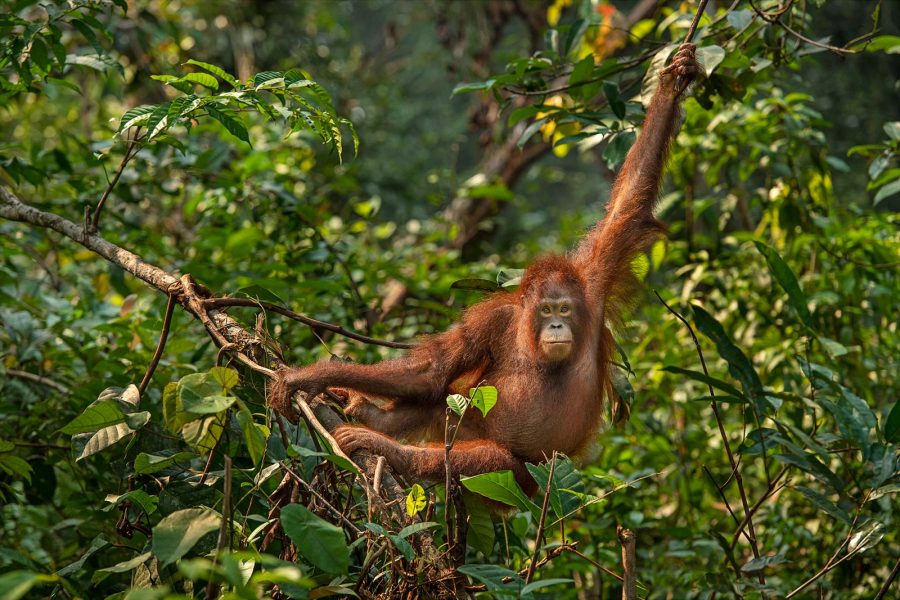 Home » Featured » Saving a Species One Portrait at a Time

My continuing series of “Eyes are the Window to the Soul” portraits of orangutans came about in an unlikely place – Indianapolis, Indiana.

While on a general travel assignment there, in the heart of the United States in May 2014, the dates fortuitously coincided with the opening of the state-of-the-art Simon Skjodt International Orangutan Center.

The birth of a series

Upon visiting, I immediately became enamoured by the occupants on the other side of the glass.

At the Center, I soon realised that when you look into the eyes of an orangutan, there’s no doubt that a highly intelligent sentient being is looking back.

That shouldn’t have been a surprise since we share 96.4% of the same DNA with these fellow great apes (humans, orangutans, gorillas, chimpanzees, and bonobos fall into this classification).

So, I set about capturing images. I wanted to convey this sense of commonality between species but needed to avoid the reflections from the glass partition between us, as well as eliminate the distracting background.

On this initial attempt, I held my Nikon Speedlight off-camera at its highest power setting to illuminate the orangutans as they peered back at me. At the same time, this dropped the ambient light behind them.

The resulting images were met with success and became part of my travel story on Indianapolis (which also included the historic Indianapolis Motor Speedway).

More importantly, they were the seeds of what has evolved into an award-winning book, “The People of the Forest”, and exhibitions around the globe.

The title comes from the derivation of “orangutan” from the Malay and Indonesian words orang (people) and hutan (forest).

I returned to Indianapolis with battery-operated Profoto strobes and permission to access off-limit areas of the enclosure.

With this added power, I had faster recycle times and could easily overpower the ambient light situations to get the background down to black. My goal was to make the images look like they were done in a studio.

The series has expanded to other facilities, including the Center for Great Apes in Florida, the Singapore Zoo, and the Tama Zoo in Japan.

The Center for Great Apes is doing an incredible job with many of their rescues coming from horrible conditions. Mostly as pets in private homes or entertainers at roadside circuses where they spend the majority of their lives in tiny cages.

The orangutans at the Center can interact with other orangutans in large enclosures. They can also find solitude when they choose, something that is the norm for adult males in the wild.

Awards and publication of my series soon came to the attention of the Borneo Orangutan Survival Foundation (BOSF), and I was invited to their facilities in Borneo to continue my portrait series.

I used my Stella lights as strobes were not allowed and a black backdrop. I also documented the amazing work the foundation is doing, reintroducing captured and wounded orangutans back into the wild.

While on both the Indonesian and Malaysian sides of Borneo, I photographed orangutans living in the forest. These images set the stage for the portraits in “The People of the Forest” by giving a bigger picture of the current state of orangutan populations.

Both the portraits and reportage photos in the book are supported by text I requested from primatologists and other leading experts.

Among them is Dr Rob Shumaker of the International Orangutan Center in Indianapolis. He is conducting cognitive research studies and observing an incredible range of complex behaviours, including gift-giving.

Orangutans use “calculated reciprocity”, which involves weighing the costs and benefits of gift exchanges and keeping track of these over time.

Orangutans are the first non-human species documented to do so. Dr Shumaker’s studies also demonstrate that orangutans have a photographic memory.

Orangutans in the wild

Unlike their great ape cousins, orangutans are only found in the wild in Borneo and Sumatra. While the future for many species is uncertain, orangutans are hanging on by a particularly thin thread.

Their native habitats are in danger due to human incursions, most often in the form of palm oil plantations.

The lucrative and easy-to-produce oil is not only one of the most efficient sources of vegetable oil but is also used in an almost endless list of products, from chocolates to cosmetics. Herein lies the problem.

The rapid expansion of palm oil plantations threatens some of the planet’s most sensitive habitats, and at the same time is economically vital for the people of Borneo and Sumatra.

The best situation is for its production to be done sustainably without destroying forests. It’s a delicate balance that must be attained. If things continue on the same path, orangutans will become the first great ape species to become extinct in the wild.

NGOs such as the Borneo Orangutan Survival Foundation are at the forefront of the battle, rescuing orangutans that have fallen victim to poaching, injury, or have been orphaned due to palm oil plantations.

The Indonesian NGO also replants vast areas of the Bornean Forest that had fallen victim to fires or plantations.

These techniques are being taught to orphaned orangutans at the Forest School at the BOSF facility in Kalimantan by their surrogate human “mothers”.

The goal is for them to graduate and eventually be introduced into the wild after spending time on a relocation island where their rewilding progress can be monitored.

Another of the orangutan’s skills is the construction of sleeping nests made from multiple layers of branches and foliage.

These techniques are traditionally passed down through the generations, as young orangutans observe their mother’s nest-building behaviour.

Initially, a suitable tree is located, one with branches that they calculate can maintain their weight, and then branches are pulled together and joined at a point.

After a foundation is built, orangutans bend smaller, leafy branches braiding branch tips onto the foundation to create a “mattress”. In addition, orangutans may add pillows, blankets, roofs, and bunkbeds to their nests.

Hopefully my book and exhibition “The People of the Forest” create further awareness of orangutans and emphasise that the forests of Borneo and Sumatra are vital to their survival.

Orangutans are the only primarily arboreal great ape, as well as the largest tree-living mammal in the world. If BOSF, other NGOs, and the government don’t succeed in protecting the forest, the future is certain and bleak.

As Dr Terry Maple says: “Making an orangutan live on the ground is the same as making a St. Bernard live up in a tree.”