How to Photograph Water Voles in the UK 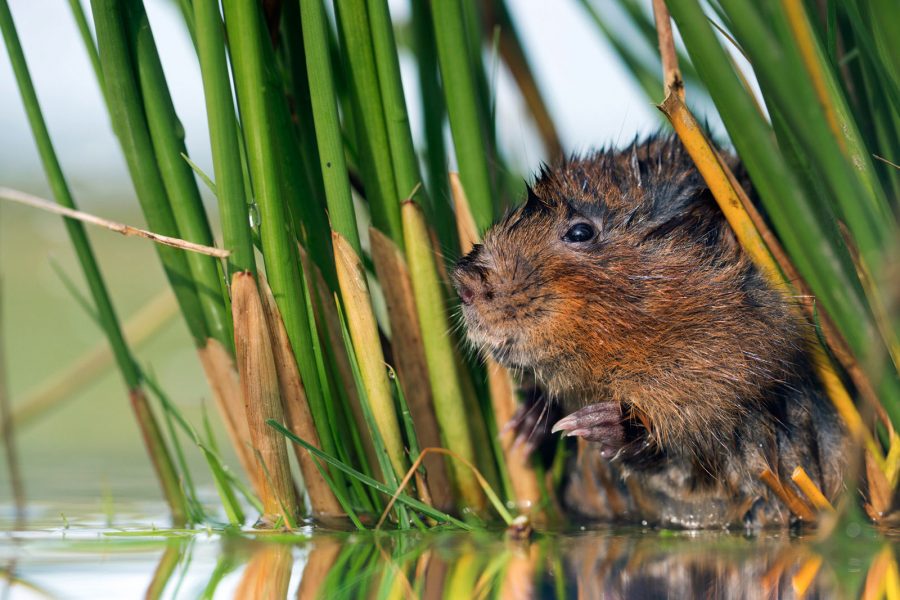 The water vole is a charismatic, charming small mammal which appeals to a disproportionately wide range of people, so for a wildlife photographer it is a valuable subject to become acquainted with.

I must say that I have always found it to be an obliging subject, so the problem isn’t so much getting a photograph of one but finding one to get a photograph of!

The water vole was once a familiar creature on the waterways of Britain. Immortalised as ‘Ratty’ by Kenneth Grahame in his story The Wind in the Willows more than one hundred years ago, the water vole is looked upon as a harmless, lovable creature.

In his day, water voles were common and widespread. But over the last few decades they have suffered the worst decline of any British mammal in recent history. Their population has crashed by about 90% and their range reduced by a staggering 96%.

The reason for their decline is multi-faceted, but the main reasons are habitat loss (or poor habitat management) and the introduction of the non-native mink. The majority of water voles in the UK are associated with slow-moving waterways such as ditches, canals and slow rivers. Unfortunately, we show little regard for wildlife when managing these habitats: often using steel reinforcements for canals, digging out excessive lengths of ditches in one go, and straightening rivers to make them flow faster.

Poor habitat management would explain a steady loss in numbers, but massive losses have been caused by the release of mink from fur farms. Animal rights activists argued that farming mink for their fur was immoral and that they were kept in poor conditions and, whilst this might be correct, what happened next was a huge mistake.

One of the actions taken by some of these groups was to break into mink farms and release the animals into the wild and this had disastrous consequences. Mink are quite small and, unlike our natural predators such as the otter, they are able to get into the burrows of water voles. The water voles have no defence against this non-native predator and their population has been decimated.

When I started out as a wildlife photographer in West Cornwall, I think the nearest population of wild water voles was more than two hundred miles away and – though I had seen water voles in the wild – my first real photographic experiences came from visiting a water vole breeding farm in Devon.

Here I photographed captive water voles, so I could use the photos to illustrate my articles about their plight.

The Westcountry Wildlife Photography Centre, owned by Derek Gow, was established as a breeding centre for water voles. Derek has a passion for reintroducing wildlife which we have lost from the UK.

Since opening this centre, he has gone on to breed a wider range of species, including beavers, for reintroductions and has been operating as a photographic location for photographers and film-makers to capture footage of a wide range of British mammals.

His facility is understandably popular with professionals as well as camera clubs and keen amateurs. I have no problem with photographing animals in captivity so long as the animals are well-cared for and the photographer doesn’t claim the subjects were wild and free.

I am also very happy to promote a place such as this which has done an amazing amount to reintroduce water voles and beavers into the British countryside.

The process of reintroducing animals offers the wildlife photographer another method and reason to take photos of the subject. Such reintroductions of water voles are now taking place in many counties, where mink have been removed or declined, and they tend to generate a great deal of public interest.

With this interest comes the need for press releases and photography. When water voles were reintroduced into Cornwall I joined the Environment Agency and the Westland Countryside Stewards to document one of the release days. This gave me the ammunition for a magazine article and the opportunity to get some shots for future sales.

Most voles are returned to the wild using a method called ‘soft-release’. This involves transferring the water voles, often in pairs, into a captive enclosure at their new location.

Here they are fed for a few days before the pen is opened. The water voles are then allowed to come and go as they please but food is still provided.

After a few more days, when the voles have stopped visiting, the food supply is stopped. The pen is taken away and the release is complete. This is quite a difficult process to photograph, but thankfully there are usually a few larger individuals released in a more direct way.

A hard-release is where the animal is simply released into their new environment, and this provides the opportunity to capture a shot of an animal at the point of release.

How to find wild water voles

As wildlife photographers, we all want the challenge of capturing images of animals in the wild. With water voles the biggest challenge is to find a population of water voles in a suitable and convenient place. To do this we first need to be able to read their tracks and signs.

Some water voles will live a long way from water. I know a population which lives perfectly happily on a mountainside in Scotland, and in Europe they live well away from water in gardens, woodland and in farmland.

But, in the UK, the majority of water voles make their homes by burrowing into the banks of canals, rivers and ditches. They like well-vegetated banks and will dig out their burrows at varying heights above water level.

Look closely around their holes and you will see that the vegetation is nibbled quite short, because water voles are vegetarians. Where they nibble the more substantial stems of grass, reed or rush, you should notice that they cut them off in a straight line – usually at a 45° angle.

Water voles make latrines where they regularly defecate. Their droppings tend to be cylindrical with blunt ends, so we can see the spots that they visit regularly.

Finally, if you are in suitable water vole territory, listen for the sound of one plopping into the water. This is quite distinctive, but do be aware that it could be a noisy moorhen or coot.

Next we need to be able to identify a water vole when we see one! With experience this is quite straightforward, but at first it is easy to confuse a water vole with a brown rat. These two animals are quite similar in size and colour, but the water vole has a much rounder face, plumper appearance, less obvious ears, smaller eyes, and a blunter nose.

At the other end, the tail of a water vole is much shorter than that of a rat. However, more significantly, it isn’t as noticeable because it is covered in fur and usually held in a less obtrusive position.

So you’ve found a site and identified a water vole. Now the good news is that they are active throughout the year; the bad news is you might get wet – so I recommend buying some chest-waders.

In my experience, the best shots of water voles are taken from near water level – but getting the camera down to this position might mean sitting in the water. But before you get your kit on and park yourself in a ditch, you would be well-advised to put in some hours for watching and learning.

Water voles are creatures of habit. They like certain spots at certain times of day. They are more active at dawn and dusk than in the middle of the day, so get out with a pair of binoculars and spend time getting to know your subject.

Watch what they do and when they do it. Assess the angle of light, and figure out the best places to sit and watch with your camera.

Water voles can be quite confiding so there is no need for a hide. So long as you dress in camouflaged colours and remain perfectly still they should not be alarmed, the key is to get in position and be prepared for a wait.

It is sometimes possible to attract water voles using food such as pieces of apple, though I tend not to do this as it isn’t necessary and I don’t think it enhances the photo to have a chunk of apple in the frame.

My lens of choice is the 300mm f/2.8, which is great for low-light dusk and dawn photography, and I keep an old tripod specifically for use in water because it will need to be partly submerged in the water and mud.

It’s a good idea to use an alloy tripod for this purpose rather than carbon fibre, because carbon fibre will expand when it gets wet which causes joints to split.

I also use a gimbal head because this is the safest way to hold a telephoto lens close to water.

It’s worth thinking about protection for yourself as well as the camera. From the waist down you should be safe enough in chest waders, but from the chest up I recommend an insect repellent. By sharing the watery habitat with water voles, you will find a wide range of insect life intent on preventing you from capturing that perfect image!

We have a lot to thank Kenneth Grahame for. Without him there wouldn’t be the same level of interest in water voles that there is now, and there is a chance that this endearing small mammal might be close to extinction in the UK.

His writing over a century ago has inspired many of us directly or indirectly to take an interest in this creature and to appreciate its charm. He has given us a bigger marketplace for our photography, so the least we can do is to promote the water vole and raise awareness of its plight.

Get out there, photograph it, and tell everyone how wonderful the water vole is.