How to Photograph Orchids 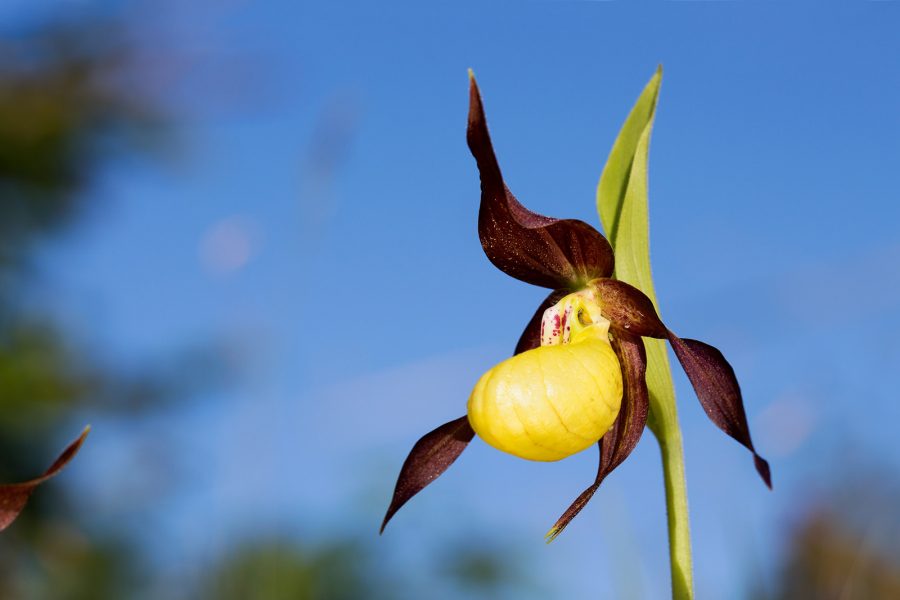 Of all the flower families found across the world, there are none as highly prized as orchids. The flowers of orchids can be glorious in colour, intricate in shape and often feature amazing adaptations, making them a fascinating subject for botanists and photographers alike.

In the UK, we have more than fifty species of orchids – as well as many hybrids – and summer is the season for getting to grips with identifying and photographing them. Here are a few ideas for finding and photographing orchids. But be warned, if you get interested you might get hooked and life may never be the same again!

What is an orchid?

There are many plants which have colourful and ornate flowers occurring in spikes, but not all of them are orchids. Here are a few pointers to help distinguish a wild orchid in the UK.

Orchids are monocotyledons, so their leaves are relatively long and narrow showing parallel veining, often a bit like the leaf of a tulip. Their flowers are carried in a spike; each flower is symmetrical and is comprised of petals and sepals, but the lowest petal (referred to as the lip or labellum) is usually larger, more prominent and far more complex than the others. In some species, the lip also has a long thin spur behind it.

Within each flower there are two pollen-bearing structures which are sticky and aim to attach to the back of pollinating insects.

Rather annoyingly, not all orchids have ‘orchid’ in their title. Consequently, helleborines, twayblades and lady’s-tresses are all types of orchid.

Where should you look to find orchids?

Orchids are found in a variety of habitats including wildflower meadows, along the coastal fringe, in woodlands, heathland, marshes and dunes. They tend to be more common and more diverse on limestone and chalk (calcareous ground), so The South Downs, North Downs, Dorset, Hampshire, Wiltshire and parts of North Yorkshire and Cumbria are very good for them. There are also a few species which specialise on more acidic soils.

Probably the best starting point in your quest for orchids is to research your county’s Wildlife Trust nature reserves. This should help you to find a good orchid spot in your local area.

What orchids can you find in the UK?

There are some orchids which are so rare that we must visit specific locations, of which there might only be one or two in the UK, but there are many that we might stumble across fortuitously on roadside verges or in wildflower meadows. Here are a few of those, listed through the year:

Early Purple Orchid: in woodland and roadside verges from mid-April to early May.

Common Twayblade: in a wide variety of habitats, most commonly on calcareous ground, in May and June.

Bee Orchid: on calcareous ground including roadside verges and dunes, in June.

Heath Spotted Orchid: on more acidic soil such as heath and moorland in June and July.

Pyramidal Orchid: on calcareous ground including suitable dunes, in July.

Best locations for orchids in the UK

Once you get bitten by the orchid bug, you might want to explore further afield. So here are a few highly recommended orchid spots around the UK along with some of the key species which might be found there:

The coast of Dorset between Swanage and Lulworth Cove has thousands of early spider orchids in late April.

Clarke’s Pool Meadow – Gloucestershire Wildlife Trust – is great for Green-winged Orchids (estimated 45,000 of them!), best in early May.

Gait Barrows National Nature Reserve on the border of Lancashire and Cumbria is the only place where we can visit to see Lady’s Slipper Orchids in early June.

Box Hill, a National Trust estate in Surrey, is fantastic for many varieties of orchids from mid-May through to July.  In late May a couple of years ago I enjoyed finding Man and Bird’s Nest Orchids here.

Waitby Greenriggs, Cumbria Wildlife Trust, is one of my personal favourites for the number of different species in a small reserve, on the 13th of June a couple of years ago I saw seven species of orchid: Lesser Butterfly; Fragrant; Common Twayblade; Marsh Helleborine (just coming through); Fly; Northern Marsh; Common Spotted and many hybrids of Northern Marsh and Common Spotted.

There are many nature reserves in the area around Wiltshire and north Hampshire. Last year I visited the beautiful Coombe Bissett Down (Wiltshire Wildlife Trust) and found plenty of Fragrant and Common Spotted Orchids, as well as a few Burnt Orchids (the county flower of Wiltshire).

Before we start to photograph an orchid, it is important that we know its main identification features and so prior research is important. On many occasions I have found myself adjusting my angle of view slightly in order to show the spur on the back of the flower’s lip, for example. Knowing the identification features also enables me to focus on the appropriate part of the flower.

If in doubt, I recommend taking a variety of photos some showing the flowers close-up, others showing the habitat, and certainly try to get some with the leaves in frame (though I appreciate this can be difficult for a tall flower spike growing amongst tangled grasses).

When focusing on a flower spike with a macro or telephoto lens, not all of the surrounding flowers will be in focus. Picking out the most appropriate flower on which to focus can be quite difficult, but it is important. That’s not just for identifying the specimen, but also aesthetically.

I try to choose one that is in good condition and place it in an appropriate position in the photo, usually off-centre and maybe on the thirds, but this will depend on the balance of flower and space within the frame.

The number of other flowers in focus and the state of the background will partly be determined by our choice of aperture. I tend to use an aperture of between f/5.6 and f/8, but remember that the closer you get the less depth of field you have – so if I get really close with a macro lens, then I might use f/11.

3. Working with the wind

The aperture will, in part, be determined by the state of the weather. I always use a tripod for orchid photography and like to keep the ISO to 100 or 200, but if the wind gets up a fast shutter speed is required and this means using a wide aperture.

Ideally I would only take flower photos on calm days, but inevitably the British weather has other plans.

In wind, I try to shelter the plant using my body, my camera bag, and even reflectors. In my kit bag I carry a stout piece of wire and a bread bag tag to anchor the stem of the flower, but this is only useful for close-up flower shots.

Cloudy days are good for close-ups of flowers, but still I will usually put a reflector beneath the flower spike to cast light underneath the flowers. I tend to prefer gold reflectors but sometimes use white. If it’s a sunny day, then it’s best to visit early or late in the day when the sun is lower and light warmer, this is also when it is possible to experiment with backlit flowers.

One essential piece of gear is a tripod which gets down to ground level. I like to use a ball head because it gives extra flexibility for fine adjustments to position, especially when combined with a lens mounted system.

Rotating lens mounts are most commonly associated with telephoto lenses, but it is also possible to mount some macro lenses (such as my favoured Canon 100mm macro lens) in this way. Not only does a lens mount allow the camera to turn easily between landscape and portrait format, but it also allows the camera to be positioned at some rather odd angles on a tripod and still be straightened up horizontally.

One alternative to using a tripod is to use a beanbag on the ground. This method is a lot easier and can save time, but there will be occasions when a tripod is required. Either way, to keep my camera still I use a remote release and focus manually using Live View in magnify mode.

I use three lenses above all others: the 16-35mm for flowers in the landscape, the 100mm macro for close-up shots, and the 300mm f2.8 for getting that great out of focus background in shots of the whole orchid plant.

Generally, I begin my photography with the 100mm macro lens and take a mixture of photos to show the key features of the subject, then I move on to other lenses to try to be more creative.

My favourite lens for orchids is the 300mm. Orchids, by their nature, tend to be tall and thin so a low angle combined with a telephoto lens gets most of the orchid spike sharp, and can throw the background totally out of focus.

It’s also possible to get a lot of vegetation between the camera and the subject with a 300mm lens and this can create lovely foreground blur to compliment the background blur.

Another benefit to using a 300mm, as opposed to a 100mm lens, is the ability to control the amount of background in frame.

The 300mm lens has a much narrower field of view. Many times I have been using a 100mm macro lens and found, when working from ground level, that I couldn’t avoid getting a distracting bit of sky in the photo. This problem was solved by switching to a 300mm lens and moving three times further from the subject. This achieves the same subject size in the frame but a much tighter background.

Finally, the 300mm lens is much better for taking backlit photos than the 100mm lens. This is partly due to the depth of the lens hood, but also to the narrower field of view which allows less extraneous light into the lens.

If photographing a single flower spike, put it off-centre and have the key part of it facing into the space:

Try to find other orchid spikes which can be used out of focus in the background to help fill the negative space:

If you need a small aperture to get enough of the orchid sharp, but want to avoid a messy background, get down really low and shoot against the sky. For this technique you will probably need to use a reflector:

Try to frame your orchid with background shapes or patterns to frame and/or compliment it:

Orchids are addictive. A few years ago I had no more than a passing interest in them, but as I have found more and more species on my travels I have started to seek them out. Nowadays, I am afraid I would have to classify myself as a bit of an orchid-twitcher, often planning holidays around their flowering season and location.

With only about thirty species in my image library I must have at least another twenty to find – but best not tell my wife that, she thinks our holidays are planned around National Trust properties, good walks and cafes!

Identifying orchids is a challenge, so I recommend reading Britain’s Orchids (WILDGuides) by David Lang.