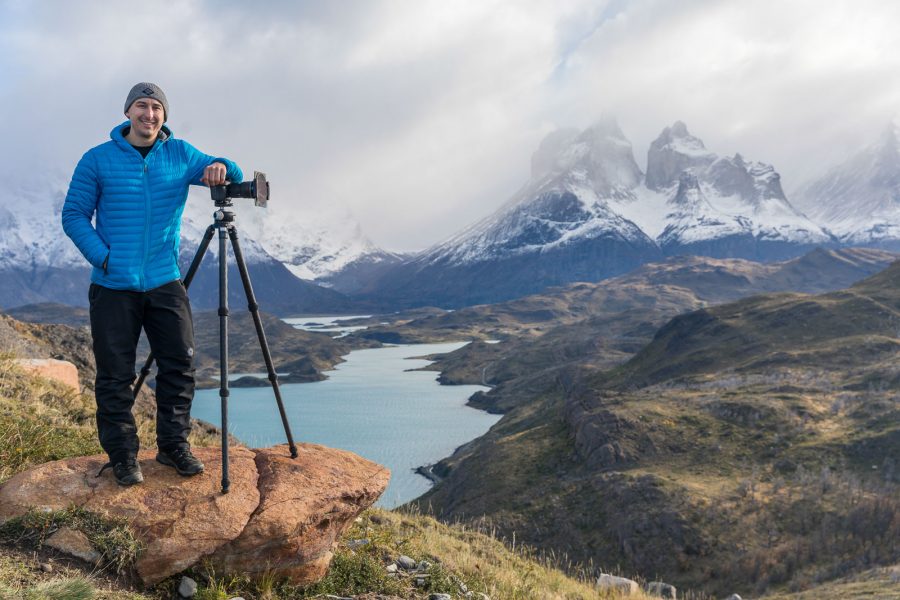 Mike Mezeul II is a travel and landscape photographer based out of Dallas, Texas. He currently spends his days traveling to various countries around the world in hopes of “documenting the true beauty of this world”. From night skies, sunsets and sunrises, and severe weather, Mike has amassed a portfolio of work that has been published across the world.

Whether it’s chasing down a tornado, hiking to the vent of a volcano, or battling freezing temperatures above the Arctic Circle to document the aurora borealis, he is determined to do whatever it takes to capture the shot. During his travels, Mike also leads several workshops a year teaching participants how to capture the best photographs possible.

I actually had the nature bug before I had the photography! Actually, to be specific, it was more the sky bug than anything. Ever since I was a little kid, I have been absolutely fascinated by the sky.

I was that awkward child who would lay on the picnic table at recess and watch the clouds go by, instead of playing with the other kids. I was mesmerised by the clouds. How they built up, changed shapes, how some brought thunder and lightning while others provided colourful sunsets and sunrises.

Even though I was amazed, I was scared of the big thunderstorms. Eventually that fear turned into curiosity, and I started learning about severe weather. For my 15th birthday, I got my first camera – a Yashica MG-1 – and immediately pointed it skyward. Ever since that day, the sky has always been my favourite subject to see through the lens.

Oh, wow. Well, this is my first ever lightning photograph. I was so stoked when I got the film back and saw this super shaky, slightly out-of-focus frame!

I remember standing underneath the awning of my parents’ front porch, with no idea how to even photograph lightning, and waiting patiently for a flash. I wasn’t even shooting long exposures – that’s how little I knew! I was holding the camera in my hands as steadily as possible, and when I would see the lightning I would press the shutter. 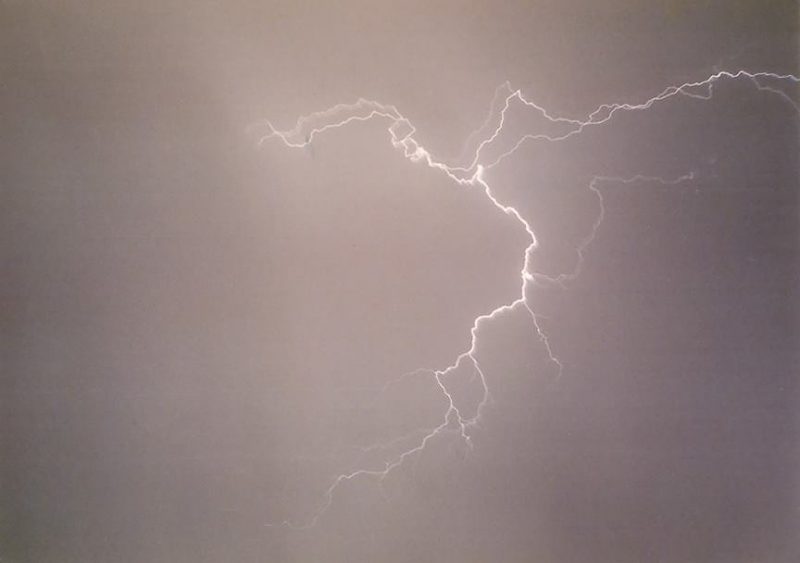 I must have gone through at least four or five rolls of film before I thought I may have something. This “fantastic, award-winning image” now hangs framed next to my desk with the negative below it. As much as I poke fun at the shot, I love it. It’s a constant reminder to me of where I started, my love for photography, and how no matter where my career takes me, I’ve come so far and I will never stop growing. 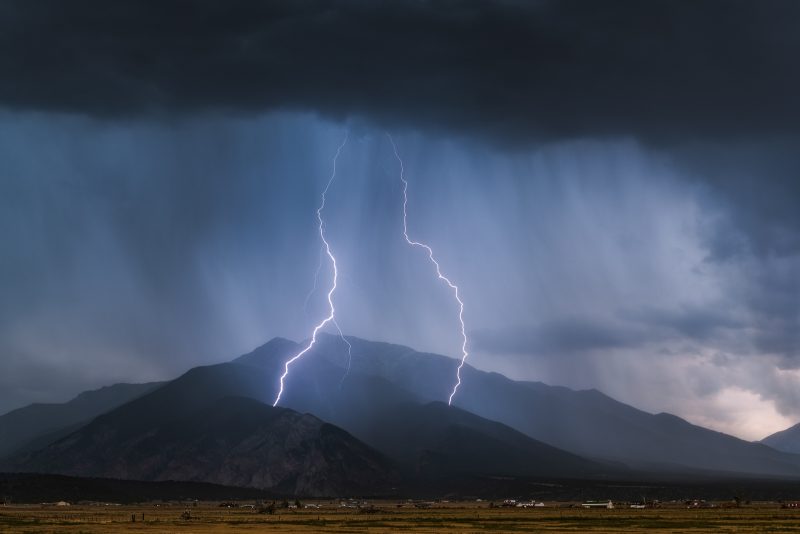 Show us two of your favourite photos – one from your amateur days, and one from your professional career. Tell us why they are your favourites and what made you so proud of them at the time. How do you feel about the older image now more time has passed?

When severe weather isn’t a possibility, my second favourite sky subject to photography is the night sky. I love to escape the city lights and see that brilliant, twinkling show above our heads.

I started learning how to photograph the night sky back in 2009, and this image is one of my first attempts at shooting the Milky Way with a foreground subject. I finally had a DSLR that was good enough to shoot at ISOs higher than 400, so I was excited to see what the results would be.

It took several attempts at getting the focus decent and the light painting proper, but when I created this frame I couldn’t have been more happy. Night sky images weren’t too popular on social, so I was really anxious to share it with others as well. To this day, I still enjoy this image because of what I mentioned earlier: it’s where I started, and I remember the joy with seeing that frame pop up on my LCD. 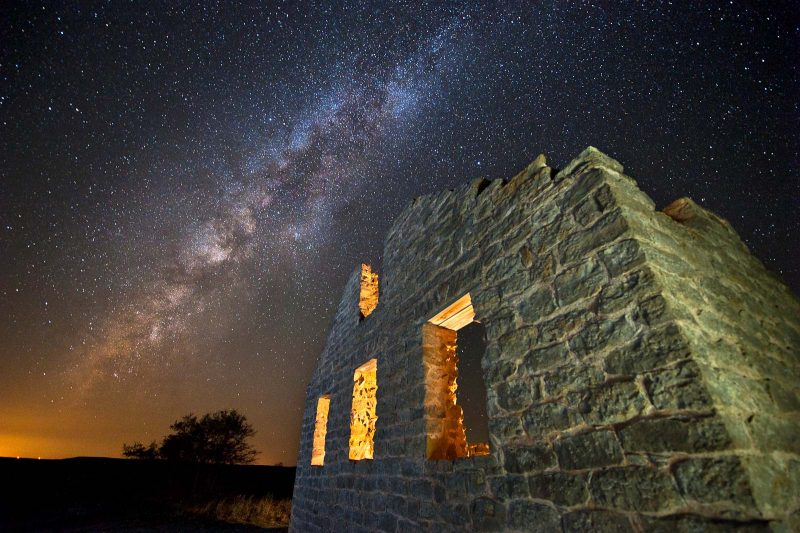 The second image is from late 2016, when I hiked the Kilauea Volcano in Hawaii as it was erupting. I went up there with one goal and one goal only: to capture an image of the lava with a brilliant sunset behind it.

Well, nature had different plans. After a 6.5 mile hike out to the lava flow, I was treated to absolutely no clouds in the sky. Knowing that as amazing as the lava was, an empty sky would really bring down the interest in the frame. I almost packed up my gear and trekked back, but then I had an “ah ha” moment. The sky was empty, so that means the stars will be out. I waited for twilight to fade and was greeted with a fantastic, star-filled night sky.

Read more: How to Photograph Volcanos 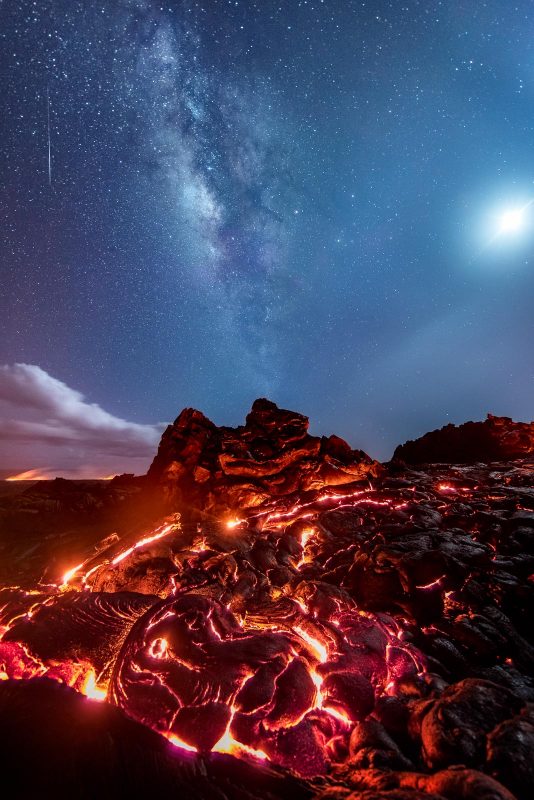 I found an area of where the lava was cooling and crusting and, in one shot, was able to create this photo. I was also lucky enough to have an Iridium Flare come through the frame, and also Mars and Venus in the sky as well. This is one of my favourite night sky images from my professional career not only because of the moment, but because of the work put into getting out to the lava and how it was a bucket list moment in my life.

When I compare the two images, of course my compositional and technical skills have improved since 2009 (I hope!) – but I still enjoy the older image. I may need to revisit it sometime for some better processing, though. 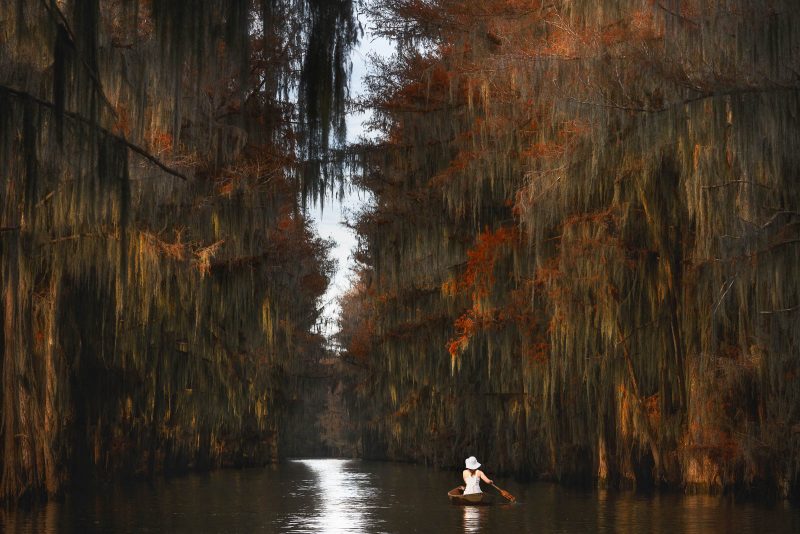 When did you decide you wanted to become a professional photographer?

It was actually never a goal of mine; I kind of fell into it. I have an undergraduate degree in Criminal Justice, a Masters degree in Strategic Communications, and have never taken a photography class in my life. But, back in 2010, I was working as a producer for a commercial company – and got fired (I was two minutes late, oops), but it was the best thing that could have happened to me. 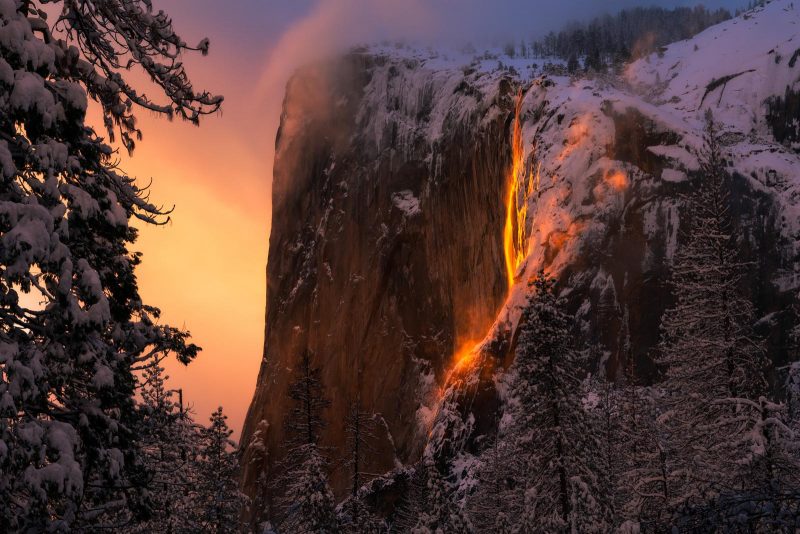 I decided to try to do photography a bit more intensely to try and make some cash, and one door opened after another. Before I knew it, I was being hired all around Texas for assignments and that all snowballed from there.

How did you transition into this and how long did it take?

It took about three solid years before I thought to myself that I could really make something out of photography in terms of a career.

Read more: Breaking Into Business – How to Make Money from Your Photos 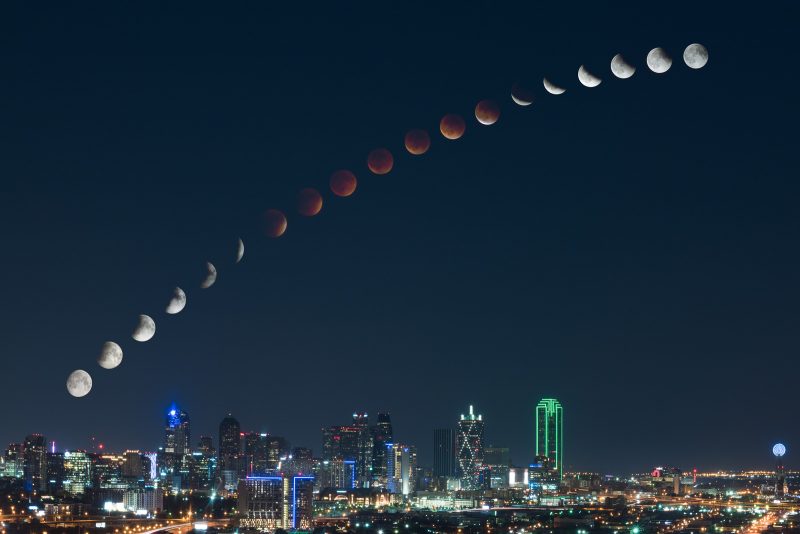 There were many, many times that I questioned my choice and wondered how in the heck I was going to make it. I still have those moments to be honest. It’s an incredibly competitive industry and you really have to grind to make it, but I wouldn’t trade it for the world.

I think back in 2016 when I had a few images go viral, and then in 2017 as well when one ended up having over 600,000 shares on Facebook alone. Those moments really encouraged me that people may enjoy my work. I also started receiving more inquiries to teach and to do assignment work. 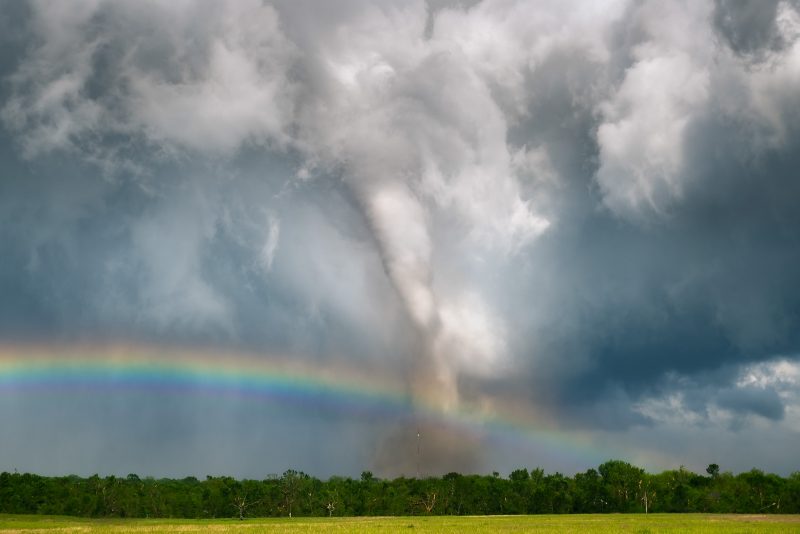 So those were a couple of moments that definitely changed my career. Back in 2018, I was invited by Nikon to speak on their stage at CES about my work, and that was a huge moment as well. I’ve been invited back several times since and that has only allowed more of my work to be seen and for me to share my passion.

Death Valley National Park has been a place I’ve visited well over a dozen times since 2014, and it’s definitely made me see the landscape there differently each time.

The first time I went there, I can recall just how overwhelming the area was. I mean, it’s huge – and there’s so much there to create a frame with. My first trip there, looking back through the images, I definitely found myself focusing on the bigger picture… the easy subjects per se. 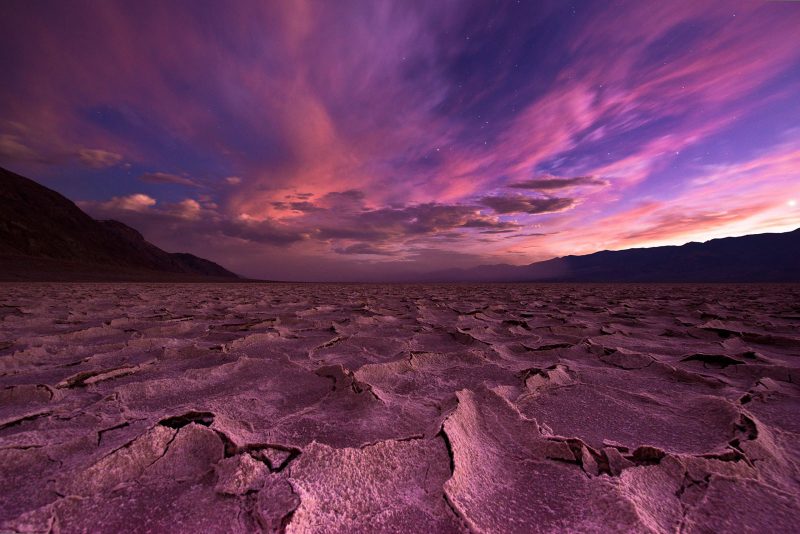 I didn’t think about all the little details I was walking right by that told a story of just how desolate and unique of a landscape this was. Sure, the big picture is wonderful and the mountains are something else, but those little details… well, they go a long way.

Travelling back this past February, I made sure my students (and myself) captured some noteworthy frames of those intricate, tiny scenes I never even considered on my first trip. Death Valley is full of wonderful unique shapes and patterns, and when you give them some love they bring so much life to your composition. 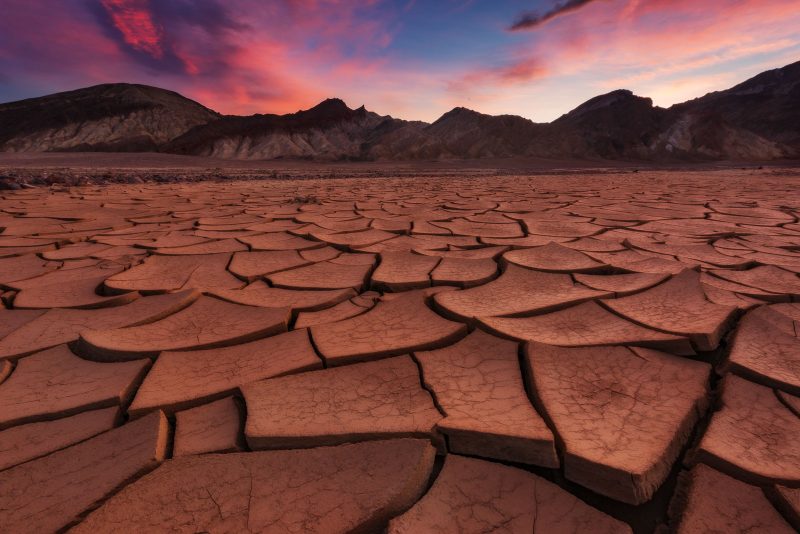 Travel as much as you can before 2020. For real though, I’d just remind myself to be patient. I am, overall, pretty good with waiting forever to capture an image, but there have been some moments where my patience has gotten the best of me and I missed something amazing.

You have to go where the images are, and sometimes that requires a lot of perseverance and patience. 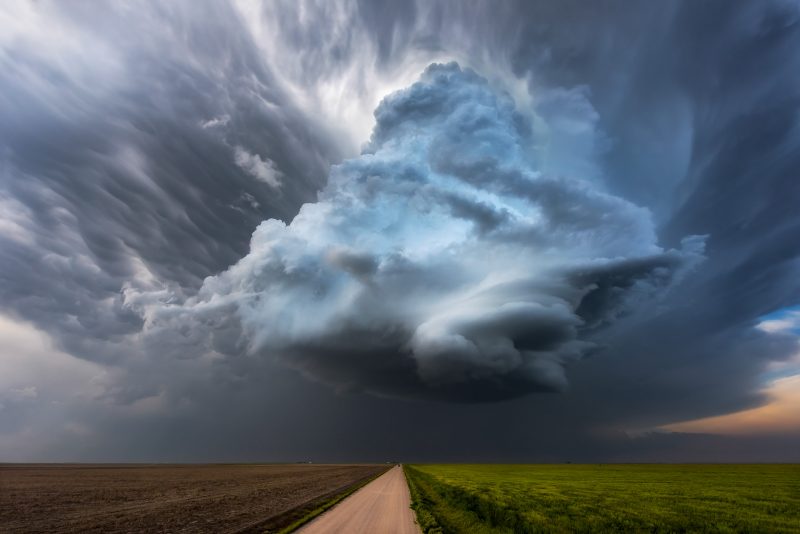 What was the best mistake you ever made?

I think learning photography was the best mistake I ever made. I never intended to get into photography as a hobby, yet alone a career. I learned photography on that old Yashica MG-1 to show my dad that I could use his camera better than he could.

It was more of a competition thing than anything. Little did I know it would lead to some of the best memories and moments of my life.

You can visit Mezeul’s website to see more of his work. For more from this series, subscribe to our free Nature TTL newsletter.