How to Photograph the International Space Station 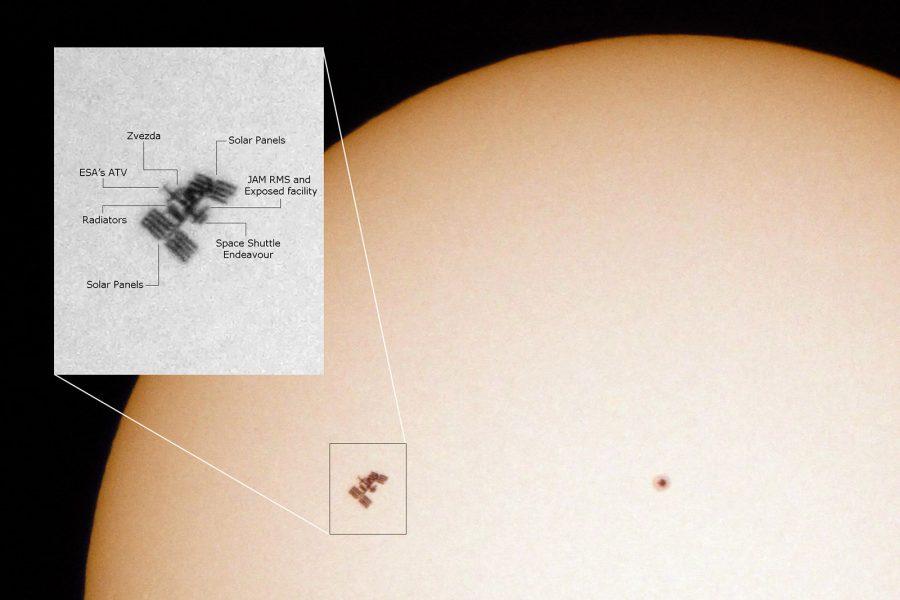 For over 20 years, humans have established a continuous presence in space onboard the International Space Station (ISS). The ISS is a space laboratory about the size of a football field (living quarters are far smaller – this is the size with solar panels and radiators deployed), orbiting the Earth at a distance between 330km and 410km. I’m still astonished by the fact that such a large object rotates around the Earth at 28,000km per hour. If you want to photograph the International Space Station, you have two ways of approaching it.

First, you have the wide field approach where you photograph the ISS passing through different constellations above a landscape. The other type of ISS photography employs long focal lengths to photograph the International Space Station transiting the Sun or the Moon. 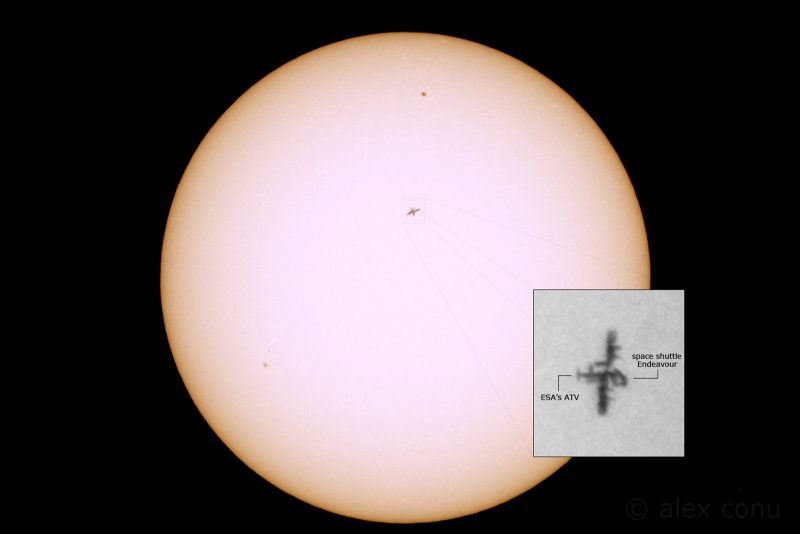 You don’t need a lot of gear for this. One camera with a wide-angle lens, a tripod, and a cable release is enough.

The ISS is usually pretty bright in the sky and can be photographed even from heavily light polluted cities. If you’re not familiar with the aspect of the station when it crosses the sky above you, simply put it looks like a bright “star” moving relatively slow. It takes the ISS a few minutes to move across the visible sky.

How to know when and where to see the ISS

Probably the most famous website for this is Heavens Above. Another option is Spot the Station, although it’s a bit more basic. There’s also a plethora of smartphone apps that will alert you when the ISS is visible in the sky at your given location.

I’ve been using Heavens Above since it was founded, and it’s my website of choice when I want to take wide field photos of the ISS. You can open an account, set your location, and the website will generate a table with future passings of the International Space Station. Besides the ISS, you can also find passes of the Hubble Space Telescope or other bright satellites.

I generated a table of passes for a random place on Earth between March 13 and 23, 2021. Here’s the result: 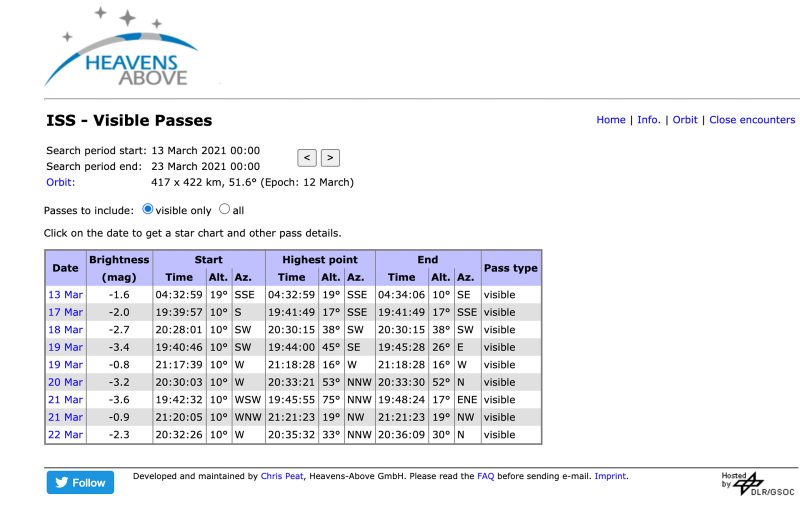 The second column might be the most unfamiliar for a novice observer. That’s the maximum magnitude (maximum brightness) of the ISS for that specific pass. We use the magnitude scale to appreciate the brightness of any celestial body visible in the sky. The brighter the object, the lower the value of its magnitude.

We also have to know that the magnitude scale is not linear. A 2nd magnitude star is 2.512 times brighter than a 3rd magnitude one. The Sun has a magnitude of -26.7, while some of the objects photographed by the Hubble Space Telescope have a magnitude of around +30.

Let’s say that all passes brighter than magnitude 0 (so, any with negative values) are interesting for astrophotographers. Dimmer passes will not be that spectacular in photos, even though they are still nice to look at.

You also get a sky map with the trajectory of the ISS in the sky. If you’re not familiar with the positions of different stars in the sky, just use the cardinal directions on the horizon of the map (the outer circle). 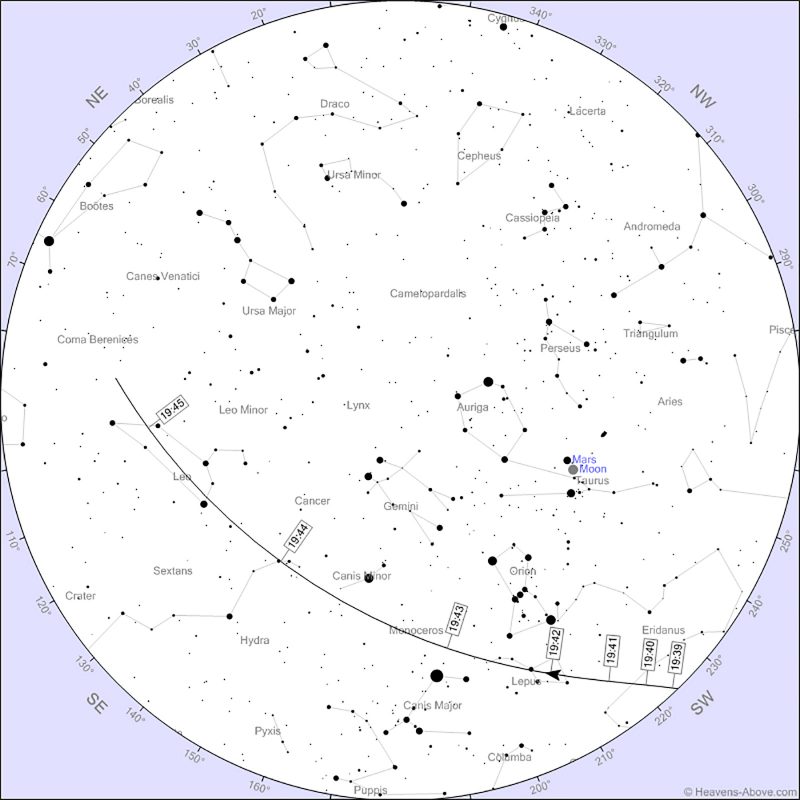 It will be very easy to spot the ISS moving if you look in the approximate direction of its appearance. Also, for your first photos, until you get acquainted with the night sky it should be sufficient to just roughly point your camera in the direction of the pass.

Lenses and setting up

You can use any lens that suits your framing: from 8mm through to telephoto lenses (if you want to capture a very small field of view). Telephotos are good if, for example, you want to photograph the ISS passing next to the tower of a church.

In terms of exposure time, you can choose to have shorter exposure times and preserve star roundness (use the 300 rule). Or, you can just use a longer exposure and keep the shutter open until the International Space Station exits your field of view.

If you shot short exposures in order to get round stars, you can then stack all these photos as separate layers in Adobe Photoshop and merge them using Lighten blending mode. This way, you will have the path of the ISS in the sky against a backdrop of nice round stars.

Shooting transits of the ISS in front of the Sun

Shooting the ISS with a wide-angle lens might be fun in the beginning, but it might get boring after some time as you will basically photograph a line between the stars. After you make a few more steps in astrophotography and invest in some more gear, you will be ready to photograph the International Space Station transiting the Sun or the Moon. I will talk about solar transits specifically, but pretty much everything applies to lunar ISS transits too.

As for the camera, you can still use a DSLR or a mirrorless camera. The faster, the better – and by fast I mean a camera with a high number of frames per second. ISS transits happen very fast and it’s one of the very few types of astrophotography where you need to photograph at high cadence.

A wonderful camera for shooting ISS transits is the Olympus OM-D E-M1 Mark II. If your camera doesn’t have a large buffer and it will be easier to shoot JPEG instead of raw files, go for JPEG.

You will also need a telescope and a tripod or an equatorial mount if you want to skip manually tracking the apparent motion of the Sun or the Moon in the sky. For solar transits, you also need a solar filter. Use a filter specially built for solar observations. The ones made by Baader a great.

What telescope to choose for photographing the ISS? Well, a focal length of at least one meter would be great, but you can do it with shorter focal lengths too. You can even use a 500mm or 600mm camera lens with a teleconverter.

The cool thing about photographing such transits is that you don’t even need an ED telescope to get decent photographs. A pretty basic 70/700 refractor is enough. You also need an adaptor to be able to connect your camera to the telescope.

A cable release is absolutely necessary for photographing ISS transits. There’s no other way around it. 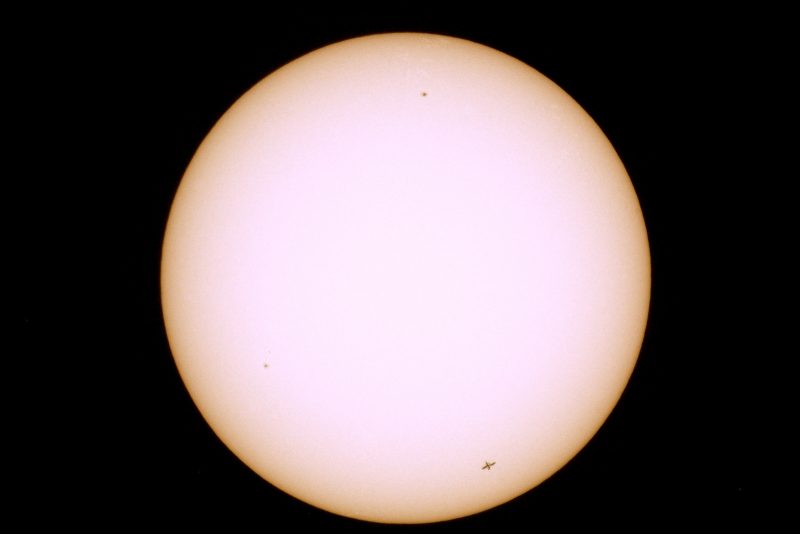 Successful ISS transit photography is a lot about planning. Like solar eclipses, such events are only visible from a narrow band and at a very precise time. And they last for a very short time: usually less than a second. So in order to get that tiny station in front of the Sun, you have to be in the right place at precisely the right time.

First of all, you need to find visible transits close to your location. For that, you can use the website transit-finder.com. You select your location, specify a search radius around that place, and you run the script. Here, I selected a time interval between March 13 and April 14, 2021. I randomly selected a location on the globe at 45 degrees North and 7 degrees East, at an elevation of 200m. I also selected the maximum search radius available on the website.

You usually have to travel a bit to witness such an event. If you’re not mobile, you could be waiting for a few years until a transit happens above your house. 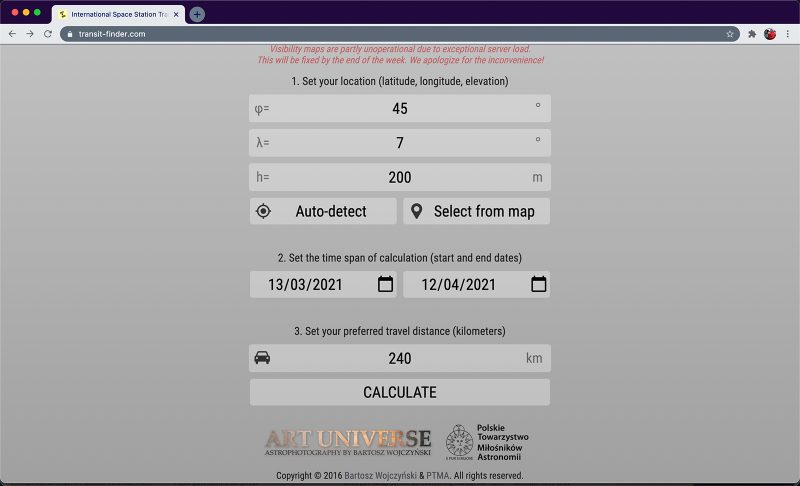 After running the script you will be presented with a list of future interesting events inside your search radius. 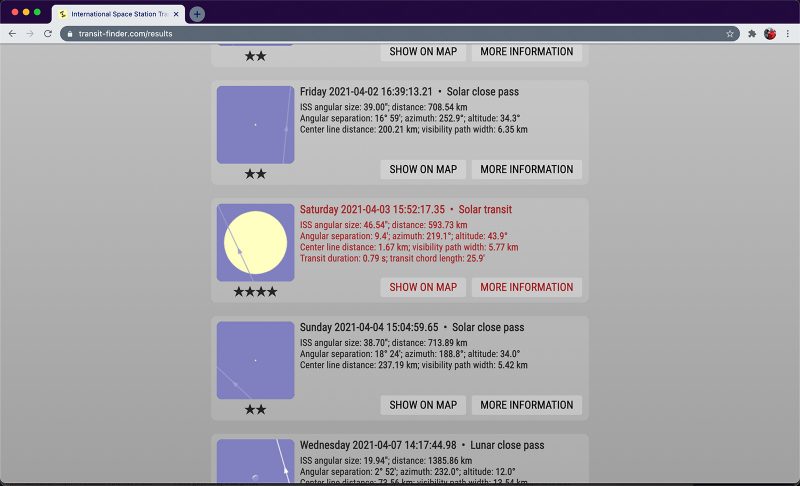 Most of the results will be close passes and you might have to wait for a few months until a transit occurs in your vicinity. In my fictional case, there’s a nice transit happening on April 3rd and pretty close to my location. From the table, we find out that the ISS will have an angular side of almost 47 arcseconds (the Sun has an apparent diameter of around 30 arcminutes – and one arcminute has 60 arcseconds. The ISS is tiny) and will be at a distance of almost 600km from my location at the time of the transit. The center line will be only 1.7 km from my location, and the visibility path will be only 5.77km wide. If I am to photograph this transit, I have to be inside this visibility path, preferably on the central line.

The website will provide me with a map of the visibility path: 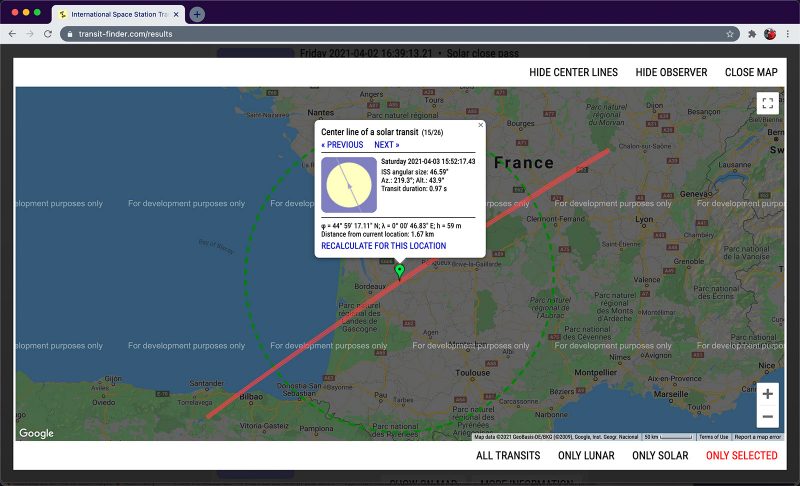 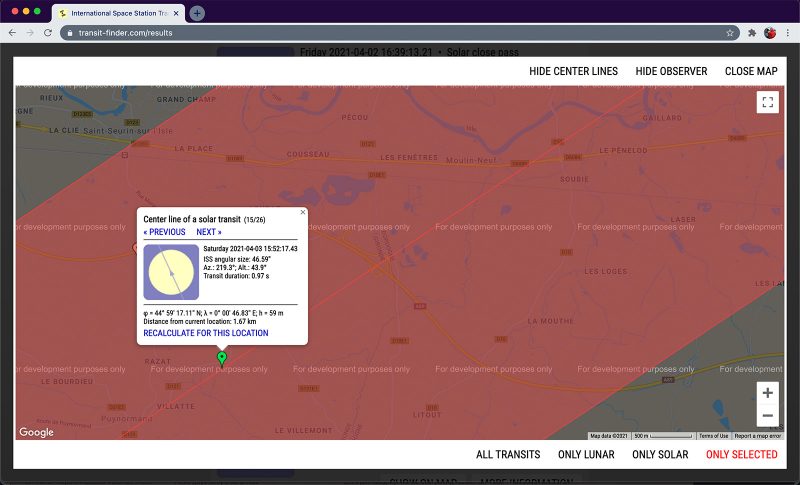 You now have to find a spot on this map where you can set up your gear and start shooting. Don’t just stop on the side of the road. Find a proper parking spot and walk a few hundred meters if needed. Your safety is paramount. Get to your chosen site at least one hour before the transit starts. You need time to set up your telescope, frame the Sun and do a few test exposures. It’s better to have more time than you actually need than to rush.

If you don’t have an equatorial mount, center the Sun in the field of view of your telescope no more than one minute before the predicted transit time and check the focus. Use the limb of the Sun or a larger sunspot for accurate focusing. Don’t touch the telescope until after the transit ends. Don’t forget to have your camera set to Burst mode. Also, you will need short exposures as the ISS moves very fast. Aim for an exposure time no longer than 1/1000th second.

10 seconds before the predicted transit time, start shooting. Keep shooting continuously until 10 seconds after the time of the transit. It’s safer to shoot for multiple seconds as there might be errors in the prediction. After 20 seconds of shooting, check your photos and you will hopefully have a few showing the ISS in front of the Sun.

You can combine some of the frames in Adobe Photoshop to show the path of the ISS across the solar disk.

And as a fun project, I suggest trying to identify different features on the ISS like modules, radiators, solar panels etc.