How to Photograph Birds in Lamington National Park, Australia 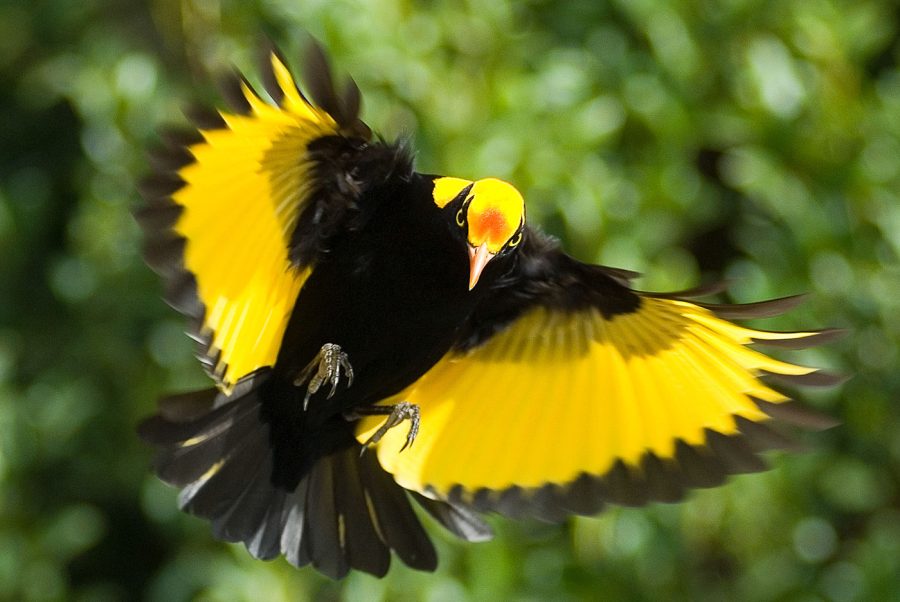 World Heritage listed Lamington National Park in Queensland, Australia is approximately a two hour drive from Brisbane, or a one hour and fifteen minute drive from the Gold Coast. Habitats within the park vary, including subtropical and remnant rainforests, ancient Antarctic beech forests, as well as some sclerophyll and eucalyptus forests.

The variety of bird species, therefore, is quite enormous. Many of the birds are used to the presence of people, so they can often be photographed at close range. There are around 245 species of birds found within the park, so it is easy to see why so many bird photographers travel there with their cameras from across Australia and the world.

Where to find birds in Lamington National Park

It is a good idea to pick up a track map of Lamington National Park from the local Parks and Wildlife Service Office, and familiarise yourself with the different tracks. Once you choose a track, I suggest spending a bit of time there, letting the birds get used to your presence. 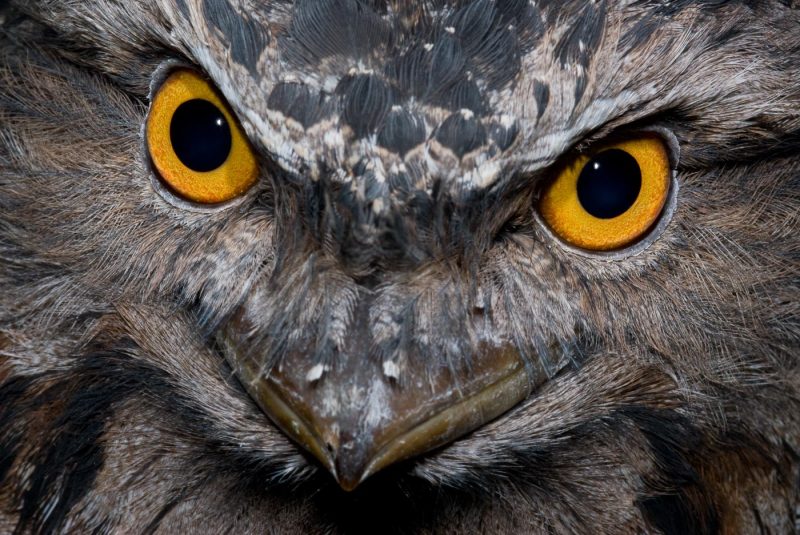 The Border Track, which starts right across the road from the entrance of O’Reilly’s Rainforest Retreat, is a perfect place to begin. Here you will find a number of ground-dwelling birds, including the Bassian and russet-tailed thrush, Australian logrunners, and the elusive whipbird.

These birds spend most of their time on the ground, searching for food and interacting together. By keeping still and silent, you will be surprised how close the birds will come to you. Two ground-dwelling species high on the list for bird photographers to try and shoot in Lamington National Park are the Albert’s lyrebird and the noisy pitta.

The Albert’s lyrebird is only found within an approximate 100 kilometre radius of the park. There are none in captivity and they aren’t found anywhere else in the world. Once they mature, the males of the species produce an incredible array of sounds. They are quite proficient at mimicking many of the different bird species in their territory, and do so with amazing accuracy. 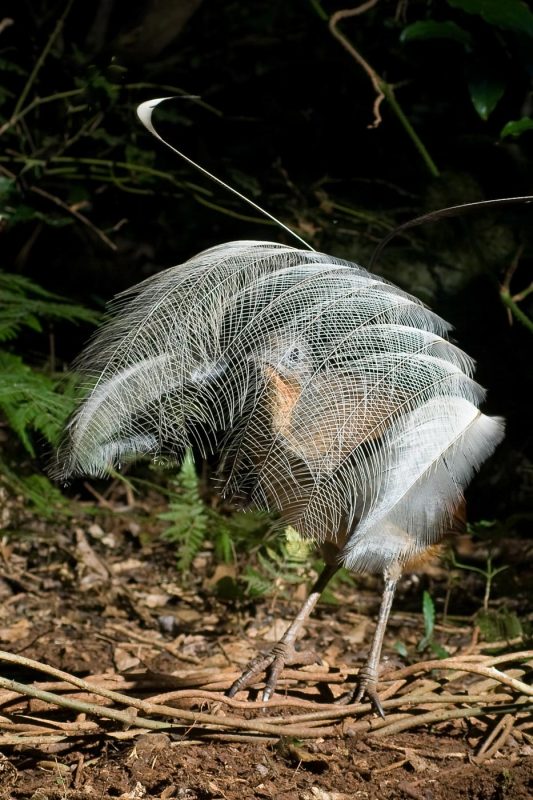 By walking along the boardwalk that takes you towards the tree top walk, you will sometimes see a lyrebird scratching the leaf litter, searching for insects. This is the time to take a few shots, while the bird is preoccupied.

The noisy pitta is one of the most beautifully coloured birds in Lamington National Park. They hop along the ground and are rarely seen flying. They will often land on the large buttress roots of trees, which make for a perfect background. Their call is quite distinct: it sounds like ‘walk to work’ but high-pitched, and they repeat over and over.

Use an app to identify birds

It can be quite daunting to turn up to a new area, such as Lamington National Park, and attempt to find birds to shoot. I recommend photographers purchase one of a number of Australian bird identification apps that are available for download. 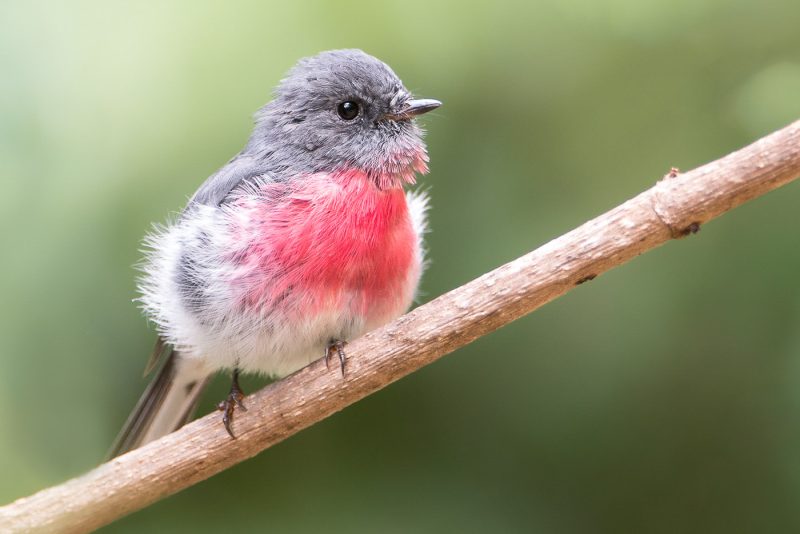 Personally, I am a fan of “Michael Morecombe’s Birds of Australia”. This app has paintings of every single Australian bird, including male, female, and juvenile, the regions where they are found, the nest and eggs, as well as the various calls each species makes. I wouldn’t be without it!

Use a monopod (or tree)

Quite a number of birds in Lamington National Park can be seen around the edges of the rainforest, or along the rainforest tracks. These tracks include the Border, Elabana Falls, Python Rock, and Moran’s Falls. As it can be relatively dark in these areas, you may encounter the issue of your camera’s shutter speed being too low.

Sure, you can raise your camera’s ISO to a much higher setting, but that inevitably leads to images with too much noise. I have been recommending to my photography workshop participants for many years to look at how you can stabilise your camera and lens in low light situations. 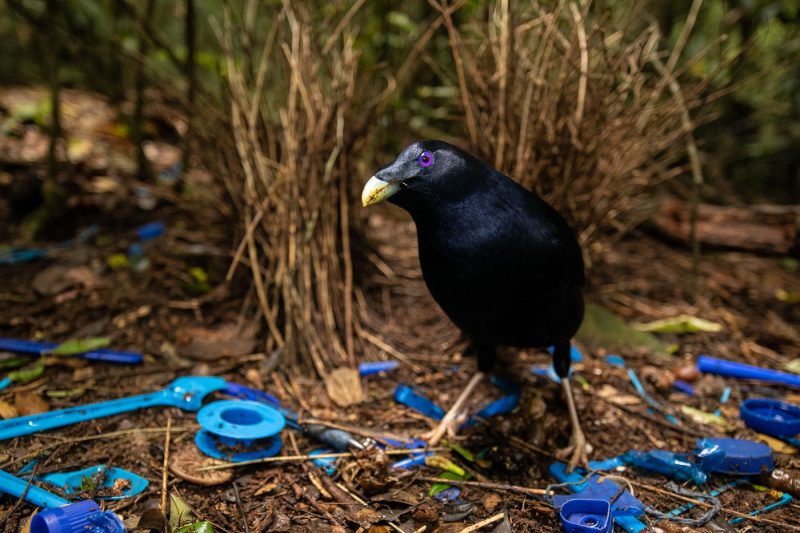 If you don’t own a monopod and are out and about shooting, you can also rest your lens against one of the many trees that grow along the various tracks within the park. This alone will greatly reduce any camera shake.

If it’s overcast and you are in a rainforest such as Lamington National Park, I suggest using evaluative metering (Canon), matrix metering (Nikon), or multi-pattern or multi-segment metering for all other brands. This metering is recommended as your ‘general’ metering for bird photography, especially in overcast, rainforest conditions. 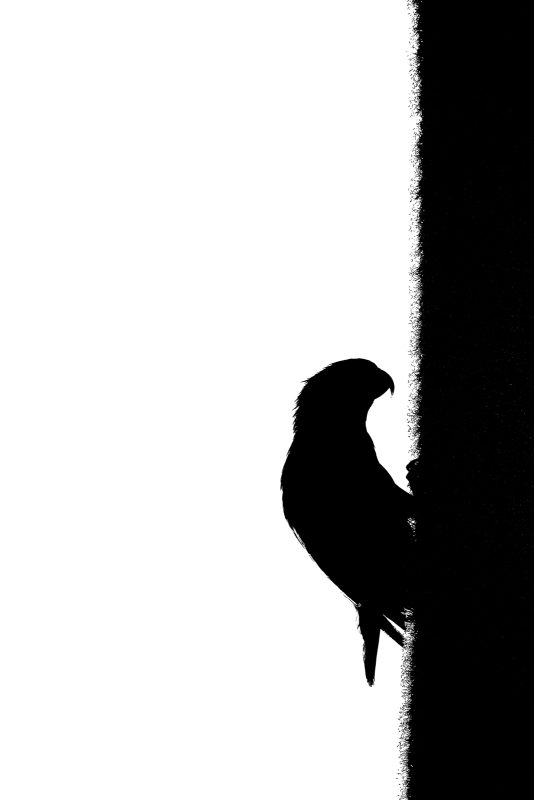 If, however, there is bright light behind the bird, spot metering (all brands) is recommended. By using spot metering, you are metering on the bird itself rather than the whole scene, therefore greatly reducing the chance of the bird ending up as a silhouette.

Once a day, O’Reilly’s Rainforest Retreat offers a ‘Free Flight Bird Show’. With a backdrop of trees, a stunning valley below, and photogenic mountains in the distance, you have an incredibly beautiful backdrop to shoot the birds against!

The birds on display in the show include the barn and barking owl, nankeen kestrel, black kite, and wedge-tailed eagle. As such a large and fairly slow-flying bird, the wedge-tailed eagle is the perfect species to practise your in-flight techniques. 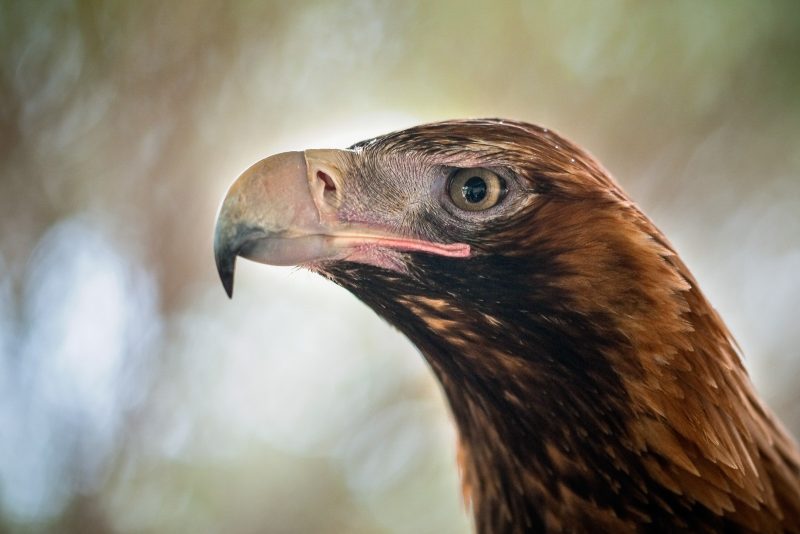 By using the continuous focus setting on your camera, along with with burst shutter mode, your chances of success in capturing that split-second moment are much greater. Species such as the barn and barking owl will happily sit in one spot, so you have plenty of time to properly compose your image and adjust your camera’s exposure settings.

Spring is the best time to visit Lamington National Park for bird photography opportunities (September, October, and November here in Australia). There is so much activity going on: birds calling for mates, displaying regularly, or raising chicks. It is no wonder that this park is one of my favourite places to visit in Australia for bird photography.

Other times of the year are quite decent for photographing birds too, but Spring is when you will find the most birds around.

Here are some of my recommended species to find whilst you are in Lamington National Park.

Both of these stunning birds frequent the area in front of reception at O’Reilly’s Rainforest Retreat. The males take approximately 6-7 years to colour up and, once they do, their plumage is quite striking! 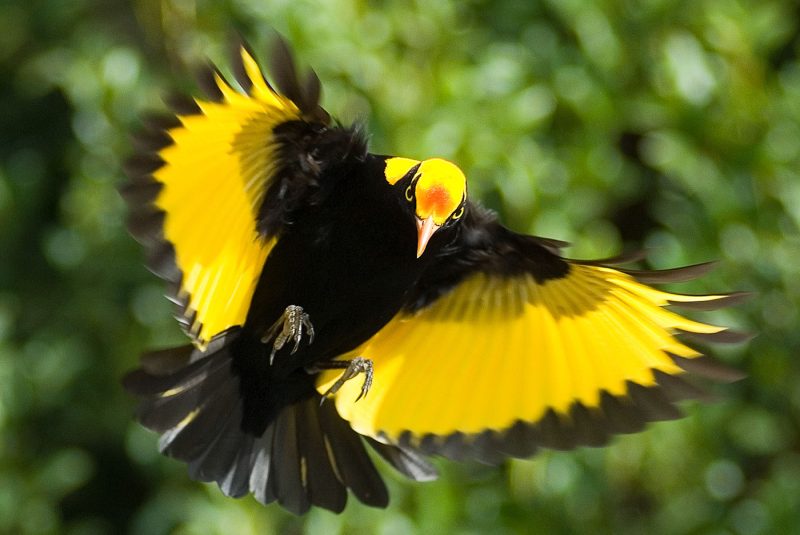 The native grevilleas that grow either side of the reception entrance are favourite landing sites of the bowerbirds. This means you are close to eye level with the birds, and makes for the perfect angle to photograph them.

As there is a building close to where the birds land, care needs to be taken not to include this distraction in your photo. By simply moving a metre or two to the left or right, you can end up with foliage in the background. This makes for a much more pleasing image.

While you are at the front of the reception area, photographing the satin and regent bowerbirds, you will often see the eastern spinebill hovering like a hummingbird, feeding on the nectar of the native grevillea bushes. 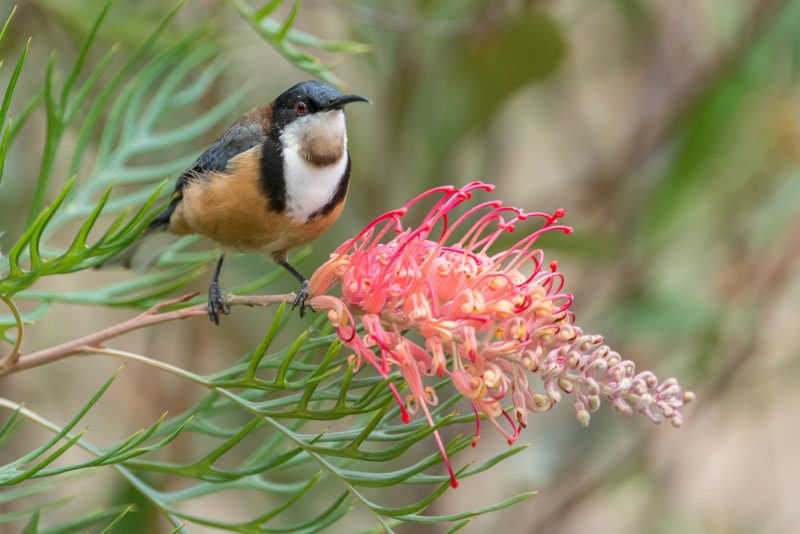 You need to make sure you use a shutter speed of at least 1/2000th of a second (or higher), especially if you wish to ‘freeze’ the eastern spinebill’s wings while it is hovering over the flowers.

The eastern yellow robin is a common bird in Lamington National Park and can easily be photographed along the various tracks, including the Border, Python Rock, and also around O’Reilly’s Retreat.

The key characteristic to look out for with these birds is that they will regularly land vertically on the side of a tree, rather than horizontally on a branch. By turning your camera to portrait, you should be able to get some decent images of these birds, often with a blurred-out background.

King parrots, with their incredibly bright scarlet red and green colouring (males), and crimson rosellas, with a mixture of crimson and blue, are very easy targets for you to photograph. Having been fed bird seed for many years now by visitors, the birds are incredibly tame and used to people, so you don’t need a large focal length zoom to photograph them. 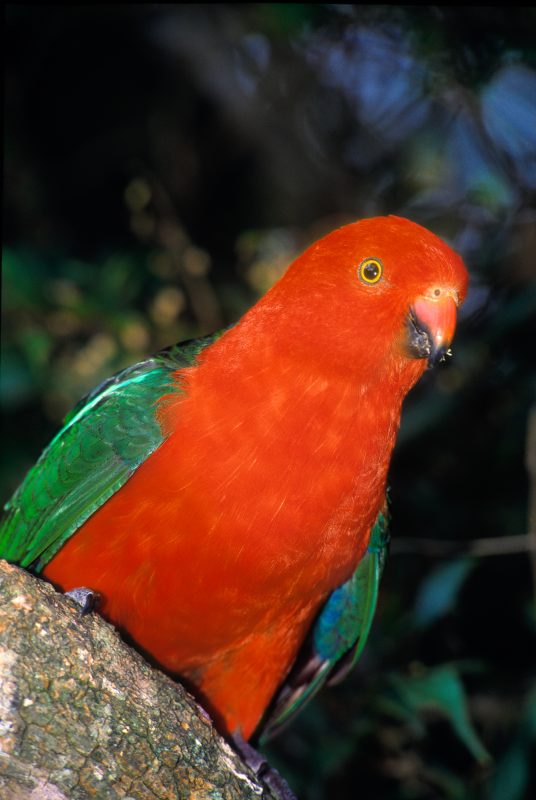 There is a bird feeding area 50 metres from the reception area of O’Reilly’s, where the birds often congregate. With established trees within the bird feeding area, you don’t have to worry about man-made structures ruing your shots.

Along the boardwalk that leads to the treetop walk, especially early in the morning, you will often see LBBs (little brown birds). This is the nickname given to the smaller species that look similar to each other. Species include the yellow-throated, white-browed, and large-billed scrubwren, the brown gerygone, and the brown thornbill.

These tiny birds are most often either on the ground (or within a metre or two of the ground), or in amongst the foliage. Once again, due to regular daily visitors to the park, these birds are totally relaxed and make for quite easy photography.

Just remember to increase your camera’s shutter speed, shooting wide-open (widest aperture in size), and use a higher ISO. Alternatively, use an external flash for added light.

Read more: Choosing a Camera Mode – Which is Best?

Both the rufous and grey fantail are regulars in Lamington National Park. They are essentially flycatchers, so can regularly be seen hovering amongst the greenery, catching insects ‘on the wing’. They are especially common along the wooden boardwalk that leads you to the tree top walk.

The fantails can be difficult to photograph in mid-air as they are flying, so I recommend zooming wide, finding the bird, then zooming in closer with the bird in your sights. A fast shutter speed is again needed to capture pin-sharp shots of these birds hovering and flying.

Without a doubt, Lamington National Park is a must-see location for bird photographers. With the amazing array of bird species found here, coupled with stunning scenery, you won’t regret visiting!