I’m slightly guilty of fitting a story around a title for this article! But I couldn’t resist it, and once I started thinking about ‘red’ wildlife, I was surprised at just how many shots I already had.

Perhaps there’s something in colour psychology that explains why we use the word ‘red’ to describe many of our British animals. Or possibly it’s just easy shorthand for a broad range of colours with a tinge of red, orange or brown that many animals happen to fit.

There’s one thing for sure: shooting in October when the light rakes low and stays golden for much longer than in summer delivers a visual bonus for any wildlife photographer. At this time of year, I tend to use the ‘cloudy’ white balance setting all the time, as it brings out colours that little bit more, without resorting to over-saturation. Sunrise and sunset pictures might need even warmer colour temperatures than this to avoid those fantastic oranges, reds and pinks from becoming too blue.

I should say that one of the main problems with wildlife photography is finding the wildlife in the first place. This has been made much easier with the internet, from which you can research locations easily. Specific groups on Facebook, for example, can connect you to people who already know where the animals are in your local area. This information is gold dust and saves a huge amount of wasted effort.

Just before I finished writing this article, my good friend Alan Hewitt asked me if I would like to go and photograph the red deer rut. Mid October is ideal, with the colour of the trees, the quality of the light and the testosterone-fuelled stags. Well yes, Alan, I would indeed. I’ve collected some of my favourite autumn images that evoke this special time of year, and have described a little about each photograph underneath. 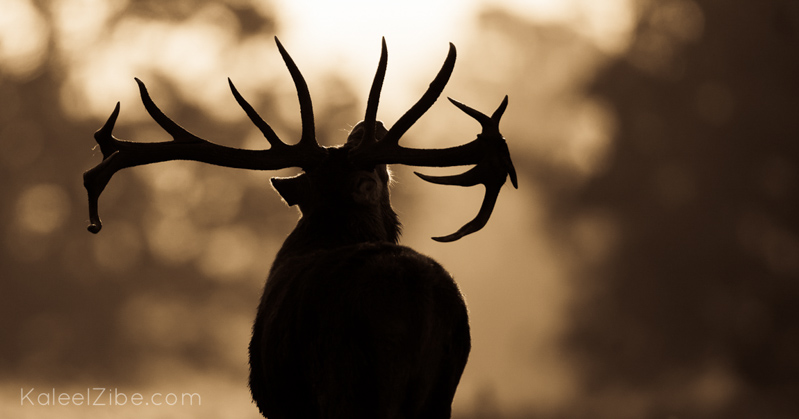 October is a great time to catch red deer rutting. However, please exercise extreme caution. Don’t get too close to these hormone-addled stags, which can be highly aggressive. This image was taken with a 600mm lens and a 1.4x converter at Studley Royal Deer Park, in Ripon. As you can tell from the resulting 850mm focal length, this gave me a nice working distance without inciting the animal to rage.

It is best to arrive before dawn and search for the deer so that you’re ready for the best early morning light. In deer parks, my experience is that animals are aware of you, but are accepting as long as you don’t encroach on them too much. It’s also advisable to not wear camouflage during the rut, partly because it’s better for the deer to be able to see where you are rather than be suddenly spooked by you; but also because keepers might be culling deer. The last thing you want when you’re photographing deer is to get shot because the keeper didn’t see you behind the herd!

Don’t be scared of back-light. I go a bit weak at the knees for a nice silhouette! The sensor of a digital camera can’t capture the full dynamic range of this sort of scene, but you can use this to your advantage by underexposing the deer to create a really evocative, back-lit image. Be careful not to overexpose the foreground and therefore blow the highlights of the background. In a way, this is contrary to the usual advice where you expect to expose the foreground (the deer) correctly and hope the background doesn’t over-expose too much. In this case, you’re deliberately exposing for that bright background so that you capture a smooth range of tones and the lovely warmth of the light. The animal may be completely black, or very dark and, if you’re lucky, with rim-light visible on the beast’s fur.

If you find that your highlights are over-cooked, back off the exposure with your exposure compensation control, or use manual exposure. Another trick is to point at a bright part of the sky and use the exposure lock button. Then you can point back at the stag with the exposure correctly set for the back-light. 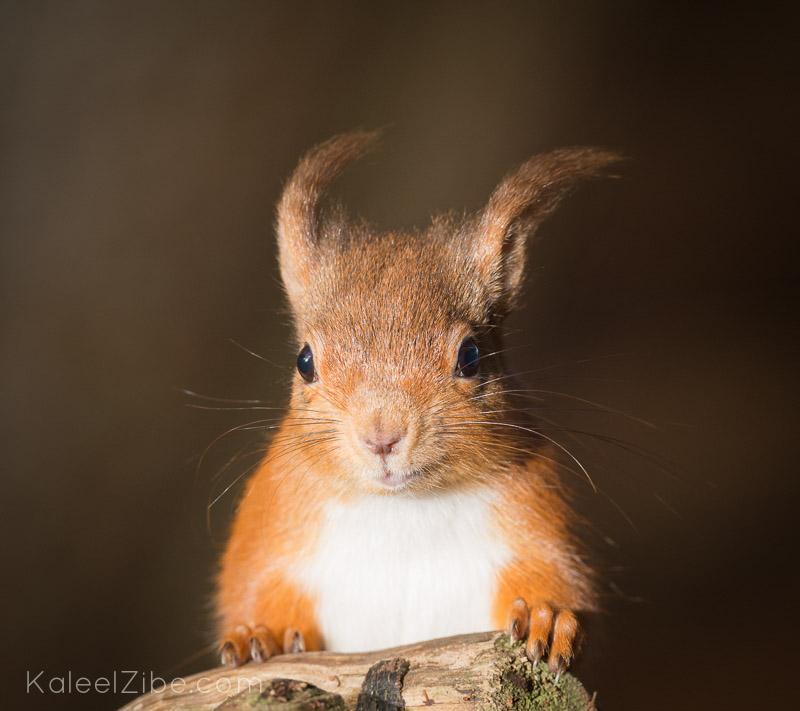 I like to call this shot ‘Windy Day’! Those ear tufts are fantastic, aren’t they? In fact, they’re one of the identifying features of red squirrels when compared with greys, and are particularly evident in autumn and winter. Here in the UK, our indigenous reds are under intense assault from the introduced grey squirrel, and the squirrel pox they carry. Where I live, we’re right on the front line in the battle between reds and greys. Conservation projects work really hard to help the reds, but it’s heart-breaking when the squirrels you photograph are dead a fortnight later. Thankfully, as far as I’m aware, Mr. Windy Day is still at large, although he’s under significant pressure for his survival.

For this shot, I used my beloved 300mm f/2.8 prime lens on the equally beloved Nikon D4. f/8 gave enough sharpness on the squirrel, while pushing the background into a beautiful blur. 1/400 sec with ISO 400 was sufficient to allow hand-holding, which meant I could follow the animal’s movements easily. Red squirrels are often a hard species to find, but taking a trip up to Scotland will give you the best chance for seeing them! 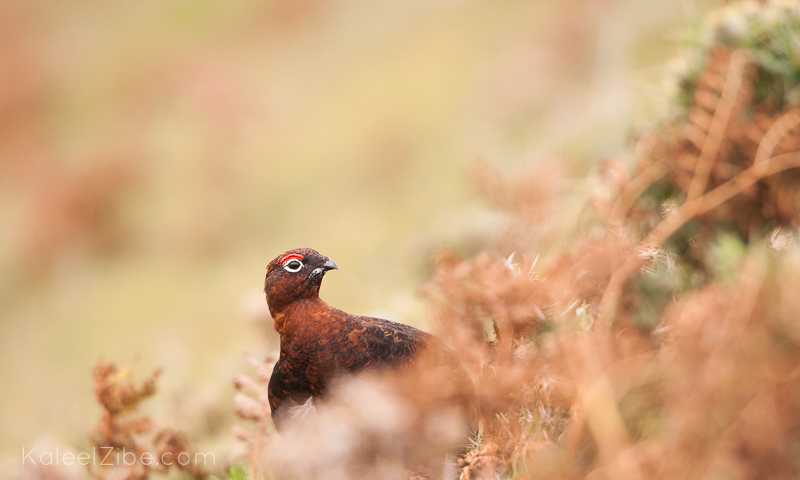 In Britain, we have a large number of red grouse on heather uplands. I’m not a fan of shooting anything (except with a camera), but the up-side of a landscape managed by shooting estates for this pursuit is that there are plenty of grouse. And they’re actually very good looking birds, particularly the males with their red ‘eyebrows’ inflating when they’re excited or angry.

I find red grouse are best photographed by using a car as a hide (blind). I’ve had a lot of success simply driving around on moorland roads in northern England where the grouse can be heard bubbling and gurgling away near the roadsides. I then poke my lens out of the window, using a beanbag for support. Red grouse feed on heather, and this typical habitat of game birds makes for lovely, colourful backgrounds.

I like the composition of this image and the way the bracken and grass is rendered to mush around the bird with the shallow depth of field. This gives an impression of habitat whilst not detracting from the grouse, which is sharp and pops out from the smooth background. 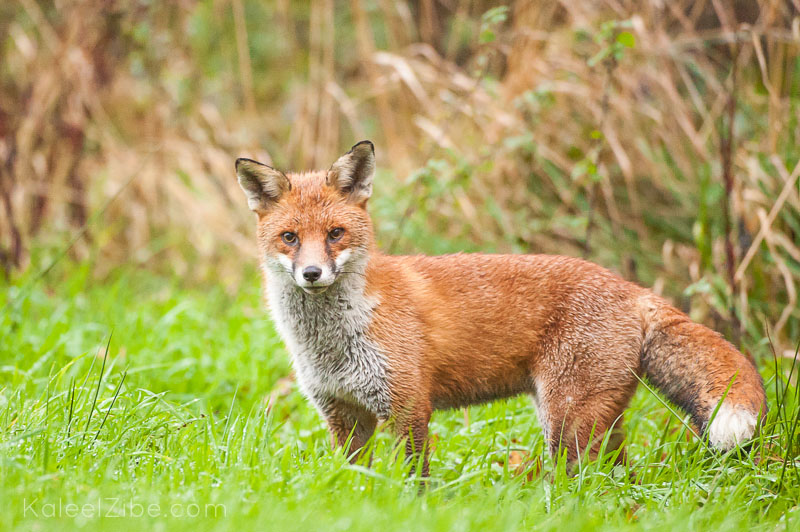 The story behind this fox picture is very special to me. A housing developer had put in a proposal to build 600 houses on protected green-belt land next to a wildlife reserve close to where I live. I was trying to get images to show that the animals from the reserve have no concept of the artificial boundaries we impose upon them. They frequently forage on or venture across the land where the houses were to be built, and this shows it is integral to their survival.

I set off about an hour before dawn and sat in full camouflage with my back against a tree; long grass obscuring the camera. The hope was to photograph the badgers that I knew used that field corner. Before dawn broke, I could hear a jay squawking behind me and a roe deer trotted across the field diagonally in front. It then walked behind me, completely oblivious. So far so good.

Shortly after that, a beautiful fox appeared along the field edge, sniffing around and gradually approaching towards where I sat. It sauntered around, occasionally staring at the place where the unusual clicking noise was coming from (my camera shutter) and eventually wandered off. I believe to this day that the fox had no idea what I was and certainly didn’t see me as a threat. I’m sure it could smell me, but I was delighted to learn that I could sit a few metres away from such a magnificent wild animal and not scare it off.

In the end, with others, I contributed to the proof that foxes, deer, badgers, weasels, birds, bats and other animals used that land and the developer was declined permission for the houses.

The shot was taken just about at the limits of what I could get away with in that pre-dawn light: ISO 5000 ensured just enough shutter speed at 1/60 sec with the 200-400mm lens wide open at f/4 at the long end.

I’ve taken a lot of pictures of red kites and this is one of my favourites. Having been involved in conservation projects for red kites near my home in north east England, I have a lot of close-up shots of these large raptors as they’ve been wing-tagged and leg-ringed. However, this shot was taken in Dumfriesshire, south west Scotland where over 100 wild kites visit the feeding station in winter – many more than in summer where food is more plentiful in the wild. This is an awe-inspiring sight as you can probably imagine, although catching just one of these fast-flying acrobats requires split-second timing and good focussing skills.

For this particular shot, I pre-focussed just above the feed table and fired the shutter as a kite came through. I needed quite a high ISO of 2500 to get 1/800 sec at f/11. Why f/11? Well, I could have used f/4 and a lower ISO, but I find birds in flight are best shot between f/8 and f/11 to get enough depth of field front to back across the bird.