How to Photograph the Deer Rut in Richmond Park

Following the extinction of many of Britain’s most impressive large mammals, red deer are often in the spotlight as our largest and most charismatic creatures. Whether it is a glimpse on the windswept moors of the Scottish Highlands, or a more personal encounter in London’s Royal Parks (such as the famed Richmond Park), a majestic red deer stag never fails to feature in our photographic bucket lists. With the latter location being more accessible and familiar to most, I will give my best tips on how to photograph the autumn deer rut in these urban paradises. 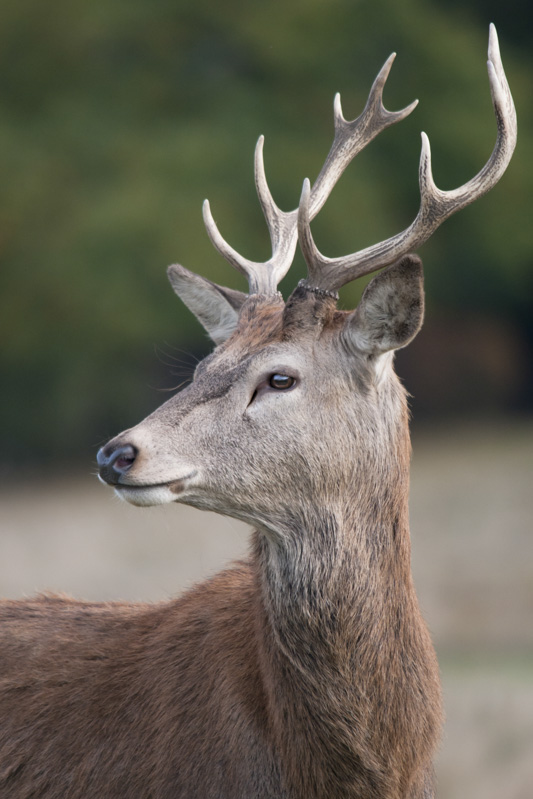 First off, knowledge of the behaviour of rutting deer is one of the most important factors when it comes to rut photography. The rutting season is essentially the mating season for red deer, taking place from September to November in the UK, and peaking at the start of October. It is the time when the males (stags) give it their all, battling each other in order to win the rights to mate with the females (hinds). The hinds form groups called harems, which are controlled by a single stag at any one time. This reign is the coveted prize of the shoving matches the stags carry out. It is crucial to be able to recognise the events leading up to this, so that you can prepare yourself and your camera. When a new stag arrives at the scene, there is immediately tension in the air between them. They slowly start to walk towards one another, and then walk parallel to each other, just a couple of metres apart. The purpose of this is to size each other up, as if one of them clearly outweighs the other it is obvious who the winner of the harem will be and no blood needs to be spilled. Parallel walking is the perfect warning for you to get ready for some potential action! During the fighting, the deer interlock antlers and push each other until one eventually admits defeat. Sometimes the duo are so focussed on their battle that they fail to notice a younger, smaller stag (known as a satellite male) running in and mating with their harem! All of this fascinating mating behaviour can provide an amazing subject for you photos. 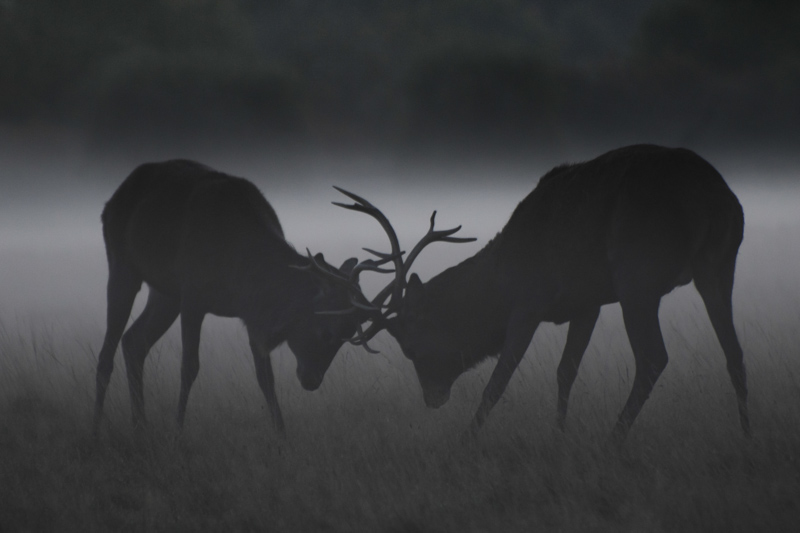 Yet another precursor to a rut is bellowing. Stags try to scare each other off by calling as loud as possible, which usually correlates with their fitness so that the stronger of the two males can be agreed as to who the winner is without coming into contact. Another purpose for it is to trigger the hinds to come into season for mating, which the stags sense by sniffing the air around them. Listening out for bellowing (sounds like a low vibrating belch) is a great way to track down a harem of deer and a fine looking stag. 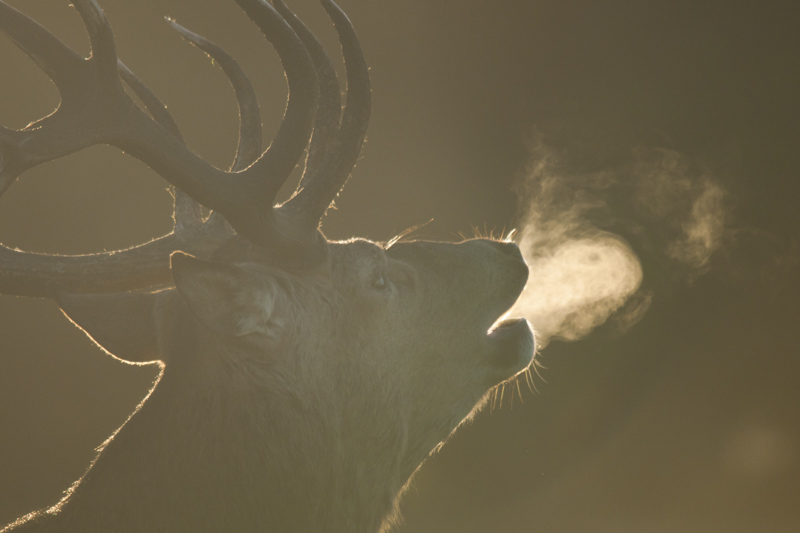 A more quirky aspect of the deer at the time just before the rutting season is the death of living tissue on their antlers. The stags can often be seen rubbing their antlers against vegetation to scratch off the velvet that resides on them attracting unwanted parasites. This can often lead to the potential for some amusing and surprising photos, such as stags with crowns of bracken tangled in their antlers! 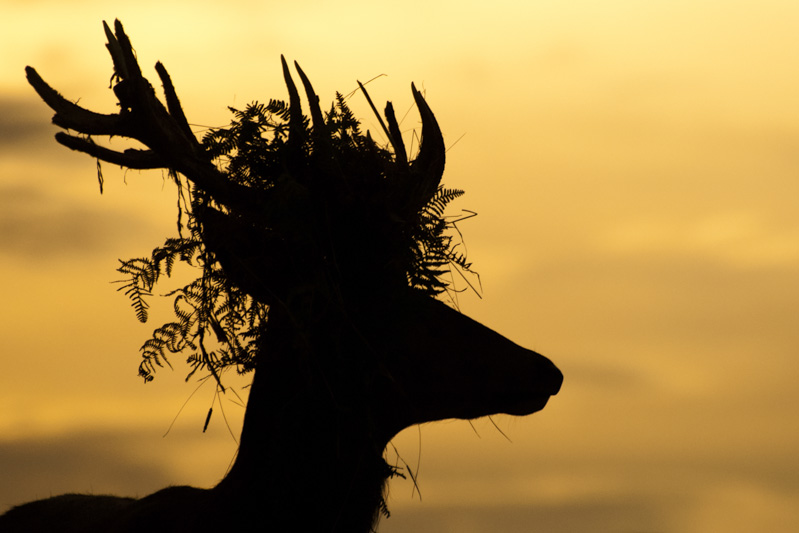 Your understanding and your use of light is crucial for deer photography. The many different aspects to their character can be expressed in a photo with different techniques. As a general rule of thumb, the most stunning conditions occur at dawn. On a perfect autumnal morning, you could hope for a combination of a deep orange light with a thick mist collecting in the lower reaches of the Park. This time of day also coincides with the peak deer activity, therefore I thoroughly recommend making the ridiculously early start to get there on time. The dawn light can be used in 3 different ways: back, front and side lighting. Back lighting can either be used to create a halo effect around the deer, emphasising the hairs around the body, or can be used to silhouette the deer if the light is not directly shining on their back. This can be used to bring out the sharp shape of the deer’s silhouette, especially effective for the stags’ antlers. Side lighting can be used to bring out a more sinister appearance to the deer and front lighting reveals the deer’s features in all their glory. I find that as the morning goes on, the light becomes too harsh to take pleasing shots of the deer. However, I’ve found myself using it dappled in the forest at this time, creating a fairytale-like effect through the trees. 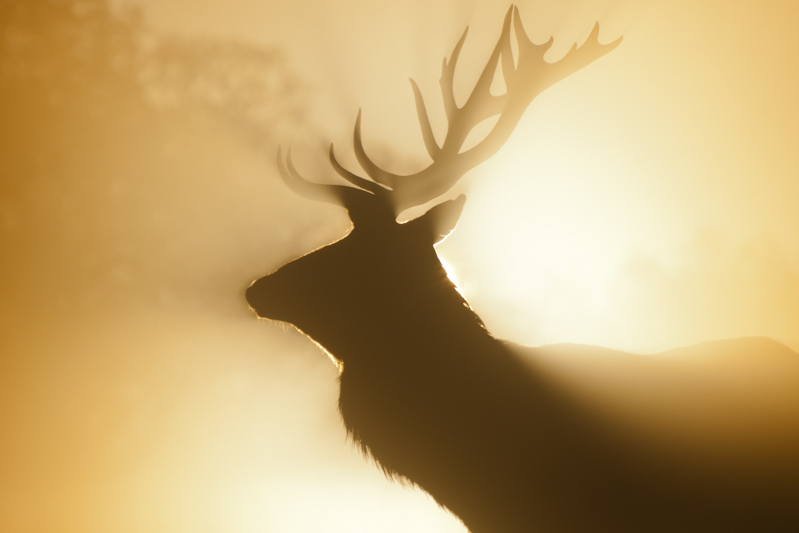 Approaching deer in the rut in Richmond seems very straightforward as the deer can be so easily approached when they are distracted with mating. However, care must be taken as the stags are very aggressive at this time of year. When the animal seems relaxed (i.e. not on edge and staring right at you), it is usually safe to slowly move another metre closer. If you get down on all fours, you not only appear less intrusive, causing the deer to feel more comfortable, but you also get a photo from a more unusual angle. When stalking deer, it is crucial that you remember to always prioritise the welfare of the animal over simply getting the shot.

In places like Richmond, deer are much tamer than in the wilderness of other parts of Britain. This provides obvious perks for photographing them, but there are some disadvantages to these kinds of locations. On countless occasions, I have had some of my favourite photos being ruined by the background. In Richmond, there is nearly always a distant tower block, a person walking their dog, a cyclist or most annoyingly, tree protection structures. The fencing around the young trees manages to sneak into many photos without you noticing, but they can ruin backgrounds by transporting the viewer of the photo from their image of wilderness in their head, back to a park in London. So, be careful to pay attention to your backgrounds and don’t be distracted by the beautiful stag in front of you. Moving a metre or so to the left may fix a problematic background. 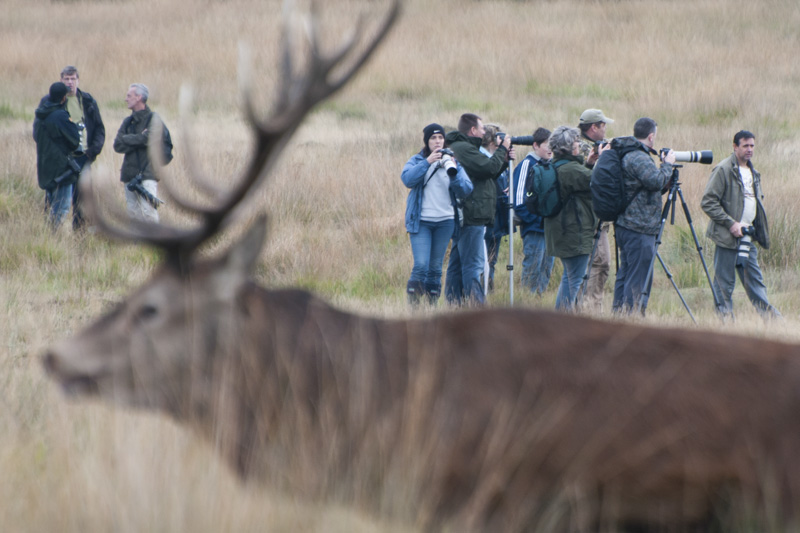 Of course, many of us don’t live near London, so take a look at this page to see the main areas of Britain where red deer can be seen, with the most reliable populations being found in South-West England, New Forest, the Lake District, East Anglia and most of Scotland.

That’s all from me, good luck with your deer rut photography! If you do head off to the rut this year, feel free to post an image or two in the comments below.